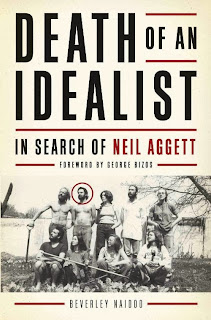 Historical fact? Or Historical fiction? It depends on who tells the story. I grew up with History books so slanted toward a single viewpoint that they were almost subversive, but at the time I believed they recorded the absolute truth.

When a young doctor of 28 was found hanging in his cell while under the 90 day Detention Act which allowed prisoners to be held without recourse to a lawyer or trial, and which could be re-instated for another 90 days as soon as the first ran out…. was this suicide? Was it assisted suicide? Or was it murder? Had his interrogators tortured and killed him and made it look like suicide, or had he in fact taken his own life?

What is fact? What is fiction? Either way he died in police custody.

In Parliament in South Africa, in 1982, the Minister of Police, Louis le Grange, announces… "the detainees in police cells or in prison cells are being detained under the most favourable conditions possible… All reasonable precautions are being taken to prevent any of them from injuring themselves or from being injured in some way or from committing suicide."

Two days later, Dr Neil Aggett is found hanging from the bars of the steel grille in his cell in John Vorster Square. He has spent 70 days in detention. He is the 51st person and the first white person, to die in detention. This is fact.

In the week after his death, 90 000 workers down tools and hold a national half hour work stoppage. 15 000 workers, more than 200 nurses in uniform from Baragwanath, the black hospital (hospitals were segregated then) where Neil worked, together with his friends and family follow the coffin on its seven kilometre journey from St Mary’s Cathedral in Johannesburg to the cemetery of West Park. The city comes to a standstill. No funeral for any South African statesman has ever made a greater impact. This is fact.

Beverley Naidoo's book, DEATH OF AN IDEALIST, explores the journey of the sports loving schoolboy who became a doctor and then an unpaid trade union organiser whose life ended so abruptly. The photographs in the book show a bright open-faced boy staring out from the page with his tennis and cricket teams. And later photographs of him with his friends on their vegetable co-operative, growing cabbages, looking like true 70's hippies.

A friend of Neil’s in the audience at the London launch of DEATH OF AN IDEALIST, said the following:

· The foundations of a civil society are based on individual accountability for moral, ethical issues. Neil’s fundamental idealism was to do good in the world and to live a simple and generous life.

· Neil’s story reflects the capacity an individual has to mobilize others out of apathy… an apathy that is becoming more obvious in present societies.

· Prisons are a world of total institutionalization, not only for detainees but also for the police who act behind impervious walls, where even good people are capable of bad acts.

Beverley Naidoo, who herself was banned from South Africa in her early 20’s and whose first youth novel about two children who travel to the city to find their working mother, Journey to Jo’burg, was banned in South Africa – a first for a children’s novel set there – has written a poignant story of a family bewildered by their son’s death and the political furore it caused.

DEATH OF AN IDEALIST is as much the story of a remarkable young man as it is a reminder that every generation needs its idealists.

In Beverley Naidoo’s hands Historical fiction is explored against the template of Historical fact.

Thanks. This is an excellent review. I don't tend to think of historical fiction as so recent, but of course this is history, after all.

How interesting and moving. I had never heard of Neil Aggett and am very glad to know that Naidoo, a writer I hugely respect, has written the book. Must get it. Thank you, Dianne, for drawing it to our attention - and so true about the dangers of apathy!