It's no secret that I find having a sleeping cat near me when writing to be both soothing and inspiring, in equal measure.  When I've read about how, in medieval scriptoria, monks shared their literary space with cats, I've thought, Aw, that's sweet - them and me and our furry muses ... not thinking about any other reasons to keep a cat.  I know the Pangur Ban poem which begins -


I and Pangur Bán, my cat
'Tis a like task we are at;
Hunting mice is his delight,
Hunting words I sit all night.

and still I didn't twig.

It's obvious, of course.  Medieval monks, working away at their beautiful illuminated manuscripts, had enemies other than just Nordic types going a-viking.  They were painstakingly inscribing their letters and images onto lunch. 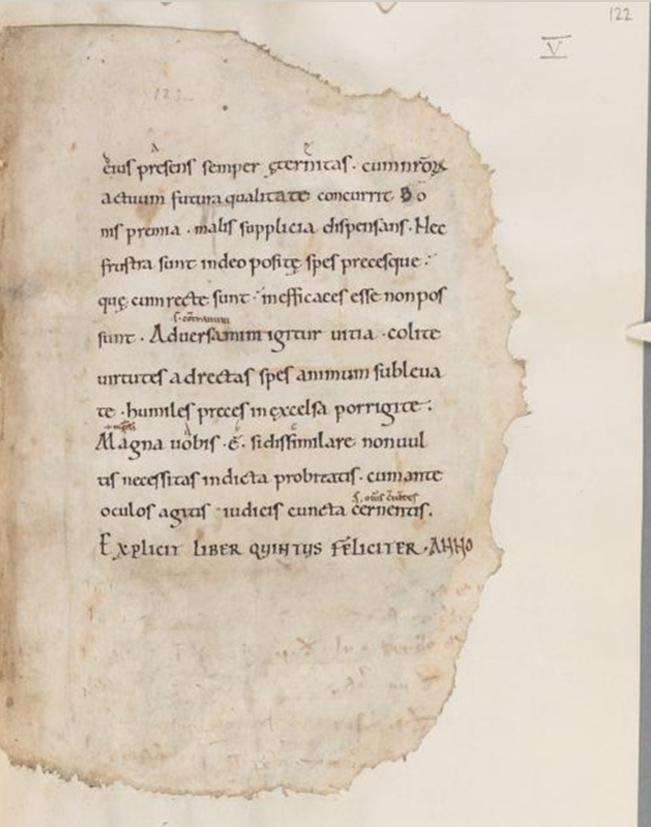 That manuscript has been thoroughly gnawed and nibbled on.  (Though the mice have shown a certain restraint.  Or is it just a question of generous margins?)  It was, therefore, an excellent idea to have in your scriptorium at least one cat.  Some, perhaps, larger than others ... 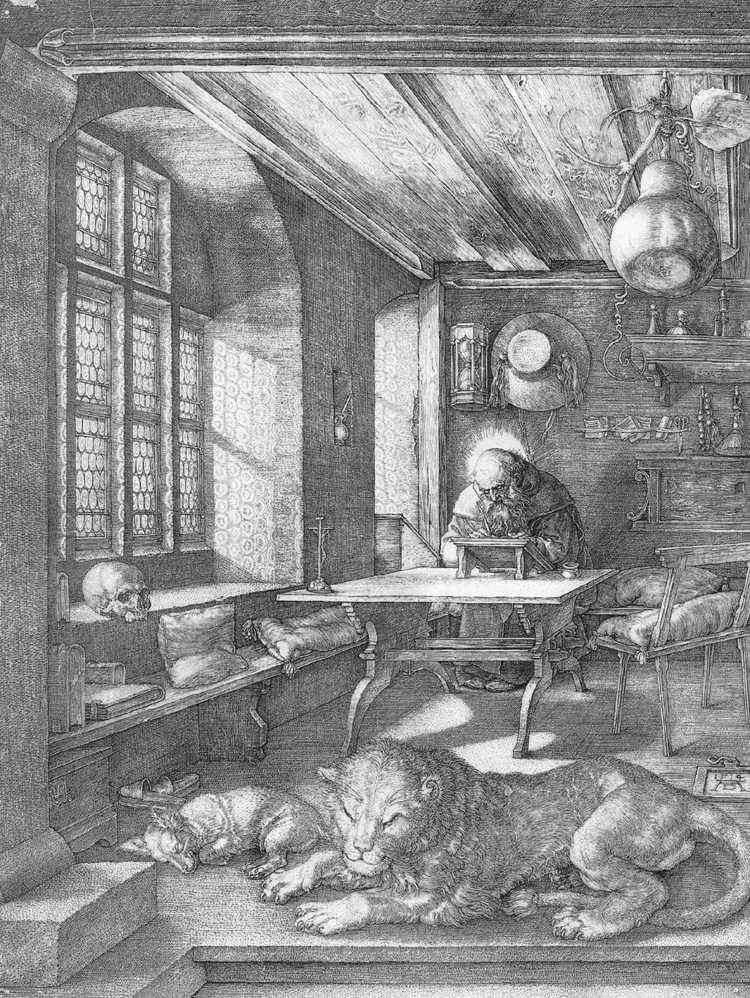 But, as anyone who's ever tried to shoo a cat off a keyboard will know, cats and writing do not always go together so peacefully.

Inky paws skitter across the page - or sometimes something worse ... 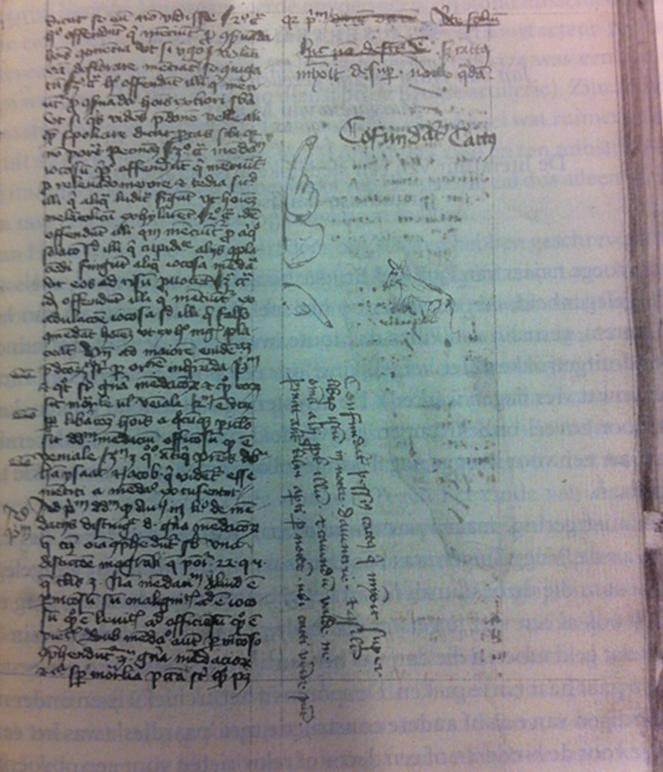 Make the image a bit bigger - that's a cat the cheesed-off monk has drawn, not a donkey, and those accusing fingers are pointing at potent, pongy, moggy pee.  It's enough to make a good man curse.

Hic non defectus est, sed cattus minxit desuper nocte quadam. Confundatur pessimus cattus qui minxit super librum istum in nocte Daventrie, et consimiliter omnes alii propter illum. Et cavendum valde ne permittantur libri aperti per noctem ubi cattie venire possunt.
Here is nothing missing, but a cat urinated on this during a certain night. Cursed be the pesty cat that urinated over this book during the night in Deventer and because of it many others [other cats] too. And beware well not to leave open books at night where cats can come.
Well, it's good advice.  Vermin and vellum may not mix, but cat pee really doesn't enhance anything at all.


P.S.  It was not only monks who had grudges against cats.  If, instead of nibbling the vellum, the vermin had engaged in some art work of their own, they might very well have come up with something along the lines of this 18th century Russian print - 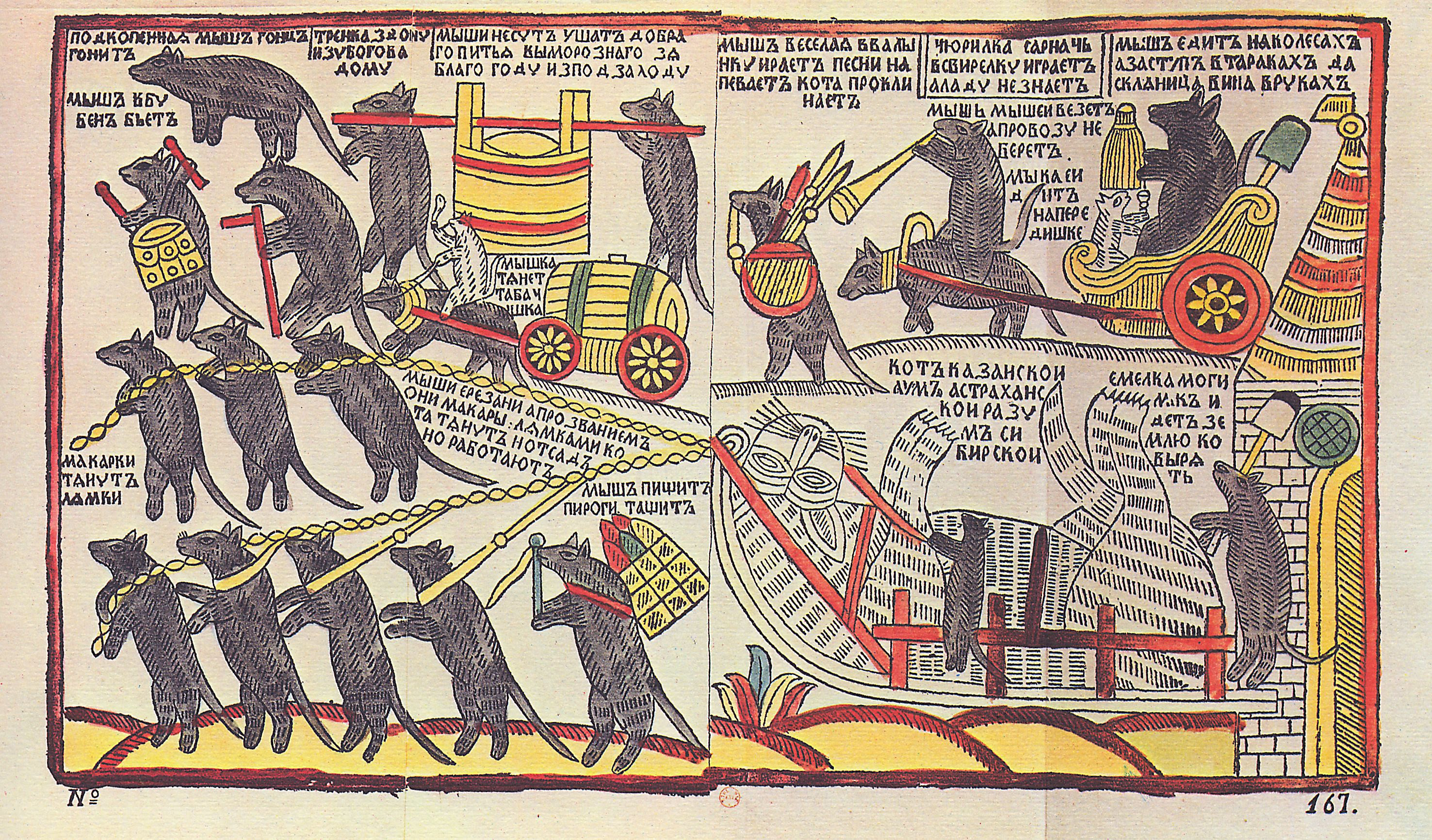 I'll not be showing this to my cat.  She's a sensitive soul.
Posted by Joan Lennon at 00:30

what a delightful post. Thank you!
I wonder if the angry monk was actually offended by the cat's editorial comment, as I am sure that's what it was.
I type this one-handed, with the other hand in among my cat's belly fur. The love of a good cat is essential to so many writers, isn't it?

Brilliant post, Joan - and as I've just shooed my cat off the table, where she has left a set of muddy pawmarks on the white cloth, apposite!

Lovely post - and feeling somewhat soothed now, having started the day with a cat "discovery" in a corner of my room, although it may have been a midnight visitor, not Cat who is sitting with tail neatly round her paws on the scribbling file I rather need to open.

I do like that joyous parade of happy mice, Joan!

Cats didn't used to like sitting watching TV or computer screens as the old ones where moving and they didn't see what we saw. But the new screens have meant my cat sees what I see and if I watch a cat movie or clip I end up with an interested party on my shoulder or knee, and even the odd paw on screen! And don't even mention their influence on the keyboards!

Loved this Joan - thank you. The obvious connection between vellum, mice and cats in the scriptorium had never occurred to me either. As Michelle says - writers and the love of a good cat! I never thought beyond writing monks wanting a cat. And, of course, cats do tend to find their way to quiet billets with regular meals and ear scratches.
But reading about all these writers and their cats is making me miss the late Biffo all over again.
I think the cat that pissed in the night must have been shut into the scriptorium, or it would never have done it. Were they shut in overnight to catch the mitching mice? - I suppose they must have been. That monk should have been more careful! Cat acquitted!

What a super post! I do love the pictures too!

Many thanks - and here's to writers' cats, past and present and fondly remembered alike -

I love the paw prints! I haven't had a cat in a long time; my most recent office mate was a dog I loved very much, but who would probably have thought of a mouse as a pal.

Love this! I have no cats nowadays, but I do have a photo of our last cat trying to swat the cursor, when she was a kitten.