A Painting for the Cabinet of Curiosities by Imogen Robertson

I have been broke, very broke or oh-my-god-they-are-coming-for-the-telly broke at various times in my life, and at those moments it’s tempting to look at your past spending and wonder what in hell you were thinking. That thought goes through my mind every time I open my wardrobe door; but no matter what my financial state, the indulgent purchases I have never regretted are my paintings. Some I bought from shows, some from antiques warehouses, and some from the internet. It’s one that came from the latter category I want to talk about today and here it is: 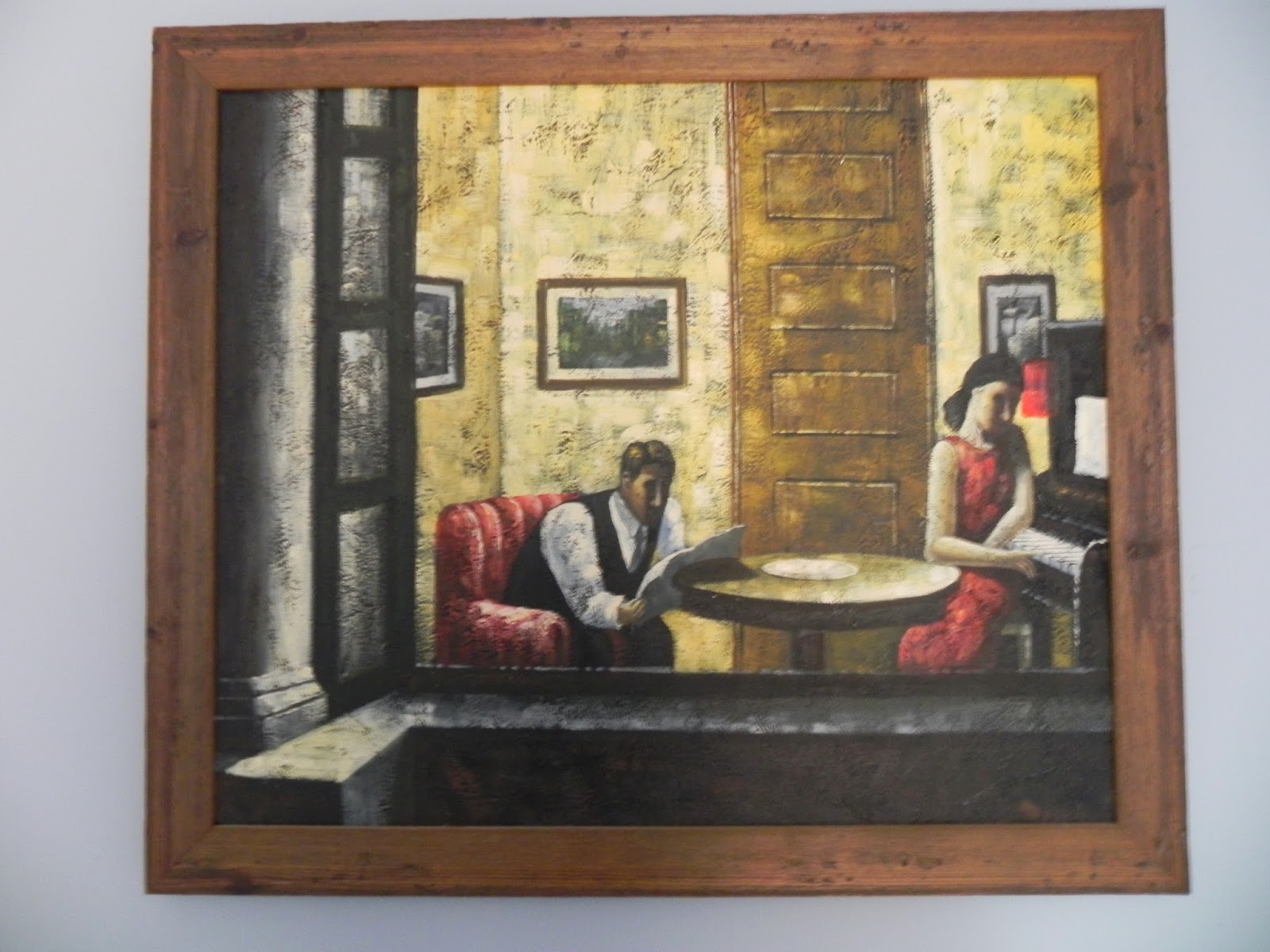 I bought it as an unstretched and unframed canvas on ebay from a man in Glasgow. I think it was some time in 2001. He said he had picked it up at a market and had no idea where it came from. I got it mounted and framed, and hung it on my wall. Now, as you guys are a particularly savvy bunch, you have probably already recognised it as a copy of this painting - Room in New York by Edward Hopper from 1932.

I’m afraid I didn’t realise the connection until 2004 when I went to Hopper’s retrospective at the Tate. As I walked through the galleries, I thought, 'God these remind me of that painting at home'. The original wasn’t on display but I flicked through the Taschen book in the giftshop, and there it was.

I can only assume that my version was painted by an artist who was studying Hopper, and so he copied the picture to understand better the techniques involved. It reminds me of those artists one sees in all the major galleries making copies of the images on display. It makes me think about artists of all sorts learning their craft through exercises in imitation. The characters in Paris Winter spent much of their early years of study copying other artworks, and I know when I read things I love, trying to imitate the cadence of that writing in my own mind is part of my learning process.

But it's not a direct copy. The faces in my version are more stylised, the paint is not applied with Hopper's smoothness - in mine the darkness behind is breaking through. Though the colours are close, they are different - warmer in Hopper's original. My artist has followed those three patches of vivd red, but they have completely changed the colours in the picture hanging on the wall above the man's head.

Why did the artist decide to change that, of all things? I wish I knew who he or she was and could ask. Perhaps they just did the picture for fun, or as a gift for a friend who really liked Hopper. Perhaps the feeling of isolation and voyeurism in the original attracted them, though the style of painting did not. I can’t say. My version has no signature or other identifying mark I can find.

So it remains a curiosity, an item that provokes questions rather than provides answers, so I offer it for inclusion in our online cabinet. If anyone has any further thoughts or insights, I’d be really pleased to hear them.

Theft of Life is out now
Paris Winter is available in paperback
https://twitter.com/RobertsonImogen
Posted by Imogen at 00:30

If Leonardo Da Vinci could copy other artists, so can I.

This painter is obviously skilled enough to have made a more direct copy, but chose not to. Maybe the green painting on the wall is an assertion of individuality within the stricture of copying.

It's a fascinating subject which perhaps only an artist or a student of art can answer. Speaking as a writer, I wonder why we are discouraged from doing something similar which is slammed as plagiarism even when unintentional or even a 'study' in style or technique. Perhaps it has something to do with signatures or price? It's hard to decide. Certainly a topic for discussion.

I love the copy - especially the way the black shows through!

Sally, you make me think. Writing students are encouraged to copy another writer's work, in order to understand the style and rhythm. A direct copy is plagiarism, though, so we can't send that copy out to be published. (Or we'd better not.)

But I'm wondering now if Fanfiction is an outgrowth of this kind of copying. It's certainly becoming popular.

As you say, it isn't a direct copy. I don't think it should be called a copy at all - rather it is 'after' Hopper's painting, implying that it's inspired by it. Glasgow? Probably an early Vettriano!

Thanks for the responses! Yes, I think it shows considerable skill and I wish I could find out why it was created.

It's interesting, isn't it, to try and draw the line between saying it's a 'copy' and saying it's 'after'. Maybe I should say it is a 'version' of the Hopper.

Copying another writer can be a great way to learn. I think as long as the source material is acknowledged, that's fine, - a lot of the time such things are private exercises anyway.

Fanfiction is, I think, a sort of outpouring of affection for certain characters and worlds and certainly popular - PD James is at it after all in Death comes to Pemberley.