When I first saw Lawrence of Arabia, there was one particular scene that caught my attention. Lawrence (aka Peter O’Toole) was making a point about mind over matter. He lit a match, and he held his finger within the flame. He gazed at it, bright blue eyes intent, face unmoving. Then, quietly, he said something to this effect: “It’s not that I don’t feel the pain. It’s that I don’t allow myself to show it.”

This was interesting. It spoke of a man with striking powers of concentration, self-belief and self-discipline – an ascetic. A man following the beat of his own drum, not that of others.

In civilian life Lawrence had been an archaeologist, but in 1915 he was sent to the desert to negotiate with the Arabs as a representative of British Intelligence – of the Great Game, of Empire. But he held on to his own conviction that the Arabs should be allowed to rule themselves, and played an important part after the war, as an adviser to Winston Churchill, in bringing about self-government  in Iraq and Jordan.

I knew little more about him than this. But a few weeks ago, I went to Clouds Hill, his retreat in , and there I learnt a great deal more. 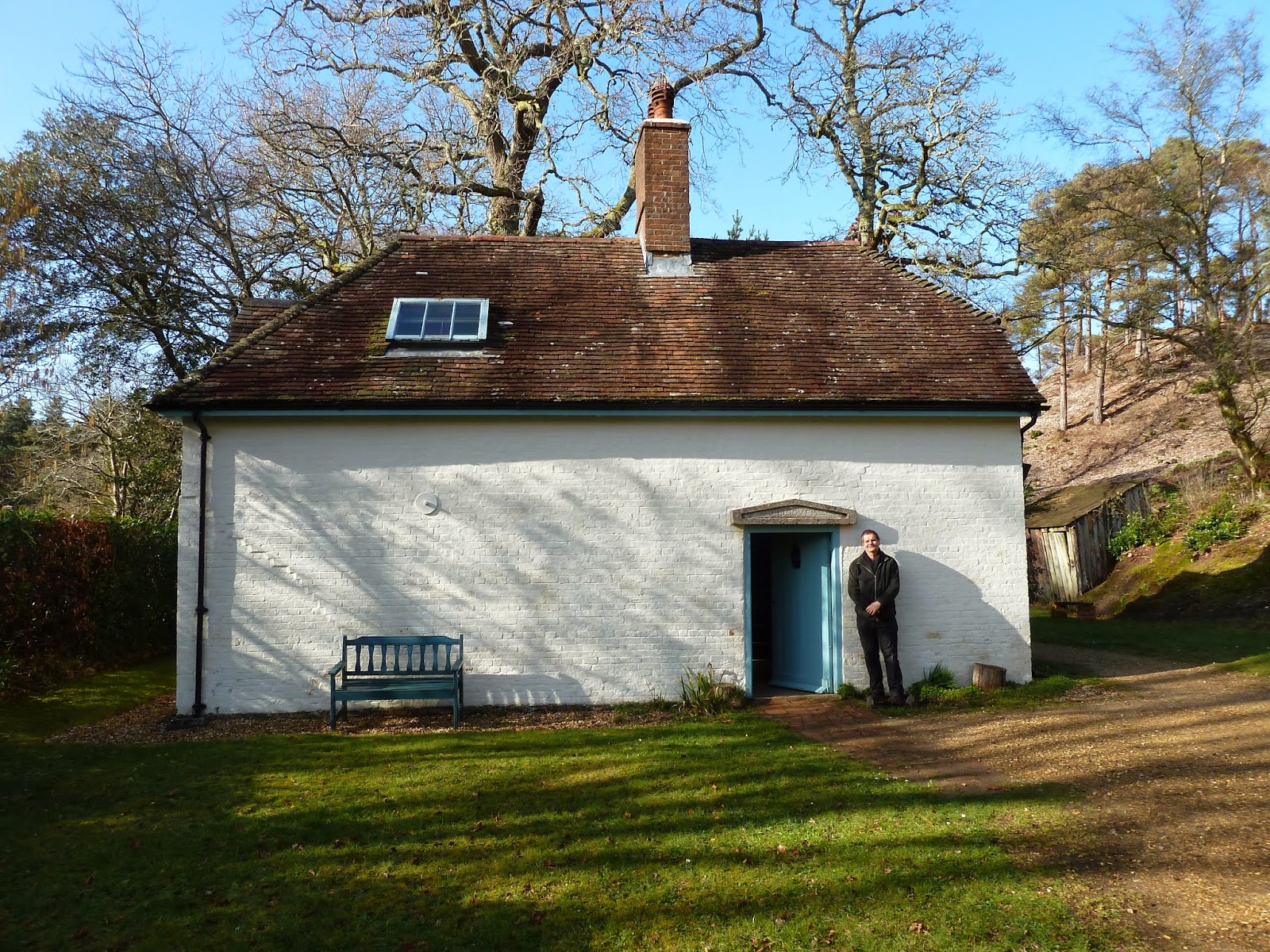 Clouds Hill is a tiny white-washed cottage in a clearing in the woods near Bovington, where there is and was a Tank Corps camp. After his wartime activities, his post-war political campaigning on behalf of the Arabs, and the completion of his book Seven Pillars of Wisdom, was exhausted. He knew that he was dangerously close to the brink. He decided to enlist in the army as an anonymous private, believing – rightly, as it turned out – that the routine of life in the Tank Corps would free his mind to do what he most wanted to do: to write. He rented Clouds Hill, then a semi-derelict labourer’s cottage, a mile away from Bovington Camp.

Built in 1808, the cottage was in desperate need of essential repairs. To fund this work, sold the gold dagger which had been made for him in during the war. He slept and ate at the camp, so he wasn’t bothered about a bedroom or a kitchen, or even at that stage a bathroom. All he wanted was a room where he could write, read and listen to music. (A bit like Emma Hardy, whose rooms in nearby I wrote about last month. I don’t think he would have known Emma, but he did become good friends with Thomas Hardy and his second wife, .)

So he had a large window put in upstairs which would give him enough light to write by. He had very definite ideas about interior design, and was influenced by the ideas of William Morris: there was a certain harking back to mediaeval, monastic simplicity. Objects were designed to fulfil a function, not simply for the sake of their appearance. Clouds Hill had no paint or wallpaper; it was decorated with wooden shelves and panelling and undyed leather hangings. There was no gas or electric light; nothing but candles. Friends – including E M Forster, George Bernard Shaw and his wife, and friends from the ranks - would come and talk, and listen to the music he played on his state-of-the-art phonograph, and be offered tea and tinned snacks. 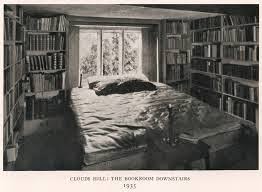 Later, when he started to make good money from his writing, he did more to the cottage – but it never became a conventionally appointed house. He didn’t want a kitchen, but he did get the downstairs damp-proofed and created a room with a large, leather-covered day-bed next to the small window, for reading in the daytime. At night, he used a chair with an integral table and sconces for candlesticks, in which he sat by the fire, surrounded by his collection of hundreds of books, many of them given to him by their writers. He also contrived a system for bringing and heating water to the bathroom he put in also on the ground floor – ‘Give me the luxuries,’ he declared, ‘and I will do without the essentials.’ (Such as an indoor toilet!) He also bought new varieties of rhododendron to plant on the wooded slopes around the cottage, and built a thatched cottage for his beloved Brough motor cycle.

Sadly, he met his death on the Brough. In 1935 he was all set to retire from the army and live full-time at Clouds Hill; but riding back from the camp one day he had to swerve to avoid two boys on bicycles, and he came off. He died a few days later, and is buried in the churchyard at nearby Moreton. (The church there has the most beautiful engraved windows, created by Laurence Whistler – not to be missed.)

A quiet but insightful guide told us more about ’s background. There was scandal around the circumstances of his birth: his parents were not married. His father, a wealthy landowner from , had abandoned his first wife and family and come to live in with the woman he loved, Sarah Junner, who had been his daughters’ governess. They had five sons. They moved several times, trying to avoid the scandal which would arise from the discovery of their irregular status, finally ending up in , where gained First Class Honours in Modern History. Then, turning to Ancient History, he spent several years in in , digging with Leonard Woolley, before being posted to in 1915. 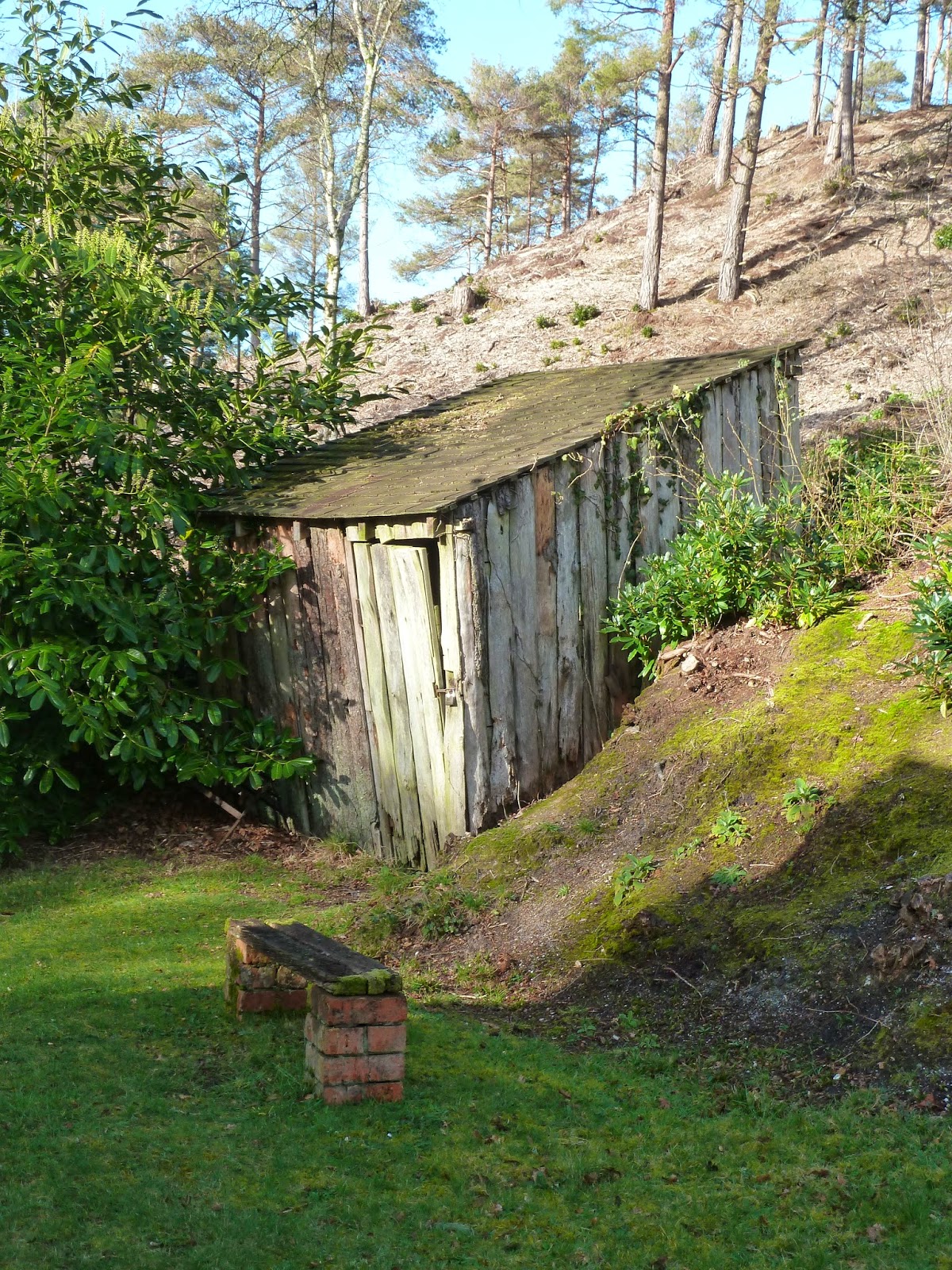 Two of his brothers were killed in the war, his father died just afterwards in the flu epidemic, and then his mother and another brother went to as missionaries. So, the guide pointed out, when was going through his difficult years in the twenties, he was alone except for one remaining brother. With no family, no roots to return to, Clouds Hill became his shelter and his home.

It’s a green, peaceful, quiet place: a place, as Yeats puts it, ‘where peace comes dropping slow.’ A world away from the desert and the fates of nations, and an insight into a remarkable and unusual man.

You have really made me want to visit Clouds Hill, Sue. I have visited several of his haunts in Syria. Baron Hotel in Aleppo where, or so it was claimed, Lawrence stayed in room 202 and left without settling his bill! We could really do with another figure with his vision and understanding of Arab problems in politics today.
There is some talk that his fatal fall from the Brough might not have been an accident...

Yes - I haven't looked into that, but I do feel a bit puzzled as to how the two boys on bicycles could have been involved if it was set up. But I did read somewhere that the intelligence services swooped on the cottage after his death and went through everything. More ferreting to be done! Do go to Clouds Hill - it has a very special atmosphere.

This certainly inspires me to want to visit the place, Sue. I have always loved the name "Clouds Hill".

It's so interesting that he kept Clouds Hill rather primitive, except for the phonograph! It must have been a wonderful retreat for both rest and creative work.

Yes - I think he had a very clear sense of what mattered to him and what didn't, and the house reflects that.

I really enjoyed reading this, Sue. An interesting and evocative account of Lawrence and his home. It ceratinly made me want to viist Clouds Hill. I hope you'll keep writing these - it's wonderful to have an insight into where as well as when these great writers wrote.

That cottage looks like a writer's dream. I remember the film but not that scene - I always see him standing in a desert dressed in Arab robes, staring out with remarkably blue eyes and insisting upon going alone... can't remember much else!