In the middle of April, I spent five days at Greenway. This is the country home of Agatha Christie, on the banks of the River Dart, just across the water from the pretty village of Dittisham.

Greenway House was built in 1792 but Agatha bought the property in 1938 and spent many holidays here. The house is large and square and stuccoed in cream. It looks over lawns and trees and a magnificent array of magnolias, rhododendrons and camellias. The sun shone for the whole time we were there and the shrubs were at their very best.  Since 2009,  Greenway has been  a National  Trust property and the old servants' quarters have been turned into an apartment that can sleep 10 people. It's comfortable and also old-fashioned....you feel that Agatha herself might easily come walking into the lounge or sit at the dressing table in one of the bedrooms. In the bookshelf in my room, for instance, I found a Gwen Raverat's Period Piece with this dedication: 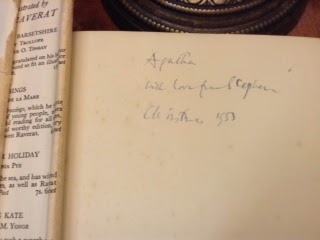 I read and loved Agatha Christie back in the 1950s and early 60s, but now have a personal connection with the Queen of Crime. My daughter, Sophie Hannah, has written a new Hercule Poirot novel and has been obsessed with all things Christie for eighteen months or so. The name of this novel is embargoed till tonight but I will put it up in a comment below this post so if you want to see what it is, come and have a look  tomorrow. 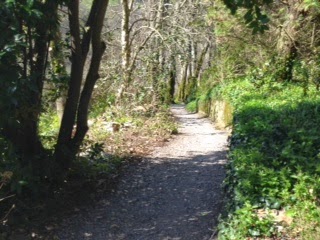 Here is one of the paths leading down to the river. Agatha was very keen on gardening and there are gardening books on many bookshelves. The planting is inspired. Periwinkles, bluebells, tulips, fuchsia and banks and banks of azaleas make a walk around the property a real pleasure. 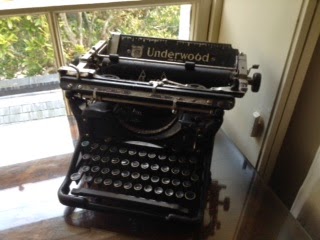 This typewriter was on the windowsill at the end of the passage in the guest apartment. I suppose that means it's not actually the one Agatha wrote on...that would have been moved to the House itself. Still, it's an old machine and it's here so I like to think she must have written at least a letter or two on it. It is, whoever used it, a beautiful object, I think. 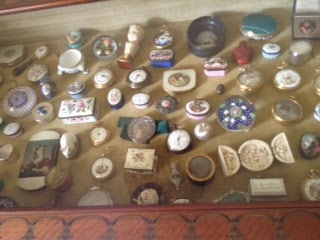 The first thing that strikes you as you walk  around the house is what a collector Agatha was. Here are some snuffboxes, but she also assembled a great deal of  crockery, ornaments, books, pictures, and assorted pieces of archaeological pottery, connected to the work of her husband, Max Mallowan. She used to accompany him to his archaeological sites and work on her books while he was overseeing the digs. 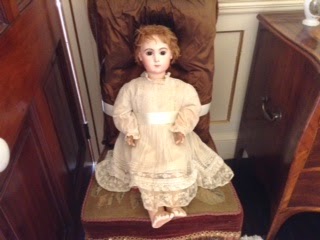 This doll  ( above) has, like a great many dolls, a touch of the sinister about her. Below is the portrait of Agatha when she was four. I love it because the artist has captured exactly a kind of sulky boredom that's not often depicted by artists. 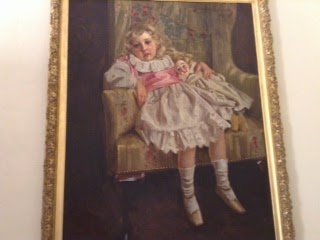 And here is the top of the grand piano, full of family photos. 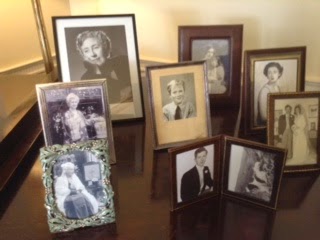 There are several dressers in the house.  On this one,  alongside the crockery, is a skull, which struck me as appropriate. 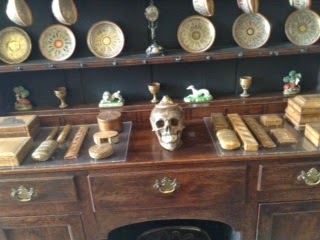 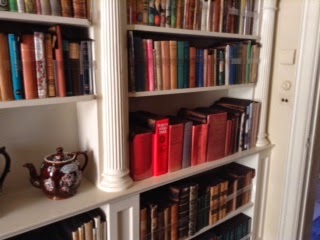 A great many books are displayed both in the house and in the apartment. You can see scrapbooks and letters and on various tables there are envelopes addressed to the author, looking as though they've just been delivered. I wanted to take photos of these but for some reason my camera decided to malfunction just at that moment. 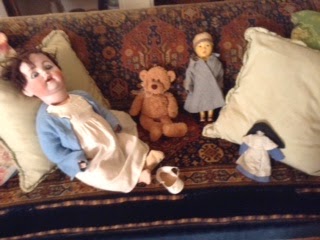 Here are some of the toys arranged on a sofa. I love the mad look on the eyes of the doll on the left. And that teddy has been loved to bits by someone, maybe even Agatha herself. 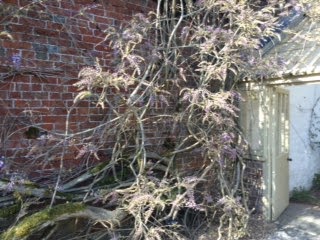 Finally, wisteria, growing beside the greenhouse in the Walled Garden. The greenhouse is full of tropical plants and cacti. There are espaliered trees, and a herb garden with everything in it: sage, marjoram, lemon balm, dill, orange-scented thyme, rosemary, and bay.

Agatha Christie called Greenway "The loveliest place in the world." She had travelled widely but  Greenway's tranquil atmosphere, and the thousand shades of green that she could see from the windows of her house made this place into  the best kind of home.  Her benevolent and inspiring presence is everywhere here.  If you find yourself in the area, it's a wonderful place to visit. I loved my time there.

Thanks, Adele. You've made me both want to go, and reminded me of how much I loathed baby dolls when I was a child: mine were so vapid and needy and monstrously selfish. Brrr!

This is a place I really want to visit, and you've given us a marvellous description of it, Adele! I love Agatha's autobiography - it's an absorbing account, particularly of her childhood. The detail that always sticks in my mind is that she loved cream, and would drink it by the glassful! You can see the older Agatha in the expression of the child in the portrait - it's really good, isn't it?

Wow, lucky you! Actually STAYING there, not just visiting. Is it available for the odd tourist? I don't live in England, but you never know when I might visit again....

Your daughter is very brave to take on this task; it will sell, but people will complain it isn't Agatha... Still, you must be very proud she has been chosen to do it. :-)

It's a fascinating place - but I wondered if it was a missed opportunity. It's great at what it does - but there were aspects of Agatha Christie's life that still make me uncomfortable - why did she fall out with some of her children while others treated her as a saint? She was a complex women - Greenways is lovely, but I wanted to get under her skin a bit more.


This is a truly beautiful post. How could anyone not long to visit this place after reading it? I read all of Agatha's books when I was in my teens and will definitely read Sophie's - I wish her luck with it.

The embargoed title is like a clue in an Agatha Christie story! I alway enjoy visiting the homes of writers and this one is now on my list. Thank you and wish Sophie good luck with the book.

I have always hated dolls and find them all sinister. I love Chrstie's remark about her second husband that it was great being married to an archaeologist because "the older I get, the more interesting he finds me." Greenway sounds wonderful!

Greenway is indeed a lovely place! Wish I'd known you were visiting, Adele - it's only about 5 miles from where I live, so I often cycle out there. The gardens are beautiful at all times of the year, and they sometimes host events such as fairy parties and open-air theatre etc.

If anyone is thinking of visiting, there's a restriction on the number of cars they allow dail, and you have to book a 2-hour slot in the carpark (which is a shame if you want to stay longer). But you can also get there by ferry across the River Dart from Totnes, or take the cool vintage bus from Torbay. Locals get free entry into Greenway (and neighbouring Coleton Fishacre, Kent's Cavern, etc) as members of the Torbay Coast and Countryside Trust, and you can still buy a small house in Torbay for under £150,000...

Jo - I think Agatha only had one child - a daughter, Rosalind, and that they were close.

Thank you so much for your comments! And Katherine, I wish I'd known you were so close! Your information was fascinating. On a touristy note I would heartily recommend a fab seafood restaurant just across the Dart in Dittisham. It's called the Anchorstone and it's wonderful!
Sophie's title will be in the Times tomorrow and I'll put it up here.

Thank you so much for your comments! And Katherine, I wish I'd known you were so close! Your information was fascinating. On a touristy note I would heartily recommend a fab seafood restaurant just across the Dart in Dittisham. It's called the Anchorstone and it's wonderful!
Sophie's title will be in the Times tomorrow and I'll put it up here.

THE MONOGRAM MURDERS is the title of Sophie Hannah's Poirot novel.

Greenway sounds wonderful,full of inspiration. I love collectors. I wasn't a great fan of AC as a person, before reading this, though I enjoyed her books as a girl, but now I think I would have enjoyed her company. Thank you, Adele x