Matthew Lewis and The Monk 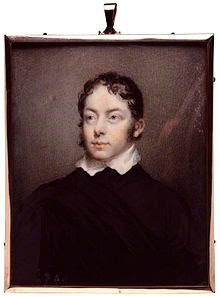 Matthew Lewis is one of the most famous of the original Gothic authors, and to my mind probably the most authentic. Most people, and certainly most students start out with Horace Walpole's risible 1764 publication Castle of Otranto, which if you've never read it, involves an opening chapter in which the 'sickly' and distinctly unpromising darling son of Prince Manfred is buried under an enormous armoured helmet and people rush around crying 'Oh! my Lord! the Prince! the Prince! the helmet! the helmet!' I never really recovered from that to be honest, so perhaps I'm being unfair. But I doubt it. 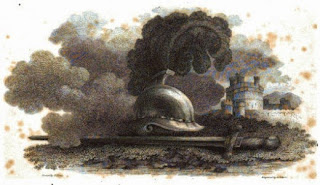 Next on the list is Ann Radcliffe's Mysteries of Udolpho. Udolpho is often cited as 'the archetypal Gothic novel' and features heroine Emily St. Aubert. Emily's a bit of a drip, in true Regency heroine style, but she's actually quite likeable, although victimised by her author. Still, Radcliffe let's her show her true mettle and eventually, she triumphs, takes financial control of her property and is reunited with her somewhat feckless, though charming, true love Valancourt. Udolpho was hugely influential after its 1794 publication, not least I think because Emily is the central character and most other women in Gothic novels are rendered as little more than set dressing. Udolpho also plays a part in Jane Austen's Northanger Abbey, revealing its influence on impressionable readers of Georgian novels. 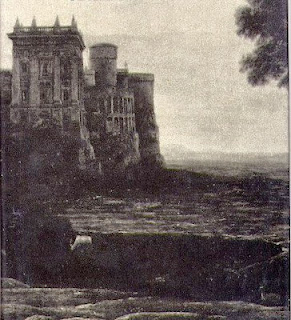 The Monk was published in 1796, after Matthew Lewis had written in ten weeks just before his twentieth birthday. As such, it is a remarkable achievement. It is subtitled A Romance, so I warmed to it before opening the cover, having been warned by my university tutor that it contains all sorts of base transgression. And it really does. Corruption in the church, cross-dressing, homosexual overtones, incest, burning at the stake and eternal damnation are really just the start. It is quite horrifically dark and the mental and physical torture and death of a teenage girl is just one shocking part of it. 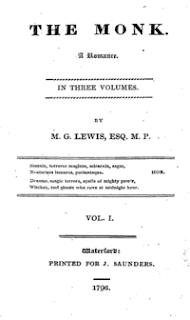 To understand quite how Lewis wrote a work of such genius at such a young age, it's necessary to look at his life. Lots of people divorce writer and writing (or art and artist, but I'm wary of the comparison). For me, Matthew Lewis is hugely interesting because he was wholly English yet his money was made in the West Indies. No so unusual at that time, and the people he hung out with were often far more connected to the Caribbean than he was. He spent a lot of time in Marylebone literary and musical circles where he would have been a mere boy compared to the men and women who had served their time in the West Indies or the London investors who had never, quite, dirtied their hands. Although lots of them did, and revelled in it. 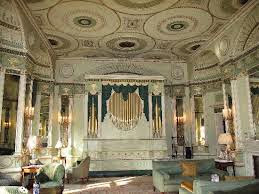 Lewis was also (allegedly, I should add for academic purposes)a homosexual, whose parents had parted in difficult circumstances - his mother having a baby by another man during an estrangement. But Matthew went on to Christ Church, Oxford and then moved in grand circles. Like many who had made their money in the colonies, he was always concerned with being 'friends' with dukes and duchesses. He made a bond with a young boy, William Kelly, whose mother Isabella was a widowed novelist. People often cite this as a case of patronage, but William's particularly wilful abuse of his 'patron's' charity perhaps suggests otherwise.

Following on from the success of The Monk, Lewis's play, Castle Spectre had been a hit in London. Yet real life was getting in the way and Lewis's father died, leaving him in charge of the estate aged 36. The Jamaica plantations had secured his income throughout his career, and launched him into London's social scene, but he was increasingly uncomfortable.

So upon his father's death in 1812, Matthew was heir to a sturdy, if not oligarch-esque fortune. He was no social campaigner, let's not pretend. He was a socialite, probably openly homosexual and a strong player in London's theatrical scene. But he did care, in a way we might now find inappropriate, about the welfare of the people he owned.

The concept of owning people now may be strange and abhorrent but when Lewis inherited his father's estate it was still legal in terms of government, illegal in terms of the judiciary, and ethically abhorrent to many of his contemporaries, yet profitable. Assigning modern morality to history is at best perilous.

Lewis, concerned with his family's estates and taking care of his siblings (and his own fortune), shipped out to Jamaica. The stay on his estates almost made him tear his hair out, and was otherwise eventful, but Matthew came back and spoke to William Wilberforce about 'securing the happiness of his slaves after his death'.

He spent the next eighteen months hanging out in Europe with Shelley and Byron. In terms of the Gothic imagination he'd bested them already (although Byron and Augusta may have given him pause for thought).

But the flame of 'boring' slavery had been lit within him. There's no doubt that Matthew played a part in that strange Byronic storm at Villa Diodati. And what a storm. Manfred, Frankenstein...

Yet that's not Matthew Lewis's story. He made a choice and came back to England, though not for long.

On the 5th of September 1817 he set out to his Jamaica plantations. Jamaica was a horrific colony, with almost unmitigated brutality beyond the basic back-breaking trouble of cutting sugar cane. Lewis set out from Jamaica on Guy Fawkes Night, 1817 (probably not keen on staying too long in a colony with a 30% white settler attrition rate per annum). He died on the ship back to England on the 16 of May 1818. Legend has it they chained down the coffin and yet it slipped those chains and washed up in Jamaica.

Thank you, Lucy. Love the Gothic art. It is interesting to think of the 19th century literature paid in part by slavery. Elizabeth Barrett Browning's family comes to mind ...

I haven't read The Monk, Lucy. In fact, to be honest, I had never heard of it but the story of its author is the stuff of films. Adventures on the High Seas. Fascinating post, thank you, Lucy.

An informative introduction to influences on The Monk, so thank you.

I want to say a word in defence of Castle of Otranto. To be fair, I never studied it at uni so I came to it fresh. I think it's hilarious! Gigantic helmets with plumes that waggle menacingly, statues that have nosebleeds, fainting ladies, handsome youths (Theodore!), mysterious heirs and a cracktastic plot? Sounds fabulous to me. Interestingly, the Anatomy of Melancholy mentions nosebleeds being a sign of bad-luck, so presumably statues with nosebleeds are even more so...
Have you ever read John Moore's 1789 novel, Zelucco? It's about a cruel Italian nobleman, slavery and improbable marriages. I haven't read it, but it's been on my radar for a while and it would be interesting to have an informed opinion on it.

From my research it was Mathew Lewis "the Monk" who influence Shelley who wrote Frankenstein.