The Keeper of the Locks by Clare Mulley


I love my family. Last year, for my birthday, among other things my mum gave me a well-wrapped cigar box celebrating the Brussels Grand Prix of 1910. It made a light parcel and did not rattle when I shook it, but inside was something rather wonderful. 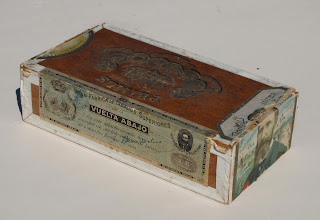 First was a card that said ‘Mary Smith, nee McCombie, 1895-1984’. I was slightly nervous that I might be facing my grandmother’s ashes but instead, below the card, were two chestnut-coloured ponytails, each tied with string. As a schoolgirl, Mary had worn her hair in plaits. In 1911 when she went out to work, aged 16, she had bunched her plaits at the neck, or curved them round her head. But by the 1920s she had a fashionable flapper’s bob and she kept her hair short for the rest of her life. So at some point she must have decided that her long hair was too much trouble and rather regretfully cut it off, or perhaps it was with a sense of liberation that she had her hair chopped, shocking her rather staid aunts as she marked her transition to adulthood and independence.


I have noticed that when a lock of hair is treasured in a film it is usually lush and shiny, and does not look very real somehow. Not so these girlish bunches, which have split ends and several knots, very like my daughters’ hair which I brush and plait most mornings before school. But her long hair must have held great value to Mary for her to have hung on to it all her long life, and clearly the keepsake resonated with my mother too, who could not bear to part with her mother’s treasured bunches either.


With nearly 100 years in a box, the hair has now taken on even greater significance. My own daughters squealed rather delightedly at this family relic from a woman, a great grandmother, who they had never known. But my husband was rather less convinced. ‘Thank goodness it is not a finger’, he said, ‘or even a set of teeth. Perhaps, if it must be kept,’ he added, ‘it could be put to good use, in the mix for some renovating plaster for our walls, or the stuffing for the piano-stool’. My family, he seemed to be suggesting, might be quite capable of keeping anything, and in this he is probably right. Now, however, this box is not just full of hair, it is full of historic-hair, family hair that has been loved and valued by two generations already. Its significance is in its preservation as much as in its DNA. So now I am the keeper-of-the-locks, which sit in their box on the shelf with my prettier old books, some of which themselves were given as school prizes to various great uncles and aunties.


This year my mum, who has clearly if unofficially given me the job of family historian, wrapped me up another of Mary’s treasures; a medal engraved on the back to ‘M McCombie, 2nd Place, Open Competition Girl Clerks, April 1912’. My granny had come second in the country for her civil service entry exams that year, or at least of those girls taking the exams at the ‘Civil Service and Commercial College’ at 1, 2 & 3 Chancery Lane. 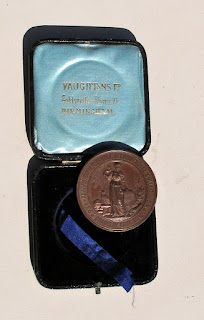 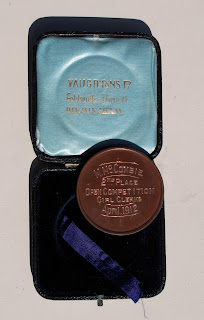 Mary’s medal, front and back.

A medal seems a much more reasonable thing to keep than some old, slightly tangled hair. Medals are earned rather than grown after all, and they were not once actually part of a human being. But perhaps clever Mary had just as much pride in their hair as her exam results. And, I have realized, it is only the two things together, the hair and the medal, that start to hint at the whole woman behind them, Mary Smith nee McCombie, a smart woman who made her own way in the world, but who also rather romantically refused to ever throw out the long hair of her childhood. Perhaps that is a combination that has a certain power of its own, something to emulate, as well as something to preserve. 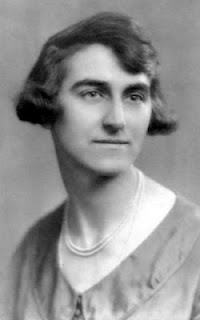 Mary later in life, with her hair still bobbed.

I love this piece. It reminded me that I too found someone's braid of hair among a set of family photos. The trouble is I've no idea who's it belongs to. I wonder if they thought one day they might want to make it into a hair-piece, or if it is to do of the old belief that body parts should be buried with you otherwise you'd spend the day of judgement searching for them, or to ensure that hair didn't fall into the hands of those who might wish you harm. Maybe it was just a sentimental keepsake of their youth. Rather wonderful though that you do know who this belongs to.

How lovely she was! Funnily enough, I recently discovered a lock of hair - but it was my own. I had long, curly golden hair till I was five (it's been downhill ever since), and then my mother got sick of all the screaming on hair-washing day, so she had it cut off. I remember the lock being kept in a glass jar in a cupboard. I found it in a paper bag at the back of a drawer. What is surprising to me is that the colour isn't faded at all; it's still bright. I'm glad to be reunited with it!

Thank you for your lovely comments. I once came across a curl of baby hair lovingly snipped from the head of Eglantyne Jebb, the founder of Save the Children, and subject of my first biography. It was bright auburn - wonderful to see, since the only photos we have are black and white, but I knew her pre-Rapphaelite beauty was often commented on. There is something lovely in the fact that it is still carefully kept by her great great nephew too.

Last year, for my birthday, among other things my mum gave me a well-wrapped cigar box celebrating the Brussels Grand Prix of 1910. It made a light parcel and did not rattle when I shook it, but inside was something rather wonderful. flat rate locksmith

Last year, for my birthday, among other things my mum gave me a well-wrapped cigar box celebrating the Brussels Grand Prix of 1910. It made a light parcel and did not rattle when I shook it, but inside was something rather wonderful. flat rate locksmith