The Naval Braid, by Louisa Young

Our grandfather Bill lost an arm at Zeebrugge in 1918. He was a second lieutenant on guns during the attack on the Mole, where HMS Vindictive was held in place against the quay by the Daffodil and the Iris (!) bombarding and distracting the considerable German defences long enough for three hulks full of concrete to be sunk in the Zeebrugge Canal to prevent German submarines coming out and harrying shipping in the English Channel. This was an extremely dangerous and controversial excursion: unmarried men were chosen.

Leading a landing party against the German gun placements was our other grandfather, Bryan Adams. Small world. Bryan it was who ordered Bill below when he was wounded; Bill confessed that he responded with shocking language. They didn't meet again till thirty years later, when their offspring introduced them.

Here is Bill as a young man: 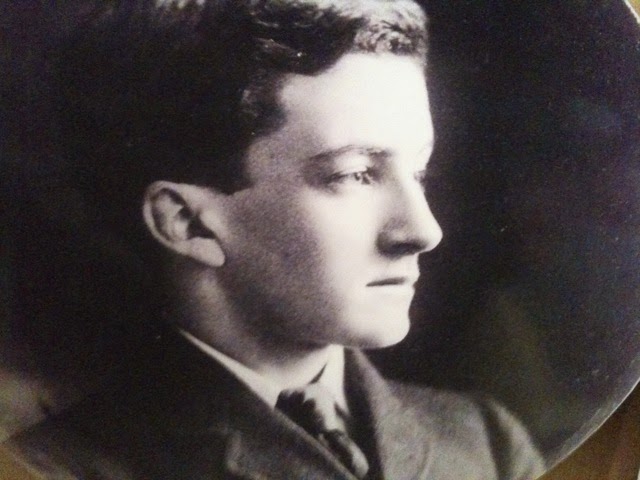 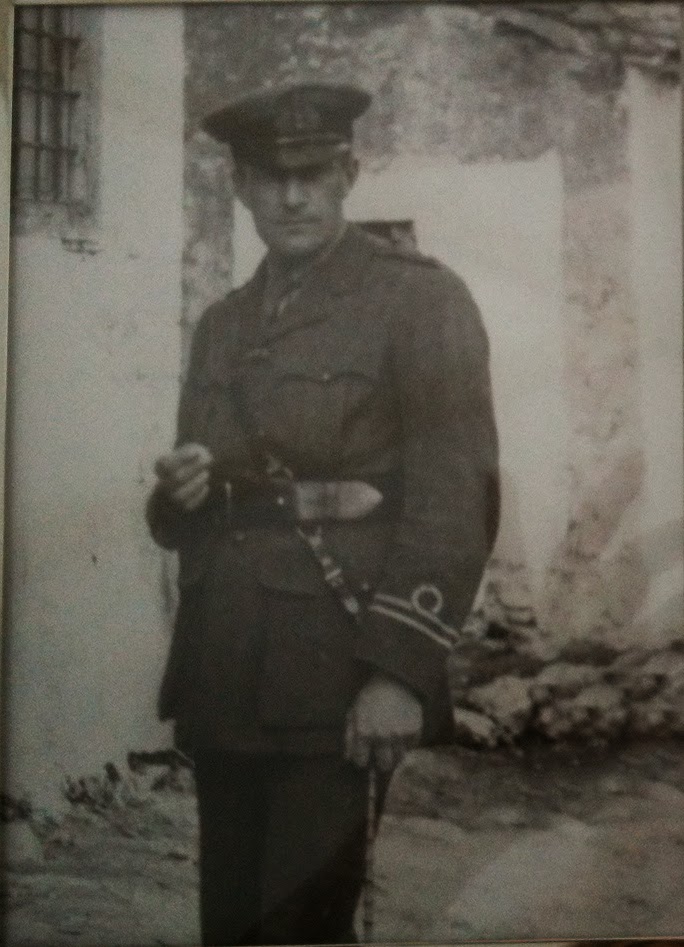 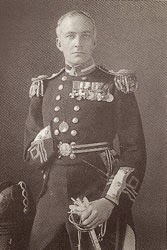 And here he is in his pomp, one-armed: 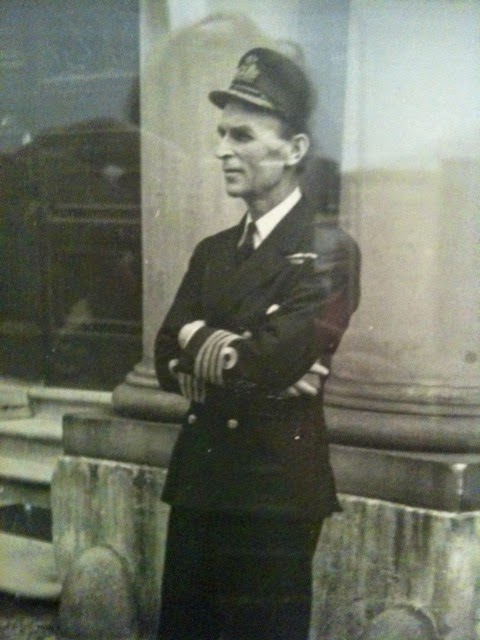 And here is Bryan, many years later.

An Australian historian and scholar named Geoff Burrows is very interested in Bill's life. (I won't go into it in detail here, but it was an unusual mix of poetry, politics, finance, journalism, war heroism and literature: he married Captain Scott of the Antarctic's widow, introduced arts pages to the Financial Times, was close friends with GM Trevelyan and EM Forster, was a cabinet minister in the 1930s and once proposed to Virginia Woolf in a punt. I should say Bill is not his real name. He was Sir Edward Hilton Young; 'Bill' was given to him by his about-to-be-stepson Peter Scott, who didn't know what to call him so was invited to come up with his own name.)

One day earlier this year a friend of Geoff's, Mick Forsyth, also Australian, sent Geoff a link to an episode of the Antiques Roadshow, saying he thought he might be interested. Geoff was interested, and sent the link on to us. It was a World War One Special, and on it a beautiful old white-haired lady showed a photograph of her father, Able Seaman John Joseph Crowley, known as Jack, whose family had come over from Cork during the famine, and who served on board HMS Vindictive at Zeebrugge. Here he is: 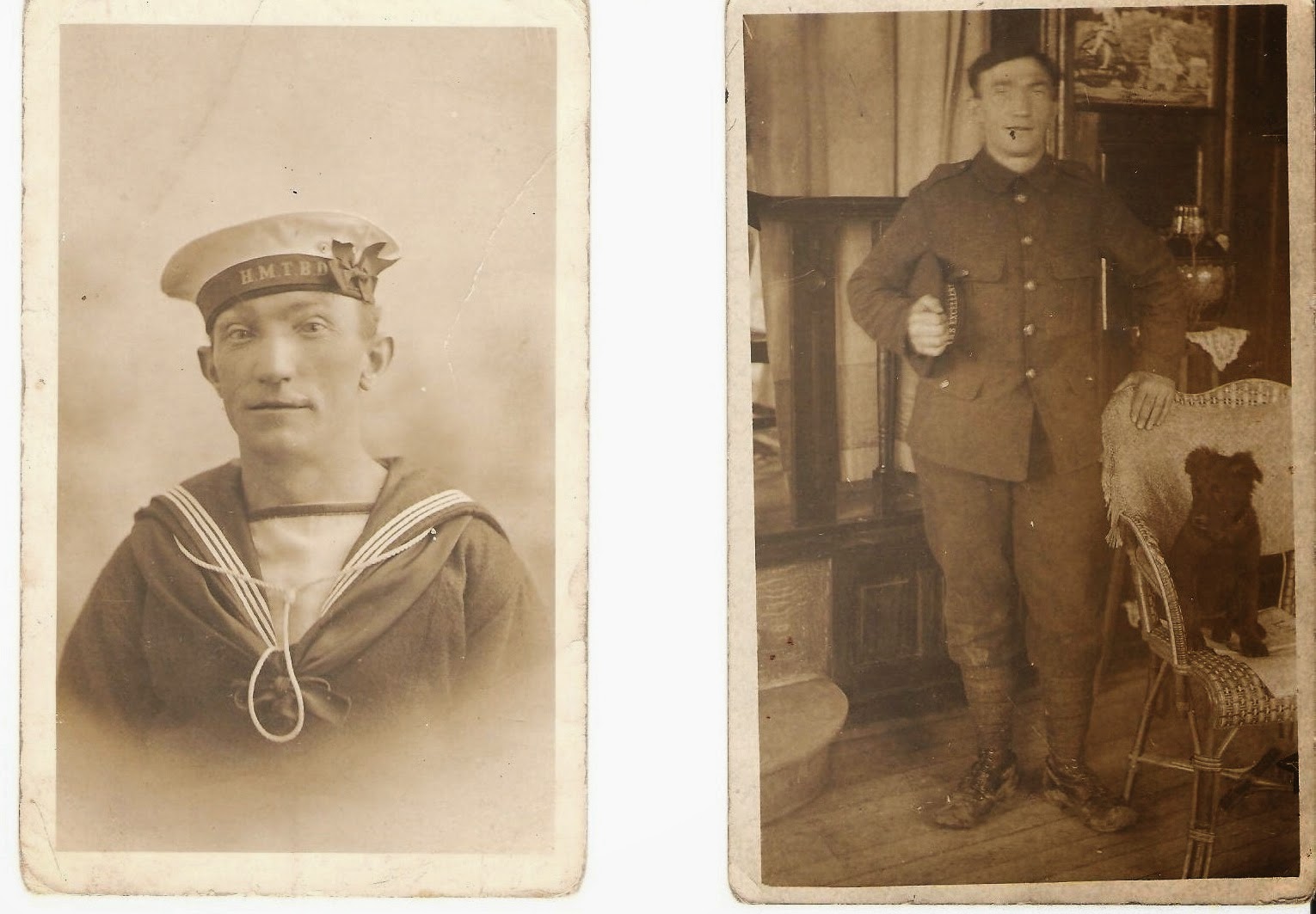 and here is his naval record: twenty years at sea. 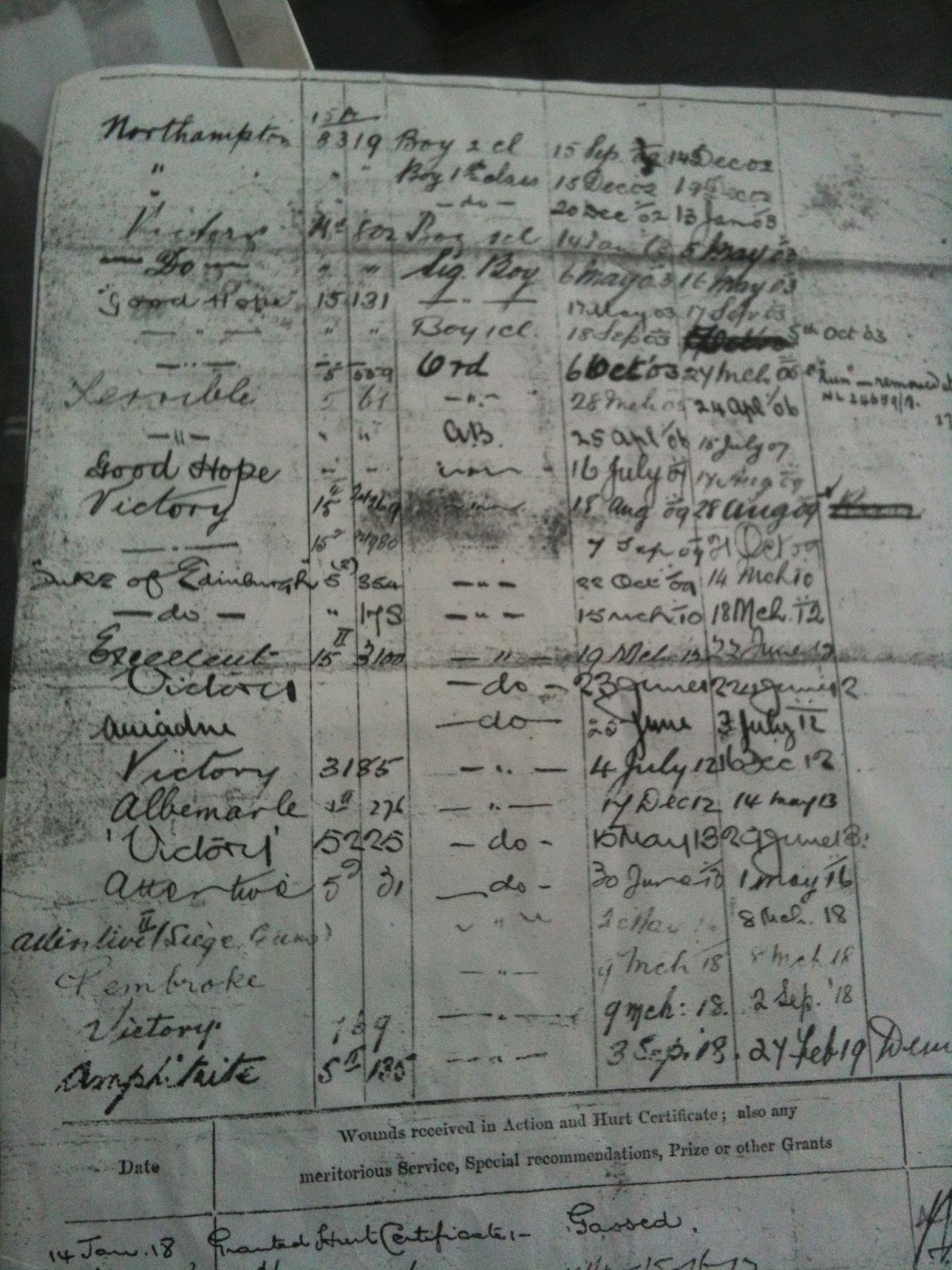 Alongside the photographs she showed two strips of worn and faded naval gold braid. Her father, she said, had helped a junior officer whose arm had been badly wounded. His sleeve had to be cut away for the wound to be attended to; Jack Crowley was holding it, and said 'What should I do with it?' The medic said, keep it, as a souvenir.

Jack didn't keep the sleeve, which would have been bloodstained and shredded, but he unpicked the braid and kept it, and his wife and his daughter kept it, and unless there was another second-lieutenant in guns on the Vindictive that night in November 1918 who lost his right arm, then that was our grandfather's braid, there on the TV, spotted by a man in Australia.

So we all shivered.

Our sister emailed the show; contact was made. Oh yes, said Phyllis Ballard, it was Hilton Young. She sent me this:

'My Father, John Joseph Crowley
He was born in 1885, in Bath, Somerset. The family had come over from Cork, Ireland, during the Famine. At the age of 17, he joined the Royal Navy in 1902. he went in as a Boy, 2nd Class, and by 1914 he was Able Seaman. He was known to friends and family as Jack.
He worked on the Railway, and arrived in the Swansea Valley, in the 1920`s after the war.He met and married my Mother, Gladys, in 1927. I was born in 1929, and my brother in 1932. His health was very poor due to being gassed whilst serving with the Naval Guns in Belgium. He died in 1939 of a lung condition.
It was after his death that we found out about the incident in Zeebrugge, though he had mentioned briefly, and had referred to the officer being Hilton Young.
The British Legion gave us more detail about the incident. My mother always used to say that Jack had saved someone's life .
I found his naval records in the archives and it appears he served on several different ships. He visited South America, South Africa and even China.
I found the braid amongst my mother`s possessions after she died in 1979, and remembered the story.
In recent years, I've done a lot of research into my family history, and into naval records. I am so pleased the story has reached a conclusion, and I would like to return the braid to you. Perhaps we can make some arrangements to get it to you safely.'

We made arrangements. On my way back from the Hay Festival this weekend, where I had been talking about my World War One novel The Heroes' Welcome  - which deals specifically with coming back from war, with wounds and recovery - I stopped in at Cardiff to meet Phyll and Elaine.

Here we are, with our ancestors. 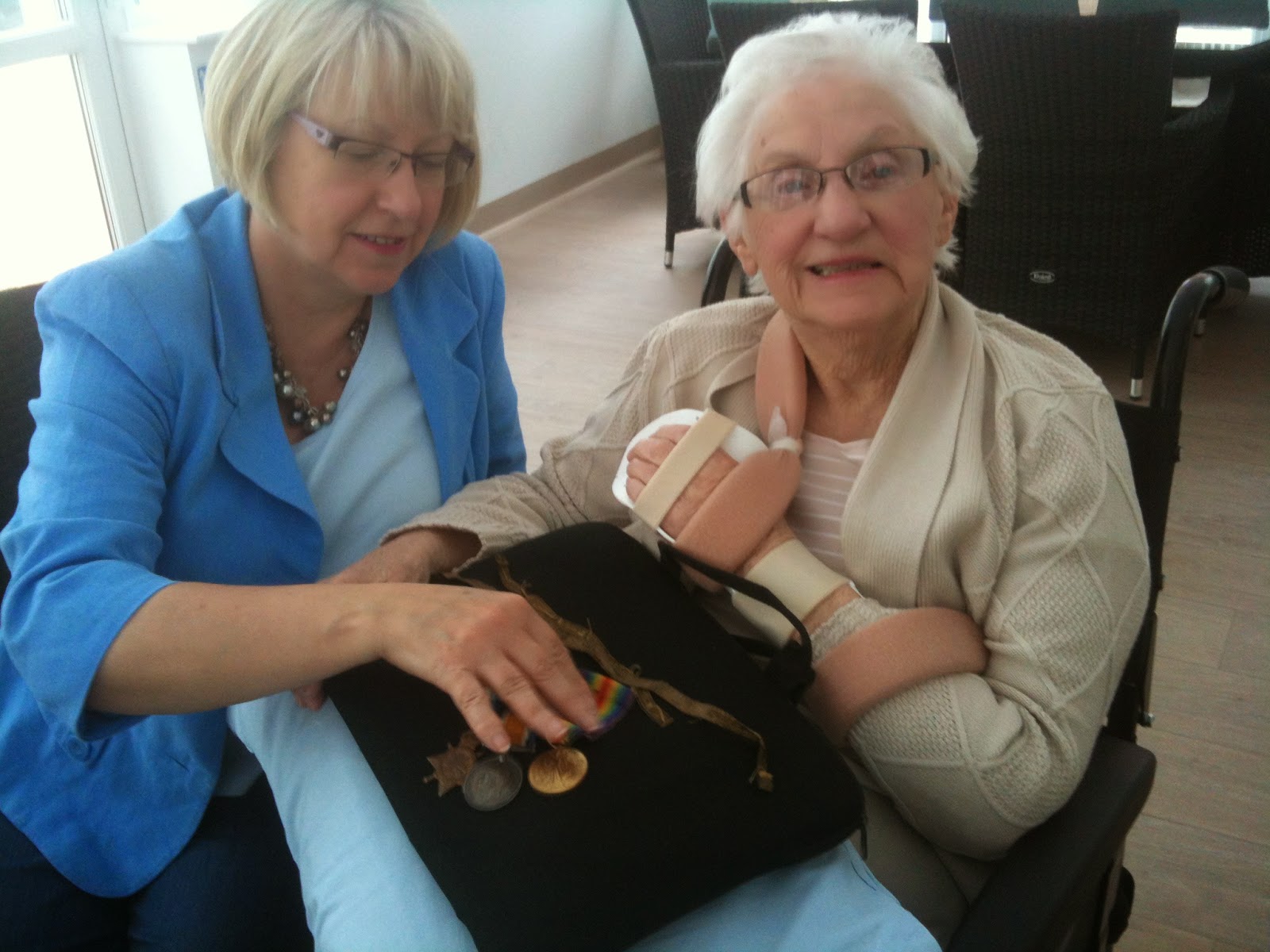 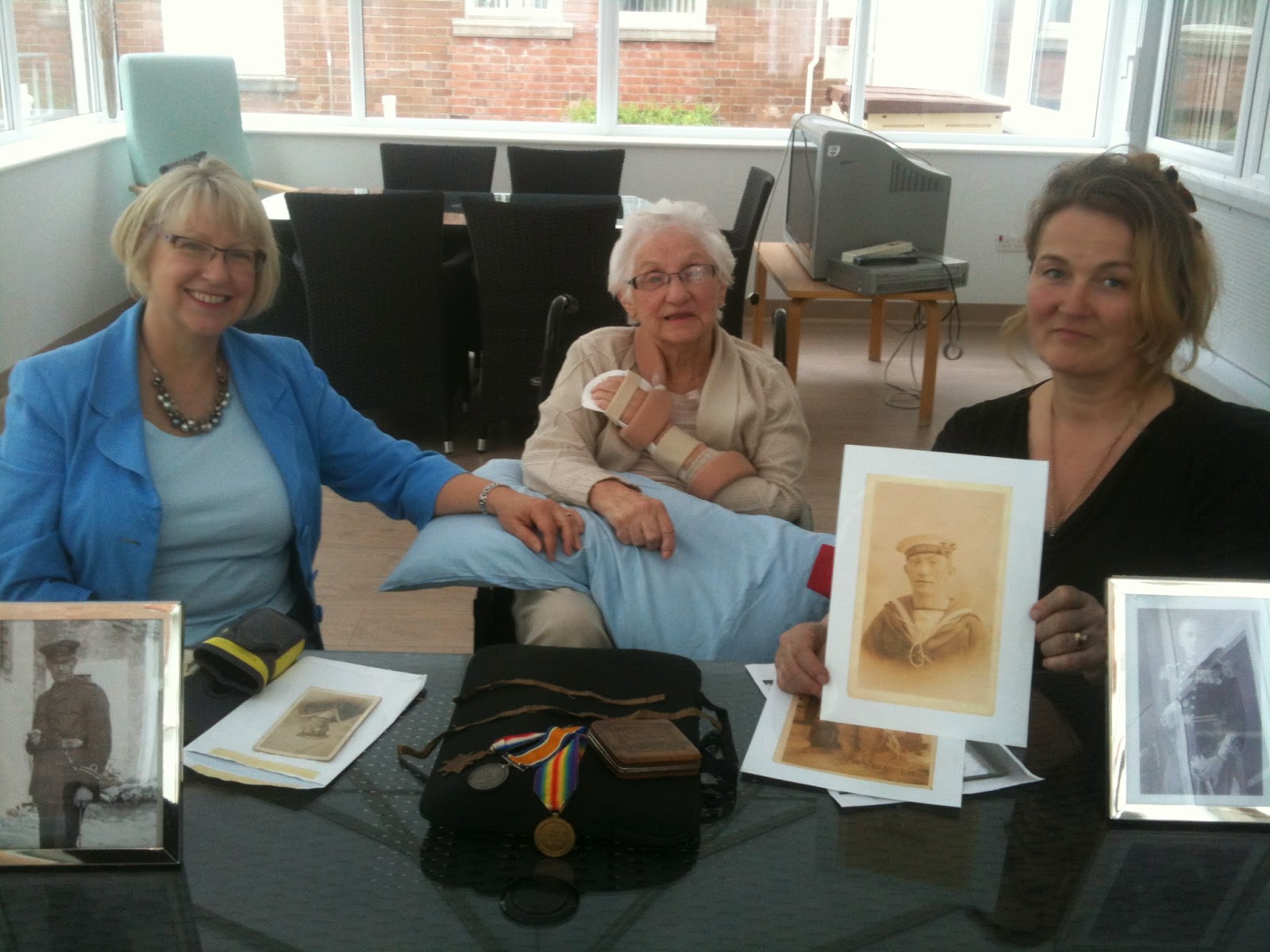 Bill, Elaine, Phyll, Jack and me. The medals are Jack's, behind them is the braid.

Phyll conducted a small ceremony, in which the braid was formally given from grand-daughter to grand-daughter. We took photos, and I made a sound recording of it on my phone for my mother, who is 91. I would be lying if I said there were no tears, or that some of them weren't mine. No-one is alive now to give a detailed account of exactly what happened amidst the guns and noise and terror and courage of that night, but that sailor with his lovely Buster Keaton face, father and grandfather to these lovely women with their faces so like his, helped our grandfather when he needed it. So we were all happy.

And here is the braid. Ninety five years later. I've brought it home, and I'm taking it round to my mum. Thank you, Phyll and Elaine. Thank you, Jack Crowley. 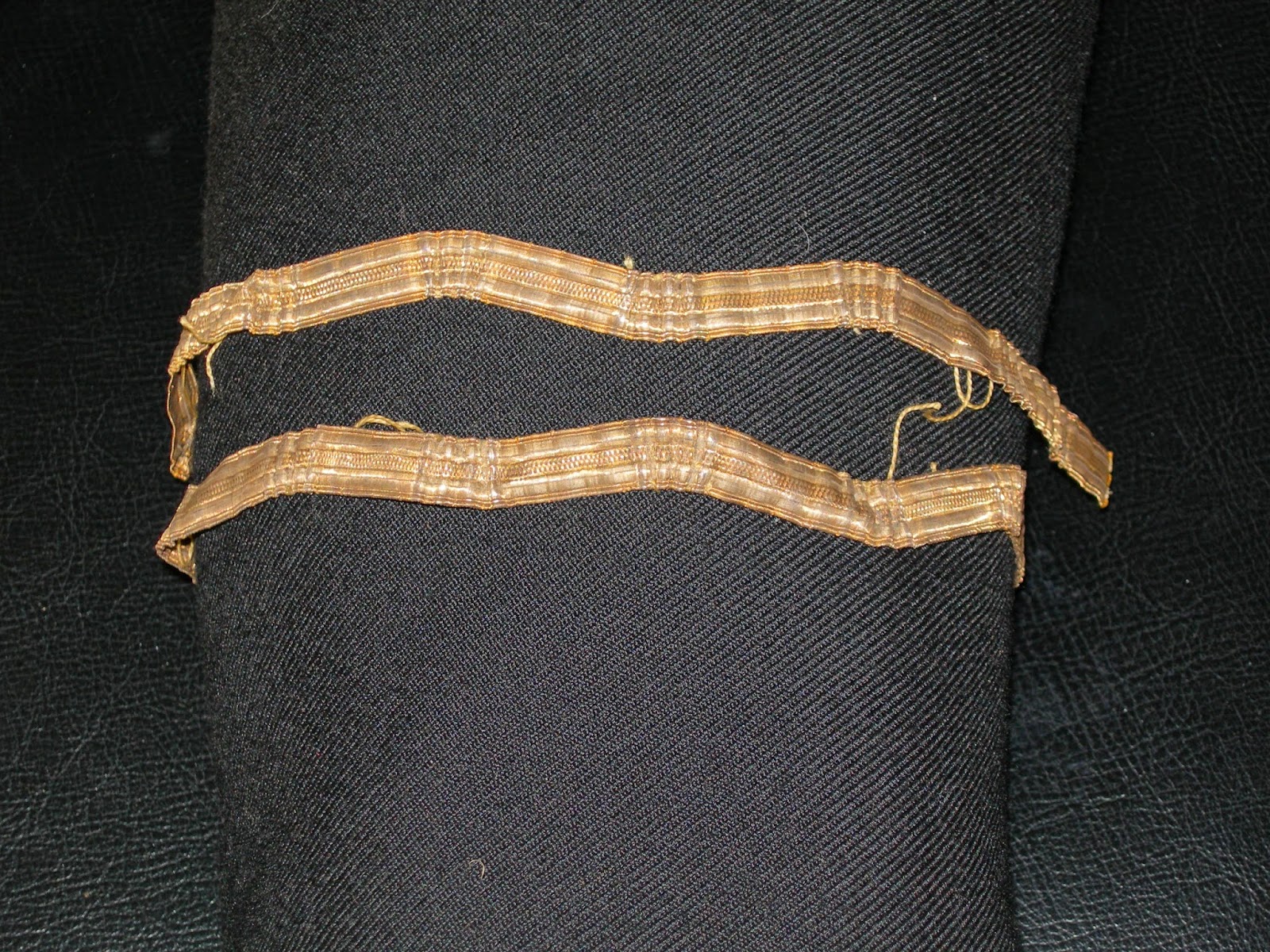 What an uplifting conclusion to the story of the braid.

A wonderful story, Louisa - incredibly moving. Thank you for sharing it.

I am sitting in a cafe in Panama blinded by tears too - a beautifully told story.

What a marvellous, amazing story!