In the 19th and the early part of the 20th centuries lynching was a not uncommon occurrence in the Southern States of America. Of course lynching is not unique to this part of the world. In every country at one time or another the powerful have extracted summary punishments on the less powerful with or without reason.
But in the Southern states, right up until the civil right movement, lynchings were public spectacles, crowds would gather, postcards were produced as souvenirs, members of the crowd might point out to interested relatives exactly where they stood in relation to the victim. Or as in the picture below, from a 1930s lynching, smile for the camera. By the way, the girls are holding shreds of murdered men's clothes (two were hung in this case) which were highly prized souvenirs.

Sometimes we forget that there were people fighting against this kind of horror long before even Billie Holliday sang a note. And thanks to artist Kate Beaton (she draws the marvellous Hark! A Vagrant strips)  I learnt about Ida B. Wells, a writer, educator, mother, feminist, and activist who fought against lynch law and for equality her entire life. 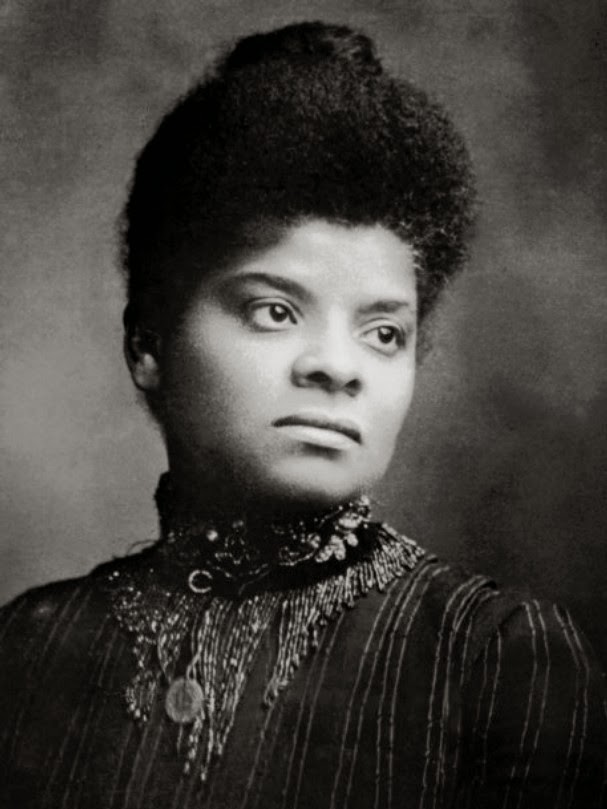 Ida B Wells was a firebrand and a blazing star who deserves recognition here, as well as in the USA. She was born in 1862, a slave, just months before the emancipation act in 1863. Her parents believed in education and she was sent to college, leaving only when her parents and baby brother died in order that she could work as a teacher and support her remaining siblings. She later attended evening classes at Fisk University and was the first black woman to write for a white newspaper. She toured the world speaking out against the horrors of lynching after her co workers in a community store she set up were lynched. (The stores' white owned competitor was not happy).

Not only that she refused to give up her seat in a railway carriage and protested in 1893 against the exclusion of blacks from the Chicago World Exposition.

And that's not all - she was one of the first women in public life to actively keep her own name and not take her husbands' after marriage. She had four children, wrote a heap of books and set up the National Association of Colored Women, which became part of the NAACP.

Her later life was concerned mostly with education and writing and she died, aged 68 in 1931, as many of us might want to in mid sentence, writing a book.

And there's a rather wonderful biography by Mia Bay : To Tell the Truth Freely
http://us.macmillan.com/totellthetruthfreely/MiaBay

And because there is never enough Kate Beaton ever there's a link to a series of comic strips about Ida B Wells  below.
http://www.harkavagrant.com/index.php?id=356

Catherine, Nina Simone singing Strange Fruit always sends shivers down my spine. I even heard her sing it live, unaccompanied. She was mesmeric and her deep passion for the subject was very evident. I knew the background to the song but certainly not all that is in this marvellous post. Thank you.

Thanks fr this post! I had never heard of this lady, nw I have. Ugh, that photo! That is utterly horrible. Wonder where it coes from? A newspaper? Someone's photo album?

Thank you. This is wonderful. And Ida Wells is awesome and humbling.

The book the photo was taken from is very harrowing, called Without Sanctuary it is very grim. I didn't use the whole picture because it is too upsetting