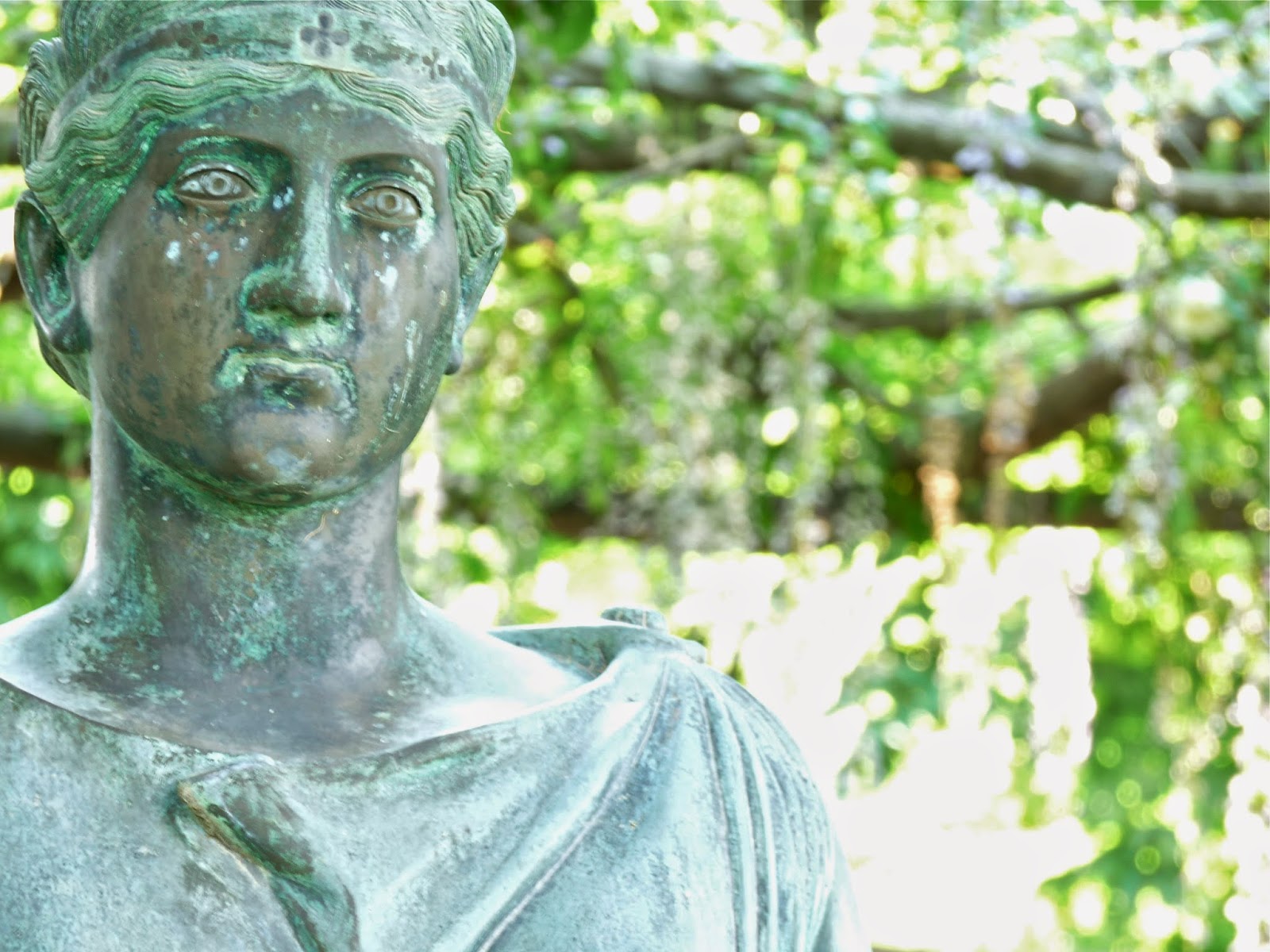 There’s a small corner of the Western Cape that could pass for being part of the Mediterranean. I grew up here with the sweet smell of figs and sticky pine-nut sap on my hands. Two huge old stone pines stood at the bottom of my road and as a child I painstakingly spent hours chopping the hard kernels against stones to get at tiny morsels of sweet nut. I grew up with the scent of hot sun on tomatoes, on the leaves of rose geraniums and on clipped cypresses, with oleanders whose flowers seemed deadlier by moonlight and long ropes of wisteria and grape vines dripping from pergolas.

It could have been the Mediterranean … but it wasn’t. Then when I was fifteen I read a book that transported me to the real Mediterranean where lemons and olive trees grew along terraces and houses were surrounded not just by stone pines but by towering, almost black cypresses and ancient amphora. 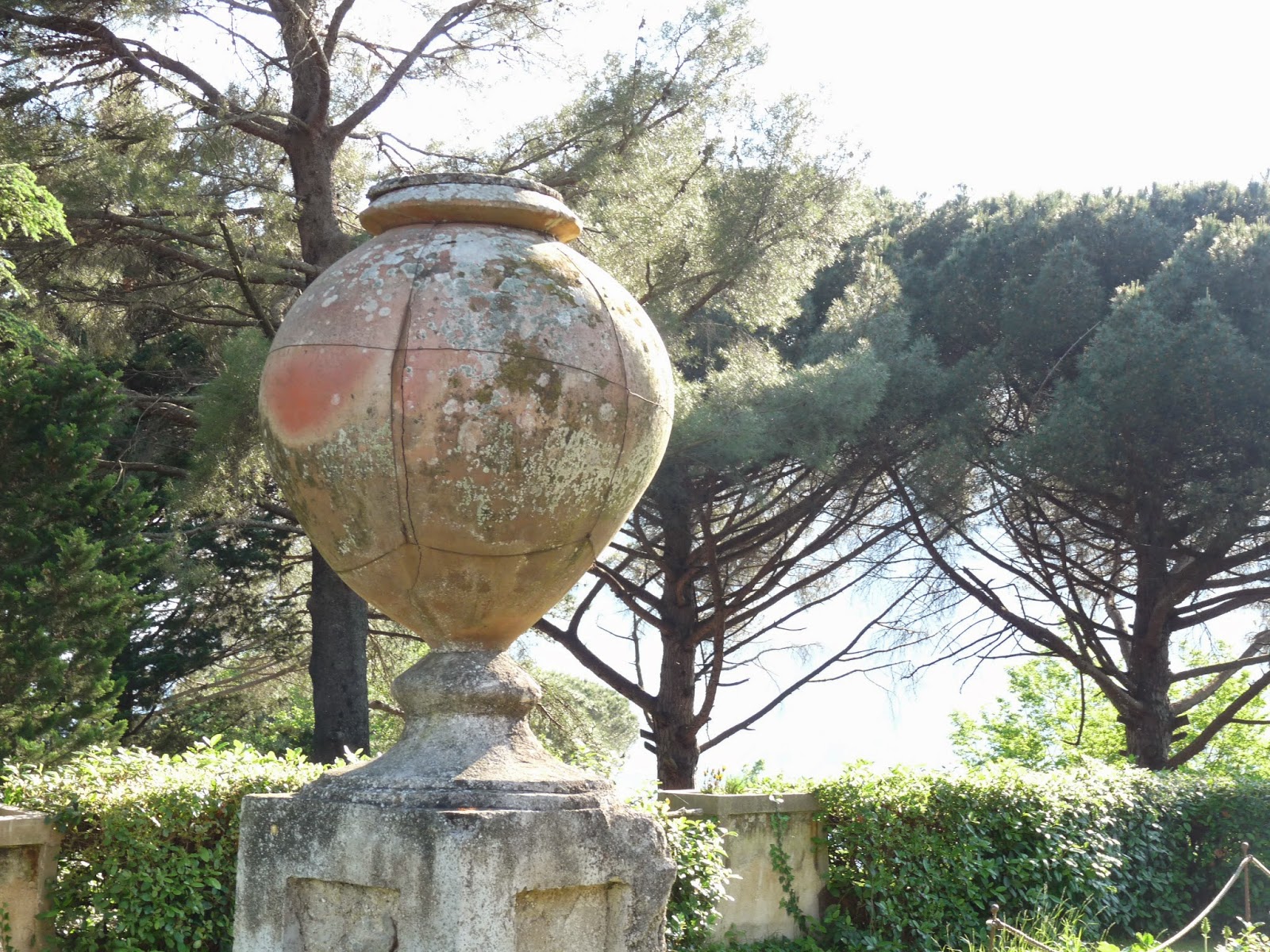 The book was The Story of San Michele and even the Swedish author’s name, Axel Munthe, was enough to transport me into a reverie of sunlight on lemon terraces, where a peasant girl just my age called Gioia, with lips as red as her coral necklace, was kissed by the eighteen year old Munthe, as she showed him up the mountain to the village piazza of Capri. But she refused to climb further and left him outside the church of St Stefano.

Munthe goes on: ‘I sprang up the Phoenician steps to Anacapri. Half-way up I overtook an old woman with a huge basket full of oranges on her head. She put down her basket and handed me an orange.

Just over our heads, riveted to the steep rock like an eagle's nest, stood a little ruined chapel. Its vaulted roof had fallen in, but huge blocks of masonry shaped into an unknown pattern of symmetrical network, still supported its crumbling walls.
"What is the name of the little chapel?" I asked.

" San Michele."
In the vineyard below the chapel an old man was digging furrows in the soil for new vines. The vineyard was his and so was the little house close by. He had built it mostly with stones and bricks of the Roba di Timberio that was strewn all over the garden.

How much of the book is dream and how much truth, is hard to say. When he meets a polar bear at the Jardin des Plantes in Paris while studying to be a doctor, Munthe recalls:
‘Of course we spoke in Swedish, with a sort of Polar accent I picked up from him. I am sure he understood every word I said when I told him, in a low monotonous voice how sorry I was for him and that when I was a boy I had seen two of his kinsmen swimming close to our boat amongst floating ice blocks in the land of our birth.’

As a girl of fifteen I take bits and pieces of the book on board. It jumps about as if the author can never be still. An Italian dictionary might have helped but I have a smattering of Latin that gets me through. I fathom that cacciacavallo means ‘cheese on horseback’ but what exactly is ‘cheese on horseback’? And did Munthe truly see a sphinx in his dream?

‘And here where we stand with this beautiful island rising like a sphinx out of the sea below our feet, here I want a granite sphinx from the land of the Pharaohs. But where shall I find the sphinx?’ 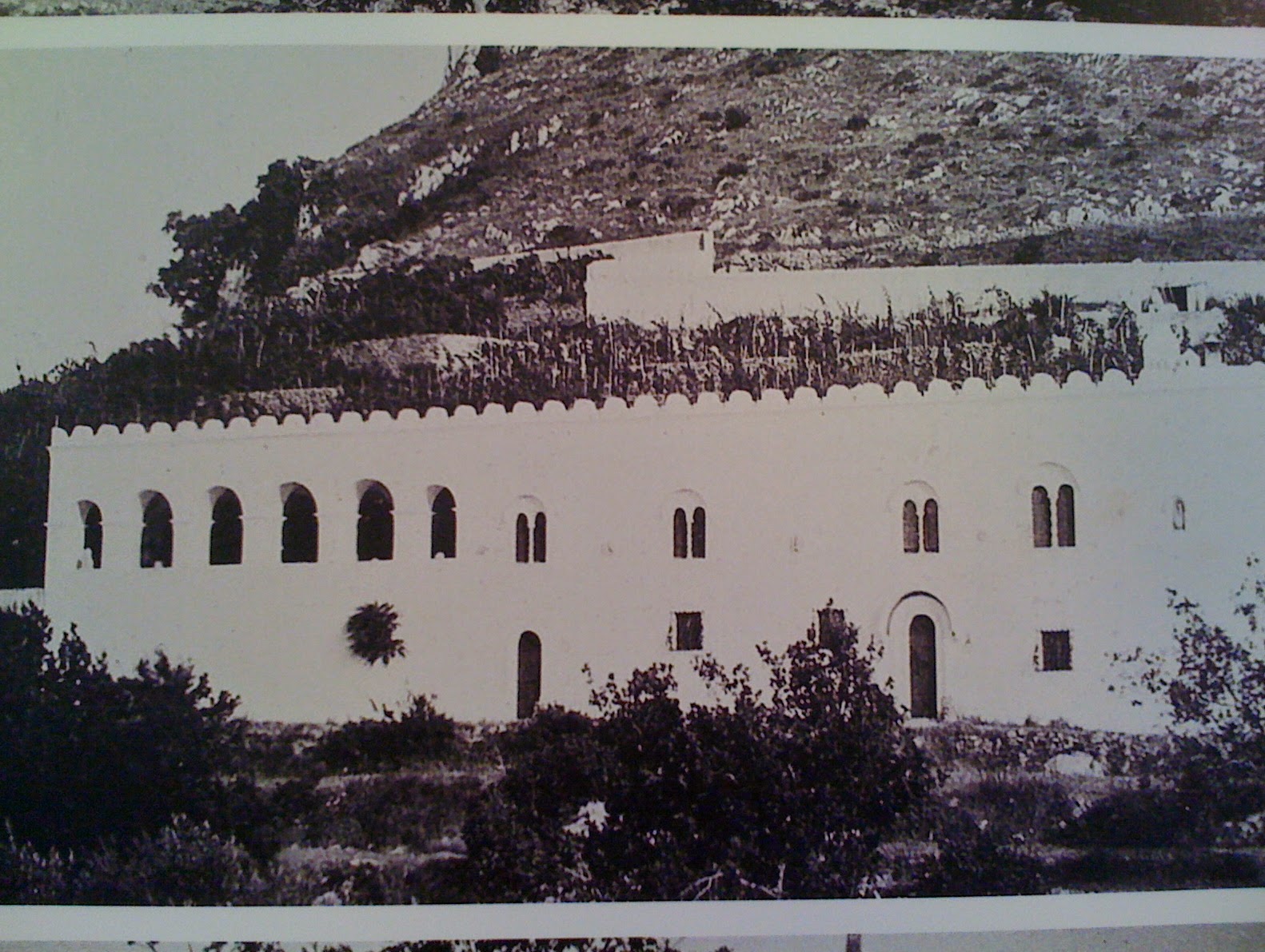 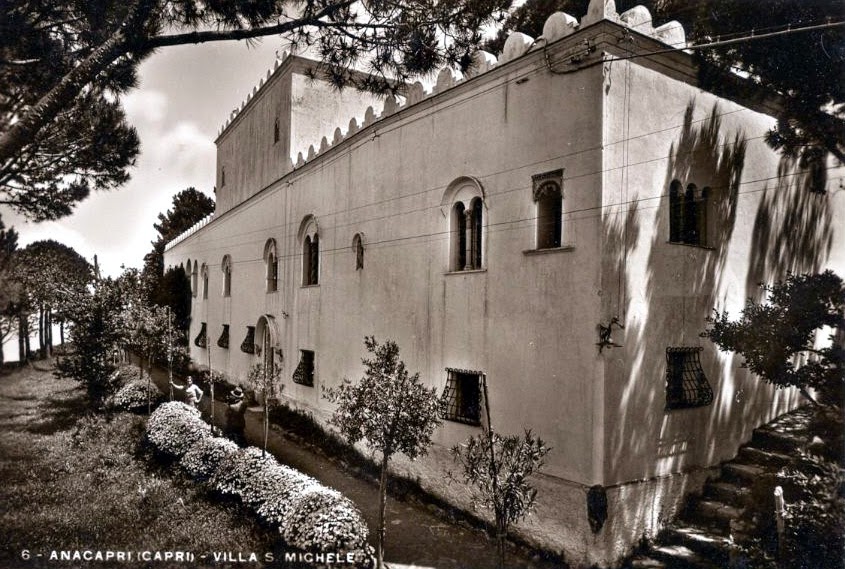 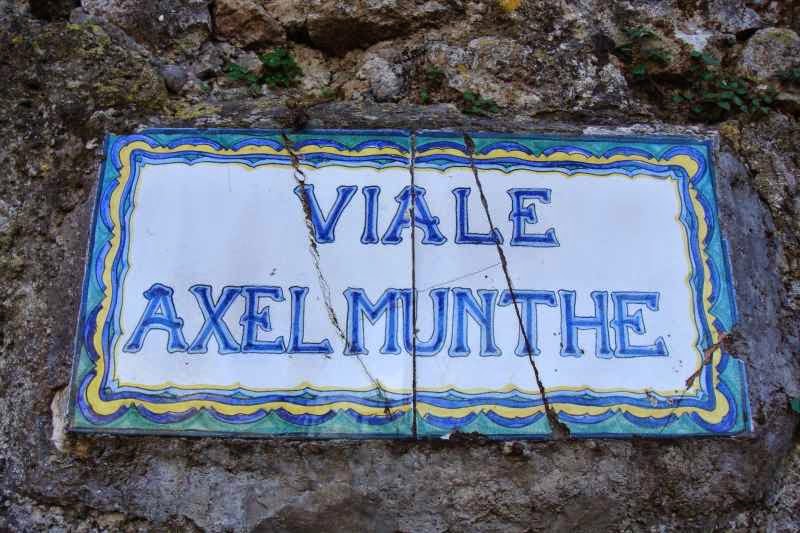 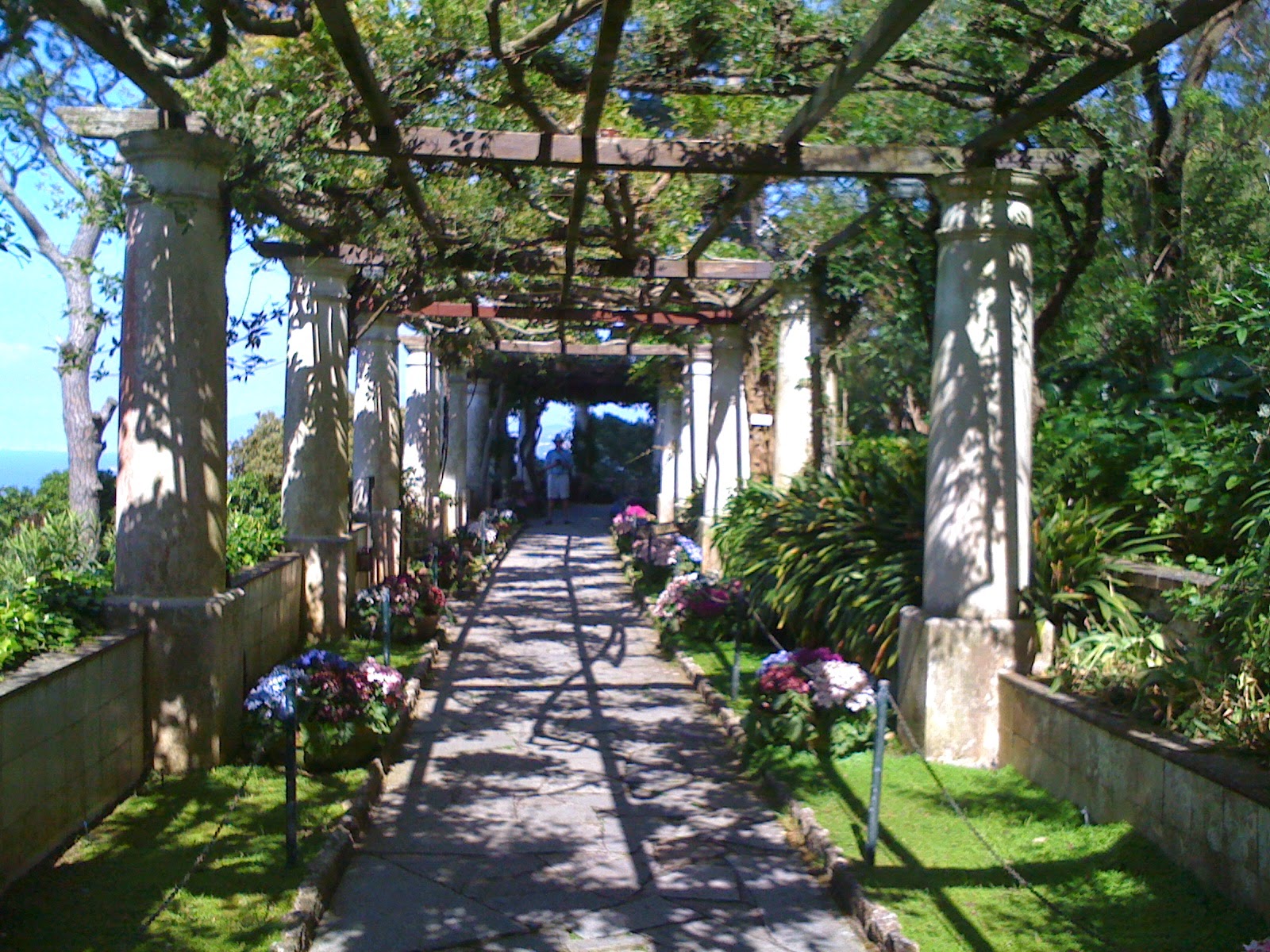 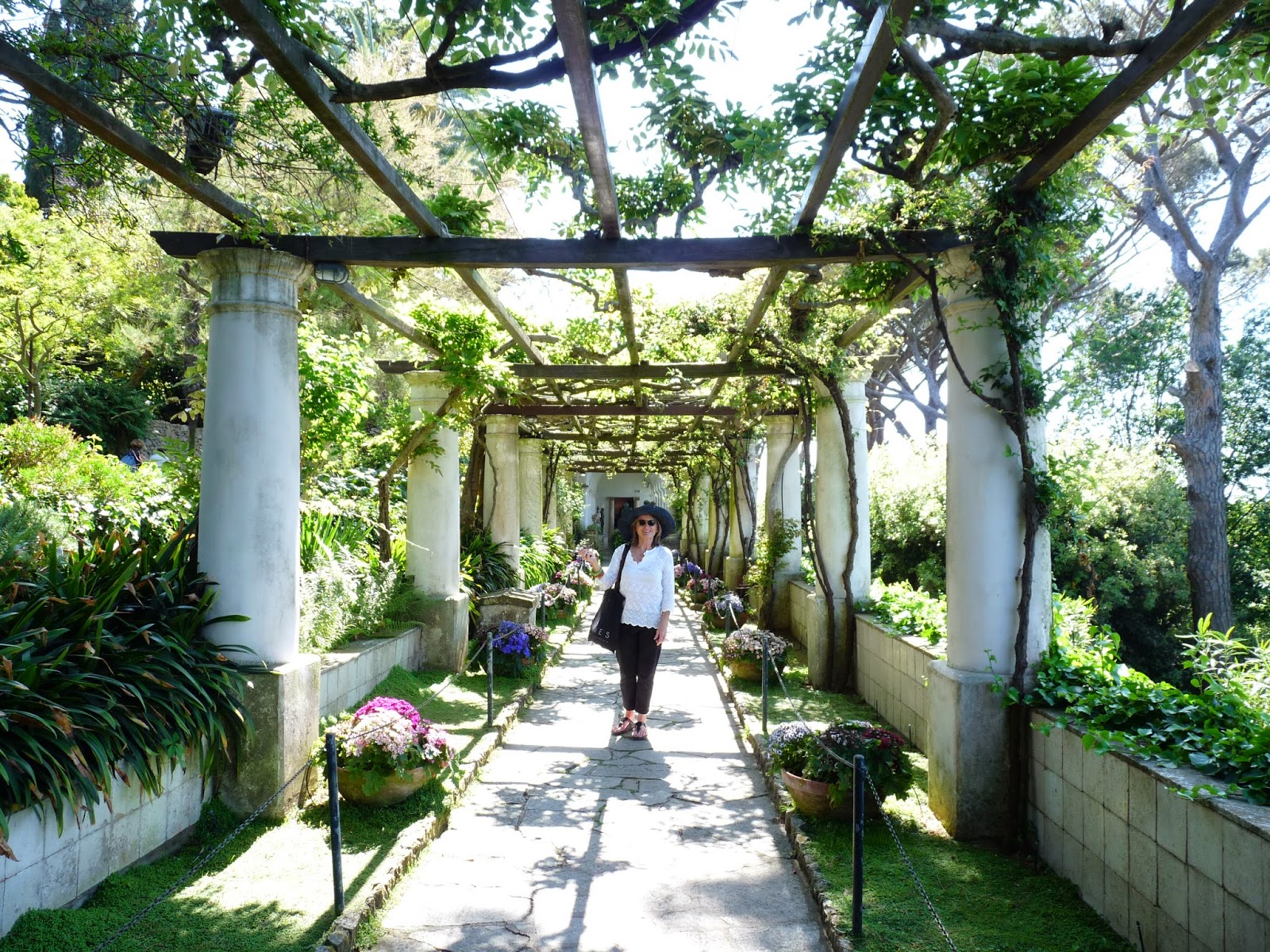 Last week I walked down the loggia of Villa San Michele, past the chapel and saw his sphinx. It sat looking out over Capri, face hidden from view, carved in Egypt, transported to Italy by one of the Caesars ... perhaps by Julius as a gift from Cleopatra ... perhaps by Tiberius who built his summer home on the foundation of San Michele, but most likely by Nero who built a villa in Calabria on the mainland, beneath whose ruins Munthe saw the sphinx, in a dream. Decades later he recovered the sculpture and transported it up the 777 Phoenicians steps and placed it on a wall jutting out from the San Michele chapel. 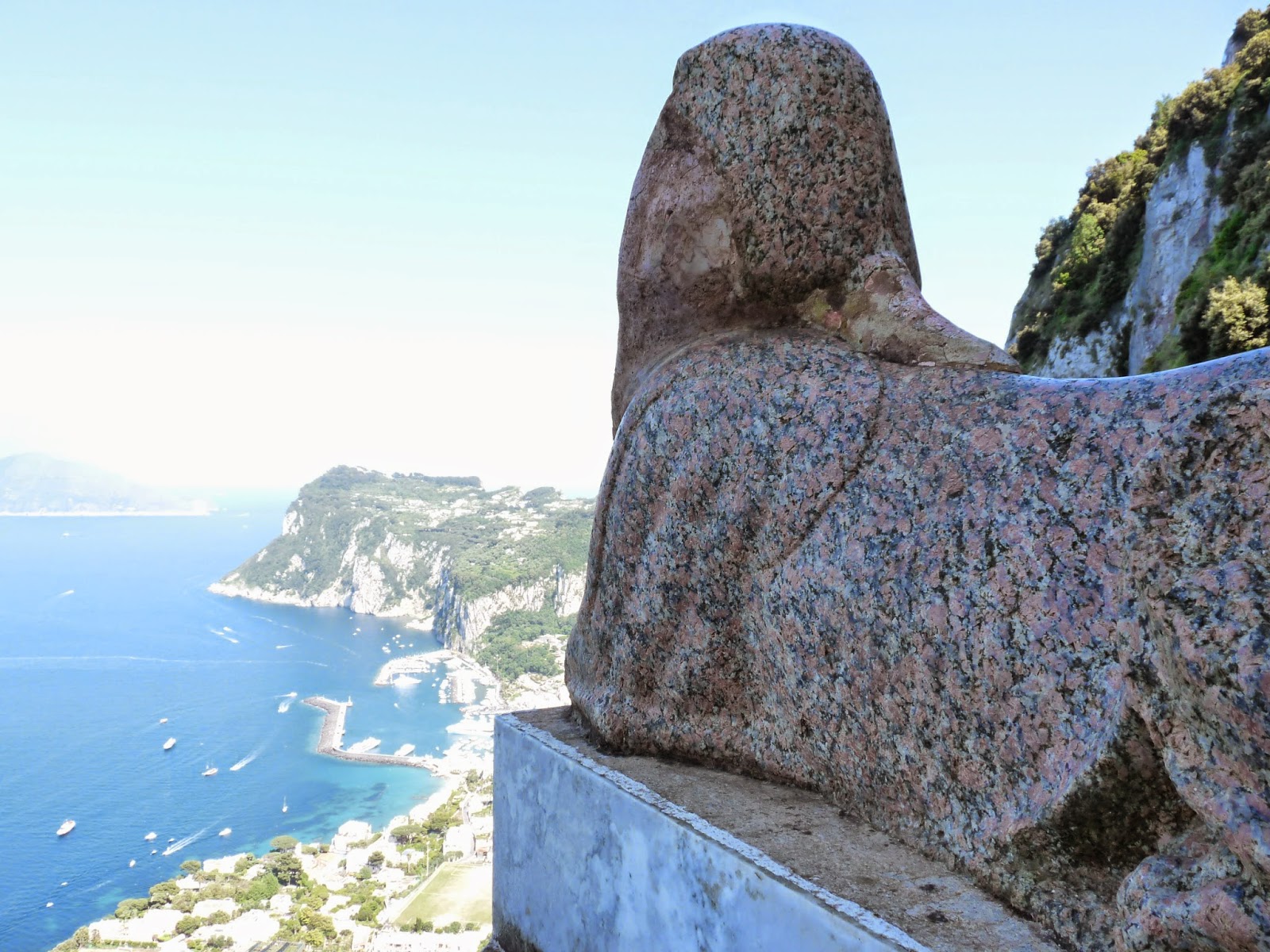 I stroll through the open courtyards of the Villa where terrazzo floors are almost identical to those left behind across the bay in Pompeii. 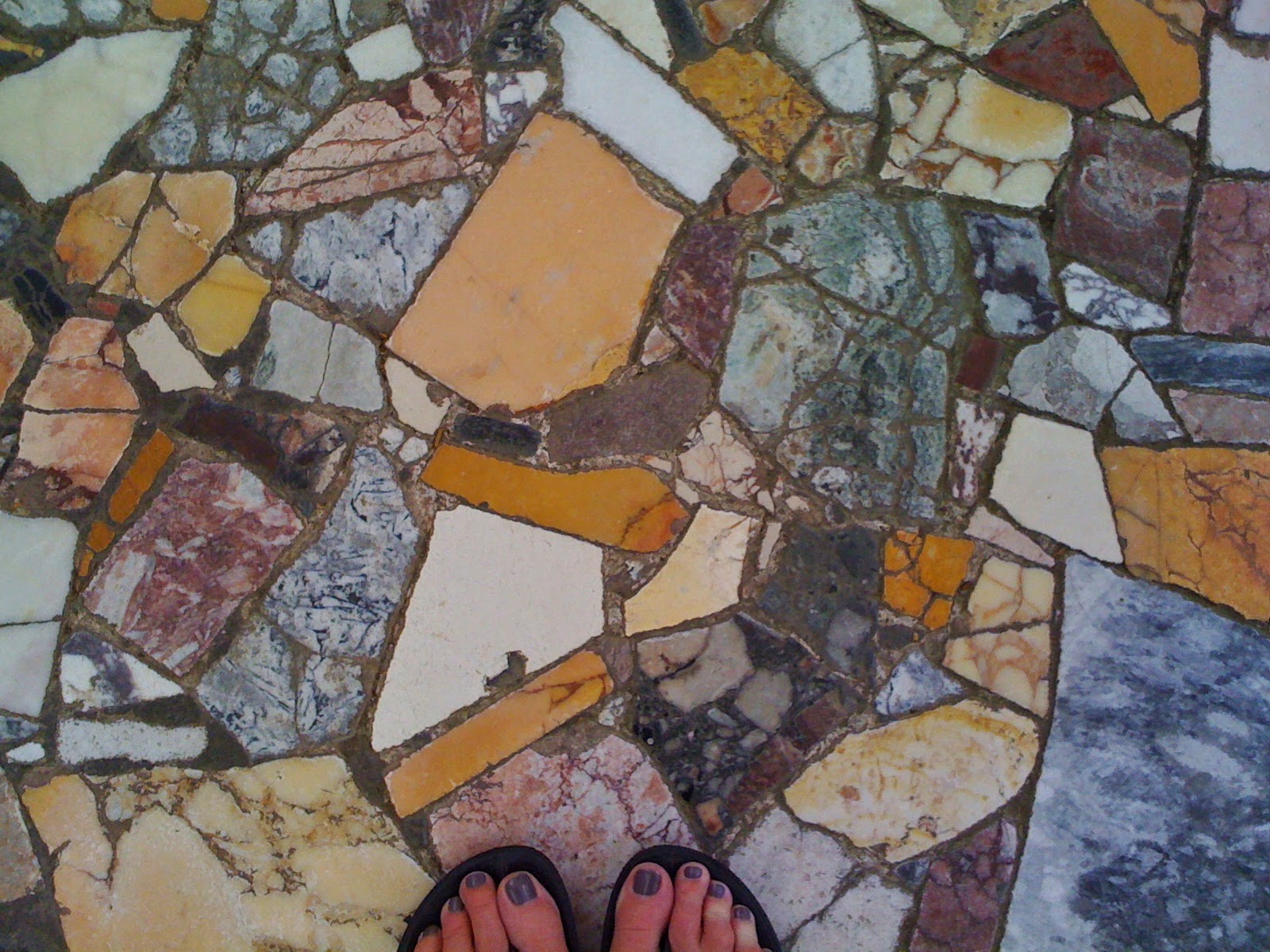 I sit up on the roof terrace in the sunshine drinking coffee and listening to birdsong, as Munthe probably did – surrounded by his orange and lemon trees, looking through the stone pines to that incredible view and I try to imagine that fifteen year old girl who disappeared into the pages of a book called The Story of of San Michele

But it’s impossible to write of Mediterranean gardens, without mentioning another garden high above the sea at Ravello. The Villa Cimbrone stands on a treed rocky outcrop from which it got its name – Cimbronium – the Roman word for a wood or forest used for building ships. The earliest references to the villa date back to the eleventh century AD, when the villa belonged to the Accongiogioco family. 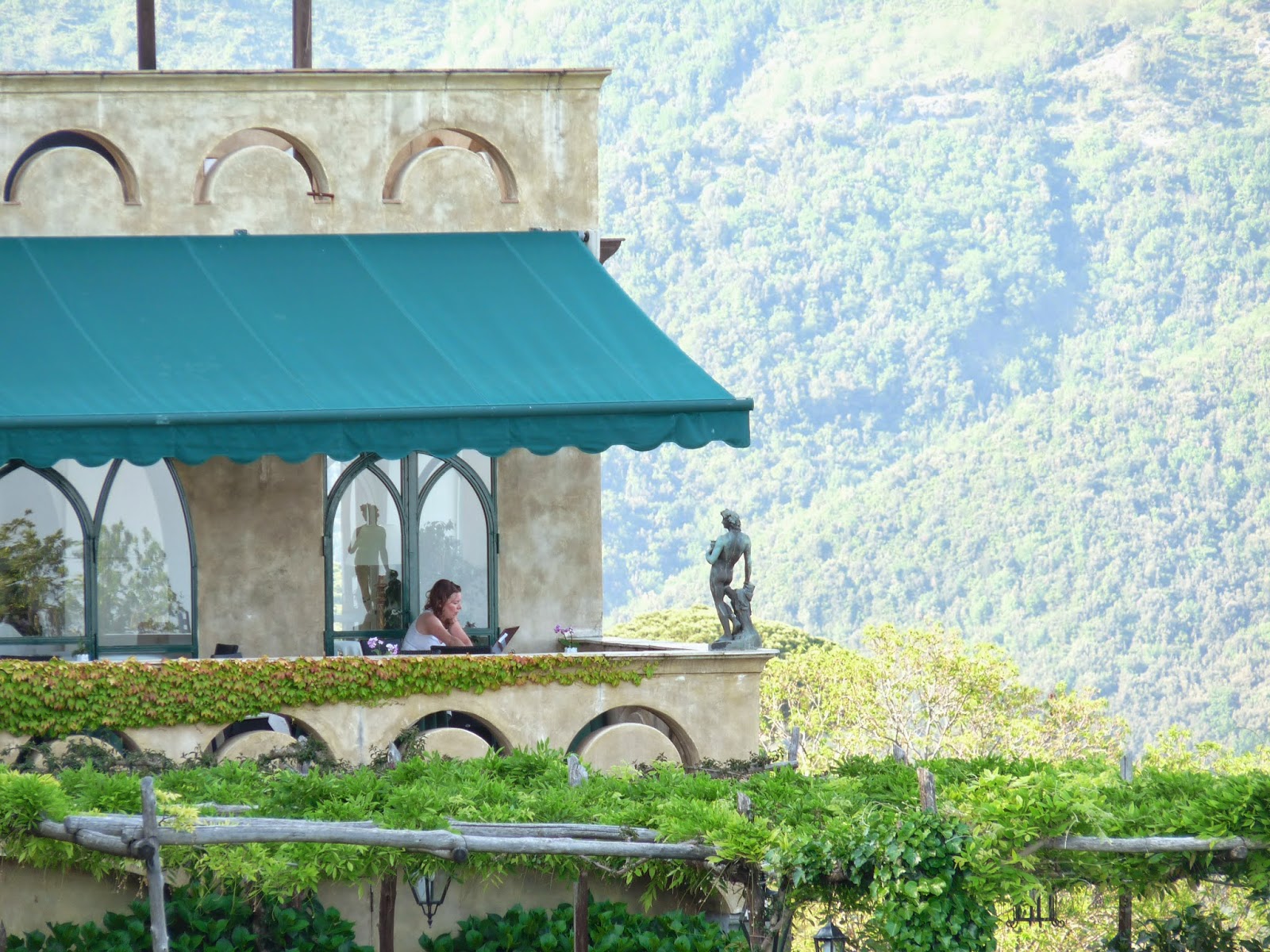 Earnest William Beckett visited the villa during his travels in Italy and fell in love with it. He bought it from the Amici family in 1904, and with the help of Nicola Mansi, a tailor-barber-builder from Ravello restored and enlarged the villa and garden and its battlements, terraces and cloisters in a mixture of mock-Gothic, Moorish and Venetian architectural style. The original layout of the Italianate garden was kept, but a strong influence of the English landscape gardeners, Edwin Luytens and Gertrude Jekyll can be felt.

I visit in a quiet time between seasons when the wisteria has finished flowering and the first flush of roses is over and the hydrangea are not yet in bloom. But without the distraction of colour, the garden shows its bones and its tracery of veins. The villa is reached on foot via many steps from the Ravello piazza and the garden is strung out all along the cliff high above the sea.

Immmediately beyond the 16th century entrance, is the cloister with its graceful little courtyard in Moorish-Norman style. 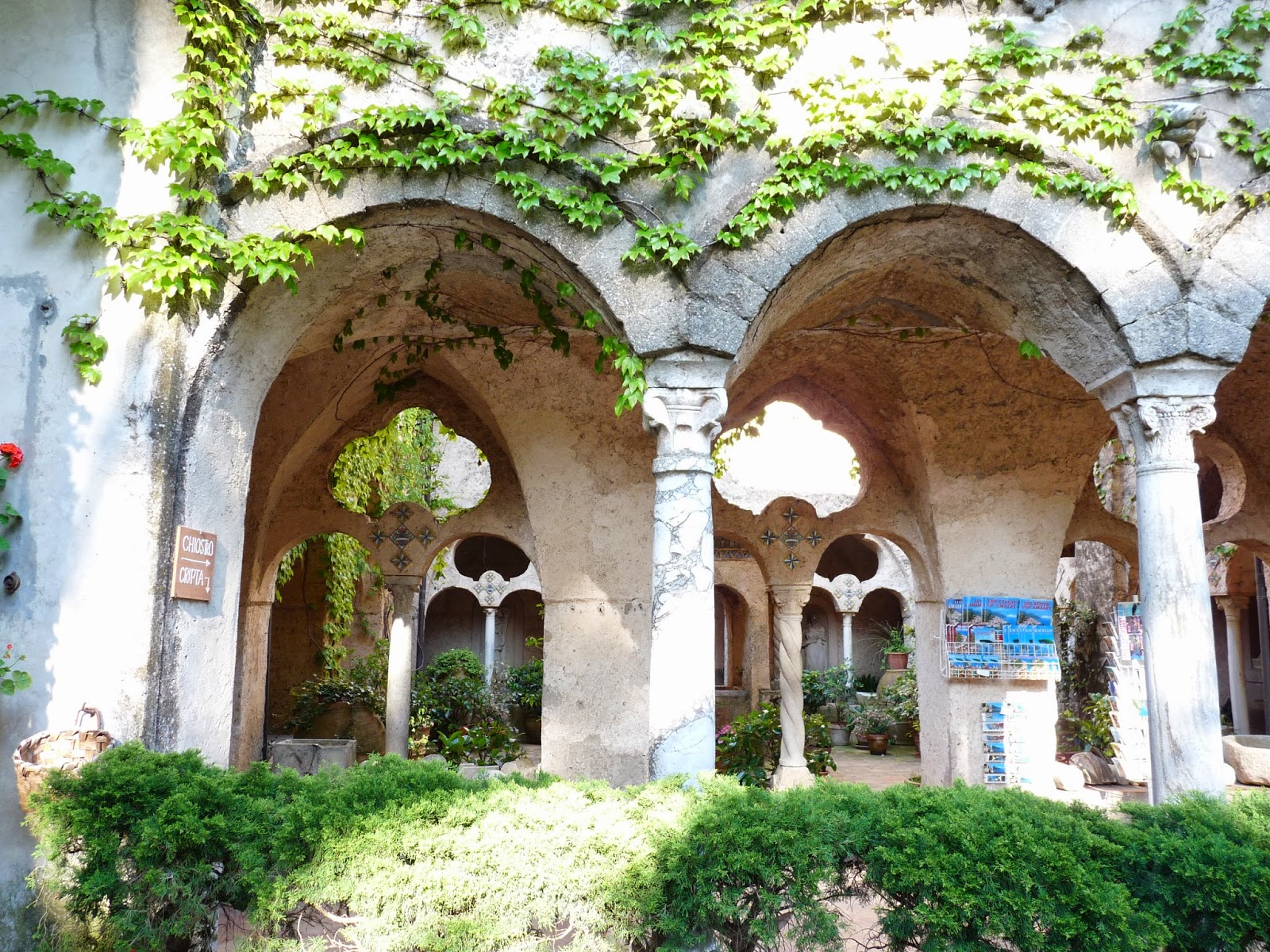 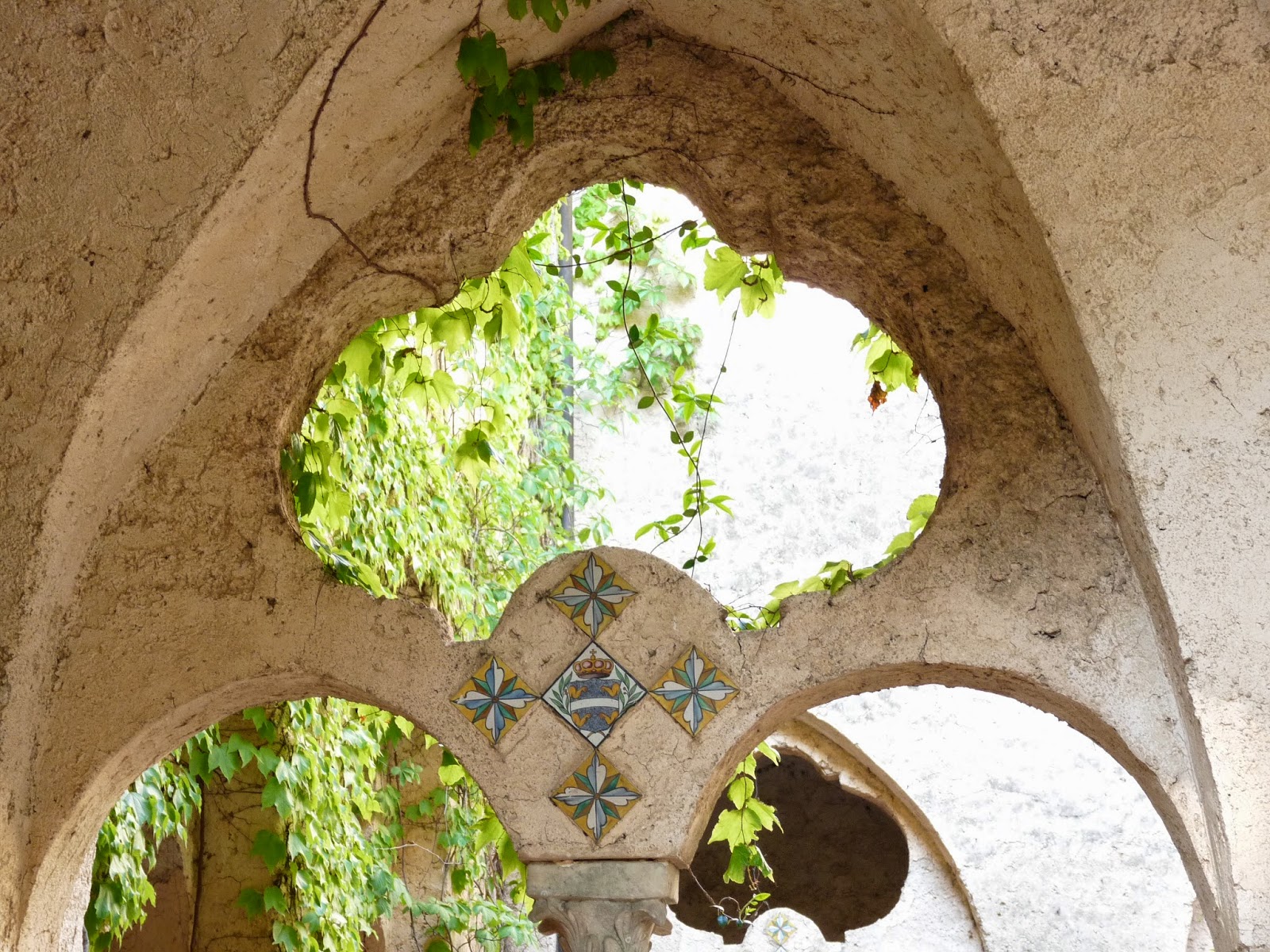 This leads along an avenue that takes you to the Belvedere and the Terrazzo dell'lnfinito, lined with marble busts. 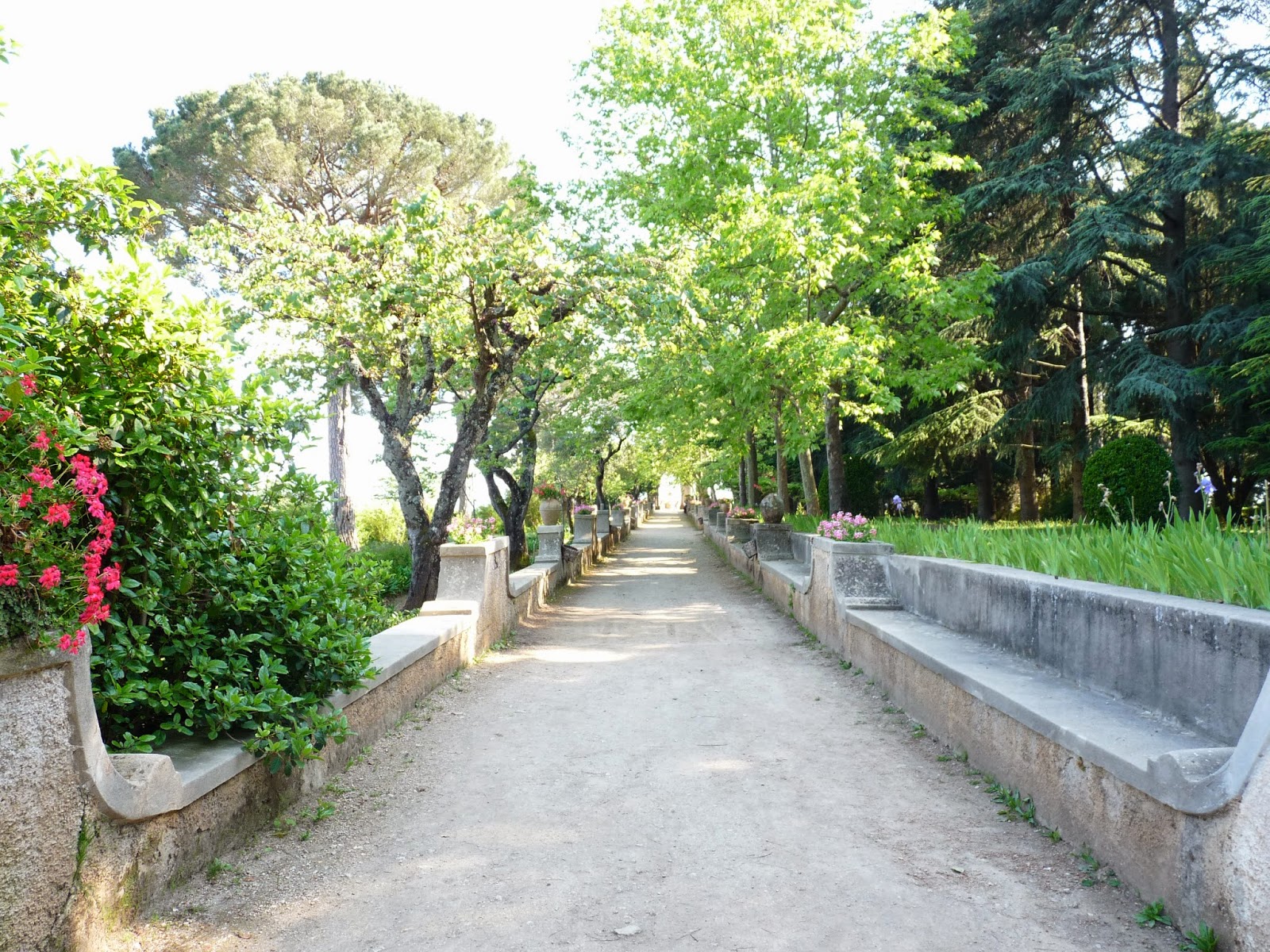 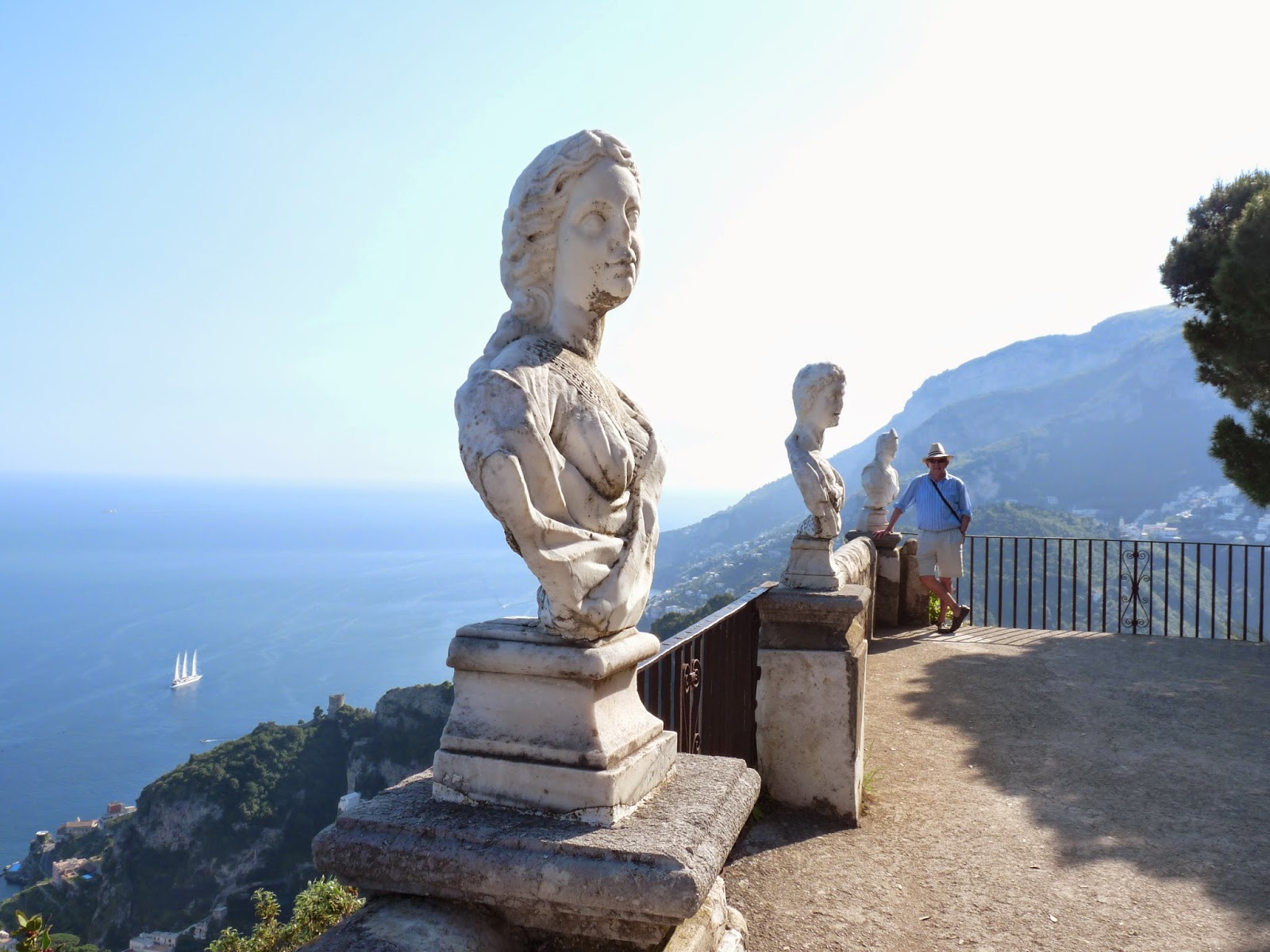 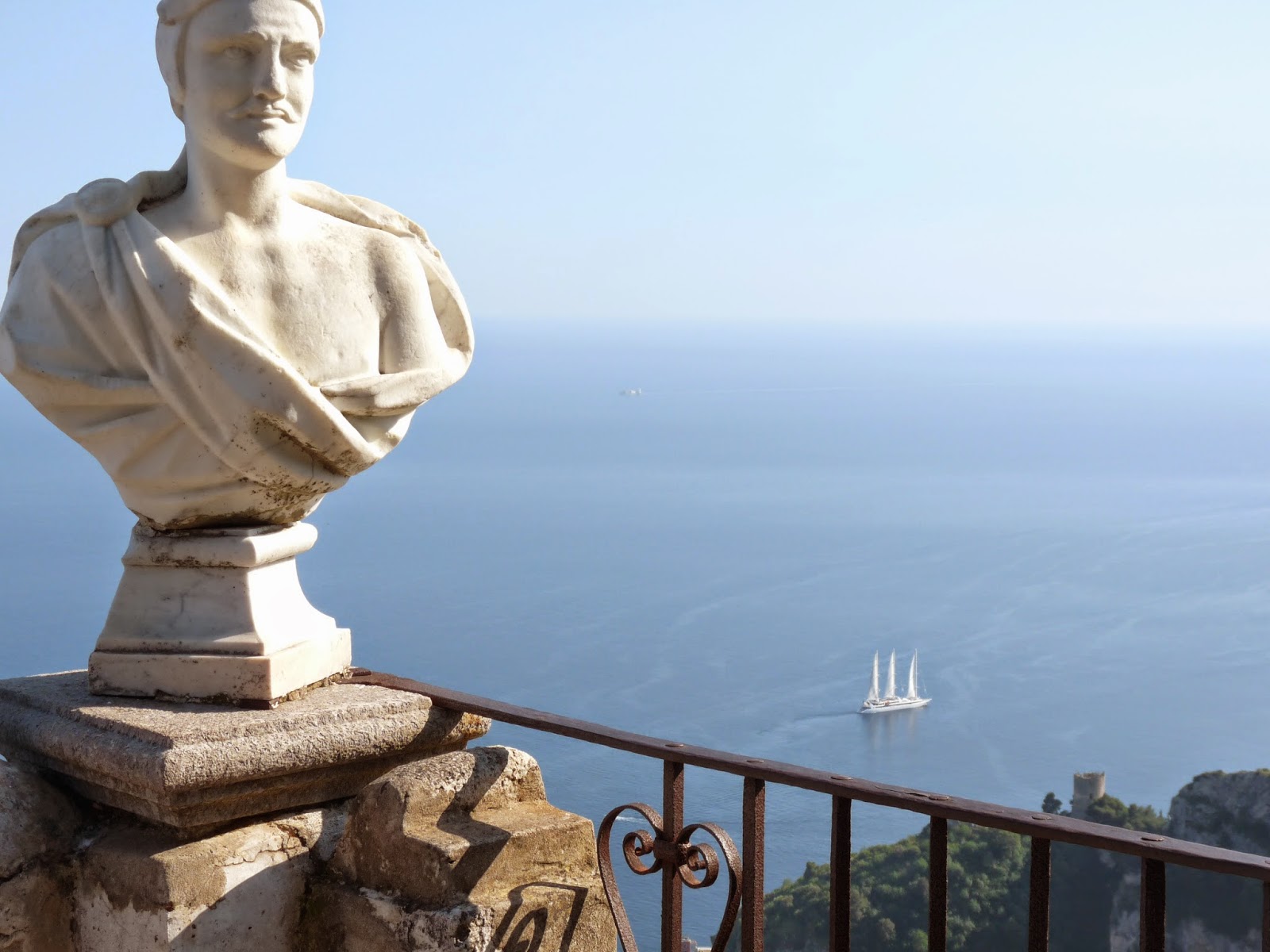 The Seat of Mercury overlooking the terraces, is an 18th century bronze copy of ‘Hermes at rest’. The original is on display at the national museum in Naples. 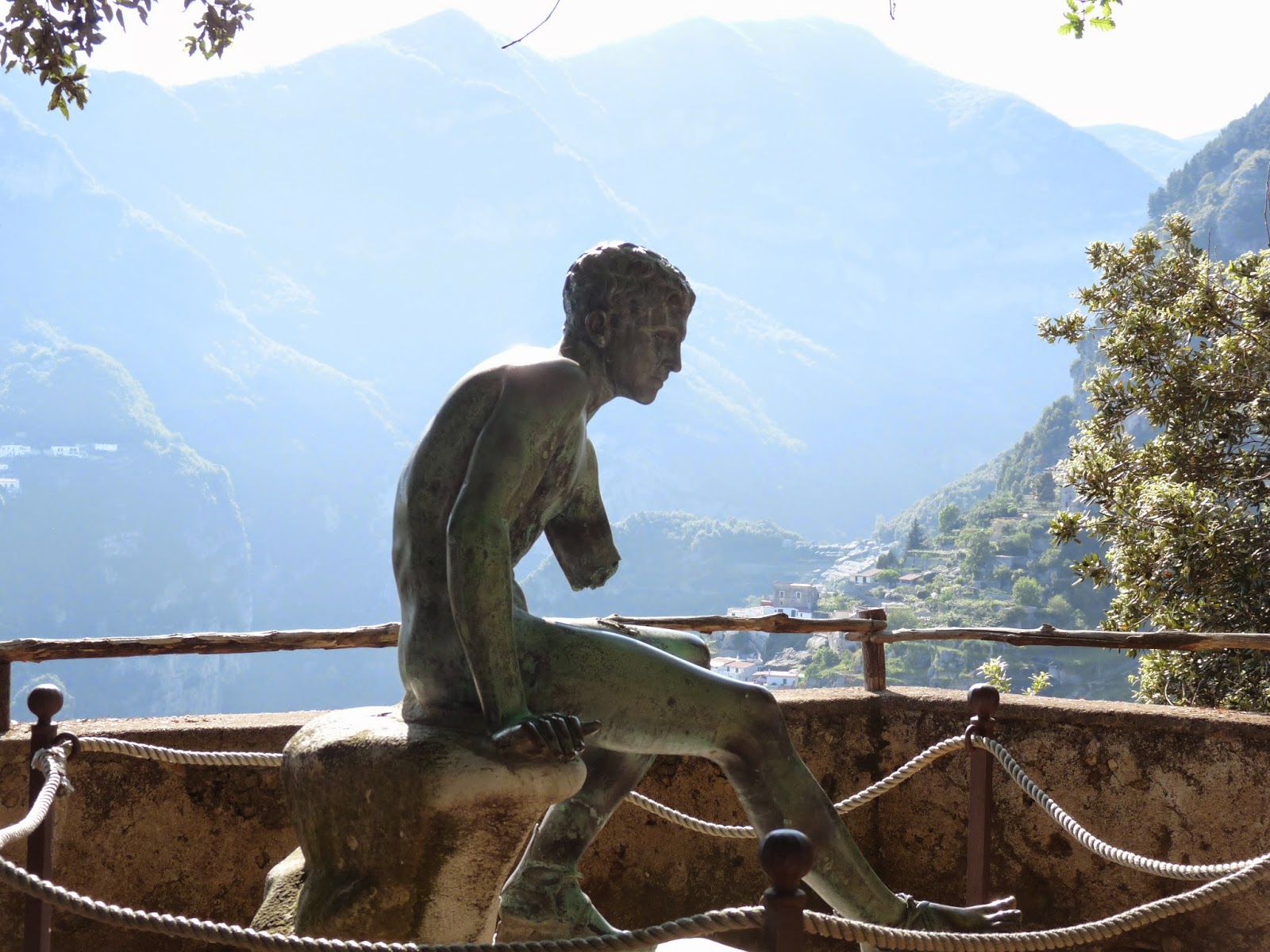 The Hortensia Avenue with it wrought iron well at one end and pergola supported by substantial round terracotta columns, shows renaissance references and inspiration of the Medici villas. 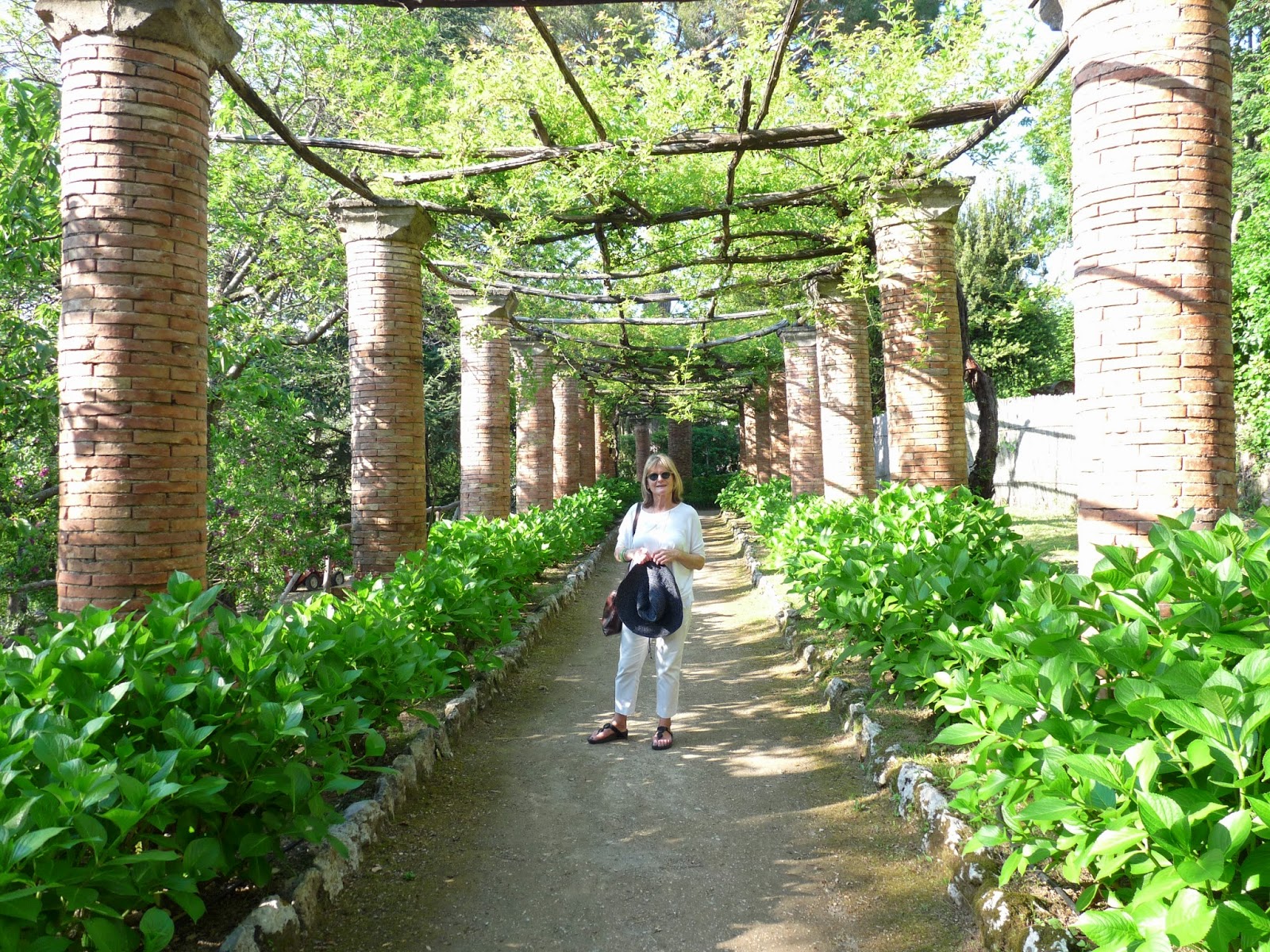 Through a meandering clipped box hedge is the bronze statue of David, produced by the Neapolitan sculptor Gioacchino Varlese, in imitation of the one by Verrocchio in Florence. 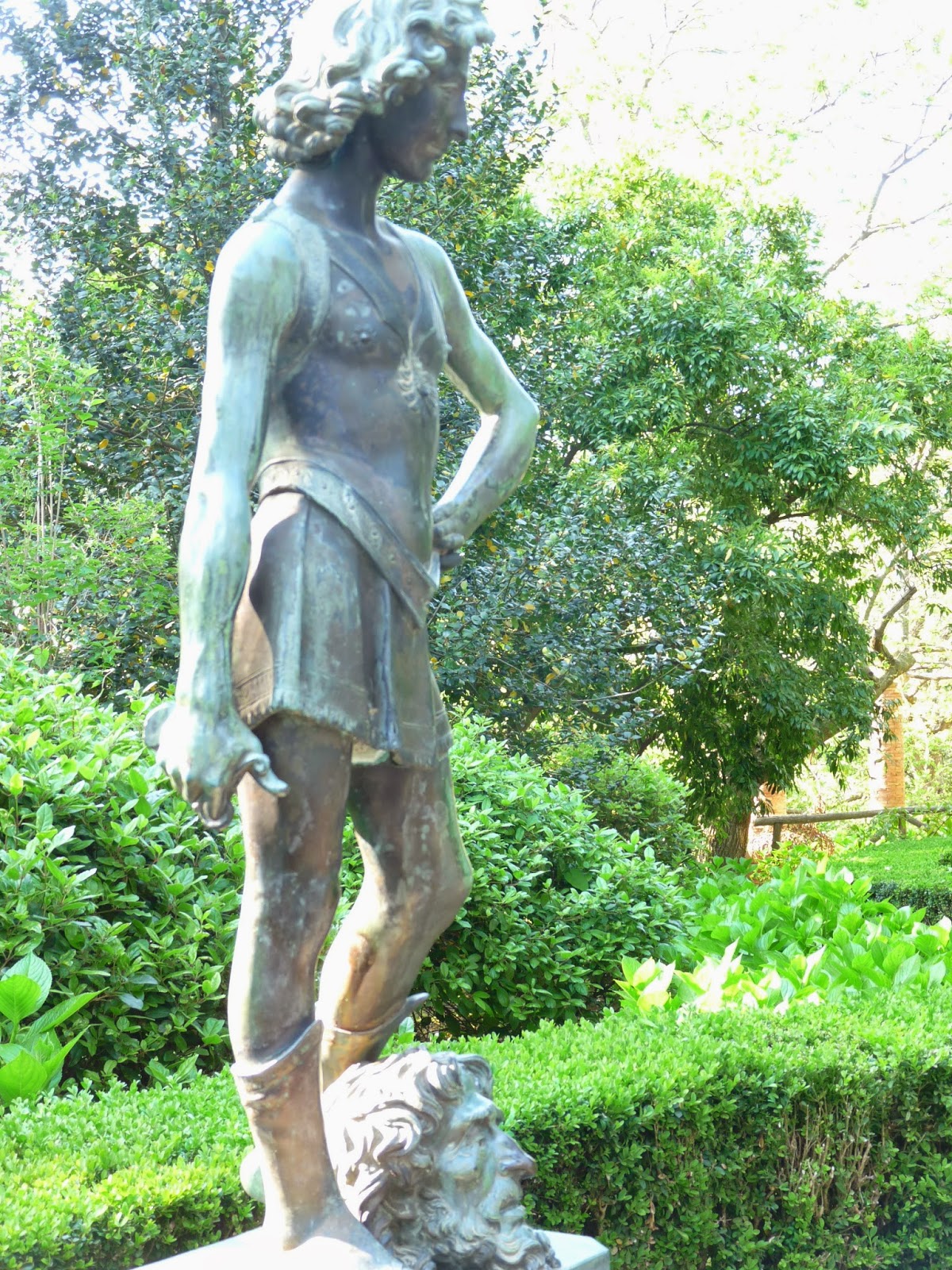 In the rose garden there are strong Moorish influences with wonderful tiles and a stone bench with a verse by Omar Khayyam: “Ah moon of my delight which knows no decline, the moon in the sky is rising once more. But as it rises again in future, in this very garden, it will look for us in vain.” 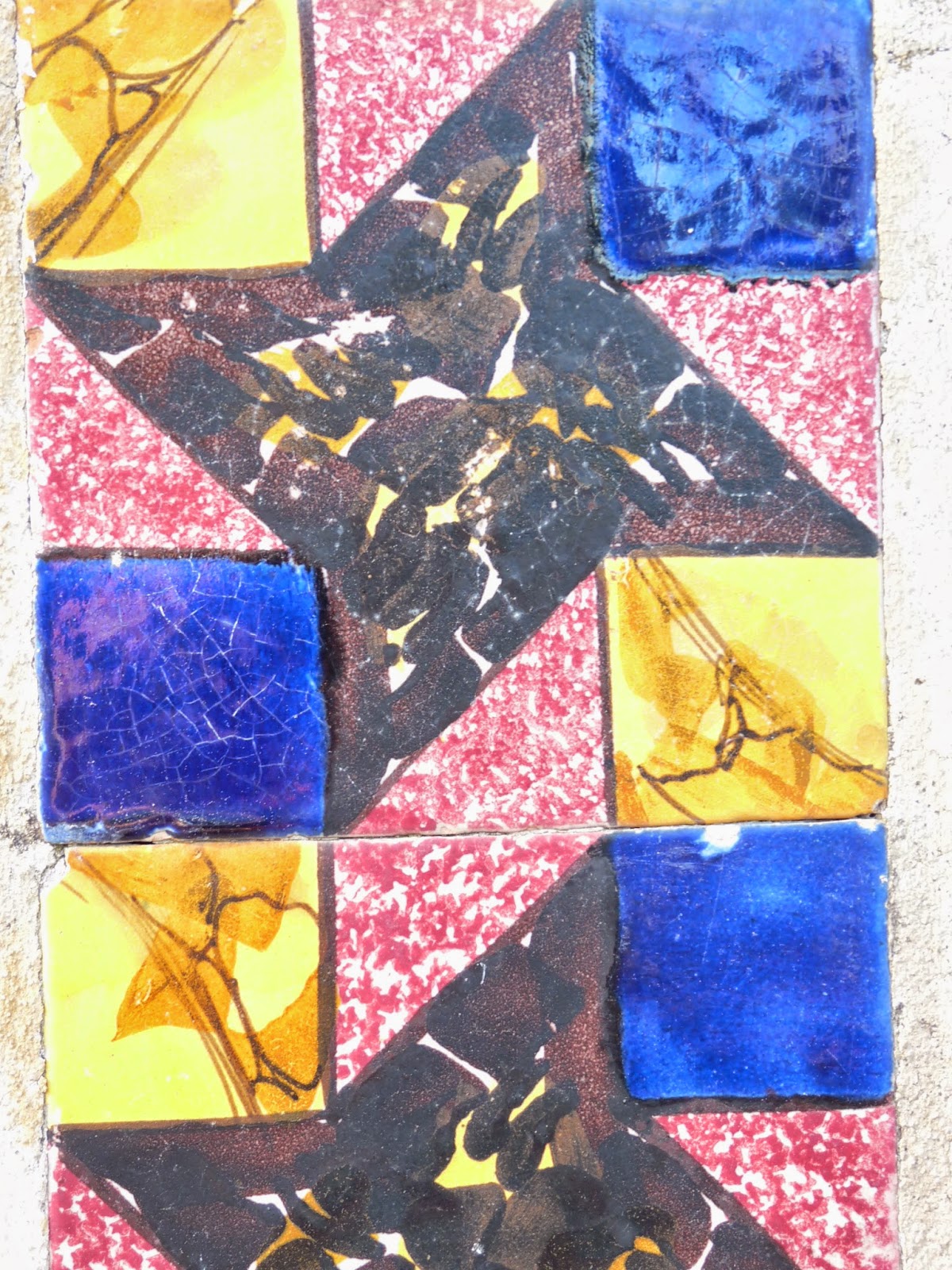 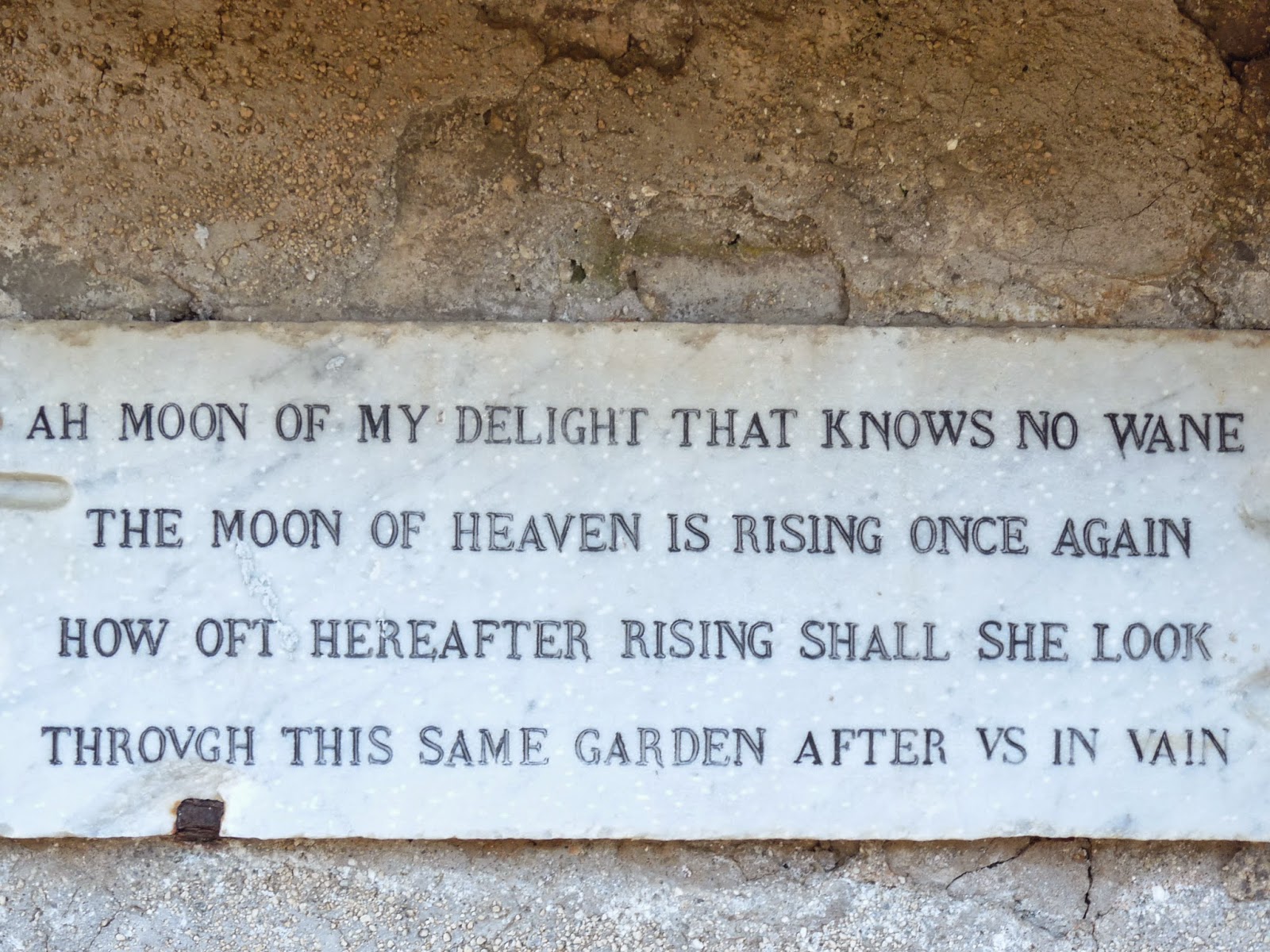 And in the rose garden the wrestler, Greucante. 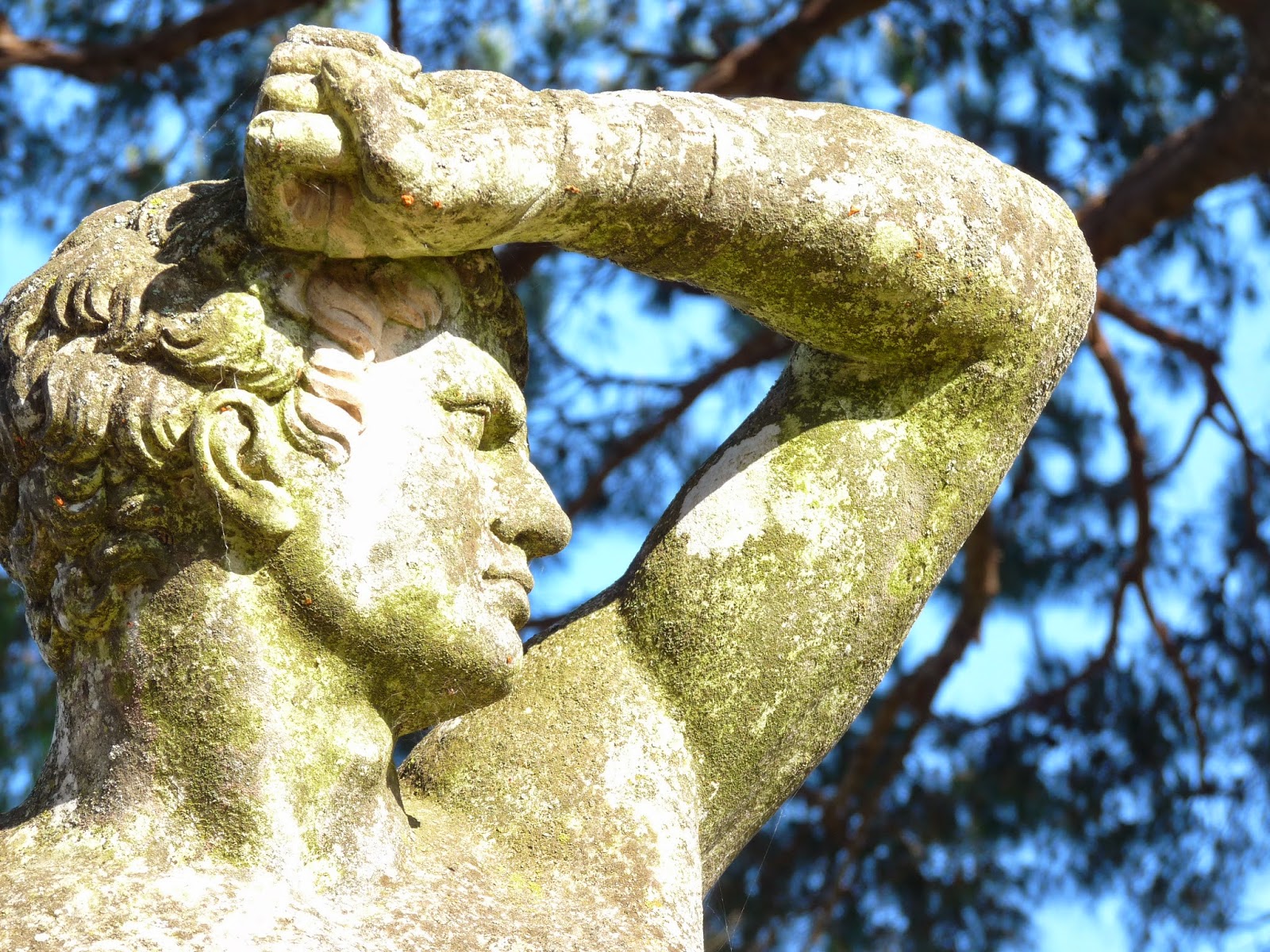 Visit late in the afternoon when the tourists have left and the light is sublime, and the views that drop down to the steep terraces below, spectacular. 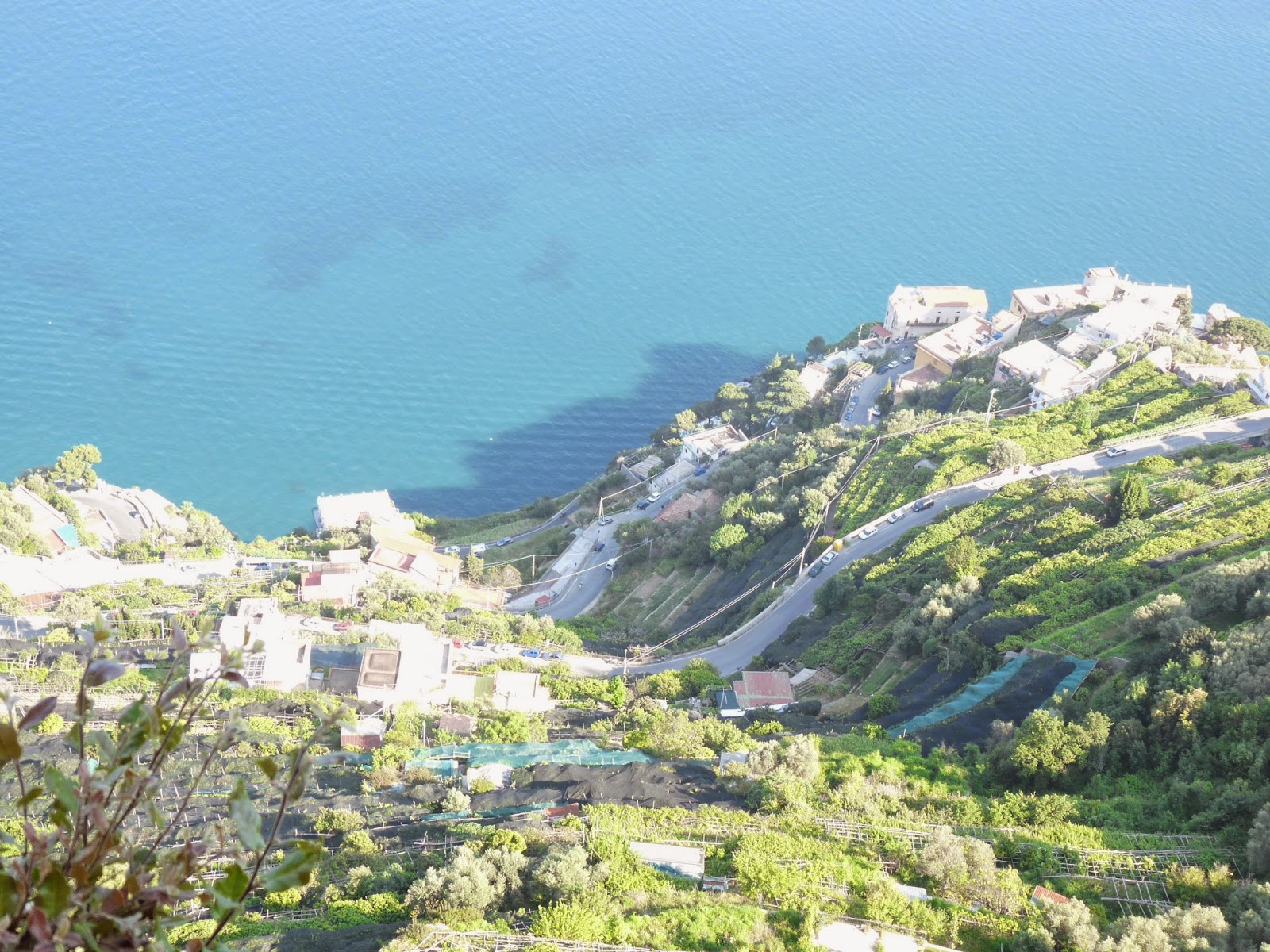 From these gardens, caught midway in taking off my hat, I say goodbye to the History Girls. It's been wonderful being part of this group. But just because I'm not writing won't mean I'm not following. 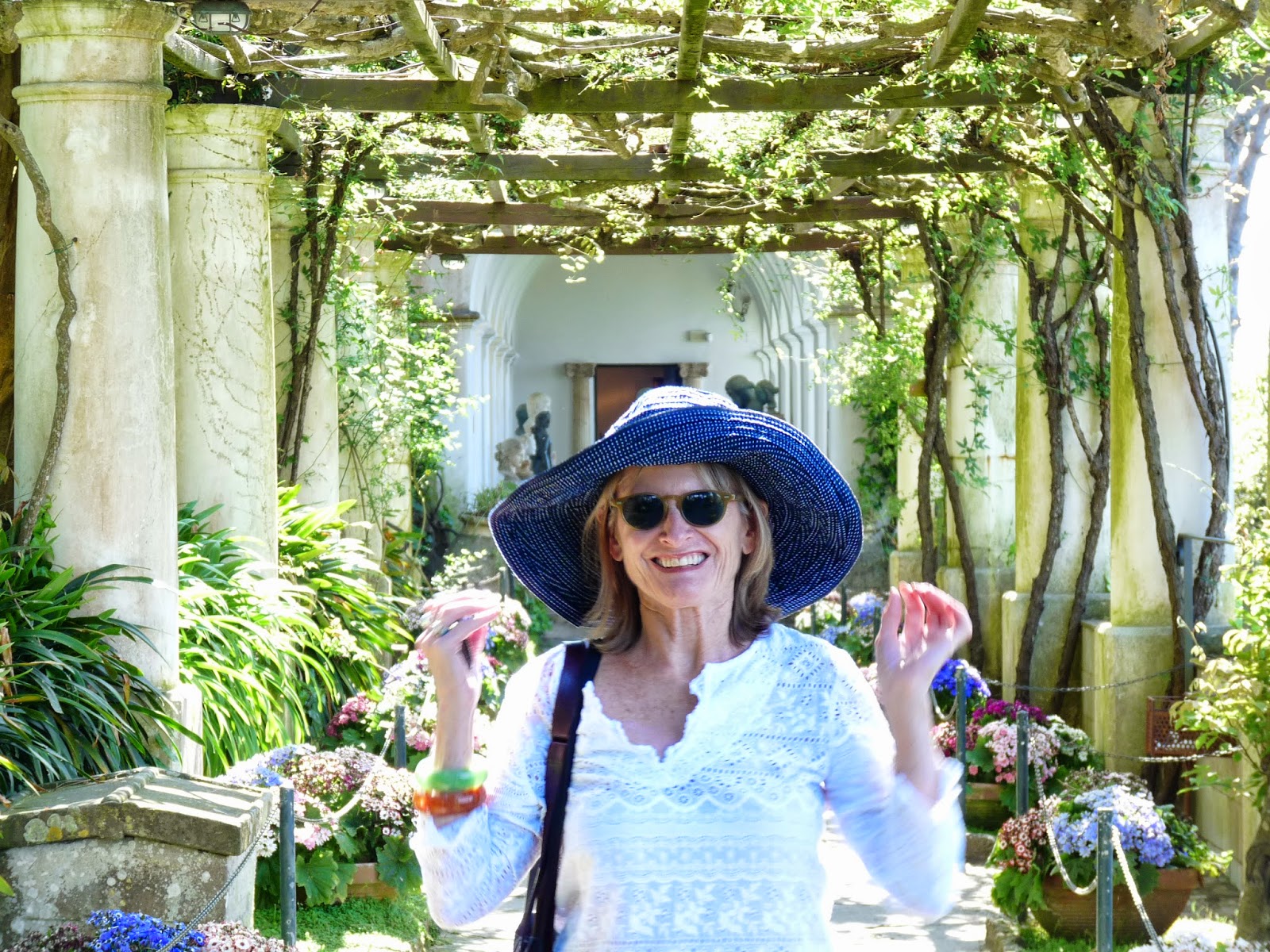 www.diannehofmeyr.com
Posted by Dianne Hofmeyr at 01:10

Wonderful place, wonderful photos - thank you so much for it all!

I've only just caught up with this wonderful post, Dianne. You will be a great loss to the History Girls, your posts are invariably light, entertaining, very much 'you' but, at the same time, full of depth and fascinating details - and stunning photographs. Sorry I didn't comment before. I hope you see this - you will be much missed!