Over the past month, I've been painting the Seven Wonders of the Ancient World (for the e-covers of my Seven Fabulous Wonders series, but that's just an excuse for some fun). In doing so, I unearthed one of the strangest creatures in history... the Babylonian "dragon", shown here on the Ishtar Gate, constructed around 575BC by King Nebuchadnezzar II:


The two children are playing a game called Twenty Squares - sometimes called the Royal Game of Ur - on a simple board scratched into the pavement, just as the guards of Babylon might have done to pass the long hours of their shift. The walls of Babylon are blue-glazed brick with gold bricks for decoration, and on the gate you can see two types of creature that are extinct today - aurochs and sirrush. The dragon perched on the top left is obviously my fantasy side rearing its ugly horned head... but in case you think I've invented the creatures entirely, here is a reconstruction of the Ishtar Gate in the Pergamon Museum in Berlin, which uses the original bricks found at Babylon:

There also is/was (I believe it suffered in the recent war) a replica of the Ishtar Gate in Iraq, too:


You may scoff at the idea of flying, fire-breathing dragons straight out of a fantasy novel. But auroch skeletons have been found, and the bulls shown on the Ishtar Gate are now accepted as an extinct creature that once roamed the banks of the Euphrates. So why not the other creature... the dragon?


You'll see it has a single straight horn in the middle of its forehead and a curly horn (or ears?) at the back. It also seems to have scales and a thin lizard-like body, much like dragons that could possibly be descended from dinosaurs. It has bird-like claws on its hind legs, but those paws on its forelegs look more like a lion's, and it seems to have hairy (or feathery?) legs. Significantly, it has no wings. Some people think it might actually be a unicorn - another creature that has made the leap into legend. The Babylonian texts call it a 'sirrush' or 'mushussu'/'mushkuku' (depending on how you interpret the cuneiform), and it is shown on cylinder seals of the period being led by a halter, where it appears to be about the size of a large dog.

So what do you think? Did this creature exist? Have we just not found its skeleton yet, or maybe mistaken its bones for those of other creatures - lions/birds/lizards? In my story, the sirrush sheds its skin like a snake and emerges with a pair of beautiful wings, explaining how it might have flown away into legend. 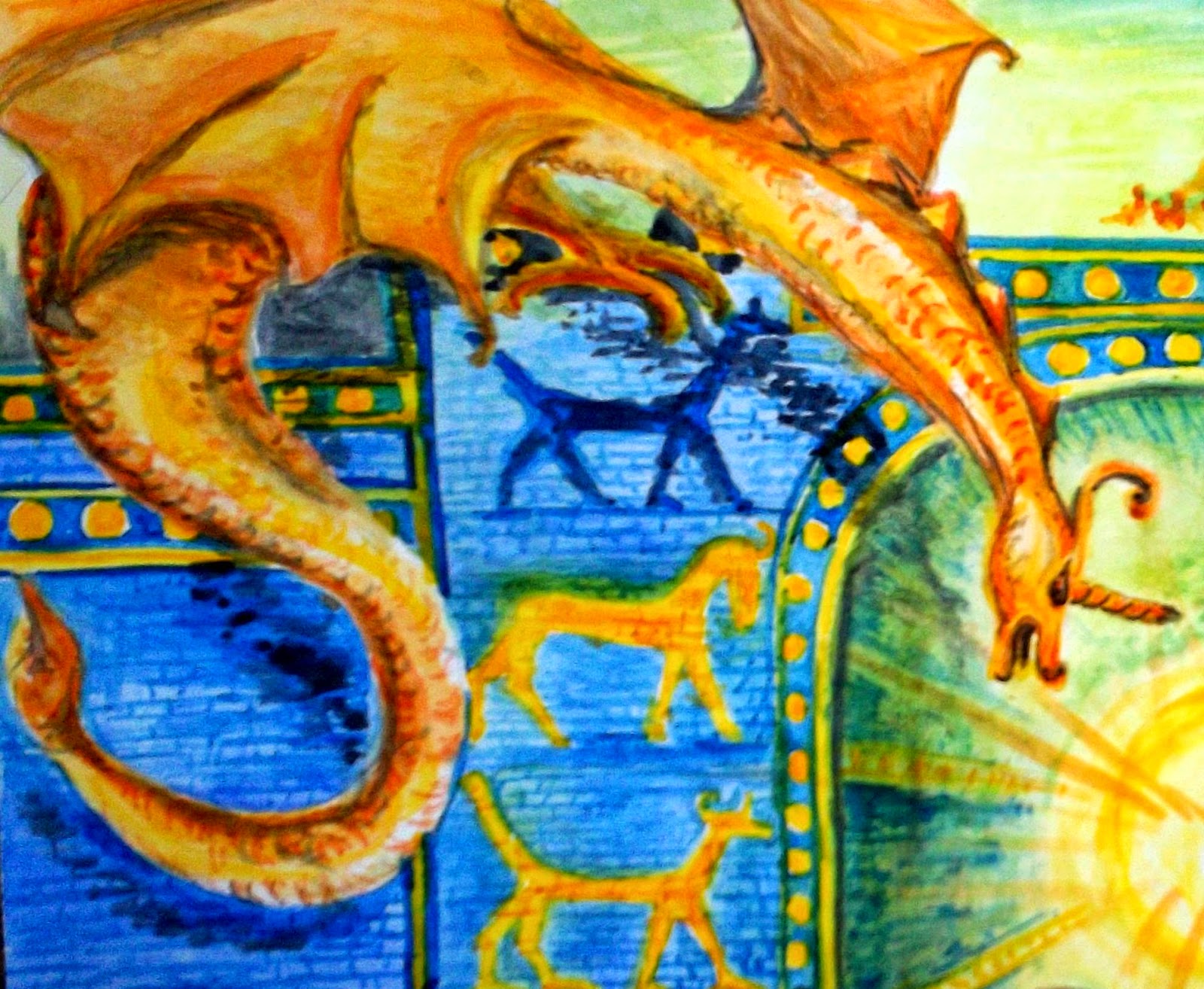 It's not too big a leap of imagination (at least not for me!) to believe a few remaining dragons might have been kept alive in a royal garden or park such as the second Wonder of the Ancient World, the fabled Hanging Gardens of Babylon. Perhaps this vanished Wonder was actually an exotic zoo, as imagined by my Japanese publisher?


Whether Babylonian dragons existed or not, they are certainly alive and kicking in my book. And now they have entered the 21st century on the ecover, which after some digital wizardry looks like this:

www.katherineroberts.co.uk
Posted by Katherine Roberts at 01:00

Have you ever read Andre Norton's Dragon Magic? It featured a Babylonian dragon.

Interesting you should mention Andre Norton. As a teenager I used to devour her books, although 'Dragon Magic' doesn't ring any bells so if I did read it, I've obviously forgotten the title! Will have to see if I can find it, I'm curious now...

Also for Babylon fans... Agatha Christie and her husband brought back lots of cuneiform tablets etc. from their travels around Mesopotamia, so you can actually see some Babylonian history stored in the drawers of her holiday home Greenway beside the River Dart - see Adele's post above!