THE SUMMER QUEEN: Finding Eleanor of Aquitaine by Elizabeth Chadwick. 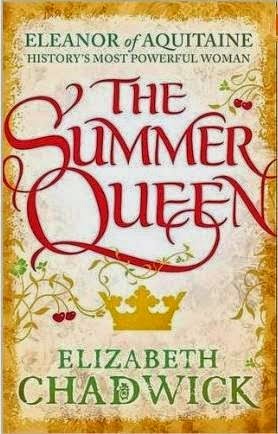 In early June in the UK and  July 1st in the USA, my novel THE SUMMER QUEEN is being published in paperback.  It's the first in a contracted 3 book series about Eleanor of Aquitaine.
I find it entertaining that my UK publishers have called her 'History's most powerful woman' on the jacket shoutline, because personally I'm not sure that she was in her own lifetime. I suppose she is immensely powerful in that the myths, legends and misinformation about her have created a massive groundswell of interest that keep her at celebrity level even today.

The novel was published in hardcover in the UK this time last year and since then I have received numerous reader letters saying 'I love Eleanor of Aquitaine. I didn't think anything new could be said about her, but you have surprised me and refreshed my awareness...you have made me stop and think.'

So, how did I come to add my own work to this frequently trodden path and what's my take?
I had been thinking about writing my own novel about Eleanor for some time. The twelfth century is one of my main stamping grounds as a writer and Eleanor has often had cameo roles in my novels. I had a couple of biographies of her on my book shelves as part of my general reference works and I often came across her in reading other research pieces. I  encountered her in fiction too at times and my curiosity about her grew down the years.  What was she really like?

On reader and history buff forums she was frequently described as a 'powerful woman ahead of her time.' The view was that she was dominant and feisty and would allow no man to put her down or quell her spirit. She was also an alluring femme fatale, accused of having affairs with her uncle and her second husband's father.  Following a marriage to the milksop Louis VII of France who found her too hot to handle, She had a passionate marriage with Henry II, rebelled against his love affair with Rosamund de Clifford, for which Henry imprisoned her for 15 years. Once free, she acted as regent for her son Richard and continued to lead a full and dramatic life until retiring in her last years to the convent at Fontevraud.

My UK editor was keen for me to tackle Eleanor - a woman from history with sales potential if ever there was one! Even in a crowded market place we felt there was room, and I certainly had a gut instinct that there was far more to be said about this remarkable woman if the detritus and accumulated greasepaint could be removed and original colours restored.I soon discovered that it was more easily said than done, not least because audiences have a fondness for that greasepaint and for that 'powerful woman ahead of her time.' The legend has often become the reality.

As I embarked on my research in detail, it  became clear that her biographers couldn't agree on anything about her; indeed some appeared to be writing novels of their own in the guise of biography. The academics frequently disagreed with the popular histories and with each other.  I found Eleanor married to Louis of France at both 15 and 13. Did it matter?  Well yes if I wanted to tell her story with integrity. The age of 13 as opposed to 15 would make an enormous different to the way I crafted her character. The one is barely out of childhood, the other is more knowing. (as it happened I went with 13 because no one else had written from that vein and it was the academics, not the biographers who were mostly arriving at that conclusion based on good reasoning and recent research).

I found Eleanor variously described  as having snapping black eyes, black hair and a curvaceous figure that never ran to fat in old age, or as a red head with humorous green eyes, or as a saucy hot-blooded blond whom her father was desperate to marry off before her promiscuous nature got the better of her. All very entertaining but there is not a single existing proven  description of Eleanor of Aquitaine that answers to any of those claims. She was given half-brothers who never existed - as I explained in an earlier History Girls blog. The half brother who never was  She was claimed to be a wild Amazon who gaily led her ladies on the 2nd crusade as if it was one long picnic. Or alternatively she was forced into going by her husband Louis VII.  The latter was portrayed as a god-fearing milksop whom Eleanor dominated, despite strong evidence of his violent temper and vicious mood swings. She had a passionate incestuous affair with her uncle or she didn't. My take on it is here: Raymond of Poitiers She had an affair with Geoffrey le Bel Count of Anjou or she didn't. She arranged her own divorce - or she didn't. She indulged secret liaisons with the young Henry of Anjou in Paris under her husband's  nose or she ... you get the picture.  No one could agree and most of the opinions were boiling down to personal biases and speculation. They might as well have been novels rather than non fiction.

My own take on Eleanor, having trawled the biographies and other works is that Eleanor was a woman very much of her time doing her best within the boundaries of what society would permit. Any attempt to push those boundaries was immediately and sometimes brutally squashed by her husbands, although she was nothing if not resilient. As to power: She was living at a time when the boundaries of royal women's power was in a state of flux and being redefined. During her marriage to Henry II, she actually wielded less power than any recent previous queen of England had done. Although never crowned queen, I include her mother in law Empress Matilda among them.

Perhaps the reference book I found most useful when writing The Summer Queen was this one - It's not so much a biography as a series of essays about Eleanor's life and times, and it sets out to put in context some of the myths and legends about her, and to debunk some of the more resilient myths. It's the sensible person at the party who doesn't get drunk and makes it home in one piece with their virtue intact!
For those interested in the research books I used while writing The Summer Queen, I thought I'd list a handful of the other works consulted, warts and all.   I leave you to make up your own minds, as I  made up mine - and then brought my choices to bear in faceting Eleanor's story.

These aren't all by a long chalk, but they are the ones most pertinent to Eleanor herself (or perhaps not!).

fascinating! thanks for all the background info, looking forward to your book!

fascinating! thanks for all the background info, looking forward to your book!

Thanks for the sources! Will have to check them out. I think I have the Alison Weir one somewhere. I enjoy her writing, but it has been a while since I looked at that one. Your book must be doing well to have come out in paperback as well as hardcover.

Really interesting article
Elizabeth,
Fascinating I really enjoyed reading all of the varied information
(I have the first two books on my wish list)

Argh! I meant to edit, not to delete. Oh, well!

I notice that your article includes an excerpt from John of Salisbury's "Historia Pontificalis" that makes reference to a "Terricus Gualeranicus" (the edition in the Monumenta Germaniae Historica calls him "Ericus scilicet Gualerancius"), apparently a Theoderic/Eric (son?) of Waleran. (I wonder if "miles" here actually means "knight" or merely "of knightly class," since a knight who is also a eunuch AND a secretary (though the medieval term might just mean "privy councillor") is difficult to form a mental picture of.) Since John lays so much stress on the hatred between the queen and the secretary, do you think it possible that the dissembled injury in the quote was not between Eleanor and Louis, but between Eleanor and Eric?