Ghosts on the Walls by Imogen Robertson 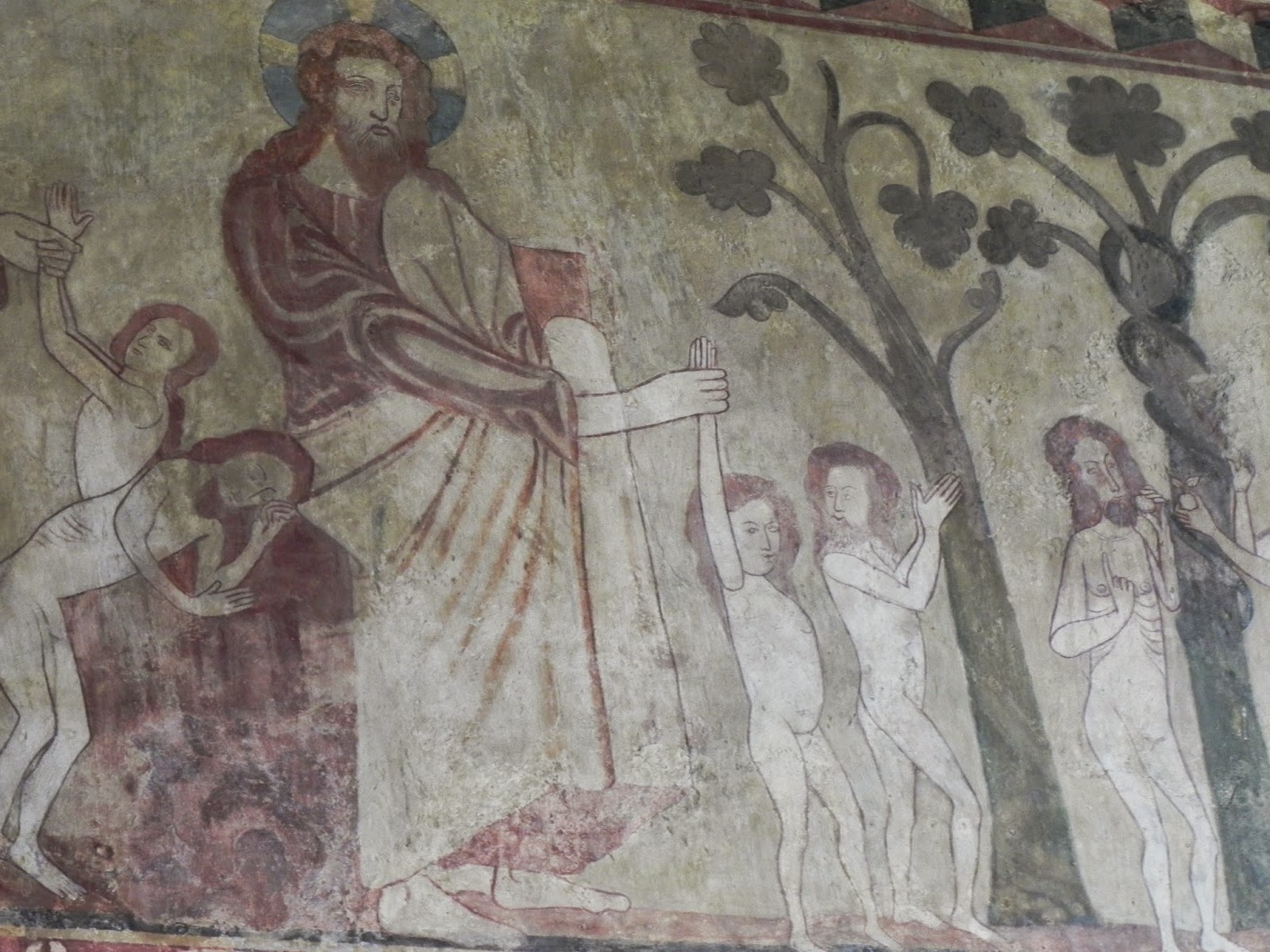 I have a thing about medieval wall paintings. That probably wont come as a great surprise to you. I also have a thing about the medieval marginalia as regularly tweeted by Medieval Manuscripts and Bibliophilia, but the wall paintings in churches have a special place in my heart. I think it's because they exist in the place they were created. They are part of the fabric of a community, a place and its people. This was art for the many not the few, and it’s impossible to look at them without thinking of the thousands of others who have looked at them before.

I was in Rochester a few days ago - nothing to do with the upcoming by-election, though I did dodge Nigel Farage on the pavement and heard a man saying indignantly to his friends, ‘it was the Huguenots that made Kent anyway!’ I was there for the castle, the cathedral and the bookshops. They are all excellent, by the way. I added to my collection of 'Highways and Byways' in Baggins Book Bazaar  and picked up a fantastic little book on hop pickers a bit further along the High Street, and the castle is still pretty intimidating, but my highlight was a partial 13th century wall painting of the wheel of fortune, featuring Fortuna herself and some scrambling  citizens. The best image I can find of it is here. https://www.flickr.com/photos/lysander2/3938405986/in/photostream/

The painting survived because for centuries it was hidden from the reformation by a pulpit and when that was removed, it was discovered looking almost as fresh as the day it was painted.

I know where my wall painting thing comes from. When I got married a couple of years ago, Ned and I made quite a meal of the occasion and had three weddings. We had a legal ceremony in Peckham, our real wedding in a Sussex barn, and then another party the following week in Darlington, my home town.

We spent part of our between weddings week in Richmond, North Yorkshire (in a slightly dazed state and a damp cottage), and while we were there wandered down to Easby Abbey and the adjoining church of St Agatha where we saw this: 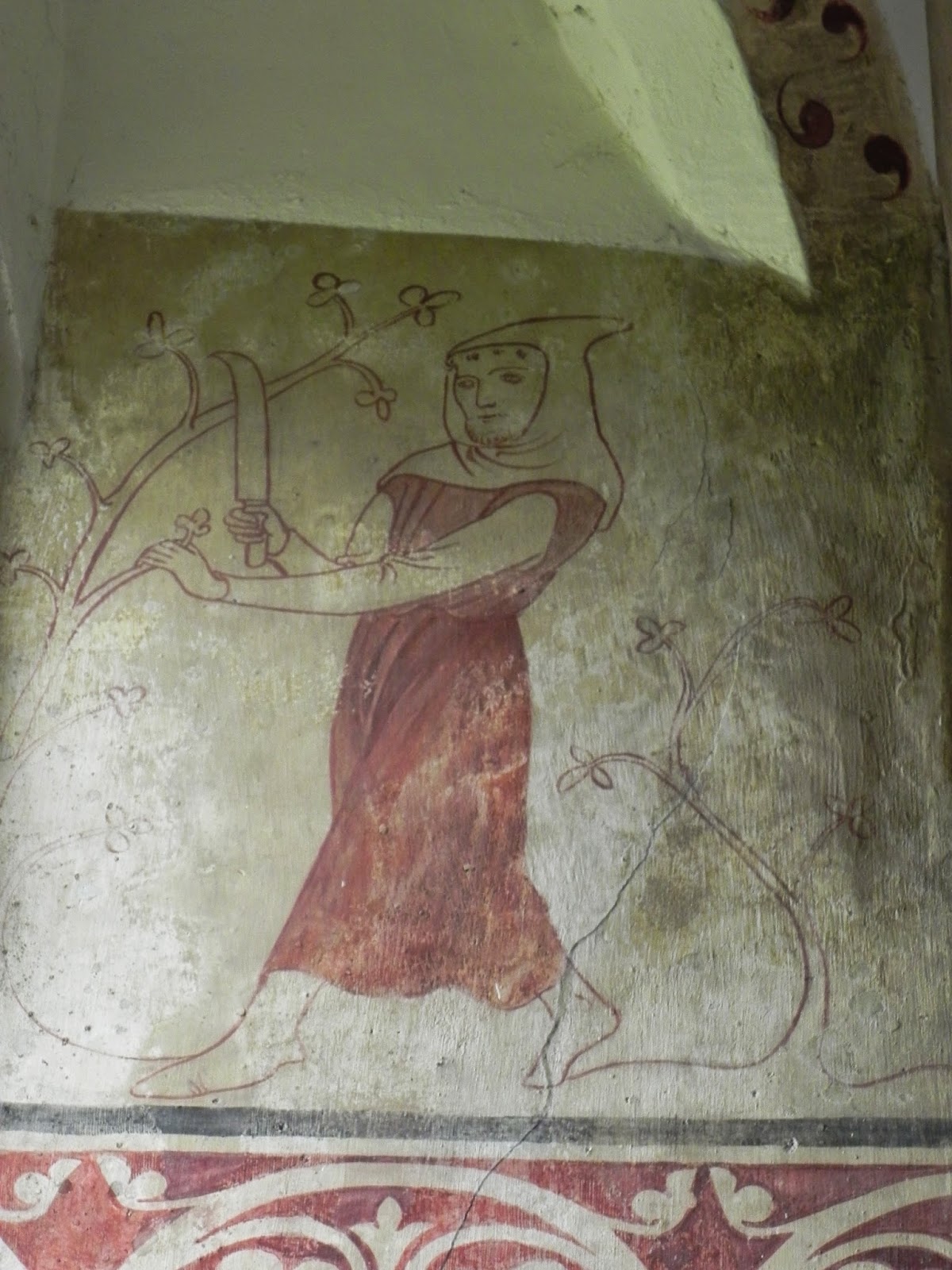 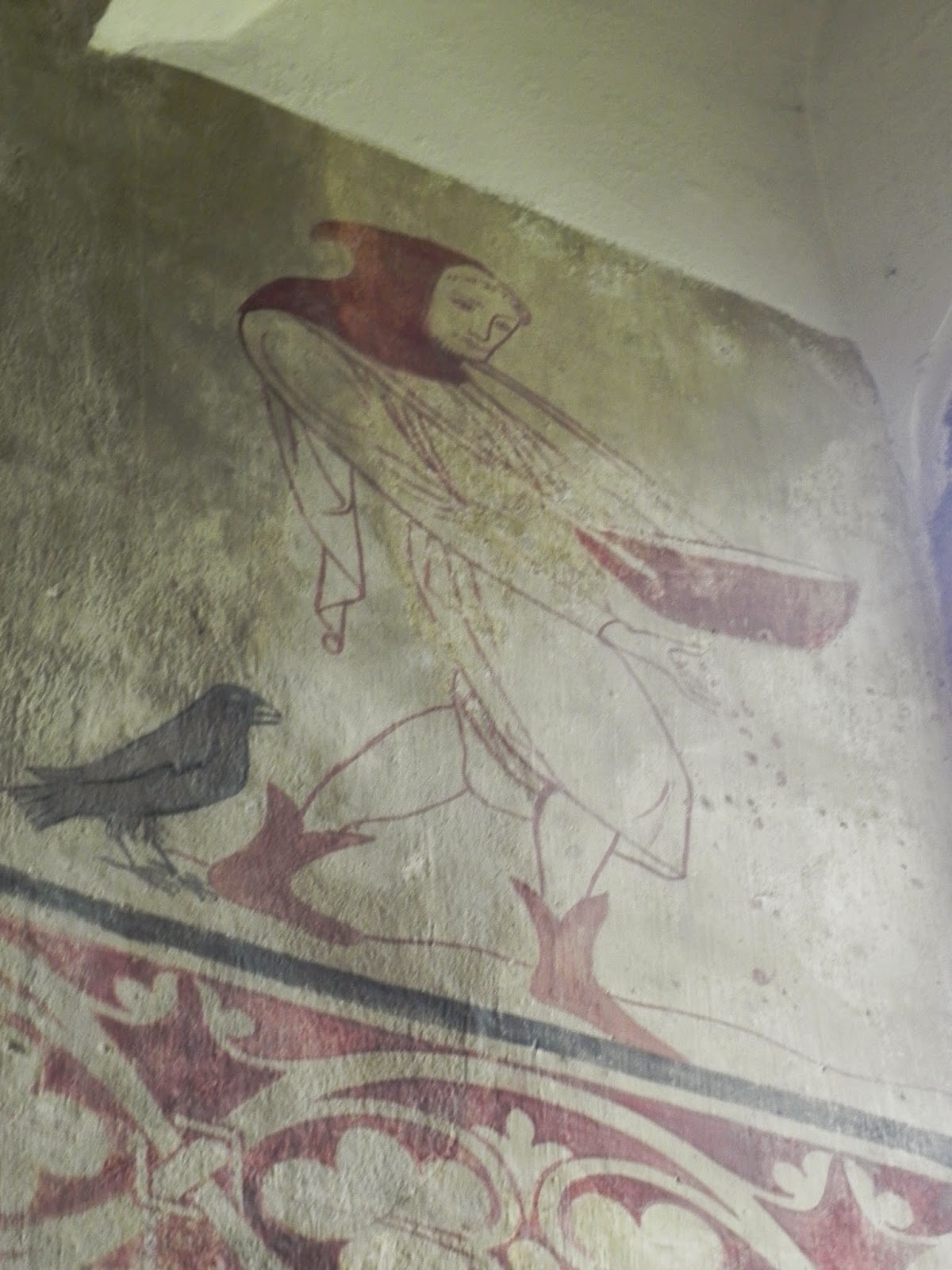 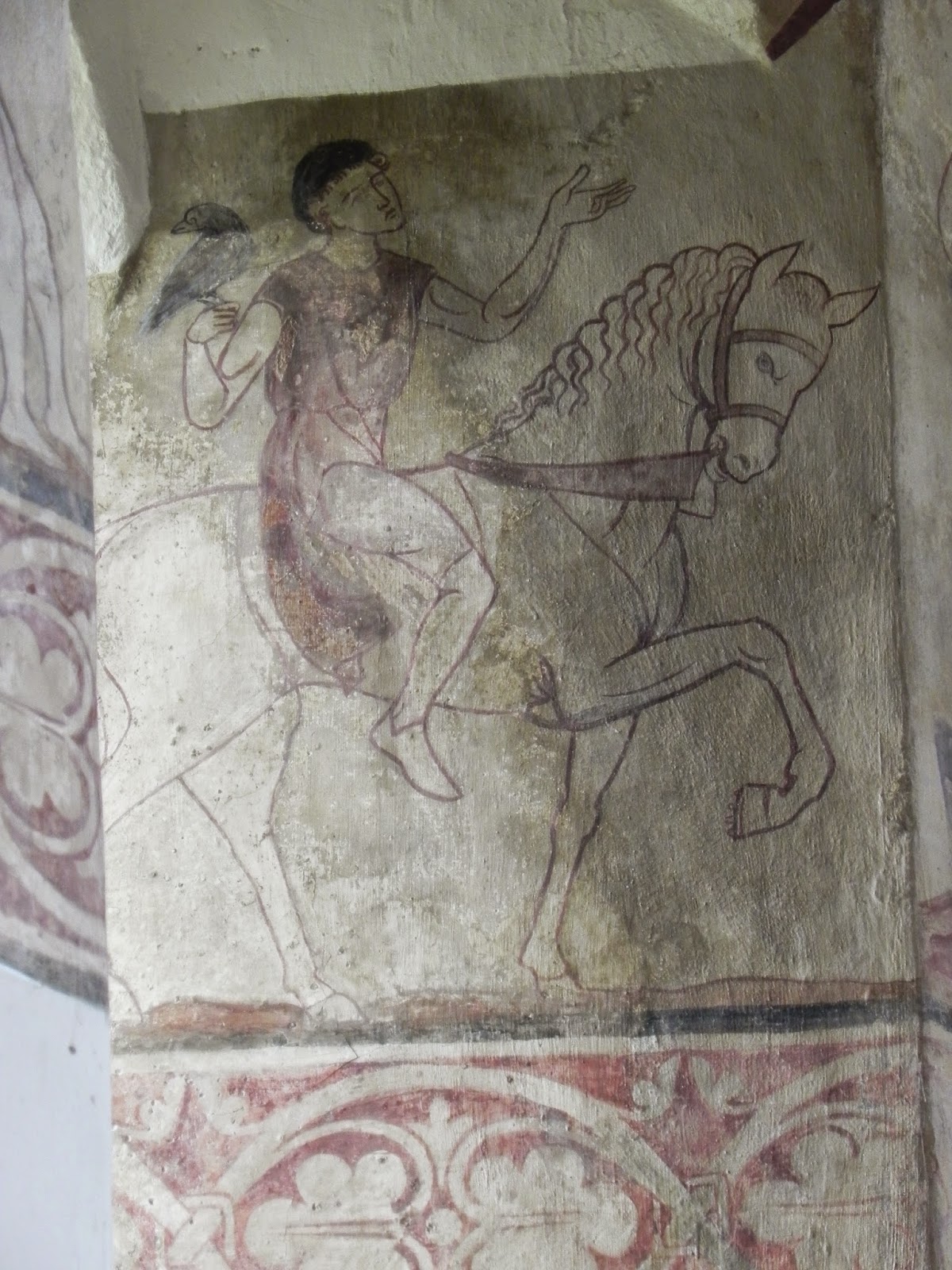 I went to Easby Abbey many times as a child, but perhaps because we always had the family dog with us, we never went into the parish church, so the paintings were a new discovery. It is a small church, and not very distinguished looking from the outside but it was built before the magnificent Easby Abbey, which now lies in ruins around it. The paintings are mid 13th century and are wonderfully preserved (whitewashed during reformation, rediscovered during Victorian restoration). They are extensive, but I like in particular these surviving Labours of the Month designs in the window splays. Were they portraits of individuals? I hope so. Anyway, as I stood in the chancel with my new husband they cast a particular spell.

I haven’t become religious, but I find I’ve been visiting churches a lot more since then. I find them fascinating. Each one is a palimpsest; unique, made over generations as a reflection of the community around it and of those that have visited that community, scored by the times lived through. Standing there I felt like one ghost among thousands - the ghosts of those who had been there to worship, celebrate, mourn or just look, and those that were still to come. Our feet polishing the stones, our hands resting on the woodwork, we were like water moving over a riverbed. We were part of the movement of time passing through this still point.

Many medieval wall paintings have survived reformation and restoration in churches and cathedrals all over the country. The best guide to the subject I’ve found is Roger Rosewell’s Medieval Wall Paintings. Looking at the book now, I find that illustrations of Rochester and Easby are on facing pages, which I find strangely pleasing.

I highly recommend the book and I’ll end with a quote from it: ‘In a physical sense they [the wall paintings] belonged to every parish. They were part of its inherited tradition, its history, the kinship of men and women who worshipped beside them, before them and beneath them… They were a peoples’ art for a peoples’ faith.’

Haha!! Alex and I have been meaning to visit Rochester Castle and the Cathedral for about a year now... you beat us to it, but we're glad to hear it is recommended. And as for Easby Abbey - we remember the exact same feeling in that church looking at those wall paintings; the presence of ghosts all around and an almost palpable sense of us passing through time. Beautifully described, Imo. And an immpression very much shared. We'll let you know how we find Rochester's castle and environs if we ever get there!
James and Alex

That sounds wonderful! Thank-you so much for sharing. I've just clicked through to look at the photo on flickr. Such a small space of the wall - just imagine what our impression of old churches would be if they had all retained their old wall paintings. It's similar to the greek and roman statues - we think of them as elegant and plain, when they probably would have been brightly painted. (When I was very young, I thought that they had actually been purposefully made with missing legs, and arms and heads and so on...not that I thought ancient greeks and romans went around headless, but as some sort of artistic decision not to include them!)

Loved these wall paintings. Whenever I see medieval wall paintings, the costume nerd inside me comes to the forefront and I'm always checking the fashions of the time! Agree about the Rosewall book; I have it on my bookshelf.

Wonderful post! I too love these wall paintings. You can understand how they brought to vivid life the stories which the unlettered could not read for themselves, and they speak as vividly today. I believe Shakespeare's father, as one of the town councillors, was required to whitewash over religious wall paintings. I think they may have been in a guildhall rather than a church.

Thanks folks! James - Rochester is great, couldn't find a really good pub though so let us know if you do. Becca, I know, apparently all the figures on the front of Wells Cathedral were painted once. Wish someone would photoshop that one up. I love checking for the details too, Liz and Ann whenever I see a whitewashed wall in a church, I wonder what's underneath them. My favourite story of what's under there? is this one: http://en.wikipedia.org/wiki/Wenhaston The boards were left out in the rain which cleaned off the whitewash and revealed the Doom underneath.

For really ghostly paintings try St Mary's Wissington. It's in the middle of a field and - speaking for myself - the sense of astonishment evoked by the paintings is completely overwhelming http://www.suffolkchurches.co.uk/wissington.htm

Just had a lovely time reading up on Wissington, Jules. Thank you for the tip! That suffolk churches site is wonderful.

I enjoyed the various paths through this article, and in particular liked your evocation of the process of creating a palimpsest which you were in the middle of doing.