POWDER - AND A PICTURESQUE PASSION by Penny Dolan 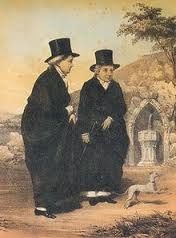 A couple of weeks ago, away in Llangollen, I came across an interesting answer to one of those questions that sits in the back of your mind:

“How exactly did they do that, then?”

I was at Plas Newydd, the home of the famous Ladies of Langollen: Miss Sarah Ponsonby and Lady Eleanor Butler.

The Ladies were a pair of aristocratic women who rejected the expectations of high society in Regency Dublin.  Rejecting the trials of society marriage, or the low status of spinsterhood, the friends eloped together.  Twice.

The second time, they were successful, although they had to rely on friends as well as family to live. 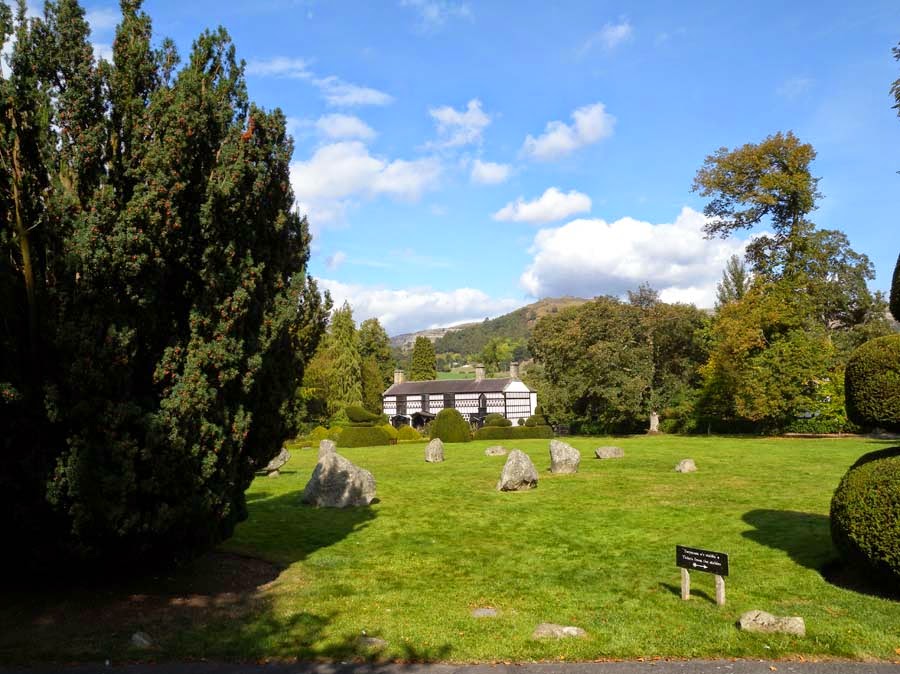 Inspired by romantic ideals, the Ladies left Ireland, crossed to Anglesey and travelled on rough, unmade roads through Wales.

In 1780, the Ladies settled, “retiring” to a cottage in the beautiful Dee valley

Close by were the picturesque ruins of Valle Crucis Abbey and the hill fort settlement and broken walls of Castell Dinas Bran were visible from the site.

With Mary Carrell as their formidable housekeeper, the Ladies lived a quiet and cultured life. They decorated their home in the Gothic style, with strange wood carvings broken from old furniture, fragments of old stained glass and the many curiosities brought to them by their many visitors. Later, under General Yorke, the wood carvings were increased and darkened and the place took on its distinctive black and white look.

Plas Newyydd had brought "retirement from society" but not seclusion and the Ladies, with their scandalous and romantic tale, became celebrities. Over the years, visitors included Southey, Shelley, Byron, Caroline Lamb and Wordsworth as well as the Duke of Wellington and many more. The Ladies were involved in local culture and music and the Welsh harpist Jonathan Hughes often played in their drawing room.

Back now to the start. The eighteenth century was still an era of wigs, pomades, hairpieces and hair-powder. This French fashion had been popularised by Charles II back in the seventeenth century, when “big hair” was linked to the display of health and wealth, to the comfort of hair easily de-loused and to concealing the ravages of hair loss and diseases. Men were the main wig-wearers, but women included a variety of hair pieces as part of “natural” hair-styles. 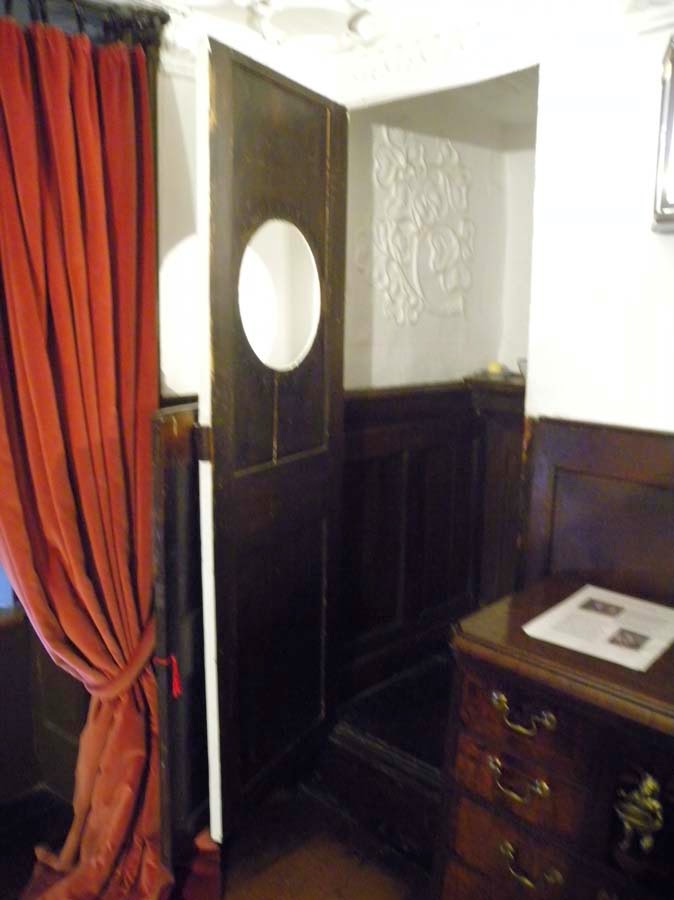 Hair-powders, coloured or white, helped with these fashions. The powders absorbed natural oils at a time when hair was not frequently washed as well as the grease of pomades, the styling gels of the period.

Such powder, made of some form of starch, was applied with bellows and brushes by a maid or servant, and was useful for blending both false and natural hair together.

The gentle-person's garments needed to be protected by arrangements of capes or coverings. Plas Newyydd offers what may be a more ingenious everyday idea. The Guest Bedroom still has a true “powder room”. It is a small walk-in cupboard off the bedroom, a place where one could attend to one’s personal toilette. 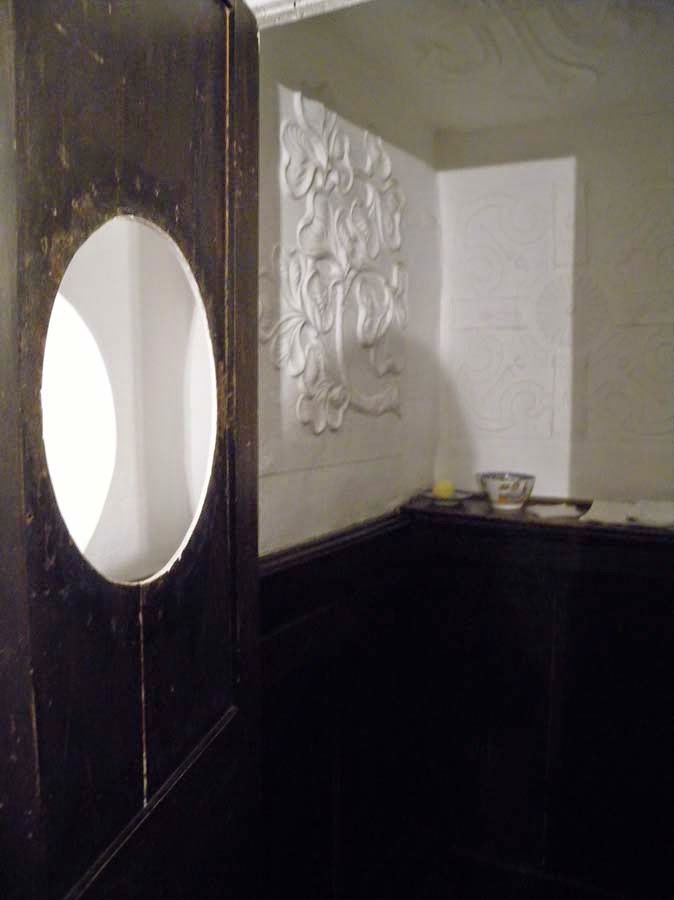 The wooden door has a large round hole cut into it. Although this could just be for daylight, the current National Trust Visitors Notes suggest that the servant stood inside, with the bowl of powder at the ready.

The gentleman or lady, remaining in the bedroom, stuck their head of hairs, various, through the hole and were duly be-powdered, thus protecting their garments - and the room - from an untidy scattering of dust. I do not know if this “invention” was common at the time -  or even if this is just historic supposition – but what a simple and practical device it appears. And what a fascinating scene that would be to write!

The picture of the elderly Ladies above shows them in rural hunting dress. Other portraits show the pair with fairly short hair, cut in the style of their youth, but probably still lightly powdered.

"Powder” however, was already disappearing. With revolution in France and riots and unrest in Britain, society people were less eager to display grand hairstyles. William Pitt’s 1795 Duty on Hair Powder Act, raised to fund the war against the French, finally killed off such powder rooms, except for the coy use of the term in occasional modern hotels. 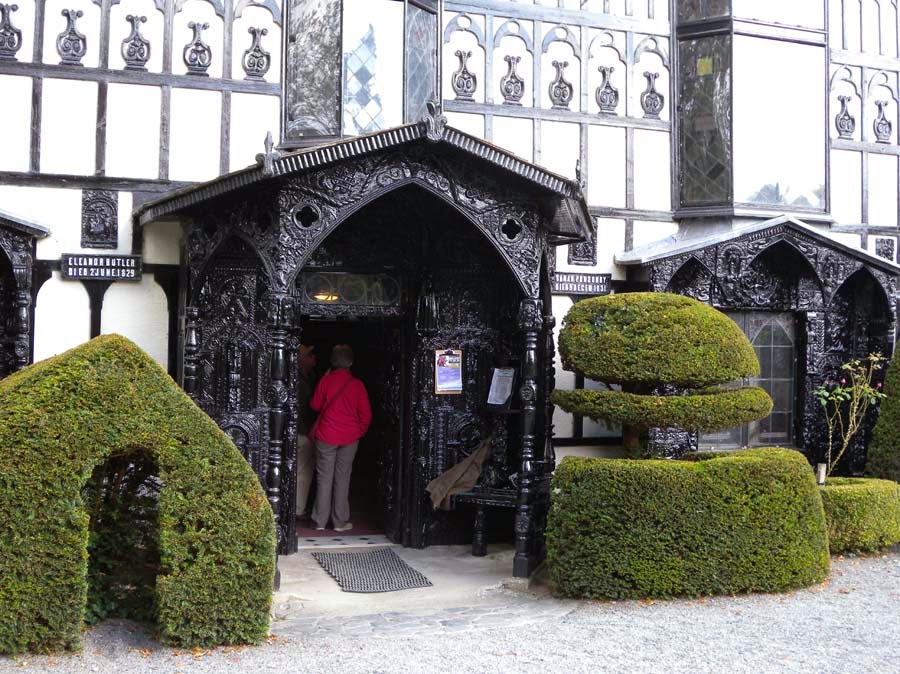 Have never been to Plas Newydd - love the tale of the Ladies of Llangollen! And didn't know about powder rooms before, either; thanks, Penny!

This is new information for me. All courage to the girls for running off and eloping. Lovely stuff, thank you, Penny. I didn't know about such powder rooms before either.

What an amazing story! And I didn't know about powder rooms either. Of course I knew the term was used as a euphemism for a toilet or lavatory (also both euphemisms - what should it really be?) but in my youth 'powder room' implied that ladies popped in there to powder their noses. For some reason, powdering your nose used to be a vital activity that you had to perform several times a day to avoid shine! Women always carried a powder compact. It seemed such a normal thing to do in the 1950s and 60s and now seems very strange indeed.

i loved this post! Like Ann, I'd always assumed 'Powder Room' was a later coinage, and referred to the use of powder compacts (such elegant objects). In researching my novel Variable Stars, which is set in the 1780s, I did come across the fad for hair-powder, which could vary in colour, from white to pink and yellow (Fanny Burney's Cecelia mentions this craze for coloured powders)... Thanks for adding to my knowledge of this fascinating time - and of these two pioneering ladies.