Beyond 'Zulu' - the quest for Isandhlwana by Christina Koning 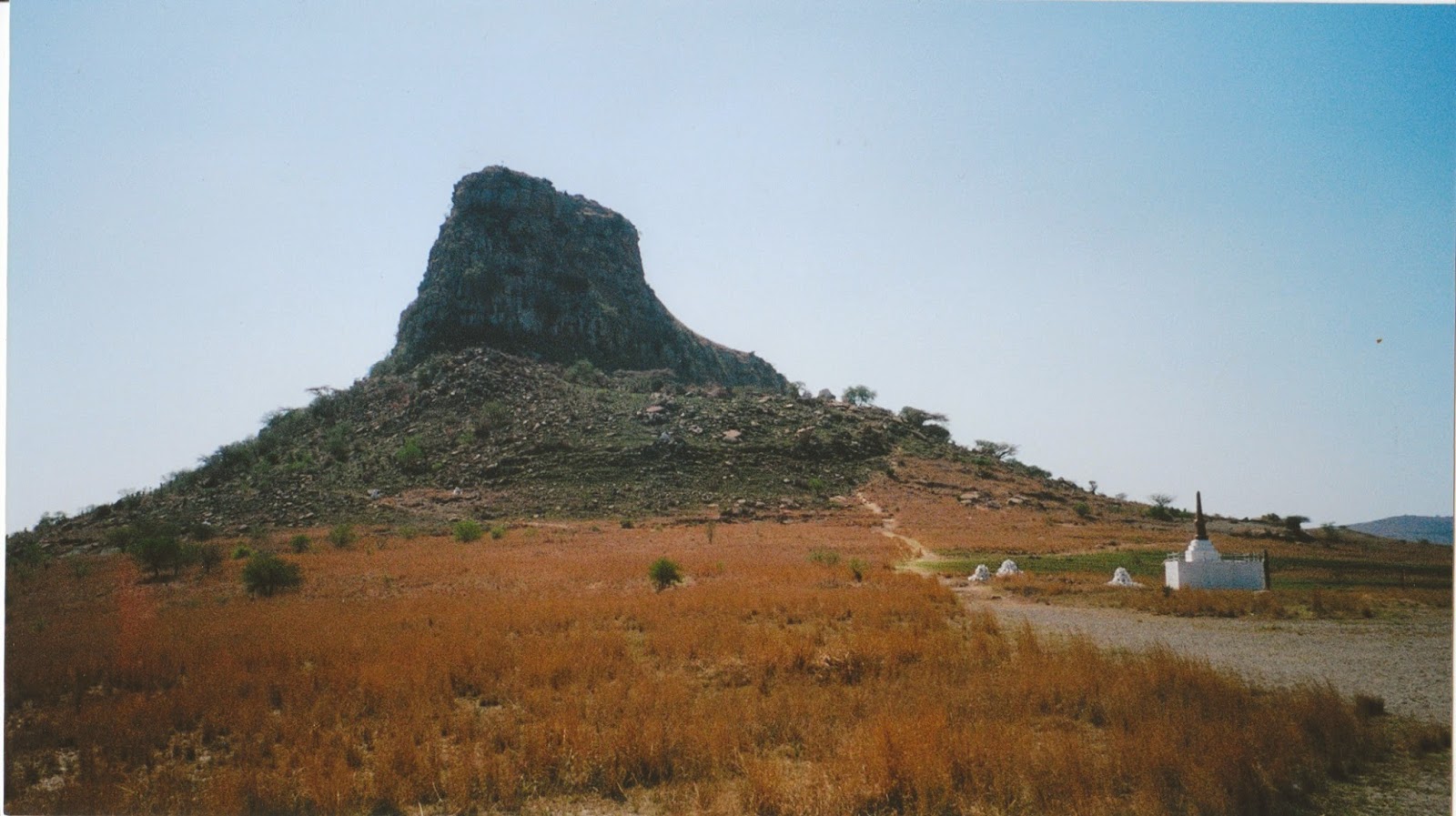 How do novels start? I have to confess I’m fascinated by the whole process. From the germination of an idea to the end result - a published book - often seems to depend on a quite random sequence of events. Chance plays as much of a part in determining the final outcome, as deliberate choice - or perhaps it’s a mixture of the two. I’m always interested to hear about the way other writers approach the task of rendering historical fact into fiction - or indeed into memoir or biography. Does an idea for a book come to you ‘out of the blue’ - or is it arrived at after months of painstaking research?

In the case of my own 2010 novel, The Dark Tower, it was very much a ‘Eureka’ moment - although the months of research, much of it in the British Library, followed soon after. I had been looking through some old family papers, and turned up a diary, written by a great-great-aunt, which described her horrified reaction to the news of a terrible defeat by the British Army at the hands of the Zulu army, at Isandhlwana, in what is now KwaZulu- Natal, on 22nd January 1879. This discovery was the starting-point for the novel. Because I realised that I knew almost nothing about the conflict during which this military catastrophe occurred. I’d heard of the Battle of Rorke’s Drift, of course - anyone who’s seen the 1960s film Zulu, starring Michael Caine, will have some idea what that was about. But of course that was a victory for the British - one might almost say a necessary victory, given that it occurred only a day after the disaster at Isandhlwana. I decided that the only way to find out more about this largely forgotten event was to go to where it happened.

Isandhlwana is a disturbing place. Even if one knows nothing of the grim events enacted there, it still leaves a powerful impression – with its barren outcrops of low hills, surrounding a grassy plain, seamed with dry river-beds, and with the squat, tower-like shape of the mountain, from which it takes its name, looming overhead. It is the landscape evoked, with eerie prescience, by Robert Browning, in his 1855 poem, ‘Childe Roland to the Dark Tower Came’, which supplied me with the title, for the book, and its epigraph:

‘Burningly it came on me all at once,
This was the place! Those two hills on the right,
Crouched like two bulls locked horn in horn in fight;
While to the left, a tall scalped mountain…’

Here, at around mid-day on January 22nd 1879, over two thousand men lost their lives, in one of the bloodiest battles, fought on foreign soil, the British army had ever faced. What made the defeat even more of a blow to the esteem of the British imperial forces was that it was inflicted by an enemy most would have regarded as ‘savages’; an enemy which – though numerically superior - was woefully under-powered in terms of weaponry. In fact, as anyone interested in the history of the Anglo-Zulu wars will know, the Zulus were far from being the undisciplined rabble of popular supposition, but were a formidable fighting-force. Nor – despite the myths that have since grown up about the conflict – were the British soldiers as inexperienced, or their leaders as incompetent, as has been suggested. Bad luck certainly played a part in the tragedy, as did poor judgement by at least one of the commanding officers – but in the main, the British army fought heroically against overwhelming odds, and died, as so many have in conflicts before and since, defending ‘a little piece of ground’ not worth the fighting for.

After such a crushing disaster, morale – both of troops in the line of battle and of those back home – had to be restored, without delay. On the day after the battle of Isandhlwana, came the ‘famous victory’ of Rorke’s Drift. It is perhaps hardly surprising that this incident – in which 139 British soldiers successfully defended the mission station at Rorke’s Drift from an attack by 4,000 Zulus – is far more widely remembered, by the British at least, than what happened on the previous day. The fact that eleven Victoria Crosses – the most ever awarded for a single military action – were awarded to the defenders of Rorke’s Drift, whilst only three out of a far greater number of the no less heroic combatants at Isandhlwana received the same honour, is surely no accident. 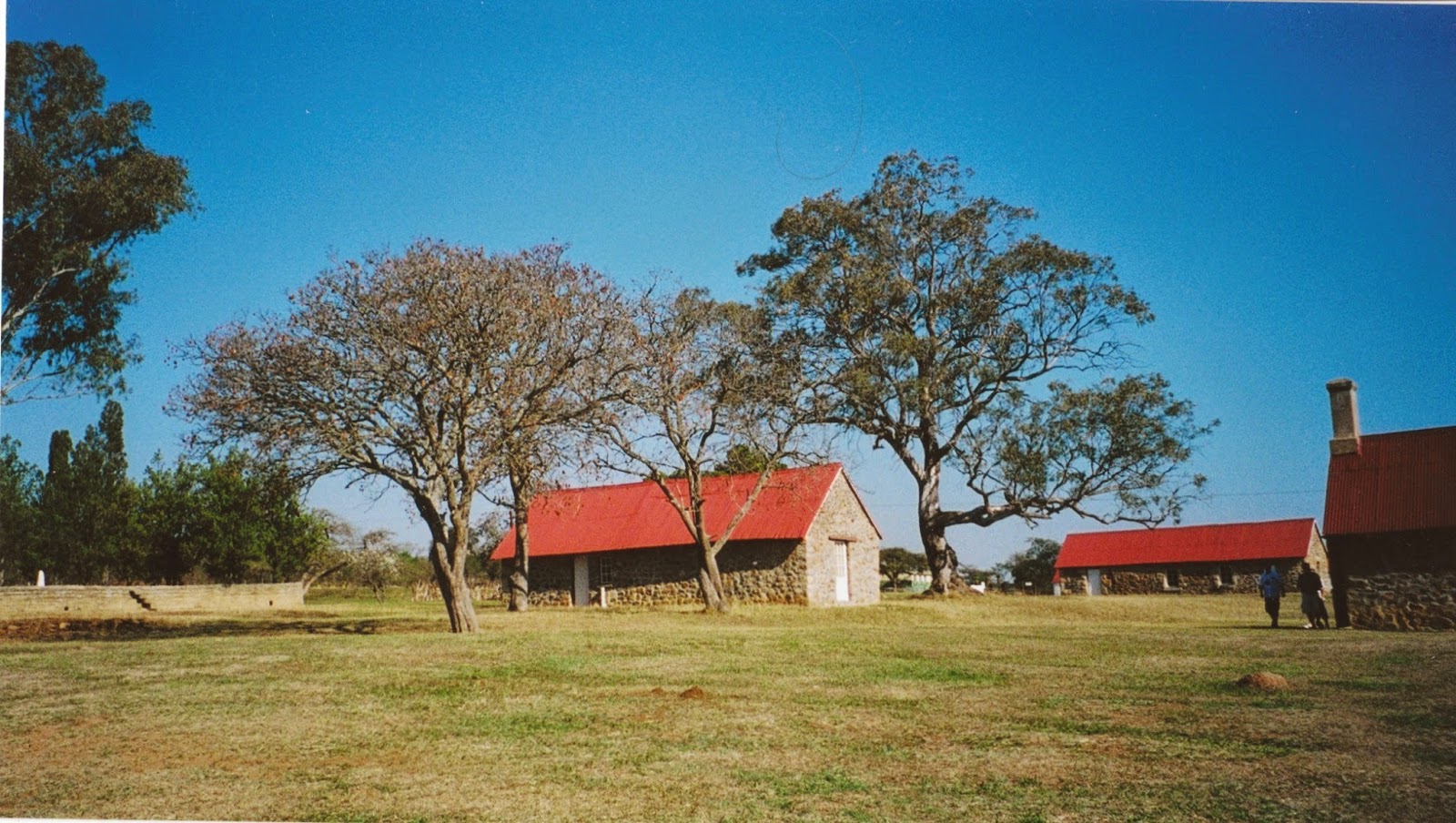 Now, if one visits the place, it is hard not to be moved by the thought of what happened here – reminders of which are everywhere to be seen, in the cairns of white stones which mark the mass-graves of soldiers, who, like Drummer Hodge in Thomas Hardy’s poem of that name about another South African conflict – the Boer War – which was to leave deep scars on the British psyche, have become part of that foreign land they once set out to conquer.

‘They throw in Drummer Hodge, to rest
Uncoffined — just as found:
His landmark is a kopje-crest
That breaks the veldt around…’

In the little museum at Isandhlwana are memorabilia – cap- badges, belt-buckles, letters, drawings, diaries – retrieved from the field of battle and preserved, as a poignant reminder that wars are fought by human beings, not machines. If the recent upsurge of interest in the lives of the ordinary soldiers on the hundredth anniversary of the start of the First World War has demonstrated anything, it is that we are no longer prepared to consign those who fought and died in such conflicts to the anonymity which was the fate of the ‘common soldier’ for centuries.
In writing The Dark Tower, I wanted to show the devastating effects of war on individual lives, and to make the point that, even though the nature of modern warfare has changed, and its technology has become vastly more powerful, the physical and psychological damage suffered by those caught up in such conflicts remains largely unchanged. In depicting what, arguably, might be described as the first ‘modern’ war, I have chosen to focus, not only on the combatants, but also on those left behind – that is, the women. 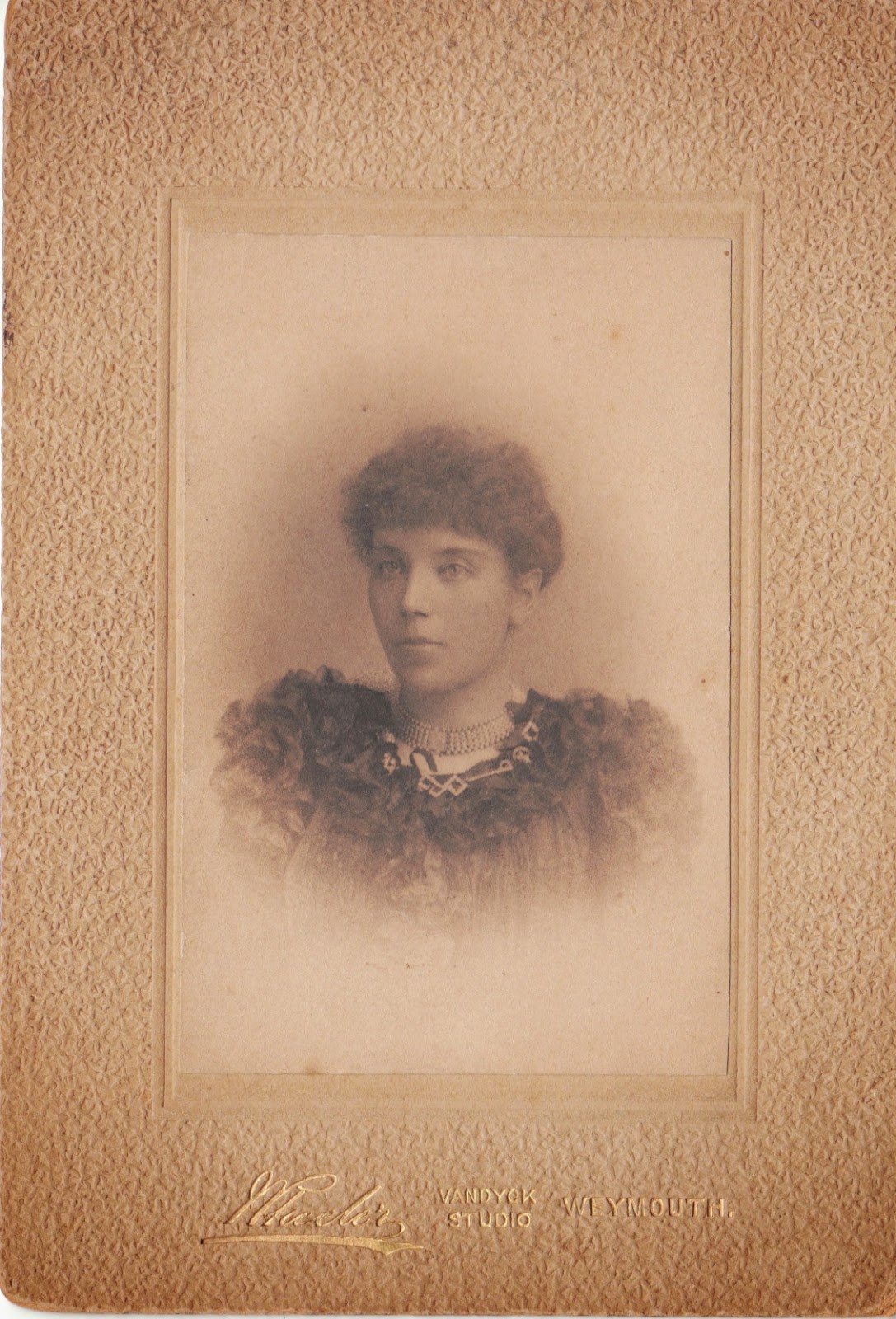 For if my novel had a starting-point, or a single moment of inspiration, it was not my visit to Isandhlwana, nor David Rattray’s wonderful talks on the subject at the Royal Geographical Society, but an entry in a slim, cloth-bound diary:

Great-Aunt Laura then goes on to copy out the account of the battle, sent by the Commander of the British forces in Natal, Lord Chelmsford, to the Secretary for War, and published in the previous day’s Times:

‘I regret to state a very disastrous engagement took place on the 22nd of January between the Zulus and a portion of No. 3 Column left to guard the camp about 10 miles in front of Rorke’s Drift. The Zulus came down in overwhelming numbers and in spite of the gallant resistance made by five companies of the 1st battalion of the 24th Regiment… they overwhelmed them…’

‘This terrible news,” writes the then twenty-four year-old Laura Barrett, ‘has caused a most profound sensation all over the country, & eight regiments are ordered out in ten days…’ A later journal entry strikes a more anguished note:

‘I have been through the cloud, & have known what real trouble is, and in the dark & cloudy day I could not write…’

A section of the diary has been torn out at this point. It was this – and the confessional tone of the above – which led me to speculate about whether Laura herself might have had a more personal connection with the ‘terrible news’ she has related, and, if so, what that connection might have been. The few facts I knew about her – a woman who, though living into her nineties, never married, but was said to have once been engaged to a man (perhaps a soldier) who had died in Africa – provided further food for thought. 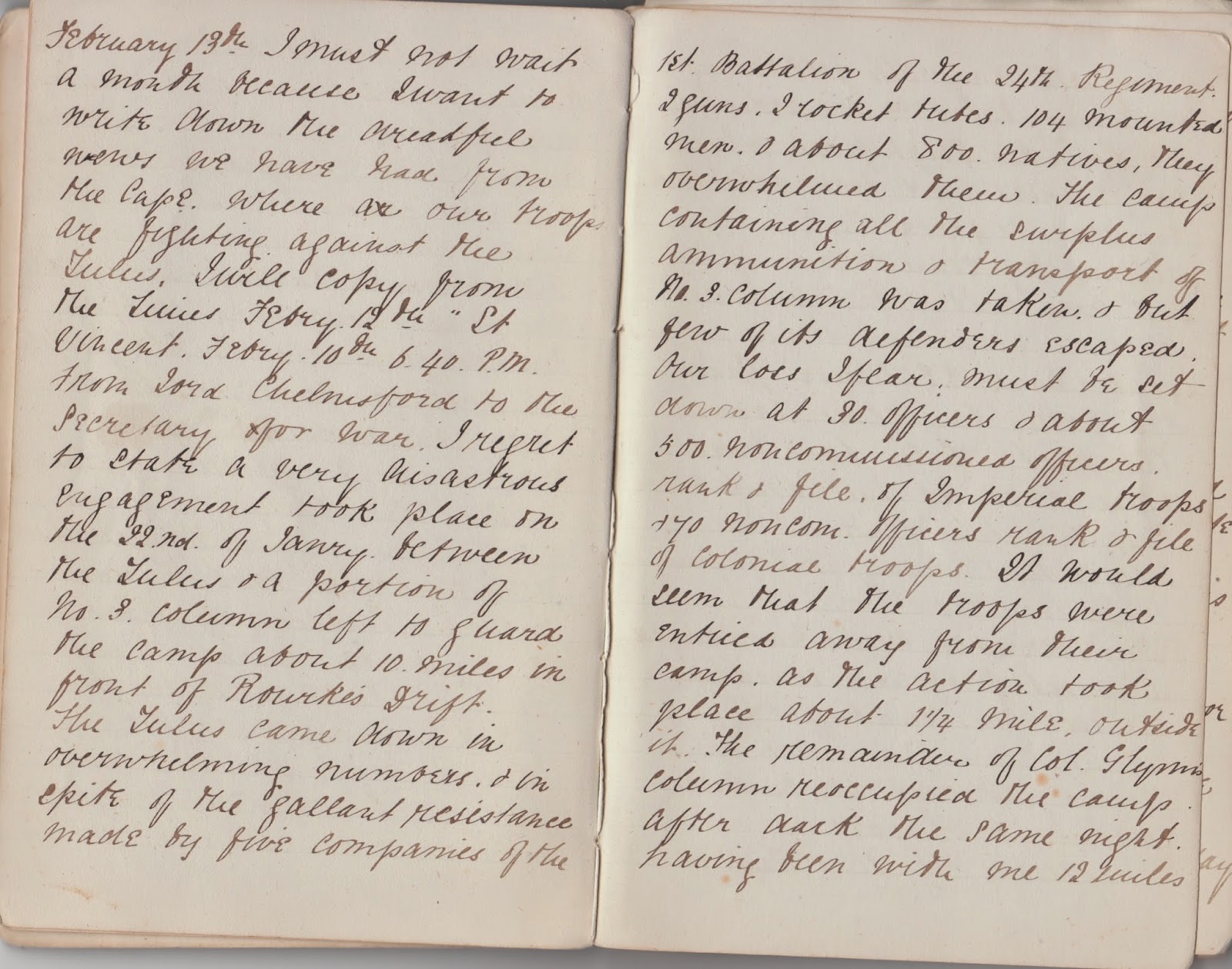 I realised that Laura’s story was also one I wanted to tell. Out of that realisation, came the opening pages of The Dark Tower.
Posted by Unknown at 09:00

Hope you enjoy it, Leslie! Cx