Of Ships and Suns - by Katherine Langrish 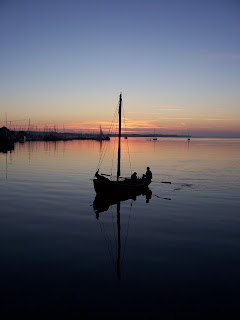 In all kinds of mythologies there are stories about sailing across the sea to a mystical land.  Maybe peoples of all races and all times have this in their blood: anyone who’s ever stood at the seashore and seen the sun rising or setting over the ocean must have wondered, like young Peer Ulfsson in my historical fantasy ‘West of the Moon’, what it would be like to find the lands beyond the sun:

He clambered across the cargo and up the curve of the ship into the stern, where he stood for a moment holding the tiller and gazing out westwards.  The sun was low, laying a bright track over the water: a road studded with glittering cobblestones.  It stung his heart and dazzled his eyes.

He felt a surge of longing.  Life was a tangle that tied him to the shore.  What would it be like to cut free, shake off the land, and go gliding away into the very heart of the sun?

That ships and suns go together can be seen from the Egyptian sun god Re with his two boats: the sun boat or Mandjet (Boat of Millions of Years) which carried him from east to west across the sky accompanied by various other deities and personifications, and the night boat, the Mesesket, on which the god travelled through the perilous underworld from west to east, to rise again in the morning. 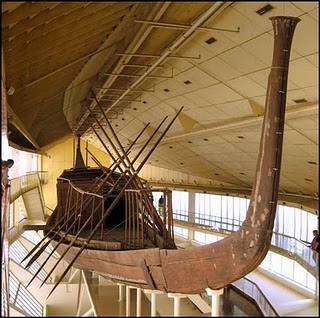 How old is Re?  Well, judging by the dates of temples dedicated to his worship, his cult rose to its zenith in the 5th Dynasty, beginning approximately 2500 BCE.  The dead were expected to spend eternity travelling with him across the sky. (Later his cult was superseded by the resurrection cult of Osiris.)  The photo above this paragraph shows the full-size Egyptian ship known as the Khufu ship, 143 feet long and built of Lebanon cedar, which was sealed into a pit at the foot of the Great Pyramid of Giza: the remains of many other solar boats have been found in different locations in Egypt. 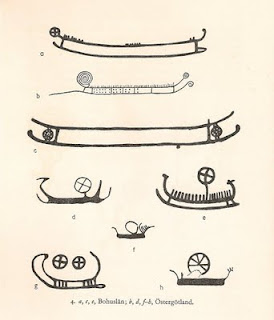 Rock engravings in Scandinavia, dated to the Bronze Age any time between 1500 and 400 BCE show the same correspondence between ships and suns.  Here are some examples, reproduced in ‘The Chariot of the Sun and other Rites and Symbols of the Northern Bronze Age' by Peter Gelling and Hilda Ellis Davidson, showing ships embellished with sun discs and spirals.

But people have been heading out to sea for literally hundreds of thousands of years.  Here’s a link to an article which seems to show that even before we were modern humans, hominids such as homo erectus ‘used rafts or other seagoing vessels to cross from Northern Africa to Europe’ – island-hopping as they went and leaving stone hand axes on Crete dating to at least 130,000 BCE.   How amazing – how utterly mind-blowing is that?  Modern humans crossed to Australia 60,000 years ago, and to North America earlier than 13,000 BCE.

Whatever drove them to make these discoveries?  A nomadic hunter-gathering lifestyle is one thing: but setting off in a boat or on a raft on a one-way trip into an unknown ocean is quite another, especially with no population pressure pushing you on.  I can’t help but wonder if there was maybe a religious, a mystical element to these early voyages of discovery.  Maybe, standing on the sea shore, gazing at the sun rising or setting (depending which side of which continent they were), early peoples believed themselves to be embarking on journeys to follow the sun to the land of gods and the happy dead?

And those left behind, watching them depart, must have felt a huge sense of awe, wonder and mystery about what befell the seafarers. As it says in ‘Beowulf’, when the dead king Scyld Scefing is set adrift in his ship-funeral:

Then they set up / the standard of gold
High over head: / let the sea bear him:
Gave him to the flood / with sad hearts
And mourning minds.  / Men cannot
Say for certain, / neither court-counsellors
Nor heroes under heaven, / who received that cargo.

Who received that cargo?  By the time the Beowulf poem was written down, England was Christian.  But the poem leaves us in doubt as to the eventual supernatural landfall of a pagan king: it was an age which could still hold Christian and pagan beliefs in relatively comfortable simultaneity – an age which, maybe, knew it didn’t have all the answers.

And people down the centuries have been buried in ships, like the Anglo-Saxon Sutton Hoo ship, dating from the early 7th century AD, and the Oseberg ship, circa 800 AD,  which carried the bodies of two women, priestesses or queens, and the Gokstad ship, built of oak felled around 890 AD, sheltering the body of a man, perhaps a king.  The 10th century Muslim traveller Ibn Fadlan wrote an eyewitness account of a Viking ship-funeral in Russia: a chieftain interred in his ship along with many grave goods and sacrifices, including that of a slave girl who ‘saw’ into the land of the dead in a kind of drugged trance, after which she was strangled and stabbed and laid beside him to accompany him on his mystical voyage.  According to Ibn Fadlan’s account, she had voluntarily offered herself as the sacrifice, and we needn’t be too sceptical.  In all probability she utterly believed she would be accompanying her lord to the Otherworld.  He was her passport to immortality.

So ships and suns and voyages into the west have been part of the human imagination for many thousands of years.  After Re the sun god, there came Odysseus, Jason, Maelduine, Brendan, Oisin and many a nameless adventurer with them.  There came the Christian hermits who sailed out to remote islets in the Atlantic, and the saints who founded monasteries on Holy Islands like Iona and Lindisfarne.

So let’s set sail for the western isles, the land of the gods, the land of the dead, the land of the ever-young.  Bid farewell to Middle-Earth.  This way to Aeaea, Avalon, Tir na n’Og, Valinor, Eldamar, the Hesperides and Hy Brasil.  Hush! Can you hear the seagulls crying?
Posted by Katherine Langrish at 05:30

Lovely post. Adventurers closer to nature and sense of wonder.

Katherine, in my journeys round the Mediterranean in search of the history, legends of the olive tree for the books 'The Olive Route' and 'The Olive Tree', and later the five Olive Route films, I covered some of tho territory you have touched upon here. The Minoans in Crete, for example, were great sailors and I believe that we haven't even begun to know the extent of their reach. The Phoenicians, too, I live by the sea in the south of France because residing any distance from the water's horizon and those dreams of possibility make me nervous. The lap of waves are in synch with my heartbeat. I am one of those nameless adventurers you speak of. Thank you for this lovely post.

I loved this Katherine. Bit of a sniffle at the end from me.