An article about the wonderfully gifted actor Sophie Okenedo in The Guardian (4th July 2014) mentioned that in order to find good parts she has to travel to the USA.  She said,  “I think a lot of it is [due to] costume and period drama, which must be, what, at least 40% of what we do here? Which means 40% of opportunities are closed to me already.”

Now this statement bothered me and not just because one of our best and brightest actors can’t find enough work in the UK.  What’s really troubling is the apparent assumption amongst programme makers that costume and period drama is a Whites-Only zone. Peter Fryer’s Staying Power – the definitive history of black people in Britain – really ought to be required reading for anyone who produces period drama in the UK. Africans, Asians and their descendants have shaped British Culture and society from Roman times until the present. So why isn’t that represented on TV?  Are programme makers in the UK simply ignorant?  Or is something more sinister at work here? Have we whitewashed our history the way Hollywood has whitewashed it in the USA?

I grew up on a steady diet of B-movie Westerns in the cinema.  On TV you just couldn’t get away from the things -  Bonanza, The Virginian, Alias Smith and Jones, Rawhide the list goes on and on.  The cowboys were always white, clean shaven, morally upright and remarkably clean for men that lived a roving life on the open prairie. 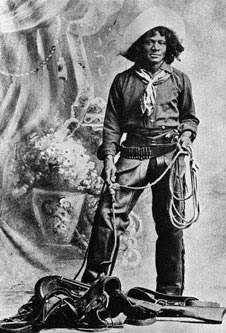 When I started researching Buffalo Soldier I came across some startling statistics.  Around 25% of cowboys and 25% of the US army during the “Wild West’ period were black.

I must have seen John Ford’s 1954 classic The Searchers for the first time when I was around five years old.  I have a very clear memory of watching it with my father.  Starring John Wayne it tells the story of Ethan Edwards, an ex-Confederate soldier who swears revenge after Comanches kill his brother’s family and abduct his niece, Debbie.  The film made a huge impact on me at the time: I remember finding the idea of being captured by the Indians absolutely terrifying.  But what was more terrifying was what happened when – after 5 years of searching - Ethan finally found the now grown-up Debbie.   I was expecting a joyful reunion.  Instead there was a moment when Ethan - so revolted by Debbie living “with a buck” – is going to kill her.  I found it profoundly upsetting back then.  I still do.

The Searchers was based on Alan Le May’s book which was inspired by the real life story of a father who went in search of his family.  It’s only recently that I discovered the original Searcher was black.

Britt Johnson, born a slave, was the property of Moses Johnson, a landholder in West Texas. Britt had the relatively privileged foreman’s position and was allowed to raise his own horses and cattle.  But in October 1864 his son was killed in a raid in a Comanche raid and his wife and two children were captured.  Britt Johnson searched for his family until the summer of 1865.  Some sources say he went to live with the Comanches and managed to arrange their ransom.  Others say they were ransomed and released as part of ongoing peace talks.  No one asked him for his version of events.  No one wrote it down.  Shame.  It would have made fascinating reading.  Either way, Britt Johnson’s family was rescued and after that (with the end of the Civil War bringing freedom) they moved to Parker County.  From then on he worked as a teamster and freighter, hauling goods from place to place. 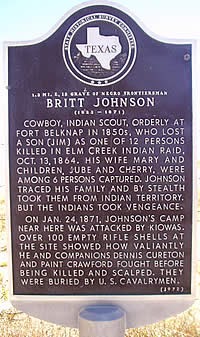 On January 24th, 1871, a group of Kiowas attacked a wagon train manned by Britt Johnson and two other black teamsters.  Heavily outnumbered, after a desperate fight all three were killed.  They were buried in a common grave by the side of the road.

We’ve had 12 Years A Slave.  It’s time for a re-make of The Searchers, I think: one that hasn’t been whitewashed.

Thanks for this very interesting post! I hadn't heard this story before. I'm sure sooner or later someone will do that film. There are some amazing African American actors around these days to fill such a role. Pity British actors have to go there to get work.

There is so much of our history that's been whitewashed - the victors get to tell all th tales as usual. Great post ad fantastic story. The BBC did a radio dramatisation of the searchers last autumn, I think and as a companion piece broagcast a v interesting documentary about Britt - amongst others.
Thanks so much for this Tanya x

My shamefaced apologies, everyone. It's Peter Fryer's Staying Power (not Steve).

Very interesting post Tanya. I knew The Searchers was based on a real event but I hadn't realised the full background. It's vital that this kind of history is told. (You have Britt's son killed in a raid in October 1964 btw, I don't know if you can go back in and change the date?).

And this, people, is why good editors and proof readers are so important.. I am rubbish at both. Sorry!

Great post - thank you, Tanya. I did know that a large number of cowboys were black - a large number were actually British too, with Scots or Geordie accents.

I didn't know that The Searchers was based on a true story, and that 'the searcher' was black. It would make a fantastic film, told from that angle.