Cabinet of Curiosities - the Blue and White Jar - Woman's Work? by Leslie Wilson

I found it in an antique shop; the wonderful Aladdin's cave of Stuart House which I always go to when I visit Chipping Campden in the Cotswolds. My birthday was coming up and I knew immediately what I wanted as a present. When I saw it across a room crowded with porcelain and pottery, I thought it was Chinese, but when I got closer to it, I recognised that it was European. The mark suggests that it is, in fact, Delft, made by Pieter Adriaensz Kocks (it was sold me as a Pieter Kocks jar), which would date it between 1701, when Pieter took over the workshop from his father Adriaen Kocks, who became a director of the De Grieksche A factory in 1687. The factory produced tinware inspired by Kangxi blue and white porcelain.

I love blue and white pottery and porcelain, and also am very fond of the European ceramics that drew on the Chinese styles, like the Onion Design I mentioned in my blog about Germany: Memories of a Nation. I find the fusion between Eastern motifs and Western interpretation particularly pleasing, and so I was thrilled to be able to buy this piece - it wasn't as expensive as you'd suppose, perhaps because it is not perfect; there are little chips out of it here and there and the dog, or tailless cat - I'm not sure which, but a charming animal - who sits on the top of it is damaged. I don't care. 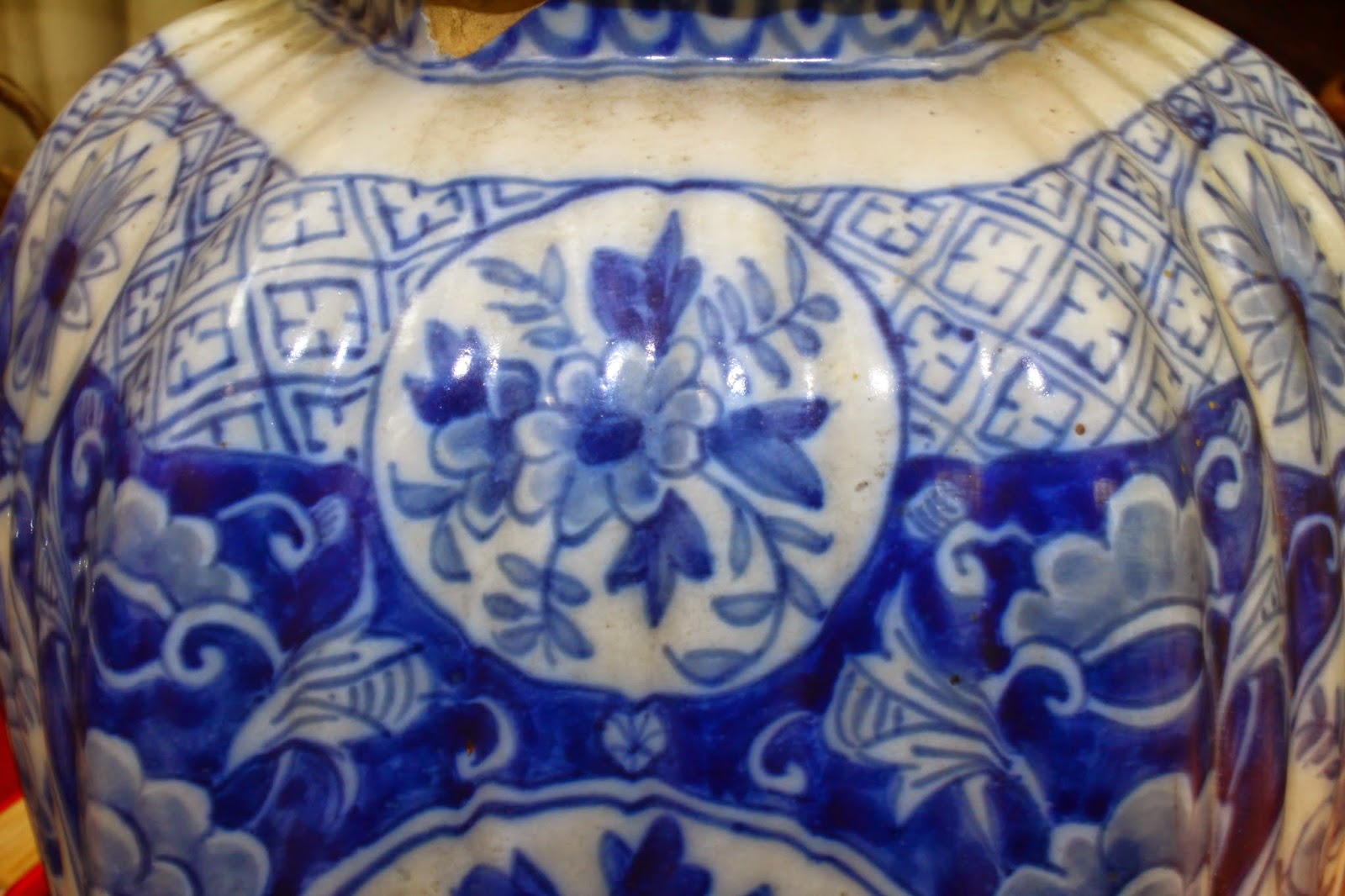 Being Delft, though it looks like porcelain, it is not - the secret of porcelain was still closed to the West when it was made. It is tinware, which means it is made out of pottery, whitened with a glaze based on lead oxide and tin, and that is what gives the porcelain-like milkiness.
At a speculative guess, I would say that it probably was produced towards the beginning of the Pieter Adriaensz period; this is based on the information I have gleaned (and I haven't been able to find out that much, alas) which suggests that later on the factory concentrated on Imari-style ware. My jar looks more like Adriaen's productions - it could, of course, be a fake, but I do hope not. It is certainly very beautiful and skilfully made. However, I do find the de Grieksche factory interesting, because after Pieter's death, only two years after he had taken over the business, 'he' continued to produce Delft ware, because his widow, Johanna van der Heul, kept the workshops going. I tried as hard as I could to find out more about that, but without success so far, so if any reader of this blog can point me in the right direction? I would be very pleased.

However, I turned to Alice Clark's invaluable The Working Life of Seventeenth Century Women, and found that in England at least, shortly before my jar was made, it was quite usual for widows, and sometimes sisters, to take over businesses after their husbands' or brothers' death. Whether they actually did the work is another matter and harder to discover; however, I do seem to remember that intricate decorative work on chinaware has historically been done by women. It does make me feel quite strange to see that a piece of Delftware was 'produced by Pieter Adriaensz' at a period when he was already dead, and demonstrates all too clearly how women's work has become invisible in history. Indeed, it was from only one Internet site that I discovered about Johanna. I salute her, though, across the centuries. I hope my jar was produced under her direction.
Now, when I look at it, I don't see 'Chinese' but eighteenth-century interiors, where it sits on a high mantelpiece in some home probably much better-off than mine, originally. De Grieksche made items for King William and Queen Mary at Hampton Court, and I have read in one source that the more European designs, which the flower-panels on mine seem to be, were produced for the British market. The grooves were made by drawing fingers down a pot made on the wheel; sometimes I put my own fingers in them and imagine I am touching the fingers of that long-ago workman (or woman even?). 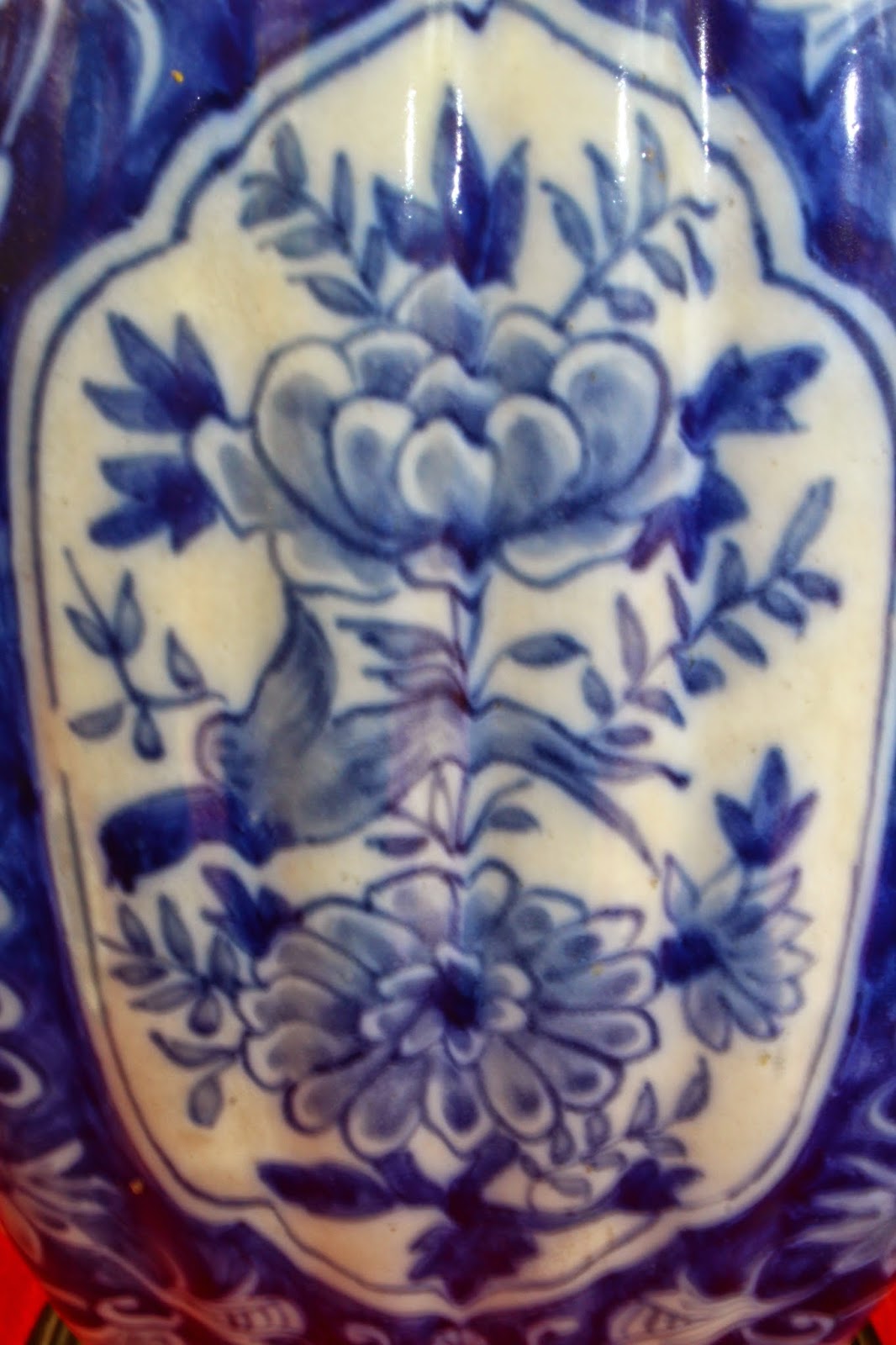 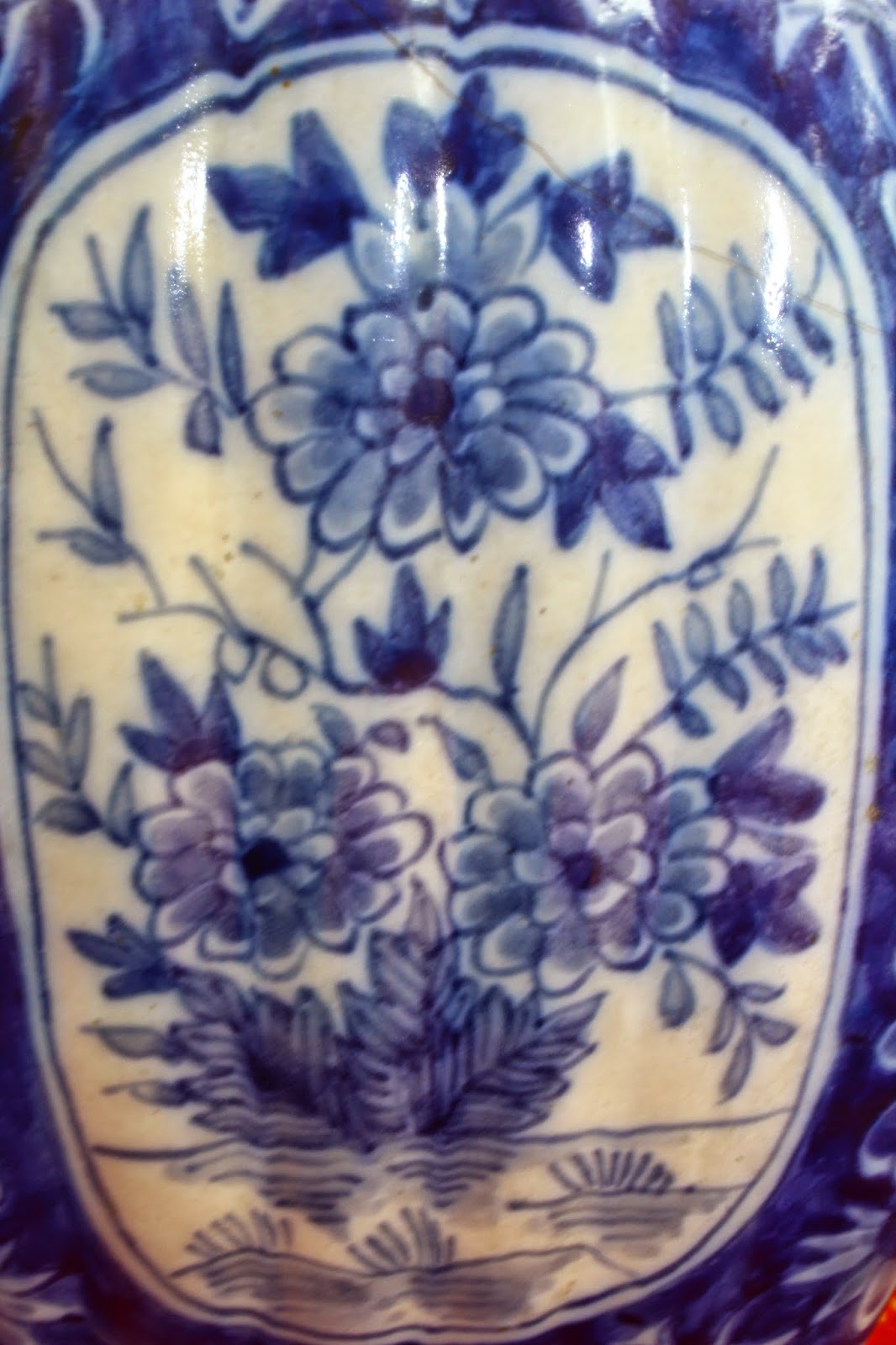 I do wonder who owned it before me - it is a constant fascination to me, since I shall almost certainly never find out - and I love to imagine. It may have been made and brought to England in William of Orange's last year of life, or else in the reign of Queen Anne. It connects me to those times, across three hundred years, and is very beautiful. It sits now opposite my Meissen vase, behind a  studio glass scent bottle my husband bought me in Paris - on receipt of which I stood, as I did when I was given the Delft jar, speechless and breathless with excitement - and beside the blanc-de chine Kuan Yin, dating from the mid-20th century, that I found in an antique shop in Hollywood Road in Hong Kong. They all get on very well together. 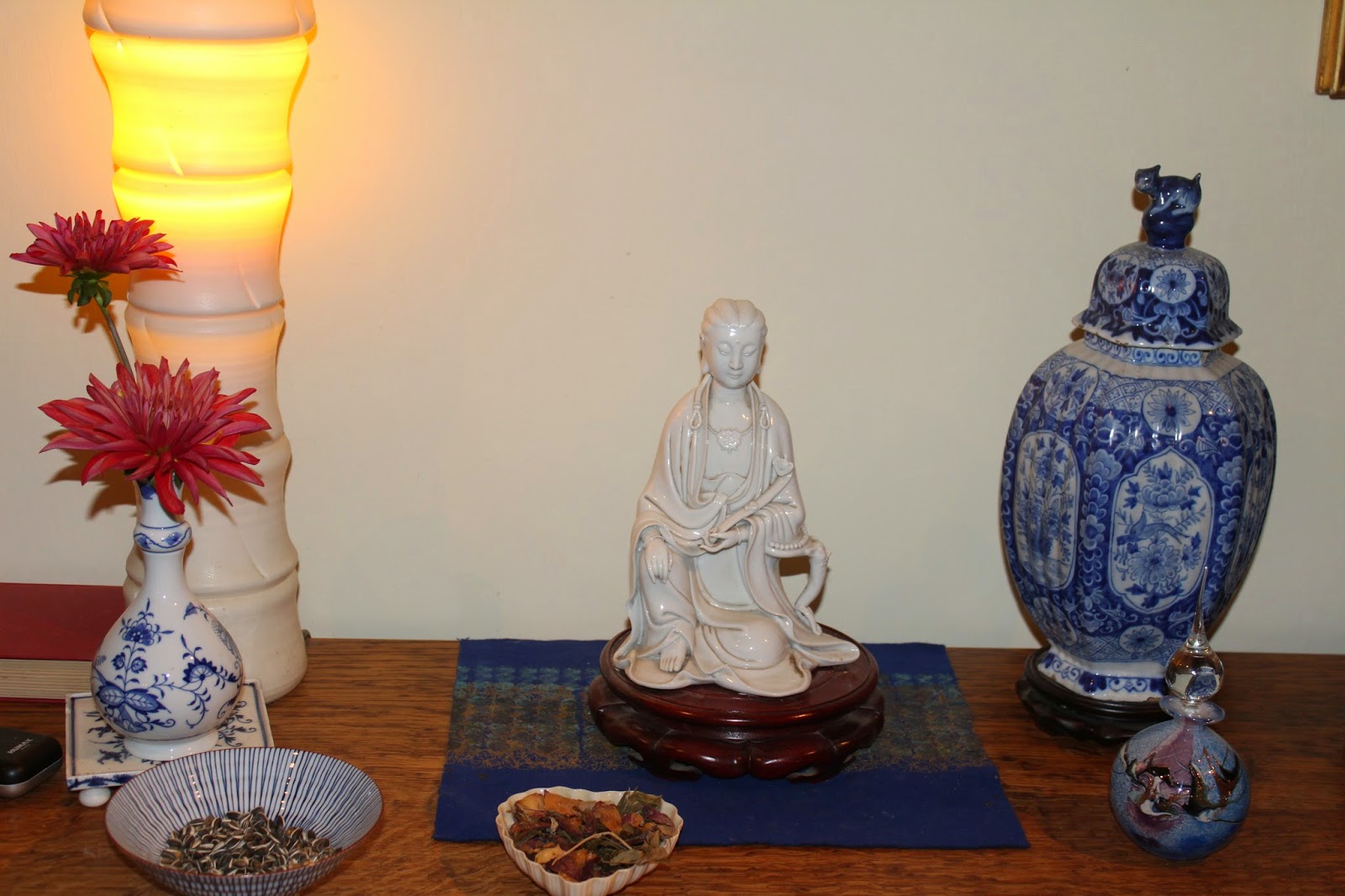 PS: the colour on the last photograph is truer than the other ones, which come out just a little too blue. In fact, the colour exactly matches the blue of an antique Chinese snuff-bottle (Qing Dynasty) that I also possess.
Posted by Leslie Wilson at 00:30

What a fascinating insight into the design and manufacture of these items - thank you, Leslie. And fascinating, too, to wonder who else might have owned it.

I am absolutely blissed out, enraptured and wickedly jealous! What a piece, what a find, one of the best blue and white things I've ever seen (and I've seen a fair few). O for the thrift shops of Chipping Camden! Thank you very much for sharing.

Well, I wouldn't call Stuart House a thrift shop... it's an antique shop specialising in china and glass - but they have a great bargain cellar! Yes, I reckon I was lucky to find it..

Beeb has new series beginning with Cabinets of Curiosities but hey, we were there first!