We thought it was time to update the photo on the About Us Page, because there have been a lot of comings and goings in the History Girls since we began this blog three and a half years ago. We have lost Mary Hooper, Linda Buckley-Archer, Harriet Castor, Barbara Mitchelhill and Theresa Breslin from our original list. Several other names have disappeared since we started: Essie Fox, Lucy Inglis, Emma Darwin, Katherine Roberts, Di Hofmeyr, Nicky Browne, Manda Scott, Julia Golding (Eve Edwards), Katie Grant, Jane Borodale and Louise Berridge. So many great writers and good friends who have succumbed to the pressures of work or family. 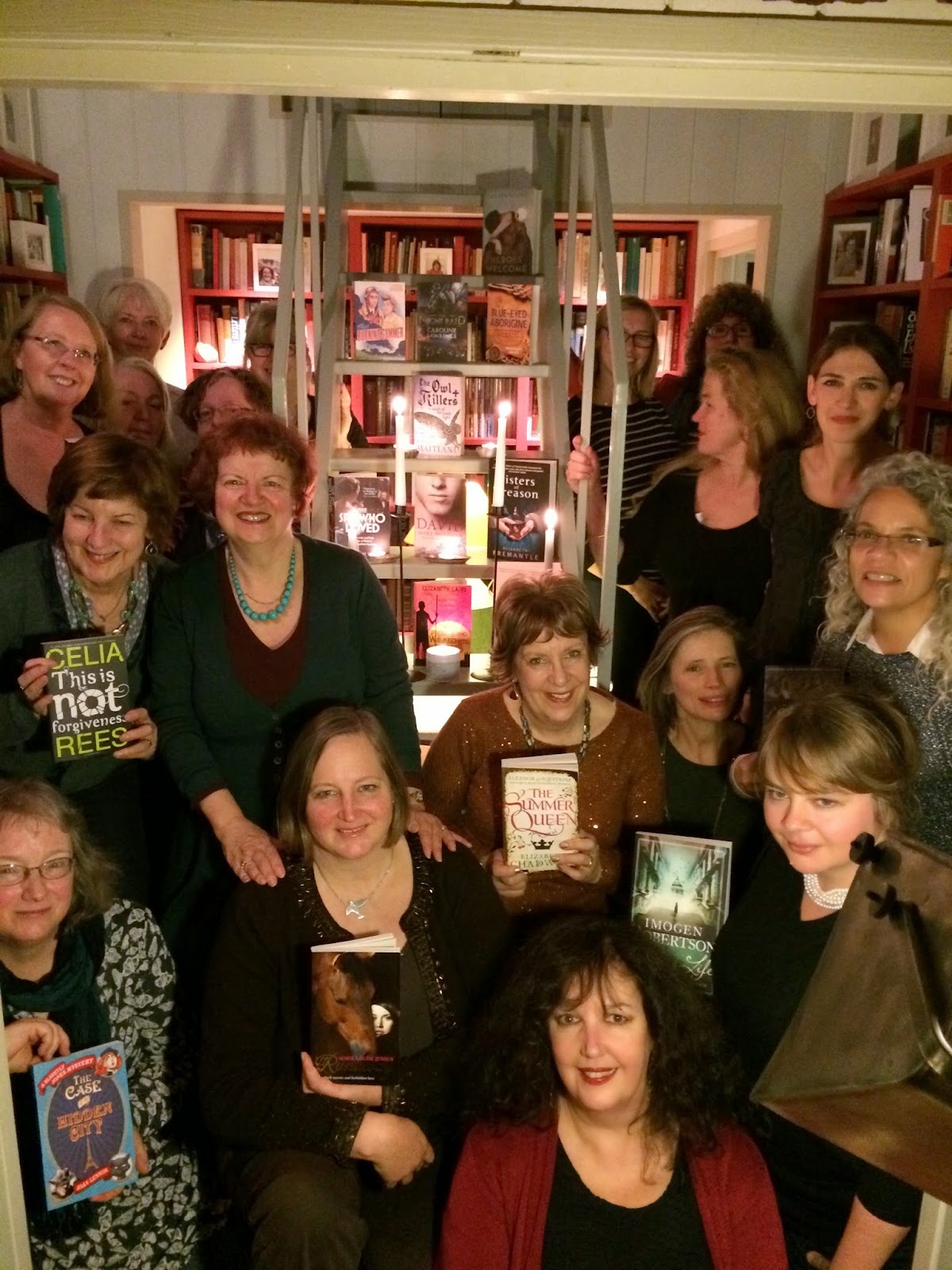 Above is a goodly portion of us, taken in December, at the same venue as three and a half years ago in Michelle Lovric's Thameside apartment. That's Michelle front right but you can't see that she is holding her latest novel, The True and Splendid History of the Harristown Sisters.

On the left are Joan Lennon and Marie-Louise Jensen, on the right Imogen Robertson. Behind Michelle is Elizabeth Chadwick with Lydia Syson and Catherine Johnson on the right as you look and me on the left. Left of me is Celia Rees. Behind that it gets hard to see us properly.

It's darker in December than when we were last photographed and I think there were more of us this time, so we divided up and had some half and half shots too: 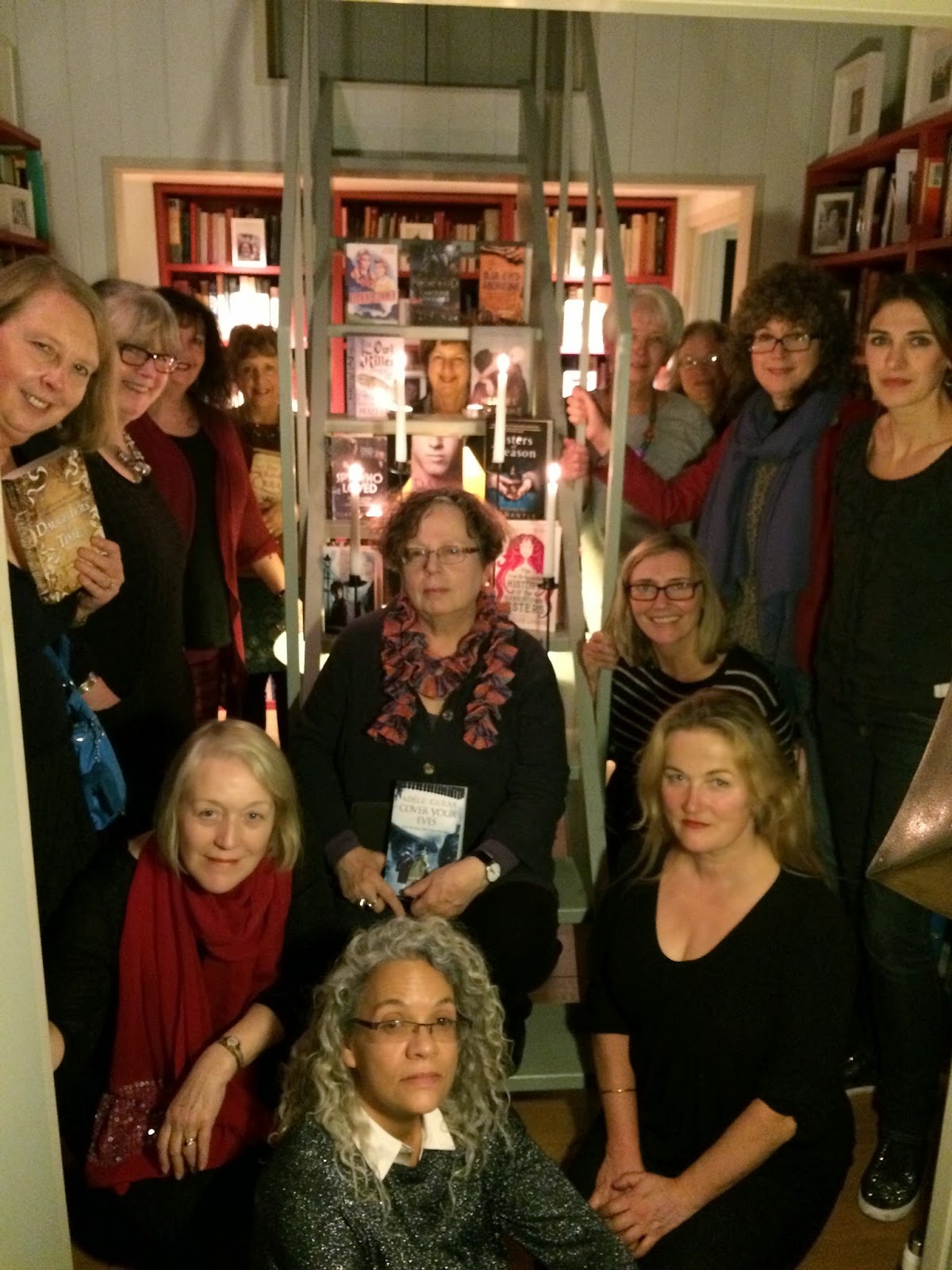 Here, Catherine Johnson is in front with Adèle Geras behind her and Kath Langrish on the left and Louisa Young on the right.On the right of Adèle is Liz Fremantle. On the left behind them you can see Leslie Wilson, Penny Dolan, Michelle Lovric and Elizabeth Chadwick. Celia Rees is peeping out from between books. On the right are Sue Purkiss, Joan Lennon, Caroline Lawrence and Clare Mulley. 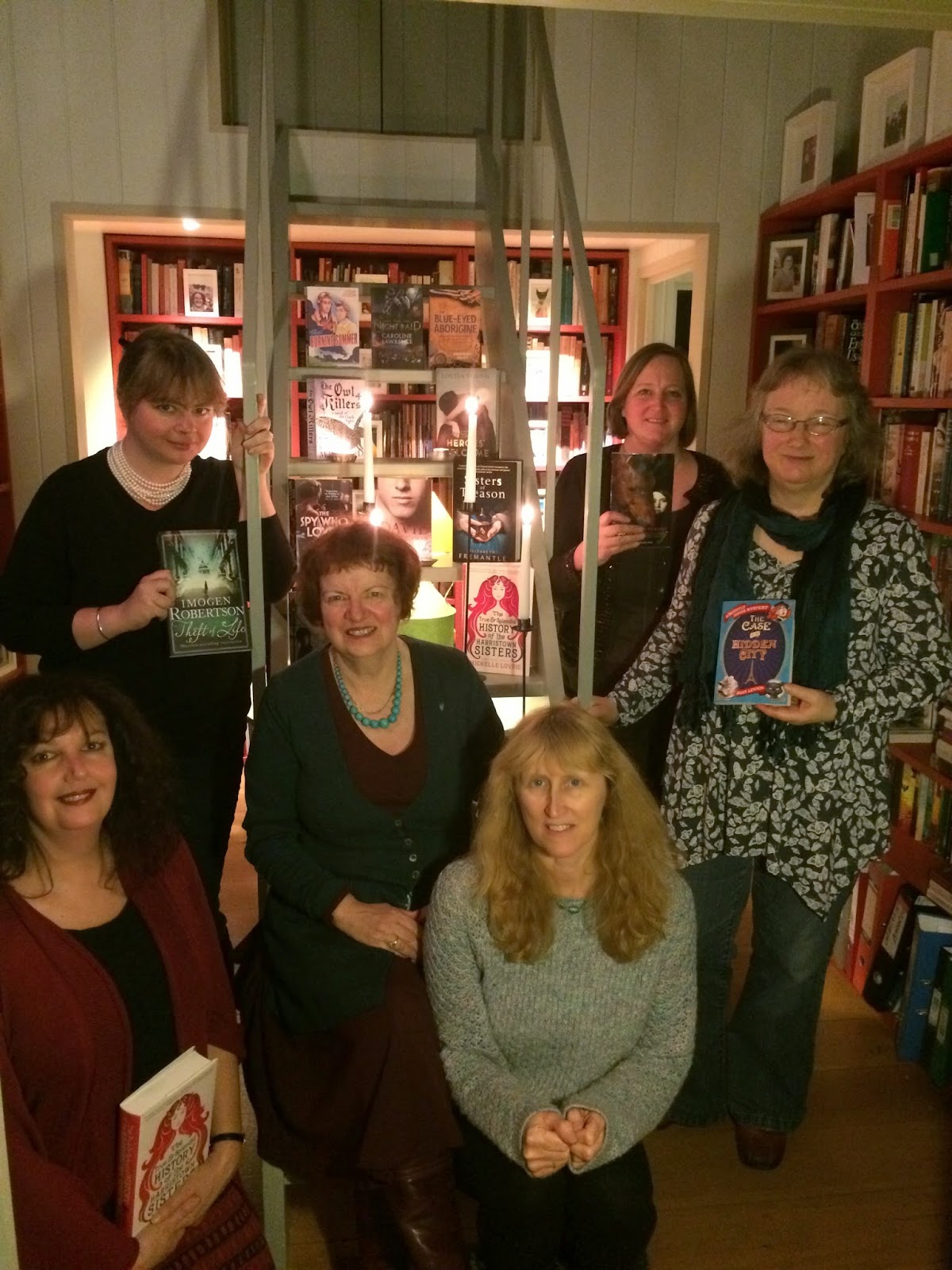 This one is the "other half" of us, with some of the same people again. Michelle is front left this time with a rare shot of Anne Rooney, out technical support guru, on the right. I am between them. To the left Imogen Robertson and to the right Marie-Louise Jensen and a clear view of Joan Lennon.

I had forgotten to bring my latest book to hold but if I had remembered it would have been this: 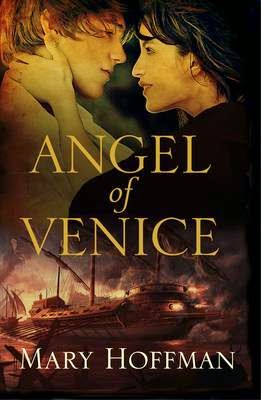 And we even managed to get some of our invaluable Reserve History Girls Along:


We were gathered partly to have new photos and partly to celebrate keeping the blog going for three and a half eventful years involving many new books, gains and losses of nearest and dearest, weddings and funerals. (I myself have become a grandmother - twice- since July 2011).

Since the History Girls site was set up at Michelle's we also indulged in a little blue-plaquery: 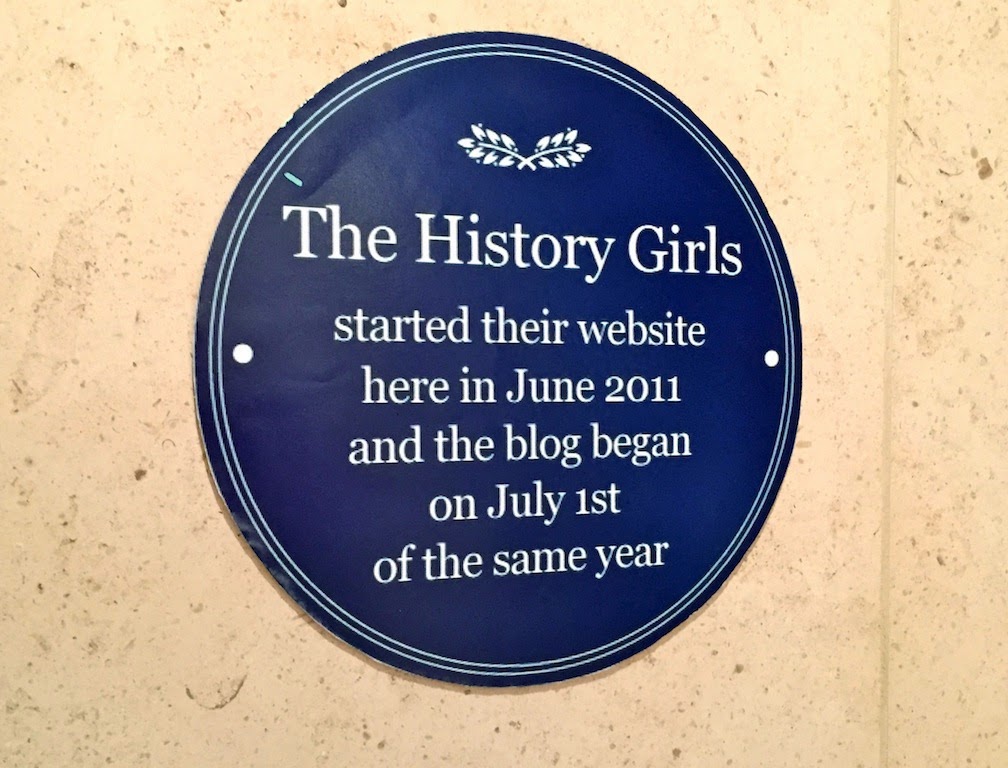 And the theme continued into our tea-party: 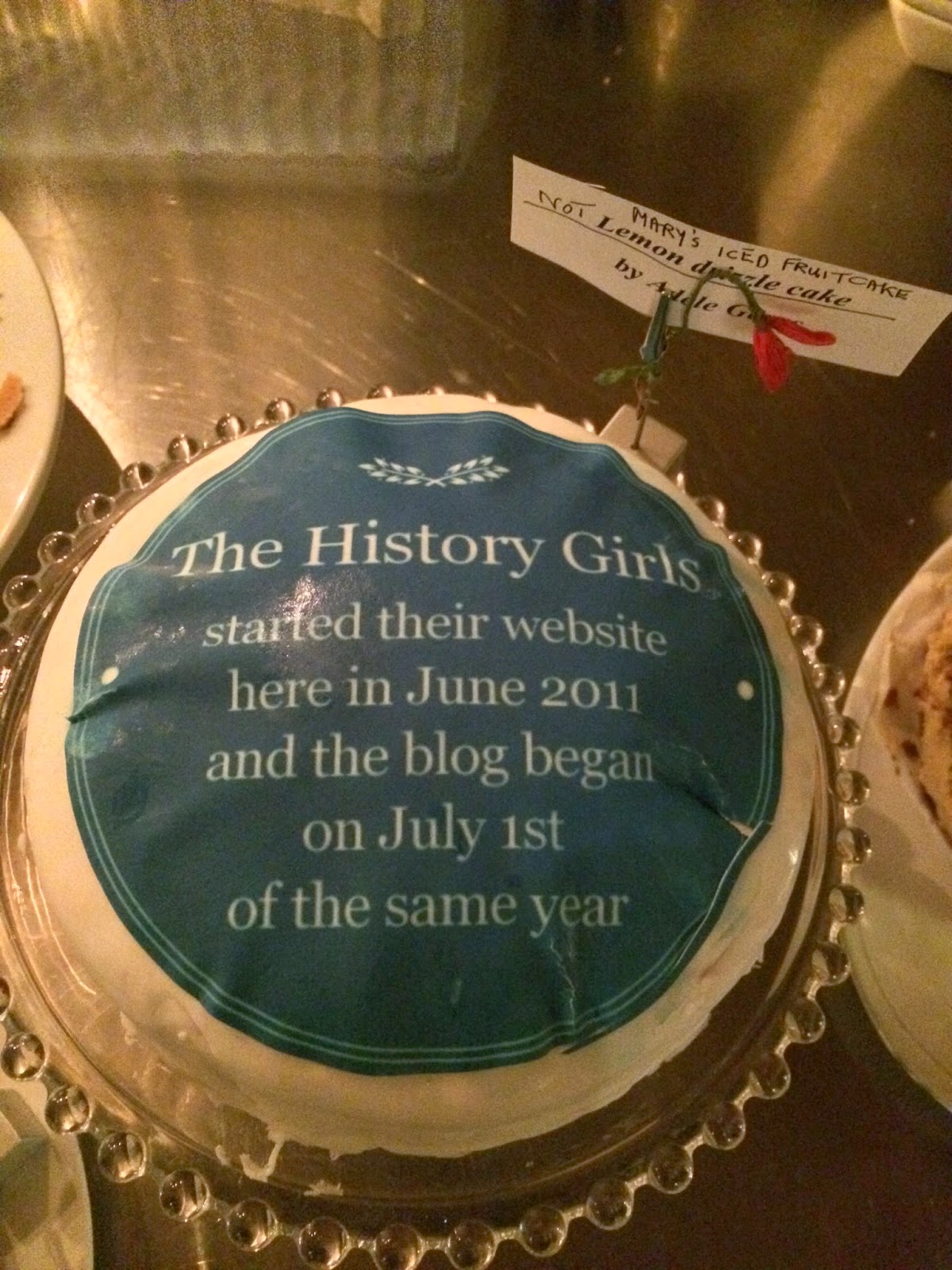 That was a fruit cake made by Adèle and there were lots of other goodies too: 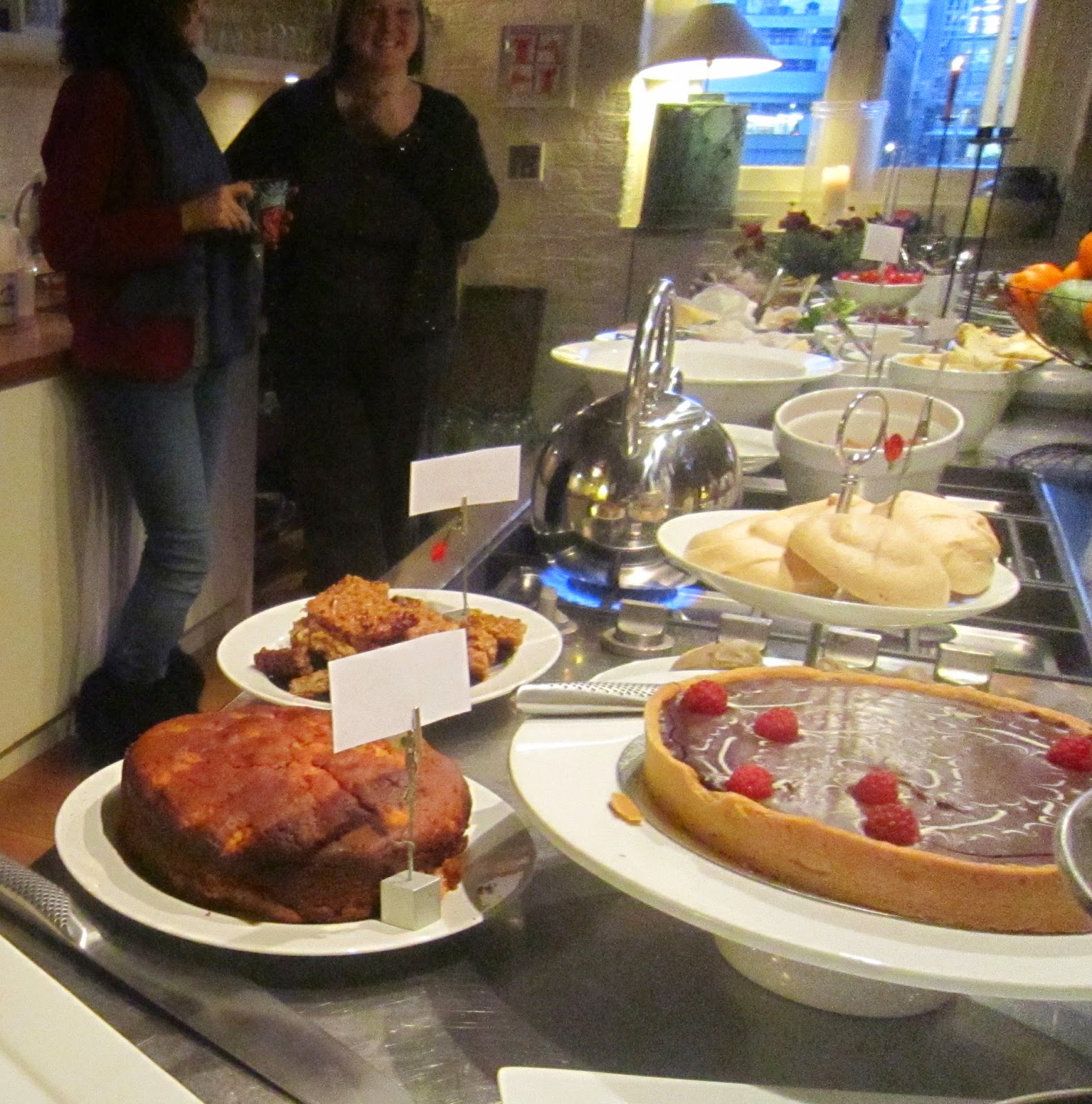 British Bake-off, eat your heart out! I had the honour of cutting Adèle's cake while Leslie wilson cut her own chocolate and chestnut one: 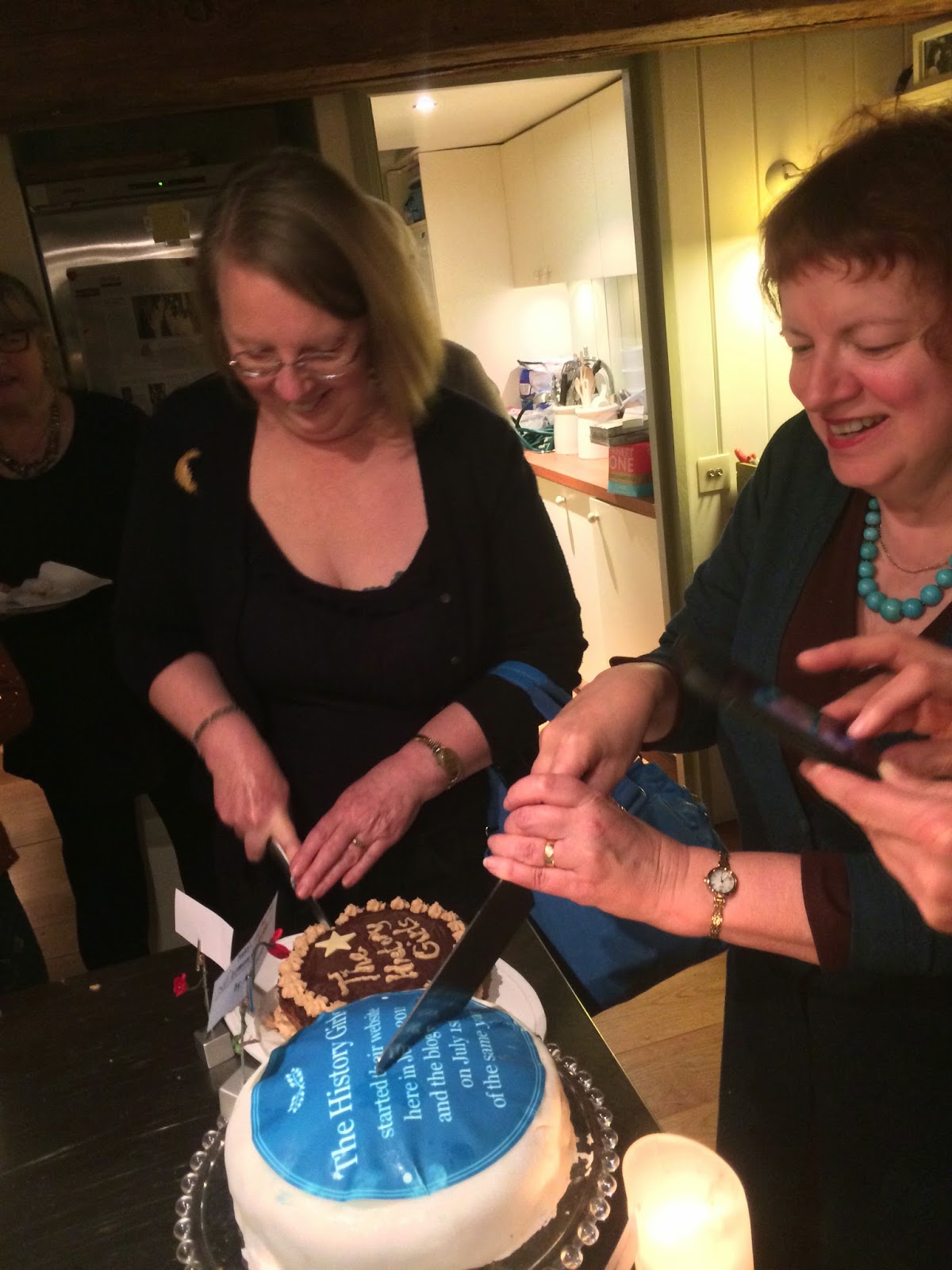 You can read all about the new History Girls on the About Us page, including the Reserves, who also include Maria McCann, Ann Turnbull and Susan Price. Some - Laurie Graham, Ying Lee, Carol Drinkwater, Kate Lord Brown, Clare Letemendia, Gillian Polack - do not live in the UK and were unable to join us. But we felt they were there in spirit.


All the photos shown here were taken by the History Girls present or by honorary-HG-for-the-day Isabel Adomakoh Young, Louisa's stunning daughter. Someone managed to catch Isabel doing her stuff: 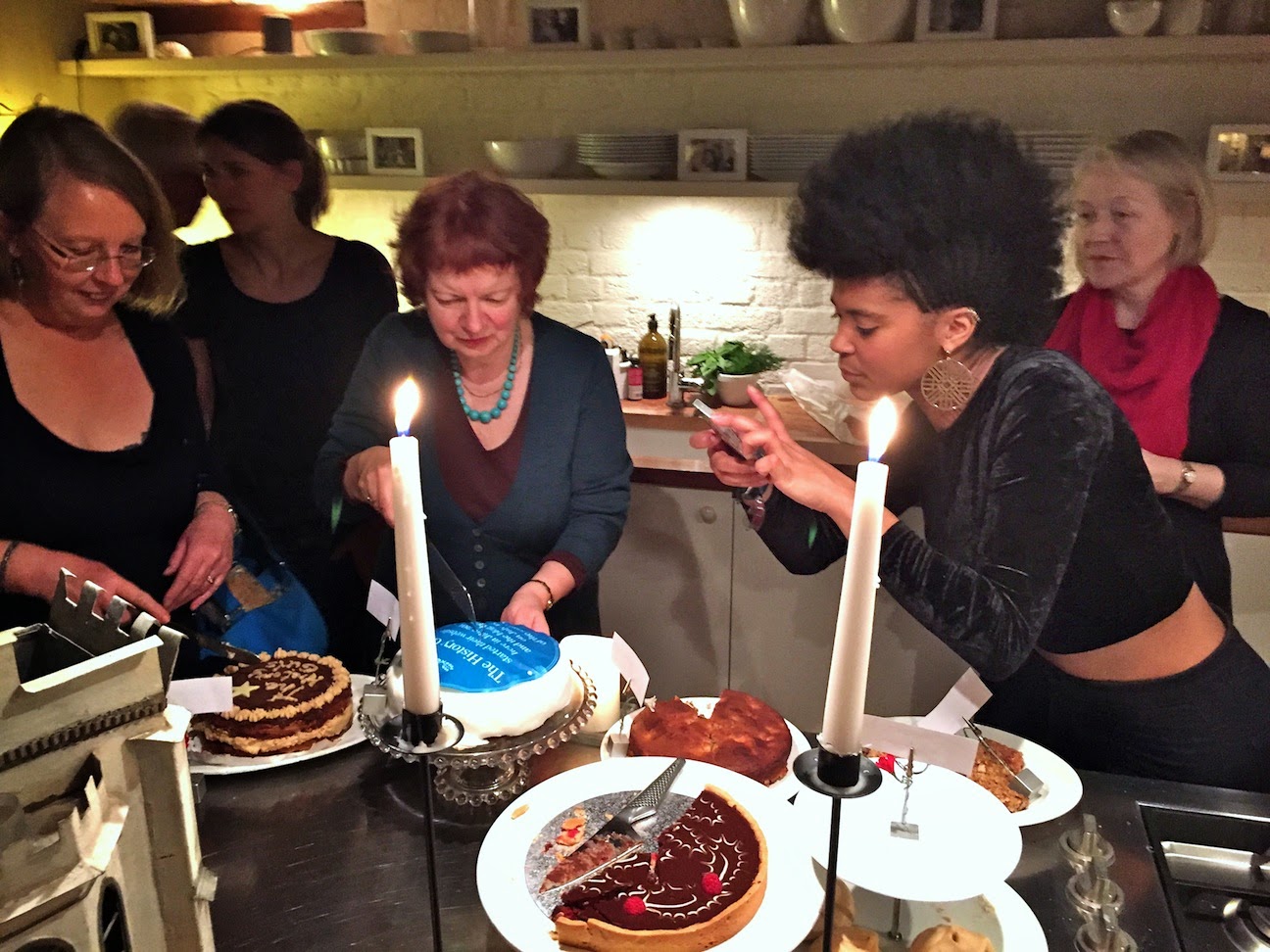 As we enter on to another year of history and adventures, we are thrilled to have so many talented writers on board and hope you will continue to enjoy their posts.

I wish I lived a little closer: I'm very proud of belonging to this group. Happy New Year, to us all!!

Gillian, you have taken the words out of my mouth. I was so sad not to be with you all on this auspicious occasion. Happy New Year to us all, indeed!

I was otherwise engaged on that day, and sorry not to be there - it looks like a lot of fun! Happy New Year to all my fellow History Girls.

It was a great afternoon, Mary & Michelle and everyone so thank you both and all. I really enjoyed the fine Historical Cake-Off, speaking as one of the shadows lurking under the ladder.

It was a lovely afternoon! Great company, great food..great venue and a wonderful host!