Undress your mind by Lydia Syson 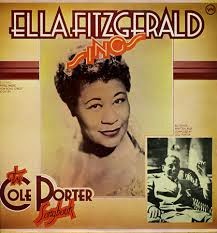 Ella Fitzgerald introduced me to sexology.  I was probably eleven or twelve when I fell in love with the Cole Porter Songbook, though it was years before I realised exactly what Ella was singing about. Alfred J Kinsey’s Sexual Behaviour in the Human Male was published in 1948, and copies of his ground-breaking survey of contemporary sexual mores, based on thousands of extraordinarily intimate interviews, sold as fast as Gone with the Wind. By December, the first sexology bestseller had made it to Broadway, via Cole Porter’s sensational musical Kiss me Kate:

‘According to the Kinsey Report,
Every average man you know
Much prefers his lovey-dovey to court
When the temperature is low…’

(If you know the song ‘Too Darn Hot’ through Ann Miller’s superb rendition of it in the 1953 film version, you might notice that Kinsey has become ‘latest’…I’d love to know exactly why.)

Kinsey is just one of the leading sexologists whose ideas and techniques are currently 'laid bare' at the Wellcome Collection in London.  The Institute of Sexology: Undress Your Mind is a free exhibition which sets out to explore “the big questions of human sexuality.” It does so with admirable candour and breadth, using a combination of Henry Wellcome’s original collection of global erotica, recent and contemporary art, photography old and new, video, live performances and a great deal of discussion.  Don’t be put off by the fact that it has been designed as an evolving, participatory exhibition, which may well change in the course of the ten months for which it will run.  You can quite easily enjoy it without leaving a trace of your thoughts behind, and I'm sure it will be worth revisiting. 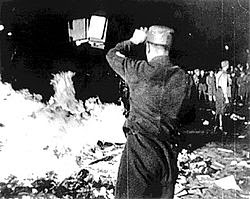 Hirschfeld was both openly gay and Jewish, and he was also an activist, promoting scientific knowledge about homosexuality because he wanted to change people’s attitudes to sexual minorities.  Most importantly, he wanted to change the laws governing sexual behaviour, specifically Paragraph 175, which not fully repealed in Germany until 1994. (And here I can’t resist adding the fact that the always admirable Conrad Veidt, star of the film Contraband (1940) which features in my novel ‘That Burning Summer’, and more famously Casablanca, played one of the first sympathetic homosexual roles in film history in Hirschfeld's (and Fassbinder’s) 1919 polemical drama Different from the Others (Andersals die Andern)) 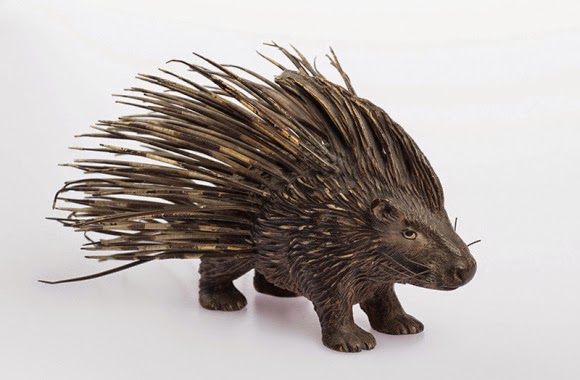 Despite its faintly titillating subtitle, this exhibition doesn’t so much undress your mind as send it scuttling down an almost bewilderingly vast variety of different pathways. The range is absolutely huge – you’ll see Marie Stope’s careful analysis of her own sexual feelings on a day-by-day basis alongside the symbolic bronze porcupine model Freud kept on his desk to represent the challenges of human intimacy. From a nineteenth-century manuscript of an Indian flying phallus, a Nepalese version of the Kamasutra and a viciously-toothed steel anti-masturbation device for young European men, you pass quickly to material from the archives of anthropologists Bronislaw Malinoswki and Margaret Mead and then on to a replica of Wilhelm Reich’s mythical ‘orgone accumulator’ (parodied by Woody Allen as the Orgasmatron in Sleeper). It would be unrealistic to expect a show on this scale to be able to hold your hand all the way down so many divergent routes, and you are frequently abandoned before you reach the foothills of an idea. But the galleries certainly set the mind roaming. 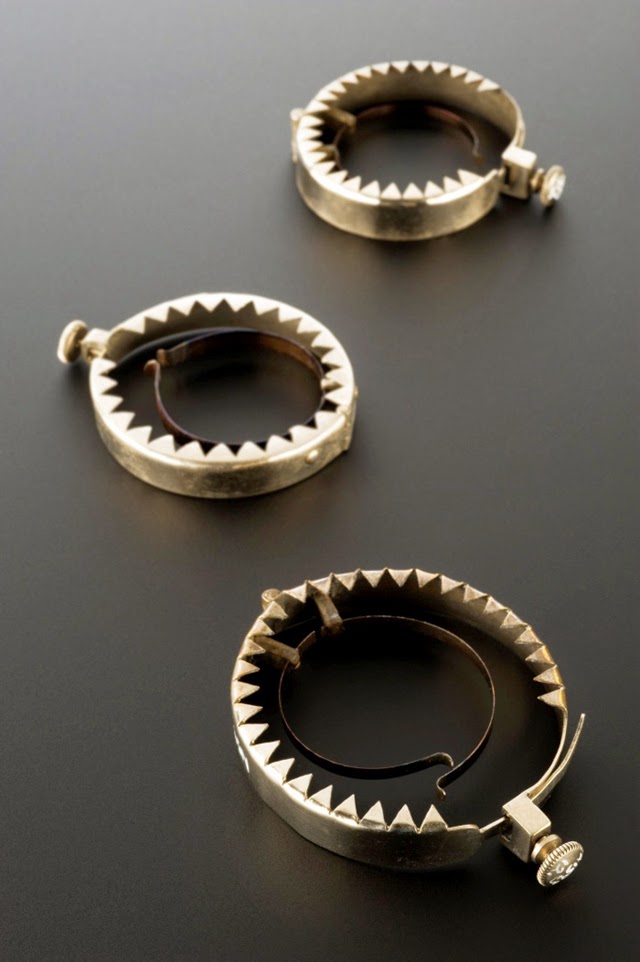 Several things struck me.  One relates to my age - less than half a century - but how quickly memories become redefined as history!  I reeled a little from a label describing a diaphragm as a popular method of contraception in the 20th century. Later, and for the first time since they dramatically appeared in tube stations when I was a student in the late 1980s, I was confronted by the unforgettable AIDs ‘Don’t Die of Ignorance’ posters, which rightly corrected the government’s initial emphasis on homosexuals and drug users as transmitters and ‘victims’ of HIV.  A few years after this campaign, in 1989, the same government tried to suppress the very first NATSAL (the National Survey of Sexual Attitudes and Lifestyles) by withdrawing Department of Health funding.  The Wellcome Trust’s instant response to Thatcher’s intervention was to take on the full cost of funding this ground-breaking research itself, and this story is told in the exhibition too. Politics are rarely far from sexology. 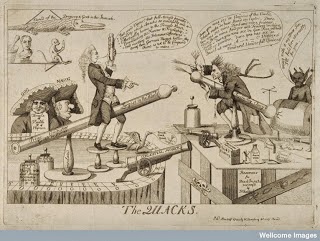 The Institute of Sexology bills itself as the first British exhibition to bring together “the pioneers of the study of sex".  I must confess I’m sorry it only covers the last 150 years, and hasn’t therefore included the very first and most colourful of these pioneers, and my own favourite, Dr James Graham.  His Temple of Health was something of a precursor of the Wellcome Collection itself, very much a ‘destination for the incurably curious’.  Wellcome co-curator Kate Forde is quoted as saying “It makes sense to start from the point where people wanted to legitimise sex by looking at it as science.”  I argued in Doctor of Love: James Graham and His Celestial Bed (Alma Books, 2008) that this is precisely what this eighteenth-century medical entrepreneur was trying to do, harnessing all the latest innovations in science, music and mechanics to improve marital relations and produce perfect babies, explaining his thinking in considerable detail in eye-opening lectures ‘On Generation’.

Graham was attempting all this at a time when scientists were still called natural philosophers, and anyone operating on the fringes of the medical establishment was denounced as a quack.  The Electric Doctor was a man who perfectly exemplified his spectacular, speculative era.  He was hugely progressive in multiple ways, but he didn’t spawn followers, and left sparse records behind - not even an image of his famous bed.  Controlled trials were in their infancy at this point, so even if reliable accounts remained, they would lack rigour by twentieth-century standards.  Even more to the point, exhibitions are primarily about objects, and, sadly, I should think it would take several times the budget of this show to build an accurate reconstruction of the Grand State Celestial Bed, which would be the best way to do the doctor justice.  The original certainly bankrupted Graham in 1781.

The showcase ‘medico, magnetico, musico, electrical bed’ - re-imagined above by Tim Hunkin - was huge: twelve foot by nine.  Its vast dome, decked in musical automata, was festooned with fresh flowers and topped with a statue of Hymen, the god of marriage, holding aloft a torch ‘flaming with electrical fire’.  Live turtledoves nesting on the bed were soothed by oriental fragrances and ‘aethereal gases’ (probably nitrous oxide) which wafted from a reservoir inside the dome.  Organ pipes breathed out sublime ‘celestial sounds’, intensifying with the ardour and movements of the bed’s occupants, who were reflected in overhead mirrors while streams of light played over their pillows.  Coloured silken sheets covered a mattress stuffed with horse hair from the tails of the finest stallions. Every element of the bed was conceived to evoke fecundity and promote fertility, down to the magnets which rotated beneath it, supposedly providing a ‘sweet undulating, titillating, vibratory, soul-dissolving, marrow-melting motion’.  (Their power must have surely been more symbolic than scientific.)  A tilting inner frame allowed the ‘gentleman’ to ‘follow his lady downhill’ to help conception, and at the head of the bed, in the eighteenth-century equivalent of neon lights, a single sparkling slogan in electrified burnished gold commanded: ‘Be fruitful, multiply and replenish the earth!’

This bed was the final and most elaborate incarnation of an idea the doctor had been exploring since he first began to experiment with medical electricity in the American colonies.  In time, Graham hoped, every husband and wife would have a version at home.  In my book – and also in Roy Porter’s Health for Sale: Quackery in England, 1660-1850 (1989), where I first encountered Graham - that certainly qualifies him as a pioneer in the field of sexology.

And what a tremendous dance routine by Ann Miller there - thanks!

Very glad you watched that, Kath! I did look to see whether it really could be a copy of the Kinsey report she's reading, but sadly I don't think it was. At least not an edition I've been able to google.

This is a fascinating article...and I will look up the book y ou mentioned on my post just above you!

Didn't Emma Hamilton sleep in an electric, stimulating bed of some sort too...? BTW, on seperate note, my daughter loved Burning Summer!

* I mean 'A World Between Us', though she did love 'The Burning Summer' too, as you know!