DOES BEING A HISTORICAL NOVELIST WARP YOU? by Leslie Wilson

I was thinking of this as we drove out of London just before New Year; when I saw a pub sign that was a metal bunch of grapes, thought: That looks old! looked again, saw it was modern, and lost interest. It is one of the downsides of being a historical novelist, I fear. Mentally cutting out all the buildings that weren't there during your period. Clearly, if you are writing about medieval times, you might find your London tends to be largely non-existent, but even if you are in Georgian times, as I am, it means that large swathes of towns have to be fuzzed out as you look at them. In Berlin-Charlottenburg, when I was writing Saving Rafael, I was always crossing out the modern bits annoyingly at the entrance floors of buildings. Here is Jenny's house from Saving Rafael, having had The Treatment. Later in the novel, a lot of damage had to be added from bombing.

I remember returning to Hong Kong in 2000, having spent eighteen months there in the early '80s, and then having written a novel set in the Hong Kong of the 1880s (The Mountain of Immoderate Desires). There are still some old buildings left in HK, but not many (one Hong Kong friend appalled me when he came to Henley and demanded: 'Why don't you knock all this old stuff down and build high-rises? You could just keep one or two old houses, to show people how it used to be). But I had, by then, spent so much time peering at numberless old photographs of the territory, that when I looked at the new city, I could see the old scenes like a veil over the new buildings.
My father used to like to quote Marshall McLuhan's saying: 'We drive into the future using only our rearview mirror', saying that people (this included me, even in childhood obsessed with history) looking into the rearview mirror and seeing a coach and horses behind instead of a dull and boring car. I thought, in those days, that this would be an improvement. Adulthood, which is supposed to bring maturity, has at least brought me the insight that the coach and horses, to those living at the time, would be just as mundane as a Mondeo, whereas of course to those who experienced the first cars, and had to cope with their horses' fear of them, the car was anything but dull and boring.

Though on the Marshall McLuhan theme, skippers of vessels in Hong Kong harbour in the 1980s did still sometimes see junks (sometimes whole fleets of them) and sampans from their bridges. It all added to the vivid panorama of the port which one captain told the South China Morning Post, risked reducing him to a jibbering wreck. I know the above photo does look as if I'd photoshopped an old picture onto a new one, but believe me, I haven't a steady enough hand to do the scissoring out; those junks really were sepia-coloured.
I fear, however, that I am still looking in the rearview mirror; at present, for example, I have a tendency to mutter that we need Charles James Fox. I read the paper, more or less, every morning, only to let modern politics fall out of my mind and be more concerned with the state of Parliament in the late eighteenth century, and the state of play in the battle to win control from the meddling George the Third. His descendant, Charles Windsor, bids fair to rival him in going beyond his constitutional role, it has to be said - and there you are, I'm off… But tell me, have you heard whether the King is truly going mad again?
You have to button up your mouth for fear you become a bore - unless talking to other Historical Novelists, who understand.

If you have adopted some of the language of your chosen period - something I normally find myself doing, except when I wrote about Nazi Germany, and had to translate all the dialogue out of German into English, you find yourself using its expressions, especially when writing. To be sure, I normally managed NOT to start talking German to incomprehending Brits, but it is much harder if your characters do speak the language you normally speak. Unless you are Hilary Mantel, whose characters all talk modern English. When she asked me for help with German for Wolf Hall, I was reaching out to my shelves for my 15th-century German books, and was a little disappointed to hear that she wanted modern German. It was easier, however! Hilary, however, does get kept awake, as she told the Guardian, by Tudor courtiers gossiping.
Finally: if the screening process I have mentioned above does fail in order to allow one to notice anything happening in the present day, specific to the present day (as opposed to eternal things like sex, grandchildren, human relations, gardening and making bread*), you are riddled with frustration because you CAN'T PUT THEM IN YOUR NOVEL! 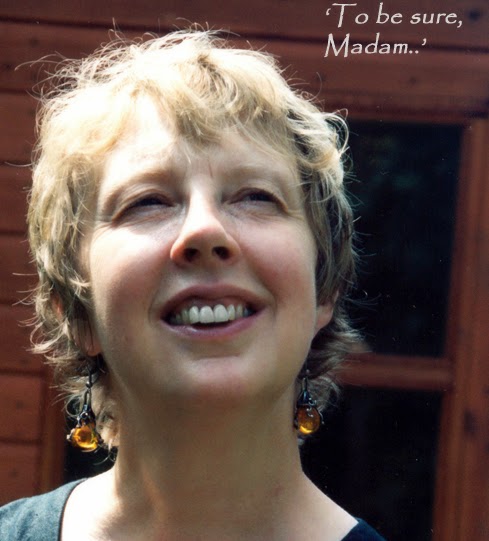 So what does being a historical novelist/novel reader do to you???

*Though on that topic, you have the perennial problem and eternal/internal talking point: Is the Past Another Country? Did kneading dough feel different a hundred years ago? It has to be said that baking must have been a whole lot different without a thermostatted oven!
Posted by Leslie Wilson at 00:30

I loved this post, Leslie - and I know just what you mean about wanting to 'edit out' the bits of history which don't fall within one's chosen period... Writing about eighteenth century Germany and England in my novel, Variable Stars, presented the most challenges, for me; although even trying to recreate mid-1920s London, for my current book, is not without its problems! As for the language... it was some time, after finishing VS, that I stopped wanting to write 'I am, Sir, your very humble and obedient servant' at the end of letters, instead of our own 'best wishes'...

Lovely post, Leslie - and that's a beautiful photo of the junk. I first came across junks in Arthur Ransome's 'Missee Lee' and thought them terribly romantic and exotic, but you're right of course, to a junk owner, it's just another method of transportation, to be traded in for something more efficient as soon as he has the money. Humans are tremendously pragmatic about the present - and then all nostalgic about the past. We're odd creatures.

The harbour used to be full of motorised junks. Still teak-built, picturesque and I suspect much less hard labour. But the sailing junk was exquisite. Did you like Missee Lee, though? It was my least fave. I liked The Picts and the Martyrs best of all...

I think you'd quickly develop a feel for bread baking or cake baking temperatures - or for the heat of an iron. I still use the touch test on the kettle when heating water for hot water bottles.

Lovely post, and the 'veils' over modern Hong Kong are fascinating. The junk is like a butterfly!

Chuckle! I used to be a member of the Society for Creative Anachronism, which I joined to get some idea about fighting for my writing of mediaeval fantasy. Wearing armour I quickly came to understand what it felt like and what you couldn't do with a sword.

I had a friend who couldn't pass a pile of hard rubbish left out for the rubbish collector without speculating as to what he could turn this or that into for SCA purposes. But in the end, we had to do everything with modern equipment. Cakes were baked in modern ovens, costumes were sewn using modern sewing machines(except by me - I can't use one, so I made them by hand, but with modern needles), armour made with modern equipment.