WHAT A CAREER by Eleanor Updale

One of the joys of the Internet is how quickly we can now answer questions that we would once have parked in the back of our minds - even when all the libraries are closed.  Here’s a chain of discoveries I made over Christmas.  It all started with a board game, and it led me to a very interesting 20th century man who turned out to share a lot with a 17th century natural philosopher about whom I once knew a great deal.

For those of you who don’t know it, Careers is the best board game in the world 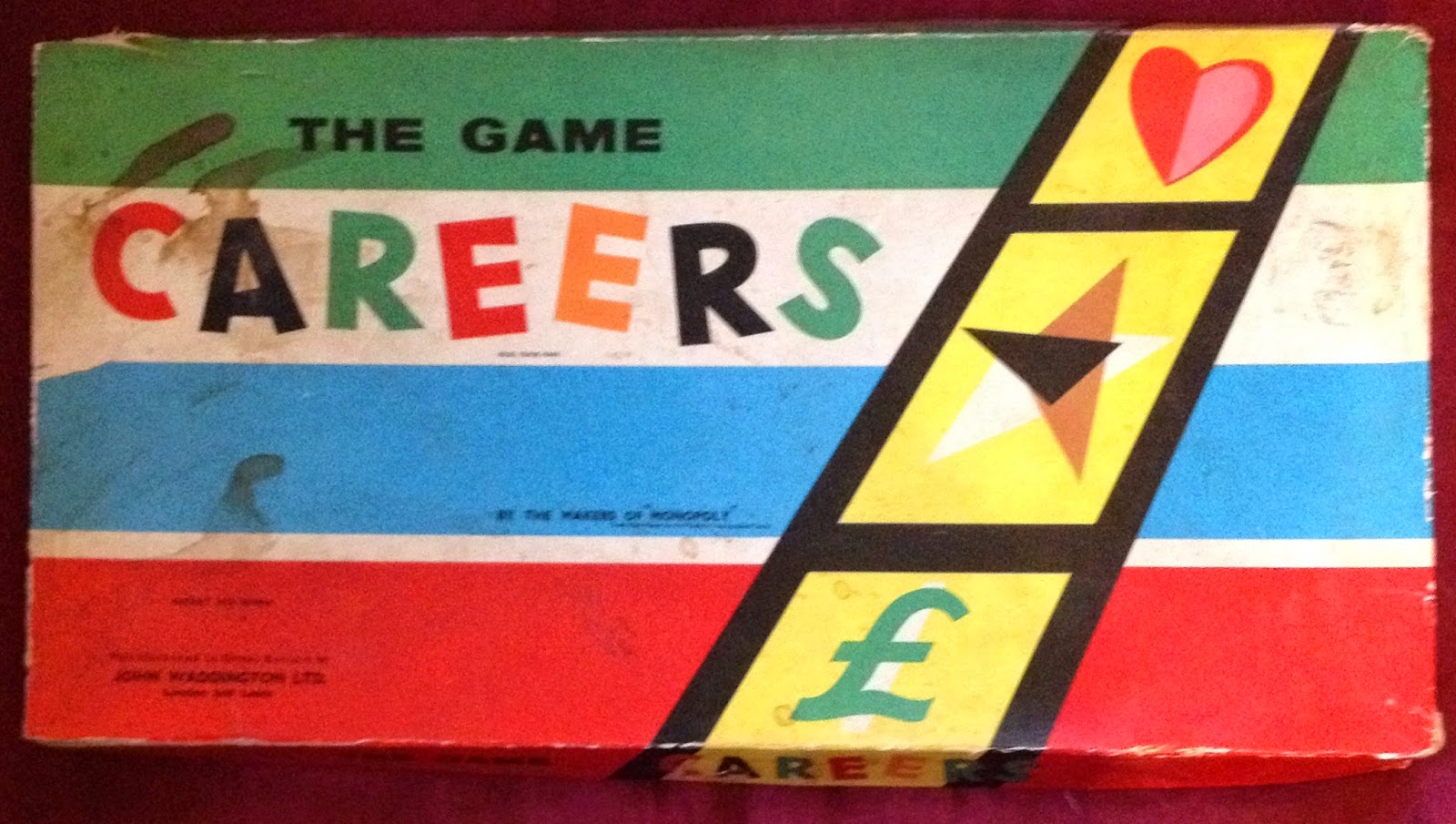 I’m talking here about the original 1950s version, not the feeble ‘updated’ editions of more recent times. We play using a set that has been in my husband’s family for nearly sixty years, and unlike its evil, boring, family-busting cousin, Monopoly, Careers never fails to generate laughter and good will. 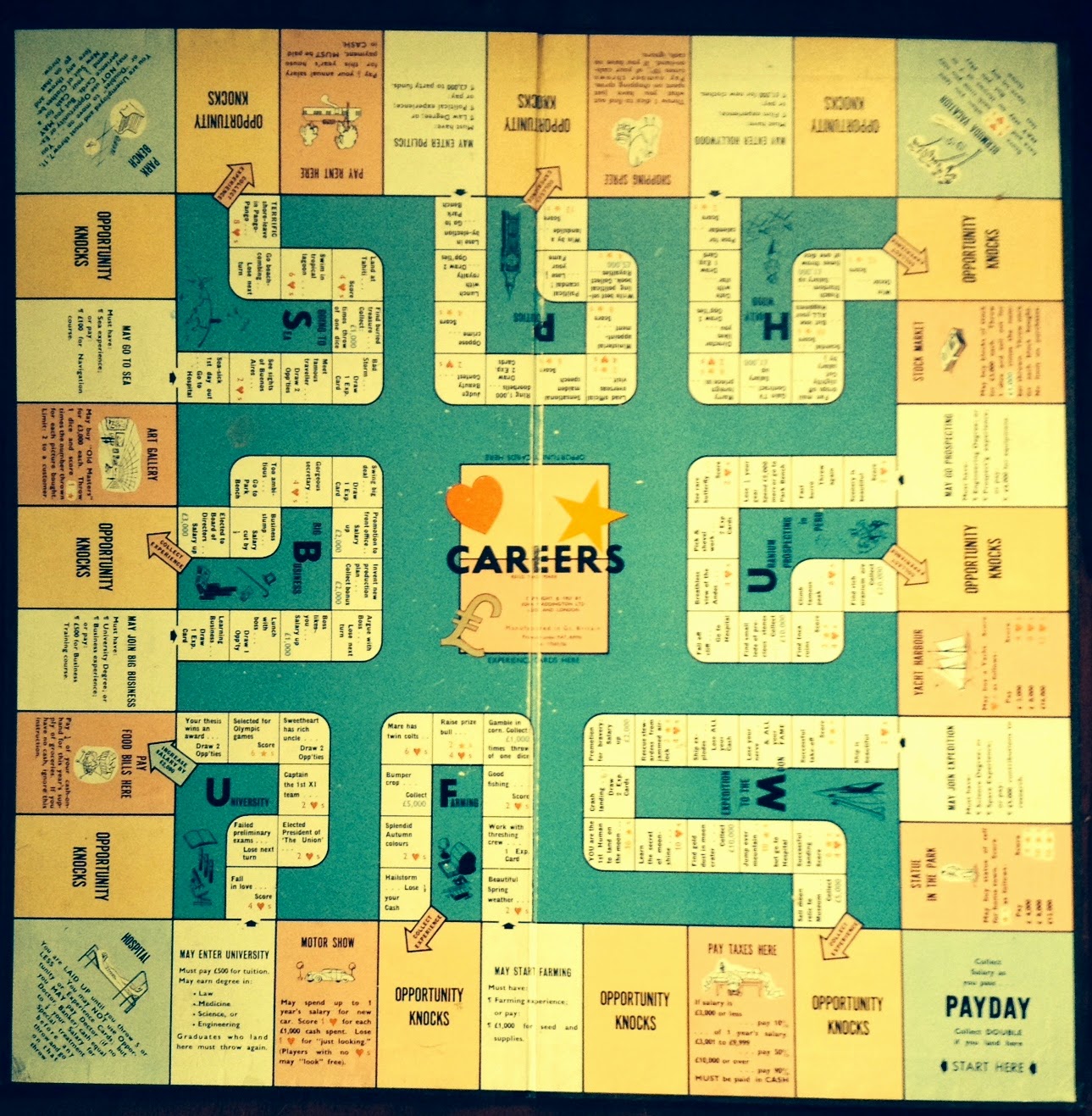 The rules are pretty simple.  You go round the board according to throws of the dice, entering various careers along the way, trying to achieve a formulae of money, fame and happiness that you set for yourself before the game starts. 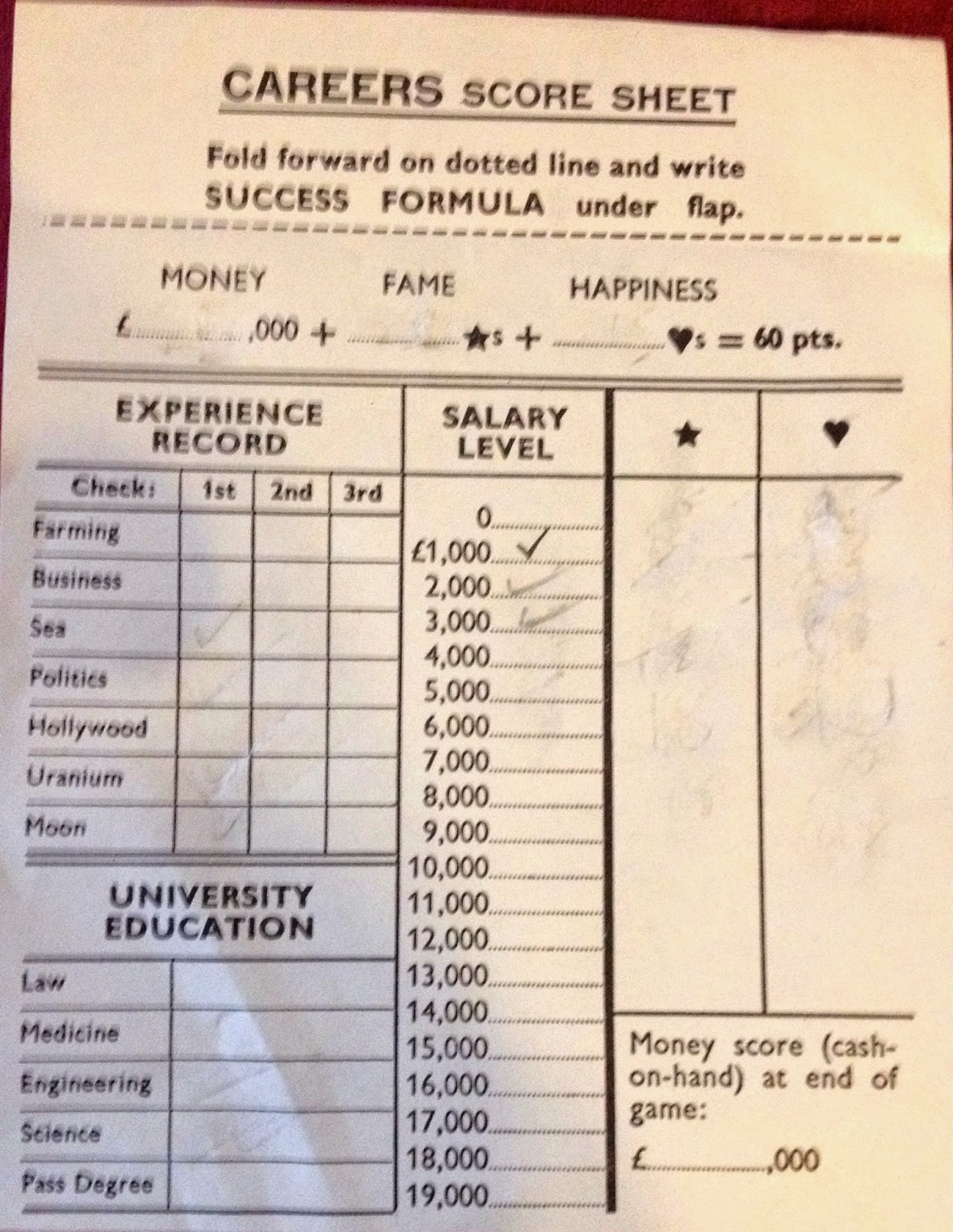 The genius of the game is that it is impossible to tell who is winning until the victor emerges, and fortunes change rapidly, so you are always in with a chance.
One of the most amusing things about Careers is what it says of its own time.
Look at the Expedition to the Moon, for example, plotted out long before the era of space travel: 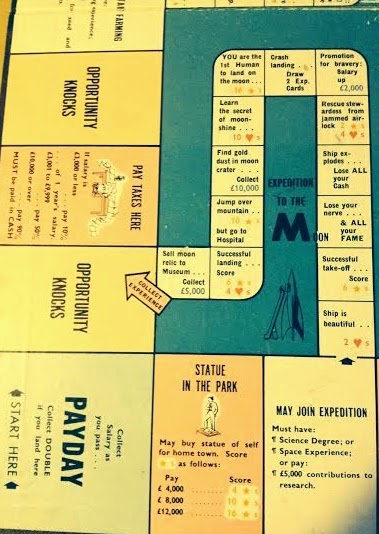 So the game is a bit of a history lesson for the younger members of the family.  It’s cheering to realise from the causal sexism throughout that feminism has achieved  something  since 1957: 'Gorgeous secretary. 4 Hearts'. But some things that raised a laugh a few years just back have reverted to their old status and no longer shock: In the University section: "Sweetheart has rich uncle. Draw 2 Opportunities". At the turn of the century we would have chortled at getting only £5000 for writing a successful book. Now it sounds like a pretty good deal.  And paying to get out of hospital used to seem strange.  Now you can imagine it being in someone's election manifesto.  But don't get me started on that...
For all its anachronisms, the game still captures something true about human beings and human society.  I wondered who had invented it, and it turned out to be a very interesting man, with an intriguing career of his own. 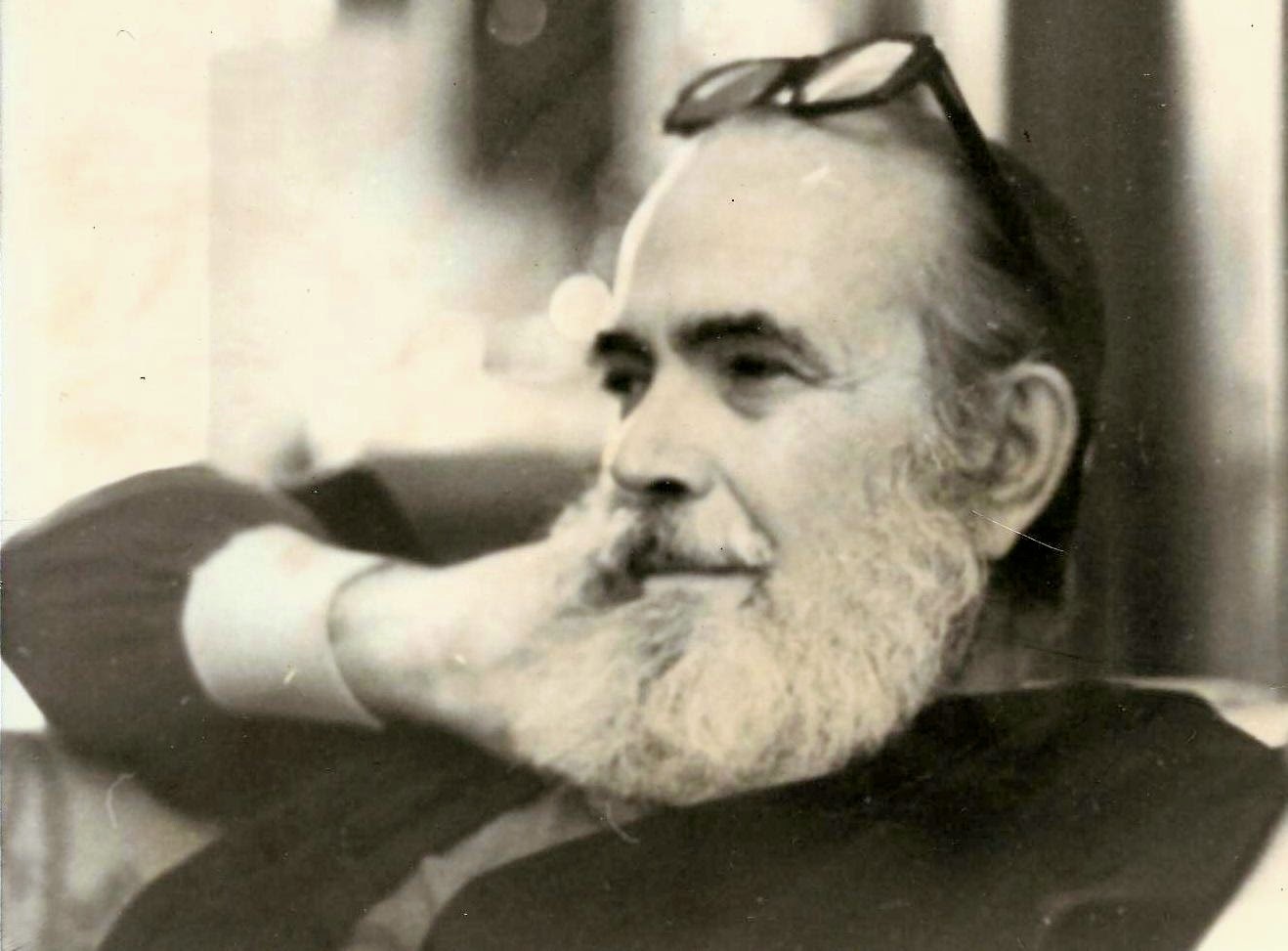 James Cooke Brown was born in 1921, and lived till 2000.  He was a sociologist, a civil rights campaigner, and above all an idealist.  He believed in the possibility of constructing a fairer society, and set to work devising methods by which that might be done. Shortly after the died, his publishers released The Job Market of the Future in which he foresaw a role for computers in a globalised world of work. 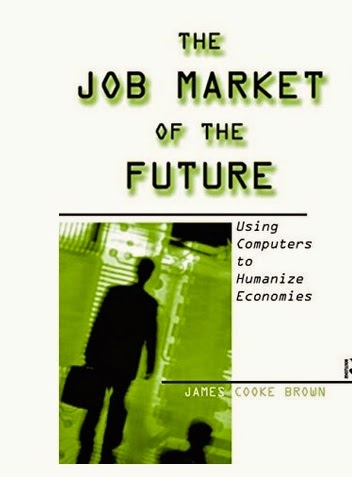 'I shall be bringing an inventor’s perspective to the solving of economic problems' he wrote. 'Blaming people who some might think had “caused" the problems is no part of the inventive process…all we need to know is how to solve them now - preferably with a solution that can remove their structural causes, and so have some chance of being a permanent solution.'

What James Cooke Browne proposed (to grossly oversimplify his theory to fit this space) was a new system for organising work - rebalancing the power relationships so that the person supplying the labour had control of its use.  The ultimate aim was to ensure security of employment combined with a living wage.

All this was prefigured in his even more fascinating book The Troika Incident, a  Science fiction novel published in 1970. 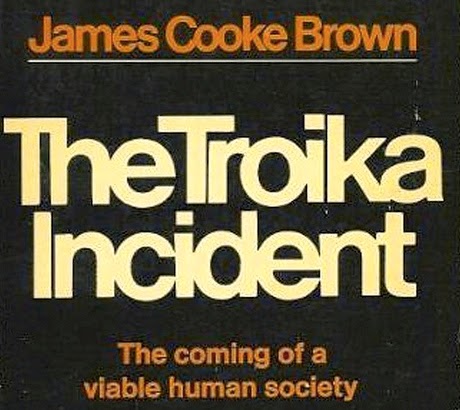 This book is interesting on two levels.  It looks forward to the world in 2070; but its immediate plot is set in 1975 which, at the time it was written, was still in the future.  So characters reflect on who won the Vietnam War (correctly diagnosed as ‘nobody’) and look back on the abandonment of conventional, and in particular nuclear, warfare in 1993 (oh well…) and to the arrival or a more equal society with enough money and plenty of sex.  The job market of 2070 would be a constantly shifting scene, where the least popular jobs were the highest paid.
It’s one of those novels you read for its quirkiness and background message rather than to find out what’s going to happen next - but it’s worth downloading it to one of the electronic readers whose invention James Cooke Brown predicted in this very book, back in 1970.

For people who know about such things, James Cooke Brown is most famous for his tireless work to establish and develop a new universal language: Loglan 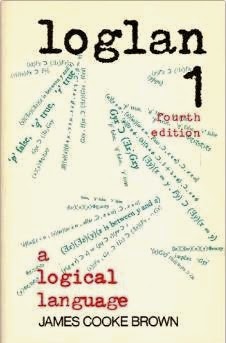 His motivation was (at least) twofold: the primary aim of facilitating universal unambiguous communication between people and between machines; and to test theories that our thinking is determined and constrained by the linguistic apparatus we use.
Obviously, Loglan has not taken over the world, but its exponents still exist, and there is a site you can visit to see how it works http://www.loglan.org/Download/Loglan1.pdf
By the way, history is hisri, and girl is nirli  -  but it’s much, much, more complicated than that, and I haven’t cracked all the rules that would enable me to say History Girls correctly.

Loglan may not yet have been a resounding success, either as a language in its own right, or as a tool for linguistic study, but it is an amazing achievement nevertheless, and it puts James Cooke Brown in good company.  One predecessor, who seems to have shared JCB's ability to drop the preconceptions of his day to enquire, invent and explain was the seventeenth-century academic and cleric John Wilkins. 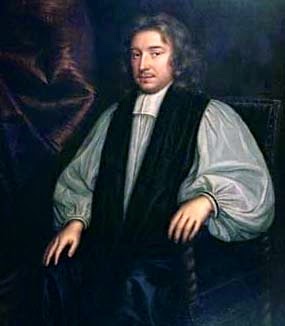 Wilkins was one of the founder members of the Royal Society, who not only predicted space travel and a moon landing, but invented his own ‘universal language.’ 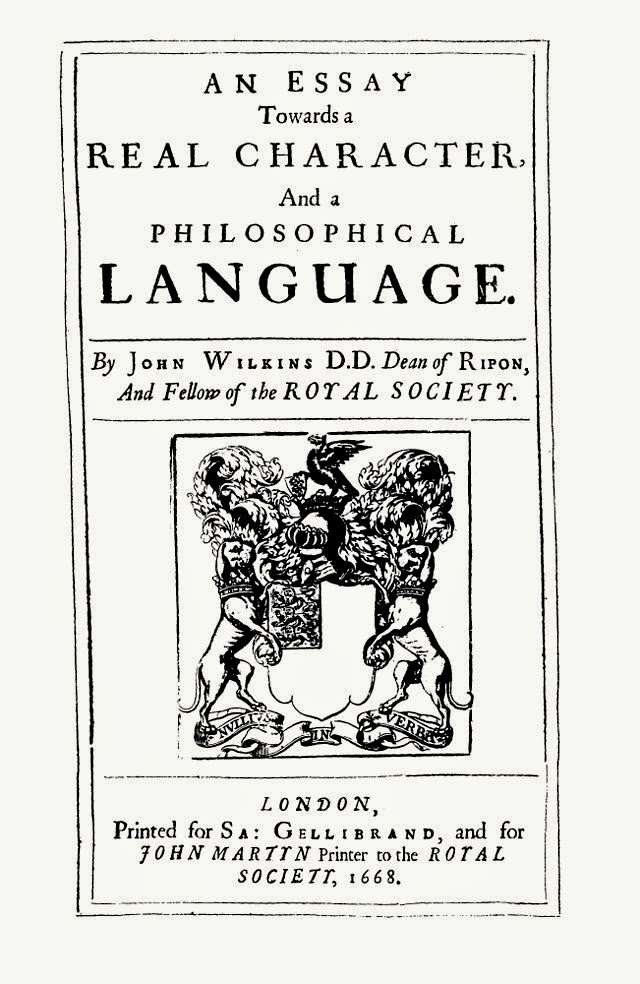 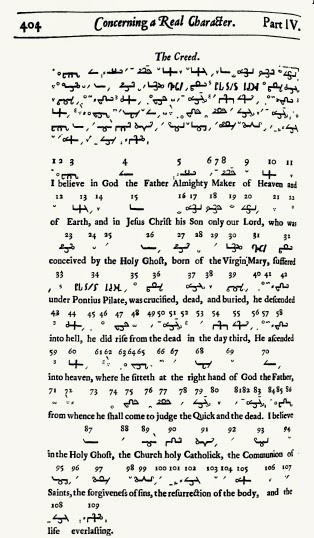 Wilkins’s attempt was more phonetically based, and looks to the modern eye rather like shorthand,
but his reason for developing it was very like James Cooke Brown’s.  Alas, much of the work for it was destroyed in the Great Fire of 1666, but Wilkins soldiered on.  Wilkins also had a profound effect on the way the Royal Society wrote about itself and its achievements, establishing a clarity of expression that survived until the deliberate self-aggrandising obfuscation of specialists in the past century or so.

Across the ages, Wilkins and Cooke are brothers.  And what fun that Cooke’s board game, which has given my family such joy over the years, led me appreciate the link between them, and to find out more about a man who deserves to be better known.

Fascinating! There was Esperanto as well, wasn't there - I know practically nothing about it, but I do remember that when I was a little girl and we were on holiday, the people who ran the boarding house were very involved with it and went to conferences and things. The game looks great!

Interesting connections! Thanks for this!

He sounds like an amazing man. Who would have thought there was so much behind the creator of a board game?