THIS LITTLE PIGGY by Karen Maitland

I don’t know about you, but pigs are the last animals I ever expect to encounter as ghosts. They seem such solid, down-to-earth creatures. But there are a surprising number of accounts of ghostly pigs who appear around about this time of the year. At Andover, Hampshire, a ghost or demon pig appears at New Year, but is also seen whenever there is a bad thunderstorm. (Perhaps because pigs are supposed to be able to predict a storm and run around with straw hanging from their mouths when they sense it coming.) A litter of ghostly piglets are said to run across the road on Christmas Eve at Culcutt, Wiltshire and ghostly sow and piglets appear on All Souls Eve in Bransby, Lincolnshire and also at Merripit in Devon.

The Isle of Man has several legends of faery pigs, while both the church of Winwick and Burnley occupy their present sites because of demon pigs. According to legend, while they were being built, a pig kept moving them during the night to a new location, until eventually the villagers surrendered and left the churches where the pig had put them. The origin of these legends maybe the carvings of pigs on the walls of these two churches which may indicate the churches were built on an ancient sacred site. The boar was the most frequently sacrificed animal among the pagan Saxons. It was seen as a fitting gift for the gods because of its strength, bravery and fearlessness. In Viking, Celtic and Saxon cultures it symbolised strength and resolution. 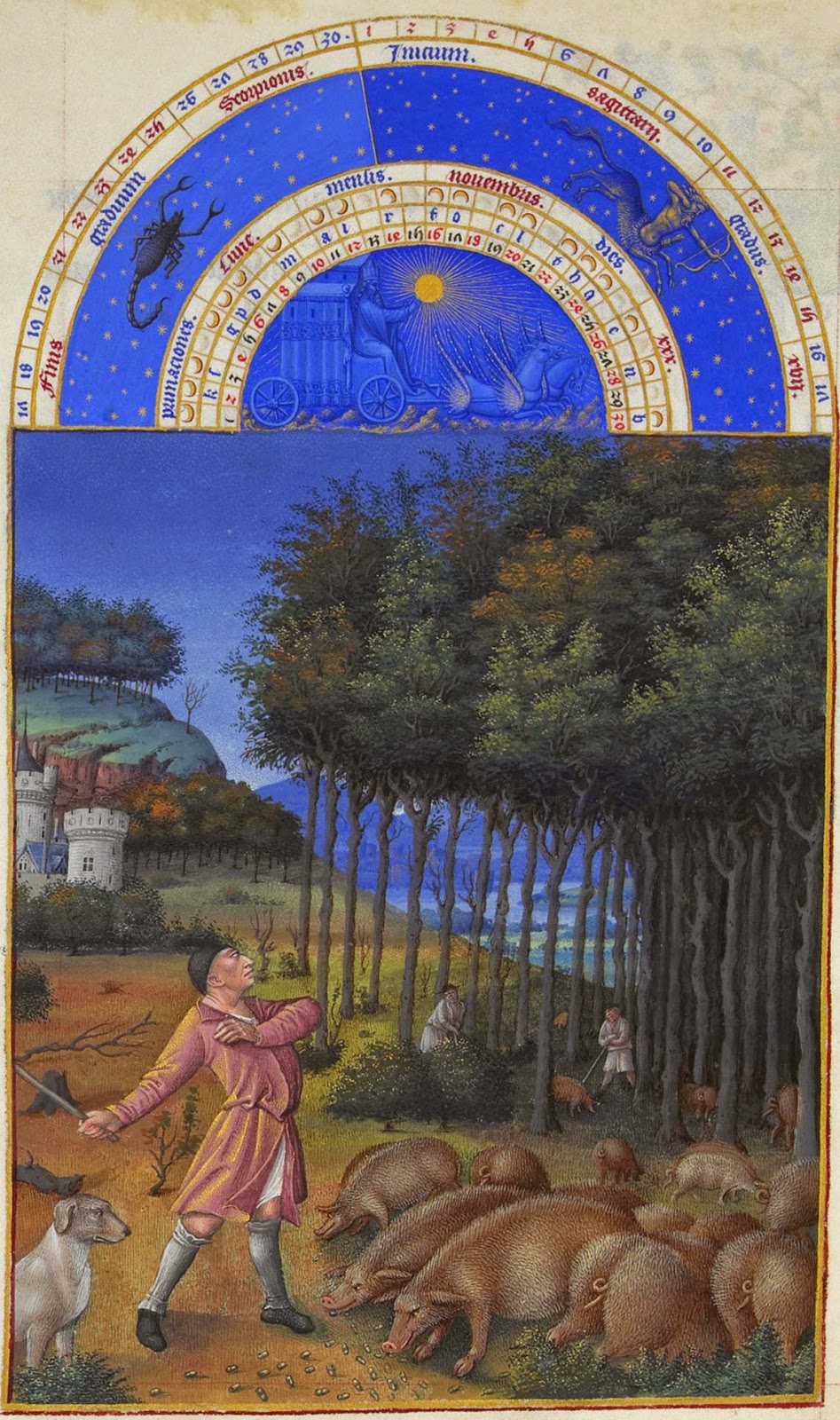 Salted or smoked pork and bacon were the vital food that enabled peasant families to survive winter in the Middle Ages. It was food for free. In summer pigs, were fed on food scraps, waste from crops and even seaweed, and in autumn they were let loose in forest to fatten on the ‘mast’ which included beechnuts, acorns and roots. When the Normans prevented Saxon pannage by closing the forests to keep them just for hunting, they were condemning many families to starvation. The impression we get from Robin Hood movies is that it was being banned from hunting in the forest that the Saxons resented, but this was minor irritation compared to the life or death issue of the Normans preventing domestic pigs foraging in the forest. Not surprisingly the villagers’ right to pannage was bitterly contested right up to the reign of King John and with good reason.

Even in medieval towns, pigs would roam the streets feeding off the middens and market waste. There were attempts from time to time control this, but, after every crack down, the pigs would end up back on the streets. Officially, the only pigs which were allowed to forage freely in towns were St Antony’s pigs.

Around 1100, an Order of Hospitallers was founded at La Motte and named after St Antony of Egypt who died in 356. The mother house became a place of pilgrimage for those suffering from St Antony’s Fire which we know today as ergot poisoning. But the order soon spread. The Hospitallers, wearing distinctive black robes and the blue Tau (T-shaped cross), rode around ringing bells to collect alms. The pig was the saint’s emblem, because according to legend either St Antony was once a swineherd or a pig kept him company during his life as a hermit.

Householders would give the Hospitallers the runts of their litters, in exchange for their blessing for the health of the rest of their pigs. A runt became known as a tantony. These pigs were hung with a small bell, like their masters, and legally allowed to roam the streets of the towns being fattened by the scraps from the community. (Tantony also became the name given to the smallest bell in a peal.)


So important were pigs in the Middle Ages that many laws were brought in to safeguard the meat, for example, it was illegal to drive pigs using a holly stick because, being inflexible it could bruise the flesh, which then would not take up the salt when being cured.

Villagers’ cottages and byres were often built so low that a pig carcass was too long to hang from the beams, so in many villages, the bloody dripping pig carcasses were hung in the church porch after slaughter.

As well as being used to cover jars, the bladder of the pig was one of the earliest emergency pluming tools at a time when many pipes were wooden. It would be floated down the pipe to the site of the leak, then blown out to inflate and seal the bore hole. Centuries later, the pig’s bladder was used for the same purpose in the early days of gas pipes. 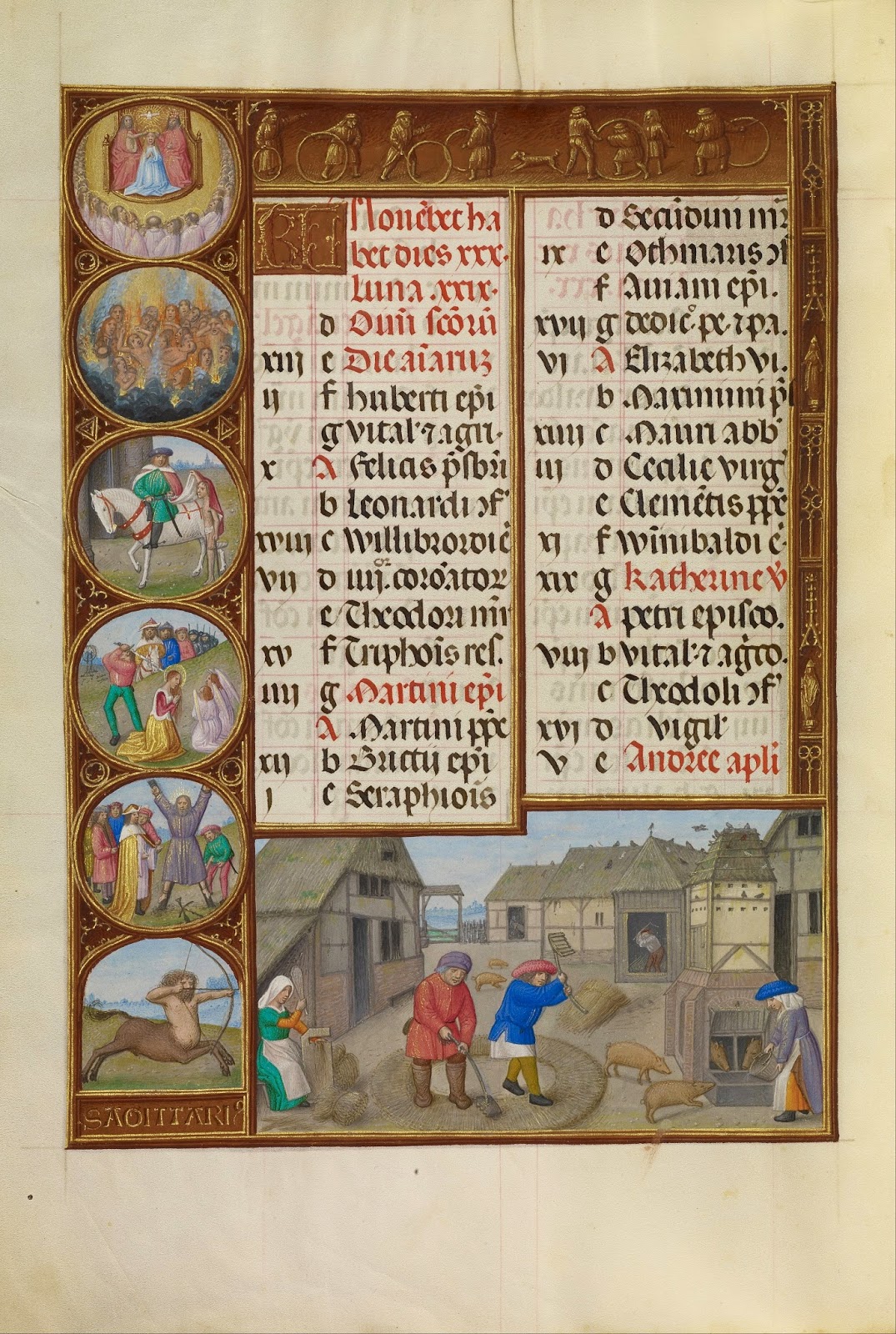 But to end with another tale of ghostly pigs – most of us are familiar with the legends of a hell-wain drawn by black horses and driven by a headless coachman being an omen of impending death. But in Durham, John Burrow was said to have been warned of his death when he saw a black coach drawn by six black pigs. Maybe the pigs were finally getting their own back.

Fascinating post, Karen. Down our way now, it is the wild boar that roam the streets freely and turn over the dustbins. I had never heard of piggy ghosts before. Thank you.

What a super post. Your posts always have such wonderful illustrations too!

Could the reason for ghostly pigs at New Year and demonic pigs dictating church sites be that the pig was the emblem of the Norse God Frey? There was a time of peace in his name over Yule.

Lovely post. I particuarly liked the detail about bruised pig's flesh not salting.

All absolutely fascinating. Is 'tunty pig' a corruption of Tantony, do you think? Did your family mean fat or not so fat, Susan? I was trying to work out where I first came across Tantony pigs and discovered it was 'Martin Pippin the the Daisy Field'. Must go back to that. Thank you.

The equipment used to clean modern oil and gas pipes are still called pigs. Large pigs containing sensors and computers for inspecting the pipelines from the inside are called intelligent pigs. In a fantastic case of nominative determinism I once met an engineer who worked for one of worlds leading pig designers and builders called Dave Bacon.

No wonder so many old church porches were off to the side and almost a separate wing!