'Intervene in the field of the imagination' by Lydia Syson

The idea that the Spanish Civil War was primarily a ‘poets’ war’, as Stephen Spender suggested, has often been questioned in the 75 years since it ended.  In terms of numbers, it was a workers’ war.  Now a remarkable exhibition and book explore for the first time the many different ways in which it was also an artists’ war.  In the process, Conscience and Conflict: British Artists and the Spanish Civil War, powerfully demonstrates that this is because it was, in fact, everybody’s war. 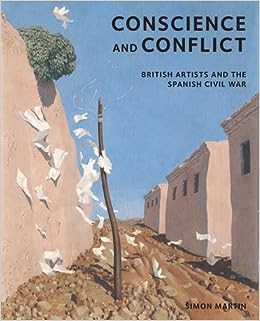 The juxtaposition of images in the first few pages of Simon Martin’s accompanying book makes this point particularly well. First there’s a semi-abstract Henry Moore lithograph of 1939 called ‘Spanish Prisoner’ - eyes, bars, barbed wire, monumental despair – which was imprisoned itself in Camberwell School of Art when WW2 broke out, so couldn’t be printed to raise funds for Spanish refugees in French detention camps as Moore intended.  Then this eye-catching and anonymous poster in yellow, red and purple with the simple plea: ‘Help Spain’.

Turning the page, I was struck by a 1936 photograph by Edith Tudor-Hart of the ‘Aid for Spain’ fundraiding shop in my own London Borough, Southwark, an image which documents the sheer scale of support for Republic Spain in Britain.  This shop was open till ten at night.  Its windows and door are plastered with exhortatory appeals: ‘Buy a tin of food! We will send it to Spain’, ‘Buy a milk token’, ‘Please step inside and see what Spain means to you’, and, in largest letters of all, ‘SPAIN IS FIGHTING FOR YOU’.

‘Unless he is prepared to see all thought pressed into one reactionary mould, by tyrannical dictatorships – to see the beginning of another set of dark ages – the artist is left with no choice but to help in the fight for the real establishment of Democracy against the menace of Dictatorships,’ wrote Moore, expressing the commitment of a generation.

Picasso’s Guernica, painted in the wake of the bombing of the Basque town in April 1937, has undoubtedly overshadowed the efforts of every other artist in this respect, including his own magnificent Weeping Woman, a highlight of this exhibition. But instead of attempting the impossible – unearthing British works of art to compete with Picasso’s – Conscience and Conflict takes a better path.  Both book and exhibition tell an exceptionally moving story of the vast, varied and often collective response both to events in Spain and to the arrival of the painting Guernica in Britain - it was seen by 3,000 people in the New Burlington Galleries and over 15,000 in Whitechapel. One of many sub-plots to this narrative is the democratising effect Spain had on British art in the 1930s.
Artistic engagement in this war took multiple forms.  Some turned their talents to propaganda images, making banners, hoardings, cartoons, book covers, posters.  Others sold their work to raise money and awareness, largely through the Artists International Association, whose history is particularly well told, and later the Spanish Artists Refugee Committee.  And like writers, artists took sides, in similar proportions. Pro-Francoist and more ambivalent artists are represented here too – works by Edward Burra and Wyndham Lewis stand out.

A few British artists chose to go to Spain to fight for the cause. Felicia Browne was the only British woman in combat, and the first British volunteer to die in battle. Her sketchbook, though not her body, was recovered and her work exhibited soon after her death to raise funds for the war effort.  I’ve never seen any work by sculptor Jason Gurney, whose posthumously published memoir Crusade in Spain was a very valuable source for A World Between Us: Gurney was wounded in the hand, and apparently unable to sculpt again.  Clive Branson returned, but only after imprisonment in the notorious Francoist camp of San Pedro de Cardeñ.  Branson’s colourful, realist paintings are well represented in this show, along with sketches he made in Spain of fellow prisoners. I thought of these when I was writing the Ebro scenes in my novel: Nat determines to take his drawings of his dead friend Bernie back to his wife in Mile End if he survives the battle. Branson was killed in action in Burma in 1944, where a disporportionate number of Communists and former International Brigaders seem to have been sent during World War Two. (My grandfather, a friend and comrade of Branson’s, broke his arm very badly in a training exercise the night before he was due to fly there himself, which probably saved his life.)
A photograph in the book from the International Brigade Archive at the Marx Memorial Library shows artist-turned-ambulance-driver Wogan Philips standing in front of the vehicle which inspired the opening of my chapter 10:

‘Felix stood on the dusty road, rereading the writing on the front of the ambulance and wishing she didn’t have to get back into it quite so soon.  She rolled the words round her tongue.
‘Medicamentos para los obreros de España.’
The letters were hand painted in white capitals, bold against dark green paintwork.  They got bigger and bigger until they reached the huge final ‘A’ of España. . .This was what she’d undertaken.  Medicine for the workers of Spain.’

'We’re all involved.  We can’t let the Blackshirts win in England, and we can’t let the Nationalists force their way into power here either.  It’s a fight for the only things really worth fighting for – everything I always used to take for granted, I suppose…like freedom, and elections, and being able to say what you think.  I can’t just close my eyes and pretend it’s not happning.  Fighting here is the only thing we can do right now to stop Fascist bombers flying over Lawrie Park Road next year, or the year after.'

When I started writing A World Between Us, I hadn’t quite realised how heavily involved in the Aid Spain movement my grandparents and other relatives had been.  Soon familiar names cropped up everywhere I looked.  I discovered a portrait of my mother, aged four, by Edith Tudor-Hart, whose genius for photographing children can be seen in this exhibition in images of ‘los niños’ – the young Basque refugee children who came to Britain on the Habaña in 1937.  In her hands, a camera was a political weapon.  According to Tudor-Hart, photography had ‘ceased to be an instrument for recording events and became a means for influencing and stimulating events.’ I have another picture of my mother by Ramsey and Muspratt, who took the extraordinary picture of John Cornford (with Ray Peters), also in Conscience and Conflict, that led so many to describe him as the ‘poster-boy’ of the International Brigades.
For obvious reasons, I loved the posters in this exhibition, many of which I knew already, but even more I loved the surprises: the terrifying Neville Chamberlain mask worn by Roland Penrose and others at the May Day procession to Hyde Park in 1938, and a papier-mâché horse's head from the Surrealist float; the haunting ruins and empty streets painted by John Armstrong (see book cover), who went on to become an official war artist  – scraps of paper blowing in the wind mimic human beings swept from their homes by war.  Perhaps most startling of all is the astonishing series of pictures of refugees on the road by Ursula McCannell, which she started painting when she was only thirteen.  As the Daily Mail pronounced after her first solo show, they ‘seem to typify all suffering in Spain.’

Lydia Syson's Liberty's Fire will be published on May 7th.  From October 2015, she will be an RLF Fellow at the Courtauld Institute of Art.
Posted by Lydia Syson at 00:02

I really enjoyed this post. Other than reading the usual writers, Laurie Lee etc, I have never looked at the Spanish Civil War from the point of view of British artists and I am really surprised to see that the support for the Republicans was so extensive in UK. I saw a wonderful exhibition in Madrid. It was the magazines, journals and poster work of the time but, of course, in Spanish.
And Guernica in Madrid. Magnificent. I spent an entire afternoon sitting in front of it. What a masterpiece.
Are there plans for this exhibition to run in London, do you know, Lydia?

This sounds like a really interesting exhibition, Lydia - wish I was a bit closer to Newcastle. Your post made me think of Joan Lingard's book, 'Trouble on Cable Street'. I don't know if you've come across it? It's about a girl of Spanish/English parentage, living in the East End in the 30s. One brother goes off to fight in the Spanish Civil War, while the other is drawn into Mosley's Blackshirts. Like your books, it finds a little-known corner to shine a light on.

I'm not aware of plans for the show to move to London, I'm afraid, but I'll let you know if I hear anything, Carol. But the book is fascinating, if expensive - worth ordering from your library?!

And yes, I hugely enjoyed the Joan Lingard which I had the pleasure of reading in MS. I've been a huge fan of hers since reading 'Across the Barricades' in my teens. Thoroughly recommend 'Trouble on Cable Street' particularly for slightly younger readers.