A new year by Mary Hoffman 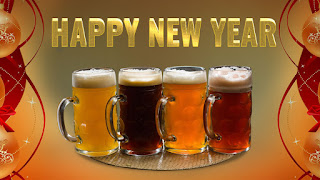 Reading Julie Summers' post a few days ago about New Year's Resolutions gave me pause for thought. I'm not a great maker of resolutions myself, though I remember making comprehensive lists of potential improvements as a child and young teenager. Perhaps I was a bit like Jane Austen's Emma, of whom Mr Knightley says:

"Emma has been meaning to read more ever since she was twelve years old. I have seen a great many lists of her drawing-up at various times of books that she meant to read regularly through--and very good lists they were--very well chosen, and very neatly arranged--sometimes alphabetically, and sometimes by some other rule. The list she drew up when only fourteen--I remember thinking it did her judgment so much credit, that I preserved it some time; and I dare say she may have made out a very good list now. But I have done with expecting any course of steady reading from Emma. She will never submit to any thing requiring industry and patience, and a subjection of the fancy to the understanding."

In other words, the making of a list is nothing if the tasks on the list are not carried out.

But today I want to think about the New Year rather than the resolutions.

I was recently writing about the moment when 1299 became 1300 and trying to think of what it might mean to a young girl in medieval Italy. She was the heroine of my new novel for Barrington Stoke, due out later this month and called Tilt: 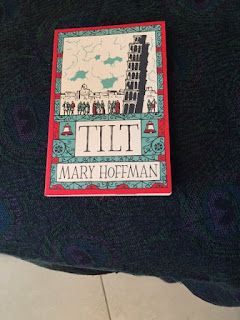 I was blithely putting myself in Netta's shoes, as the daughter of an architect and stonemason working on the bell tower for Pisa's cathedral, when I suddenly had to smack myself on the head and say "Doh!" Because of course Netta's new year did NOT begin on 1st January but on 25th March.

That is of course the date of the Annunciation of the angel Gabriel to Mary and in Italy THAT was when the year 1300 began, as it did for much of mainland Europe. It wasn't until 1521 that the new year in Tuscany began on the first day of January. And in England that change was not made until 1752.

(Yet Scotland adopted the new date in 1600 - could this be why the Scots are so attached to Hogmanay, since they've been celebrating it on the night before 1st January for over four hundred years?)

The Romans began their year in March too, without reference to the BVM. Hence September, October, November and December, named as the seventh, eighth, nine and tenth months respectively.*

Before it got its status as the year opener, 1st January was celebrated in the Gregorian calendar as the Circumcision and Naming of Christ, a minor festival which is still technically acknowledged on that date in the Anglican Church.

The tradition of showing the new year as a baby goes back a long way. This 16th century woodcut carries the Latin couplet:

(I am as new as Christ child born of a virgin pure,
Mortal, may your new year be just as happy and sure.) 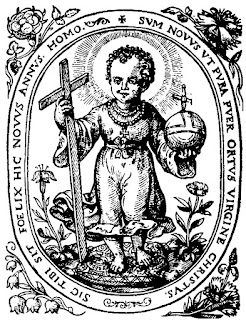 The child ages throughout the year, becoming as old as Father Time by the last day of December, ready to hand over to another new baby. Many images seem to equate Old Father Time with Death himself, since he comes with a scythe. 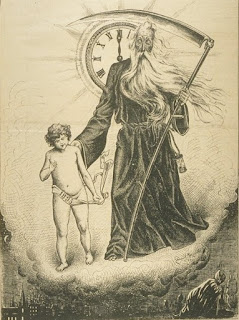 And you could be forgiven for thinking that 2016 has certainly reaped a rich harvest of souls, though statisticians tell us we are wrong about that. From David Bowie's unexpected death on January 10th to the passing of Debbie Reynolds on December 29th, the infant 2016 had to age very quickly.

January used to be called Lautomaand by the Dutch, meaning "frosty month" and was dubbed Nivose or "snow month" in the French Revolutionary calendar. Unless the weather changes quickly in my neck of the woods, I shall think of it as "fog month."

"Mist monath" might make the month seem a little more attractive; I gather many people hate January and regard it as 31 days to be endured.

I'm not one of them. I love new beginnings: first of the month, first month of the year, first day of term, first page of a new novel - to read or to write -  first birthdays of babies. And the turn of the year, which started with the winter solstice on 21st December, really gets going today.

The sol is invictus, even by the Oxfordshire fog.

A very happy New Year to all our readers and Followers around the world.

Great post, Mary! But I don't disagree with you. It's just that March was the beginning of the Roman year only until about 700 BC. At that time Numa Pompilius shunted the months January and February in before March. That's why by Ovid's day, the Roman new year was celebrated on the first of January (see Ovid's Fasti). That also explains why September, originally the seventh month (*septem* means "seven") is now the ninth, etc!

Glad you have cleared that up, Caroline!

Happy New Year to you too.