ON READING "THE WICKED BOY". By Penny Dolan 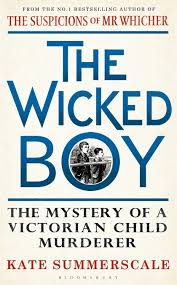 The Wicked Boy arrived as a Christmas gift. I was very glad to see him there by my armchair. I had noticed the tall “publicity piles” in Waterstones - and other outlets - and seen various reviews and articles published when Kate Summerscale’s title first appeared, and yet I was a little anxious.

My worries about how this “Mystery of A Victorian Child Murderer” would end was there from the earliest pages. Besieged by a dreary cold, I even put the book down for a while, fearing that bad events would only end worse.

A week later, I went back to the beginning and stared reading again. The Wicked Boy opens in July 1895, when thirteen-year-old Robert Coombes and his year-younger brother Nattie jaunt off to The Oval to watch a cricket match - after murdering their mother. With their father away at sea, the boys live a fantasy life for a week, aided by deceit and theft and a simple-minded family friend. How can this end in any way well, I thought?

The subject matter may be sensational but the account does not nip along. The amount of research demands patience reading, and a willingness to pause in one moment, whilst events or histories seemingly less relevant are expanded.

“Listen,” I imagined Kate Summerscale saying, “you need to know all this to appreciate just how it was in those times. You need to know more than just the boy.”

The Wicked Boy's world expands and unfolds far beyond the grisly events and the eventual trial. Summerscale’s research takes one through the geography and population of Plaistow and East London to where, beyond the rows of houses, open land still stretches down to the Thames. She guides us through the stench of the area, from the small local industries to the mighty London docks, where live cattle are loaded on to ships bound for America.

Summerscale brings is the brief testimonies of many involved in the awful event: the boy’s teachers, the pawnbroker, the family friends and Liverpool aunt, and we are introduced to the schools & institutions the boys occasionally attended. We half-meet the father, who hears of his sons arrests when he is docked in America but who cannot afford to abandon his work-passage back, and half-imagine what life the brothers led in the shadow of their excitable but apparently violent mother. 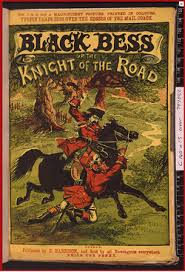 The press and public were particularly strident about the stack of a type of sensational magazine, known as Penny Bloods or Penny Dreadfuls, found in the house.

The Bloods fascinated Robert, and his indulgence in tales of vicious crimes and bold and often lawless adventure proved, for some, further evidence of the dangers of encouraging literacy in the working classes.

Later in the book, there is a closer analysis of such narratives, comparing these rough tales with the type of boy's adventure stories told in more respected books. In many way, the traits admired in the heroic protagonists are similar, except perhaps for their class in society - and the cost of the books themselves.

The two brothers certainly seem strange boys, but Nattie is judged too young to be guilty and called to give witness to his older brother’s crime. Robert’s behaviour in the dock is noted as odd – laughing, grimacing, unaware – and there are comments about the navy blazer edged with gold cord that he wears. The Coombes were a family that wanted to look respectable to other eyes.

What punishment would fit Robert's crime? Gradually light seeped through this grim situation, confounding my preconceptions. Robert is eventually judged too young to hang; he becomes the youngest inmate in an institution that can make press headlines even to this day. In September 1895, Robert entered Broadmoor, a fortified criminal metal asylum in Berkshire.

However, the asylum, especially Block 2 where Robert is placed after his admission period, is humane, built in "a pastoral setting . . that recalled "a lost innocence. . . both gaol and sanctuary". There is an orderly, kindly regime. Robert is taught tailoring, but reading books, playing musical instruments and work in the gardens are part of the experience and too. This calm but strict benevolence was totally at odds with what my ignorance was expecting and were a highlight - in many ways - of the book.

After seventeen years, in March 1912, Robert was released to the care of the Salvation Army colony at Hadleigh in Essex, and then sent to Australia. The era of transportation is over, but the young country still needs to be populated, even by persons advised to make a new life.

By this point in The Wicked Boy, I was reading hopefully. Many of the changes that marked the end of the 19th century had won through: universal education as a right, the formation of the NSPCC and banning of cruelty to children, a growth in understanding of madness, the treatment of prisoners and a belief in rehabilitation. Even if never perfectly practiced, some aspects of society had changed: the book was more than Robert’s story. It felt as if the Victorian’s better belief in “good works” had won through.

However, if one believes crime calls for karmic punishment, it arrives when Australia’s men sign up to fight for the mother country. Robert, an able musician, becomes a military bandsman, a role that sounds almost safe until one knows that bandsmen acted as the army’s unarmed stretcher-bearers, carrying the wounded and the dying through the field of battle. Robert Coombes survives the heat and disaster of the retreat at Gallipolli and goes on to endure the dreadful mud of Paschendale.

Although WWI seems familiar history, this section had a particular poignancy. Robert, the child who relished the bold and bloody yarns of those “Penny Dreadfuls” and imagined the drama of a childhood adventure, became, in a sorrowful way, the brave and stalwart hero he had once admired.

By now, I felt the book well worth a patient reading.

Then, just as the long account seems to be settling into a calm ending, Summerscale uncovers more: an unexpected ending which I will not spoil here, other than to say that, in a quiet way, it seems to vindicate the wisdom of those who treated the child Robert Coombes with kindness. Despite my earlier anxiety, THE WICKED BOY became a largely positive story, even though many of the arguments and complaints are still easily raised to this day.

It feels a book I need to return to, but right now, with the book closed, I keep thinking about a moment from the trial. 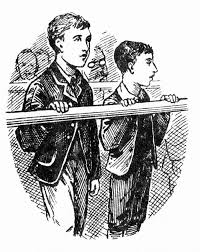 Was it the gold braid around young Robert Coombe’s neat navy blazer that swayed judgement at the trial?

If the Wicked Boy had not looked so noticeably keen to be clean and respectable, would his story have been different? And his life shorter?

And are such prejudices still there in public perceptions of young offenders now?

I don't think I would have bought this if I hadn't read your review - thnks, Penny!

Penny that book is sold!

The story was probably of extra interest because I'd spent my own childhood in London, although not in that particular area.

What a thought-provoking review, Penny.