Last Saturday, the 21st January 2017, I met up with a couple of friends alongside the Apollo Fountain  in the impressive Place Massena in Nice. We, along with about seventy others, were gathering to march. We were marching - each of us perhaps for slightly different reasons - against Donald Trump and Mike Pence's position on women's rights. At least, that was my principal reason for being there. Denial of climate change was another concern that fired me.
It was a beautiful day. The sun was shining. The world of the Côte d'Azur was going about its business. Yachts out on the water, bobbing in the warm afternoon.
All over the world crowds were gathering to voice their concerns. From Washington D.C the call was echoing. 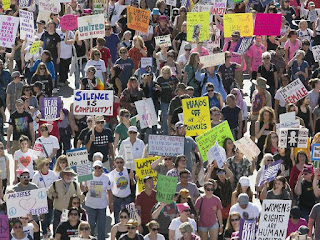 Ours was a very tiny group because no permit for a demonstration had been granted due to the atrocities that had occurred on Bastille Day last year, 14th July 2016, when a lone truck driver had ploughed his vehicle through the heart of  a crowd of people out in the streets celebrating our national  holiday and murdered more than eighty people including women and children.  France remains on high alert and a country in mourning. Joining demonstrations is perhaps not the wisest act at this time. Still, I believe, that we must continue as normal. We cannot allow ourselves to be restricted by fear or groups such as Daesh win.
A few friends advised me against joining the crowd last Saturday but I was determined and I am very glad that I made the effort. How many have since asked: 'But what was the point?' 'What were you marching for?' 'No democratic rights have been threatened.'

On Monday of this week, his first day in office, President Trump along with seven other MEN gathered together in the Oval Office. Those seven men watched on as Trump signed an executive order to reinstate the Global gag rule, which severely restricts funding for organisations that support or offer advice on pregnancy terminations no matter the circumstances.
This post is not about whether abortion is right or wrong. Each of us has our own conscience and opinions on this subject. But from my point of view, this signature on his first day, overlooked by his male colleagues, is an insult to all women. And I was even more certain that my Saturday afternoon walking in the sunshine with friends and strangers was not a waste of time.

I have penned several books in a very successful series published by Scholastic entitled My Story. Each is a diary written at a chosen point in history that recounts 'live' events through the eyes of an adolescent. Boys and girls are the witnesses, but in my case, I have chosen to tell each of these diary stories through the experience of a young girl. Two of the books - Twentieth Century Girl and Suffragette - published now as two stories of Edwardian England and titled Cadogan Square - are stories set at different stages of the women's suffrage movement: 1900 and 1909. 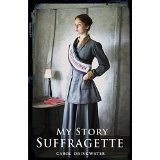 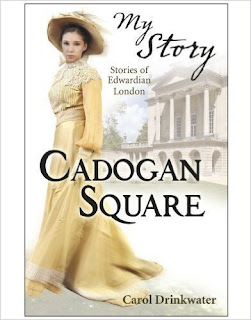 Women have been marching for their rights for over one hundred and fifty years. Women have endured imprisonment and force-feeding while standing up for what we believe is our place in this world.  We have marched for the right to vote, to qualify as medical or legal advisors, to gain degrees, to handle our own finances, to have the right to apply for a mortgage, to earn an equal wage alongside our male colleagues, to choose to take on the role of motherhood or not ...

I marched last Saturday because I cannot stand by silently and see any of what we have achieved be eroded. I live in a democracy, and thank heavens for that. Not all of us do. Our democracy gives me the right to raise my voice, to sound the alarm. To voice my opinion and to let all politicians know that we are paying attention. It is another form of a vote.  To remain silent, in my opinion, is a complicity.

Thank you for this post. As an American, I am astounded by our country's global impact on so many levels. I don't think many Americans realize the global reach the US has. I would love to hear more about how US culture/politics reaches you and affects you.

I marched in London, Carol, and quite agree that we must all carry on protesting.

Thank you Carol. This is such an important message.

Yes, one can never sit back and take our rights for granted. Great blog. I do think your objector was wrong; democratic rights are under threat everywhere, not just because of Trump either. Marine Le Pen? Good on you!

Your first paragraph about not letting crazy extremists win struck a chord with me in particular. I love that you called them Daesh instead of ISIS; they give all Muslims a bad name - especially in this climate of fear that Trump has done nothing but exacerbate - and the fact that people recognise that because there is NOTHING Islamic about them makes me incredibly happy. Thank you so much.

Well said, Carol! Thanks for posting.

Thank you for the post and for marching, those who ignore the past are condemned to repeat them, the hopes and fears of many were visible in the marches.

Yet again, a strong and searingly honest piece of writing from Carol Drinkwater. To sit on the fence over such important issues is to give consent. Every woman enjoying the benefits our ancestors marched and fought so hard for owes such a debt of gratitude. A woman's body is private property. It is not for others to comment on. Thank you Carol, and your small but significant group of marchers for making a difference.

Thanks for this reminder that history is the past, and the present, and the future.... which we would all like to be better.