Why the (Western) World loves an Extrovert, by Fay Bound Alberti

On New Year's Eve my friend and I sat in a busy venue, gently grumbling at all the bonhomie involved in the celebrations: strangers hugging, singing and optimistically making predictions for 2017. We were the obligatory introverts - the spectres at the feast, commenting on the party that was erupting around us, rather like Statler and Waldorf, those grumpy old men from the Muppets. 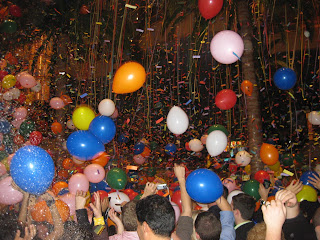 I thought a lot about introversion and extroversion over the festive period, and its social history. The overwhelming narrative of the season is the good humour and geniality of friends and family, and yes, strangers, in the spirit of man's humanity to man - though it always seems to be women who are landed with the practicalities. Those who are not swept up in the spirit are the Scrooges and the Grinches of the world, preferring their own company to that of others. The pressure on all of us to grab the hands of strangers for a rousing rendition of Auld Lang Syne is considerable.

So where does it come from, this association of introversion with hostility and unfriendliness? What got me thinking about this is the history of loneliness, a subject that I am researching for a forthcoming book. Today, loneliness seems to be an ever growing concern, variously linked to adolescent depression, middle-age suicide and elderly dementia. To be separated from society, the story goes, is to fail to function in it. Loneliness has become shorthand for a pathological isolation from the outside world, made all the more challenging by the rise of social media. Sites like FaceBook are said to encourage isolation at the same time as they make us more 'social' - lurking on social media websites and seeing everyone else leading apparently 'perfect' lives, leads to introspection and depression.

It is introverts who most commonly report, or are more willing to report being lonely, but the term introvert is itself a modern one,coined by the Swiss psychiatrist and psychoanalyst Carl Jung (pictured below) in 1921. At the time of Jung's research, many of our current working ideas about the self and society, emotions, the mind and the role of the individual were being formulated with the rise of the mind sciences. Scientific explanations for human personality and behaviour were being discussed, especially in relation to the structuring and working of the brain. 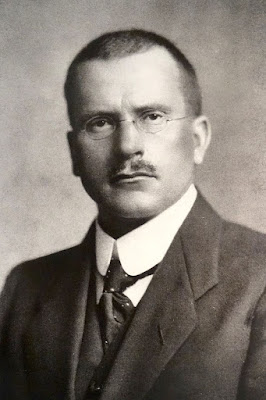 In the new mind sciences, extroversion was characteristic of talkative, outward-facing personalities who were energetic and enlivened by being around other people. By contrast, introversion was associated with isolation and reserve, and by the need to spend time alone. Most personality models in history since Jung have worked with this basic understanding of differences between extroverts and introverts. In 1962 Myers-Briggs created a workable model of Jung's theories (the Myers-Briggs Type Indicator or MBTI) which is still in common usage. Curious? There is even a free online test, adapted from Myers-Briggs that you can take at home.

The MBTI 'personality inventory' uses Extroversion and Introversion as one of its main categories of analysis. Despite changing models of psychology since the 1960s, concepts of introversion and extroversion continue to dominate, and have acquired a moral loading. Extroverts are generally seen to be open and agreeable, and introverts thoughtful as well as neurotic. The basic idea of personality (or temperament) types is not new; it has been around since the classical period. Following Galen, men and women were divided into melancholic, phlegmatic, choleric or sanguine individuals, depending on how much of a particular humour they possessed within their bodies. These differences are represented rather nicely below by the seventeenth-century painter Charles Le Brun's allegorical depiction of different personality types. 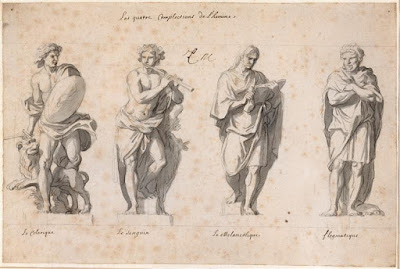 Today, there is more moral loading about different personalities, and the value of introversion and extroversion. In the Western world we place higher stock on being extroverted, as identified by Susan Cain in Quiet: The Power of Introverts in a World that Can't Stop Talking  Many organisations and institutions (I have worked for at least one) celebrate noise and activity over quietness and consideration. Introversion, despite its necessity in many of the creative arts, has acquired something of a pathology; shyness a failing. Why is this?

Part of this association (extroversion = good and introversion = bad) can be rooted in the social context of the psychological models that emerged after Jung. In the early twentieth century, European and American models of the self valued self-help, self-reliance, hard work and the rise of the individual. Being able to stand out, being willing to be vocal and outward-facing, being able to demonstrably lead others was a measure of success in presenting the self, as in business. On 21st century social media, vloggers like Zoella sell not only books and make up but a particularly modern form of aspirational extroversion that would have been unthinkable in an earlier time. 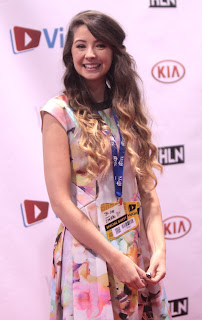 There are global differences in the desirability of extroversion. While it is taken as the norm in the UK and US, it has been argued, extroversion is less acceptable in traditionally social-orientated traditions of Japan and Buddhist cultures. Of course these are stereotypes, and differences are often surface, rather than core. But part of the reason for introversion in Buddhist cultures is the emphasis on looking inwards, in stillness and mindfulness, characteristics that arguably retain a different value in the West.

In the real world, of course, we need introverts just as much as extroverts. And most of us are neither entirely one thing or the other. It is common for each of us to feel introverted or extroverted at different times depending on our mood, company and environment. Extroversion is just one of the 'big five' that psychologists now use to measure personality and aptitudes. In addition to extroversion, the characteristics that matter are neuroticism (emotional stability); conscientiousness, agreeableness, and openness. The vast majority of people fit somewhere in the middle on most of these rankings. There are always exceptions. In a recent study, The Atlantic magazine found that Donald Trump, America's new President, scored extremely low on agreeableness and unusually high on extroversion: a 'combustible' combination whose effects have yet to be seen.
Posted by Fay Bound Alberti at 00:00