No idea why it would occur to me to recommend a documentary about an American charlatan to you fine people today. Just one of those things, I guess. 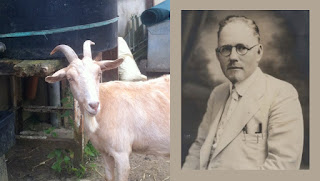 The documentary in question is 'Man of The People', an episode of the excellent podcast Reply All and is the very funny, shocking and rather disquieting story of John R. Brinkley (1885 - 1942) who claimed to be able to cure all sort of male maladies by a.... let us say 'intimate' operation, involving goat gonads.

His practice flourished, but he really hit the big time when he discovered a technology which allowed him to communicate, direct and unfiltered, with a huge number of people. Radio. I should also add that he achieved remarkable political success. He built a mansion with a two-story organ (as in the musical instrument) and apparently it's filled with special hiding places in which to stow your furs and jewels if the ravening hordes attack.

The episode is a great piece of storytelling, beginning as it does with an elderly lady in a decaying mansion and ending by returning there, the lady gone, the house restored and the man himself largely forgotten despite his desperate urge to write his name over everything in town.

A glance at Brinkley's wikipedia page shows that the programme makers aren't exaggerating when they say they didn't have the time to cover many of Brinkley's exploits, so I'll be watching the documentary and reading the book and pondering how easy it is to find oneself buying snakeoil.

You know, as one does.