BLASTS FROM THE PAST by Adèle Geras

When I typed  the names of everything I was going to write about  in this piece into the Labels section of the blog, I was warned that I had far too many letters. So I have cut it down by saying: evenings in the theatre. Which is what this post is about.

I had reason last year to realize that what was 'news' in my life was  'history' in the lives of my children and grandchildren. As my daughter and her family watched the wonderful series THE CROWN on Netflix, they were constantly amazed to learn that all this stuff was what was in my daily paper as I was growing up. I recall the Coronation vividly. I took sides over the Townsend /Margaret romance. I remember Churchill dying, George VI dying, and even though I don't go back as far as the Abdication, I do remember the whole of Elizabeth II's reign and have followed all the Royal doings as if they were a drama  I was both watching and participating in.

Then, I watched maybe the best programme on tv over Christmas, which was called WEST SIDE STORIES: the making of a classic.  This led me to remember all the amazing evenings I've had in the theatre, most of them a very long time ago, so I thought I would try and fix some of them here.

In 1955, I was 11  years old. Shortly after starting at my boarding school, my parents took me to see Valerie Hobson on stage as Anna in THE KING AND I with Herbert Lom as the King of Siam and my life-long love of musicals began.  I'd loved them before 1955, because I'd watched dozens of Hollywood musicals on film and many of the games I played with my friends involved reproducing  these in the bedrooms and living rooms of our non-Hollywood houses.  Still, to see a show live, to feel the unmatchable magic of the dimmed lights, the live orchestra, the shining satin of Anna's huge crinoline skirts, the children in their costumes, the sheer lavishness of everything in a London which was still mainly grey and austere, dazzled and entranced me. 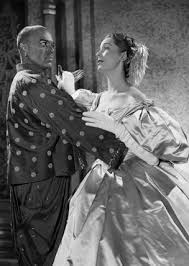 In 1958, WEST SIDE STORY and MY FAIR LADY were playing in the West End at the same time.  Julie Andrews was Eliza in the latter and I saw her. 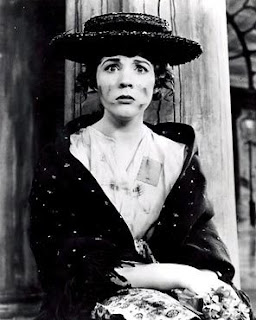 Now, I love Audrey Hepburn, (voiced by Marni Nixon,)  in the movie as much as anyone else,  but I can promise you that no one, ever, has been a better Eliza than Julie. She was passed over for the movie because her box office appeal (this is before The Sound of Music) was considered not hefty enough.

WEST SIDE STORY changed entirely what everyone thought of when they thought about musicals. Suddenly, there was drama and tragedy, and music as complex  as that of any opera on a stage that throbbed and vibrated with dancing of a kind that had never been seen on a stage before. This musical changed everything. I don't remember ever being as thrilled by something as I was by watching this, live from the second row of the stalls. It was tragic and funny. It was romantic. It was daring...they mentioned 'social diseases' and drugs and teenage misfits. Juvenile delinquents were suddenly the stars of a show. Also,  it was a version of  Shakespeare's ROMEO AND JULIET.   I fell in love then and I haven't fallen out of love, though perhaps (I've now seen it more times on  stage than I can count) it's time to allow directors to change something about the staging if they want to. I believe (and please put me right if you know different) that the staging is copyrighted and can't be changed. This is a mistake. I think WSS is now so firmly established, so much part of the canon that you can tinker with it a bit and it won't suffer.  The movie is great too, (though I have deep problems with Richard Beymer as Tony) but to see a red plush London theatre shaken to the foundations as those dances and songs erupted live...well, that was something I will treasure forever.  I have known every word of the lyrics since I was fourteen and sing them still in the privacy of my bathroom. I feel it's my show.

And now for something completely different. TROILUS and CRESSIDA  was a set play for my A-level. In 1961 Peter Hall directed a production set in a hexagonal sand pit. I've never forgotten that set, though details of the rest of the production have disappeared in the mists of time.  I can remember being very impressed with the way the sandpit resembled a kind of bullring and the Greeks and Romans fighting in the enclosed space was something that's affected how I think about war in general. I imagine them  taking place in just such a setting and the sand fits in neatly with the Middle East, which has been where recent wars have  been waged.

Shakespeare.  My most memorable experiences of seeing his plays on stage came over one single weekend in 1994. I took my younger daughter, who was 17,  to Stratford and we saw five plays while we were there. It may have been too much, but I loved every minute and we were very lucky indeed with our productions. My daughter didn't enjoy Alex Jennings in PEER GYNT at all but I adored it. We'd done the play at school (a shortened version as it turned out!) and Jennings was superb.  We were both overwhelmed by CORIOLANUS at the Swan and not just because Toby Stephens was completely beautiful.

It began with an avalanche of grain falling from a grain store on to the stage and we were right at the front - a moment of pure theatrical magic.  A MIDSUMMER NIGHT'S DREAM was heavenly. Titania lay about in an upside down umbrella piled high with satin and velvet cushions in shades of plum and lilac and pink. 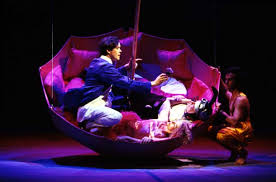 HENRY V, I'm ashamed to say, I don't remember nearly as well, but I can remember we both loved it.

Other highlights of my theatregoing: THE CHERRY ORCHARD at Stratford in 1995 with Penelope Wilton;  THE ASPERN PAPERS in about 1960 or so, 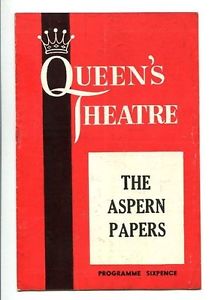 with Beatrix Lehmann in the lead; LE MISANTHROPE in French, on tour from the Comédie Française which had the whole cast in evening dress, designed by Pierre Cardin. I remember the ladies' dresses as looking something like this: 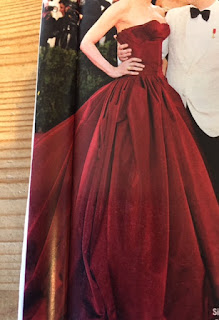 Nowadays, they film performances and on January 17th I'm going to see Simon Russell Beale as Prospero again. I saw him live at  Stratford in November and am going in order to be entranced all over again.  That's  what good theatre does: cast a spell that lasts a whole lifetime. 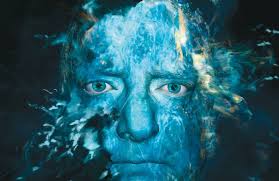 What wonderful memories! I have some lovely memories of stage shows from my teens, because a child seat in the gods at a musical was within the average child's pocket money means. Not any more! :( I'm pleased to say, though, that Julie Andrews has directed a production of My Fair Lady that I will be seeing later this year at the Regent, a wonderful old Melbourne theatre. She is amazing, isn't she? Actually, that may be the year she won the Oscar for Mary Poppins. If she'd had My Fair Lady she would have missed out.

I've seen a few shows in London, when visiting England. On my first visit I saw five productions, including a musical(Pal Joey, with Sian Phillips) and a pantomime, Dick Whittington, with Clive Dunn and Molly Sugden. On my second visit, I saw the RSC at the Barbican in Measure For Measure, and Evita.

Lucky you, anyway, for having all those options!

Oh, that feeling of being 'ancient' that comes when our lives start to feature in younger persons history lessons! But your lovely descriptions are inspiring to see that feeling in a different light - thank you!
(p.s. The Tempest is on at the cinema here on 11th - have you got the date right? Just don't want you to miss it!! :-) xx )

Thanks Ros.....it's on on the 11th in the evening and repeated on 17th at lunchtime....
Thanks for your comment too,Sue!

My own love of Shakespeare comes from being taken as a school pupil in the early 80's and 'forced' to see three plays live at Stratford. My whole world changed in the space of those three plays, the sheer life, needyness, the whole passionate nature of them changed how I saw words, and the plays, and many other since then. years later I went back and repeated the experience and saw three more live plays in Stratford. I then spent 4 years as a student in London where I discovered 'plays' were just as good the ones in Stratford, and seeing King Lear in west London in a black box production still makes my heart sing in memory. I saw many plays of these 4 years, almost monthly and widened my whole world. Live is by far the best!

Speaking of school excursions,my class was taken to see Judi Dench as Hermione and Perdita in The Winter's Tale when the RSC was on tour, she's playing Paulina these days, pity I missed that live filming!

Thanks for the memories, Adele: of the history we've lived through and the theatre we've seen!

I think I've said this before on this blog, but Judi Dench was a star of my younger life, when she was part of the Nottingham Playhouse Company. But I also remember Paul Schofield in Uncle Vanya - and, when I was still quite young, maybe 9? being taken to Stratford to see Much Ado about Nothing. I don't know who was in it, though. I also, once my brother got into Kendal Grammar School's annual play, began to see him playing alongside David Starkey, Starkey as Becket in Murder in the Cathedral and also as John/Ernest Worthing in The Importance of being Ernest. I think he was better in the latter role. Also once saw Rowan Williams (later Archbishop of Canterbury) playing Thomas More in A Man for all Seasons in New College garden. He was good.