Love and Ambition in the Arctic by Stef Penney

Continuing our cold theme, our guest for January is Stef Penney.

Stef Penney grew up in Edinburgh. She is a screenwriter and the author of three novels: The Tenderness of Wolves (2006), The Invisible Ones (2011), and Under a Pole Star (2016). She has also written extensively for radio, including adaptations of Moby-Dick, The Worst Journey in the World, and, mostly recently, a third instalment of Peter O’Donnell’s Modesty Blaise series.

The Tenderness of Wolves won Costa Book of the Year, Theakston’s Crime Novel of the Year, and was translated into thirty languages. It has just been re-issued in a 10th anniversary edition. http://www.stefpenney.co.uk

Here Stef is talking about her new book with Charlotte Wightwick

Charlotte Wightwick: Tell us about your new novel, Under A Pole Star. 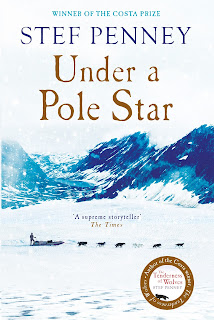 Stef Penney: Flora Mackie first crosses the Arctic Circle at the age of twelve. As a young scientist in the 1890s, she confounds expectations to become leader of an expedition to North-West Greenland, where she encounters rival American explorers Lester Armitage and Jakob de Beyn. All three become obsessed with the north: for Flora it is her real home; for Armitage it is a theatre for his ambition; for de Beyn, a place of escape. Their paths cross many times over the next decade, changing their lives for ever. It began as a book about ambition, but I think it’s ended up as a love story.

CW: Were you inspired by any real-life explorers or incidents when developing her character? What about the other characters in the book?

SP: There were no women arctic explorers at the time (the first was in the late 1920s), but there were a few female mountaineers, and a handful of women, like Isabella Bird, who made extraordinary solo journeys. But the High Arctic was (and still is) a very hard place to get to, logistically; an expedition there involved massive expenditure, specially chartered ships, tons of equipment, and a lot of time. Unless you were fantastically wealthy, you had to be able to sell yourself as the right man for the job. So Flora has to overcome many obstacles – some through her choices, some by fate – before she becomes the leader of an expedition. She has to be quite unusual to surmount all those difficulties, but once I decided she was the daughter of a Dundee whaling captain who had spent much of her childhood in Greenland, this almost impossible thing began to work... 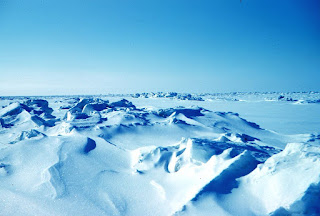 With the other characters, I was inspired by historical explorers, although neither is closely based on any one figure. The accounts of Frederick Cook and Robert Peary, and the controversy about who reached the North Pole first, or at all, got me thinking about what sort of people explorers are, and why they might lie. At first, I was overwhelmed by that story. They were extraordinary personalities – not just the unfathomable Cook and the incredibly dislikeable Peary, but Peary’s wife Jo (also dislikable) who joined him on a couple of expeditions as a non-active member, and Matthew Henson, his African-American servant, who went everywhere he went, but who was ignored by Peary, and the public, after their final trip. Theirs was a story you couldn’t make up – except they did.

CW: ​Love and ambition are two of the key emotional themes in the book - how do these play out in your characters and what were the key issues you wanted to explore here?

SP: I’m fascinated by the idea of ambition – particularly the point where it tips over from driving a person to achieve a goal, to driving them to lie – or worse – to reap the rewards that goal brings. The love story evolved later, but it became, perhaps, more important in the end. I don’t really think in terms of issues, so I don’t know that I intended to explore anything in particular, other than the collision of those particular characters, in that particular place. 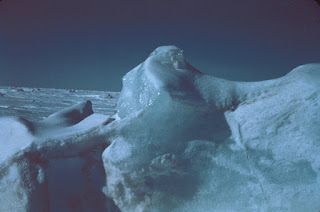 I suppose one thing that emerges is the way Flora holds onto her self and her autonomy under the onslaughts of the time – society, cultural expectations, biology, and indeed, love. Another thing that came to concern me very much is the way that sex is portrayed in fiction. I didn’t set out to write an explicit love story, but as writing progressed, I came to feel that not to precisely describe the affair between the two main characters would be a cop-out (no pun intended!). I’m a pedant; I get annoyed by love scenes where you’re left with questions like, Sorry, did she have an orgasm? How? What were they using for contraception? (Particularly pertinent, perhaps, in historical fiction.) And if you’re writing about the difference between good, bad and indifferent sex – well, it seems to me you have to be specific.

CW: The book tackles a number of serious subjects, including for example the impacts of colonisation and what that meant for the lives of indigenous people - can you say a little about these?

SP: It’s hard to avoid such things in writing about Arctic exploration. It’s also what makes it, for me, more fascinating than the Antarctic, where explorers could continue to behave in their own cultural bubble without anyone challenging them. The parts of the book most closely modeled on history are the various trials the Inuit characters suffer at the hands of explorers. Although there was nothing in Greenland to compare with the genocide in, for example, Tasmania, (because the land was commercially unexploitable), horrific things occurred: some accidental, like the fatality of unfamiliar diseases, and some that sprang from the explorers’ sense of white supremacy. Though some explorers in the book, as in history, are more insensitive than others, no one comes out of it with completely clean hands. 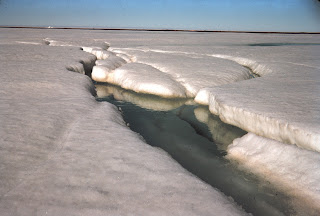 CW: This isn't the first time you've written about northern, unforgiving settings ( your first book, The Tenderness of Wolves was set in Canada) - what is it do you think that draws you to write about such landscapes? 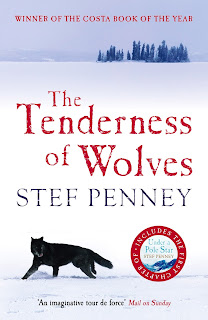 SP: I don’t seem to be able to stay away from them for long. Some people are drawn to deserts – for me, it’s the north. Perhaps because it’s close to the Scottish landscapes of my childhood. We spent all our holidays in the Highlands or on the North-West coast, and there’s something about bleak, rugged landscape that gets into your bones. And that’s even before you get to the ice and snow – it’s beautiful yet deadly; it’s ephemeral and transformative, it both conceals and reveals... Such hostile surroundings force people to reveal themselves, too. Two of the things I most enjoyed writing were my vision of Eden, which had to be a northern place; and being inside a glacier: something truly extraordinary.
Posted by Mary Hoffman at 00:02