'Take a Peck of Pickled Ploughmen' by Karen Maitland 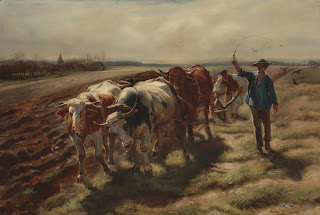 Today, the 8th January, is Plough Sunday, which is always the first Sunday after the 6th January. The 6th was the Twelfth Night of the Christmas and the end of the holiday. From Medieval times, right up until the introduction of farm machinery and tractors, Plough Sunday was an important religious feast day in the countryside, taking place before the bawdy and riotous Plough Monday which celebrated the return to work on the farm.

On Plough Sunday, decorated ploughs would be dragged up to the altars of the churches and even cathedrals to be blessed, and the names of every farm in the parish would be read aloud by the priest, so that they too would be blessed and produce a good harvest in the coming year, for everyone’s life depended on that. The plough was the symbol of life, peace and prosperity. As the old verse says –

"The king he govern all, the parson pray for all, the lawyer plead for all, but the ploughman pay for all and feed all."

Although Plough Sunday marked the men’s return to work on the farm and the craftsmen to their workshops, it did not mark the beginning of the ploughing season, but rather the end of it. In the Middle Ages, farmers knew that all the plough work on the farm should be completed before Christmas for the weather usually worsened in January. So, when the last furrow was ploughed before the Twelve Days of Christmas, the plough brist , (the breast or mould-board) would be polished and the shares cleaned and oiled ready for the plough to be stored in a barn.

There would always be a piece of land left unploughed in the community known as Jack’s Land or Jack’s Green or in Scotland Gudeman’s Fauld (Goodman’s fold). It was left as kind of sop to the Devil or the spirits, so that they had a piece of land which they could inhabit. If greedy humans took all the land, then the spirits would have no abode and would wander across the farms, wreaking havoc on all the ploughed land and making the ground barren. The corpses of those who had been refused burial in consecrated ground, such as suicides or those who'd been excommunicated, were often buried on this land.

Things became a little more rowdy on Plough Monday when the plough men and boys would pin ribbons and trailing rags to their clothes to make a shaggy coat. In some villages, particularly if the ceremony took place at dusk, the lads would blacken their faces and turn their coats inside out. (Wearing clothes turned inside out was an ancient charm to ward off evil and malicious spirits and also to reverse a run of bad luck.) Then the plough men and boys would drag a plough around the village, demanding money or food such as chickens and hams, and ale or cider from each householder, which they would consume in a great feast later that night.

If payment was not forthcoming, the householder's front garden would be ‘jagged’, that is ploughed up and ruined, especially the part in front of the cottage door, so that for weeks afterwards the stingy householder would be wading through deep mud to get in or out of their house. It would also be a very visible sign to all their neighbours of their lack of community spirit.

The leader of the plough men wore a costume which varied from village to village, but usually incorporated an ox tail because oxen generally pulled the plough. Often, the man would dress in drag as a comic woman known as a Bessie. As they processed the men danced and leaped as high as they could, the idea being that the grain would grow as high and as vigorously as they had leaped that year. So, it was in everyone’s interest to encourage the dancers. This tradition is known at least as far back as Saxon times and versions of it are probably as old as the invention of the plough itself.

The mummers in the village often performed Plough Plays on Plough Monday, which had nothing to do with farming, but were merely an excuse for mock battles which often degenerated into real and bloody fights egged on by an audience who had already drunk a great deal. The plays had no plots but were simply an array of bizarre characters who introduced themselves to the audience and fought each other. Probably, the mummers would have made mocking references to well-known people in the community or authority figures. The culmination of the play came when characters such as Pickled Herring and Pepper Breeches gathered around the man playing the fool. They’d make an interlocking circle of blades around his neck with six mock swords and pretend to kill him. He’d feign death and then immediately jump up and leap about, showing he was alive. This had echoes of the ancient pre-Christian fertility ceremonies performed during winter months in which the green god was ritually slain and then resurrected to bring about the return of spring and new growth.

In some villages, it was the tradition to force the man playing fool onto a bonfire of green or wet wood, setting fire to it and to the fool’s trailing rags on his costume in a mock burning. The idea was to produce lots of smoke on the bonfire so that the fool would appear to be consumed on the pyre, but could leap off ‘unharmed.’ But I can’t help thinking that quite a few fools over centuries probably were harmed in the making of these plays, even if it was just from smoke inhalation. 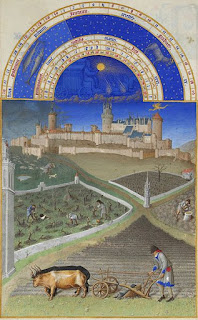 But since this is the end of the Christmas feasting and all your crackers have now been pulled, perhaps I should sign off with a very traditional medieval riddle –

Riddle - "How many hoof prints does an ox leave in the last furrow when it has ploughed all day?"

Answer – "None, because the plough is dragged behind the ox and so all hoof prints are obliterated."

Thanks, Karen for such an interesting post. I'd never heard of Plough Sunday or Monday before. Your description brought it all to life!

Fascinating post, Karen! I wonder if many communities still do similar things? I see there's a tractor in one of your pictures. Traditions are hard to push down. One day I was talking to my class about traditional football games on Pancake Tuesday and one of my boys, a keen footballer, said, "Oh, we do that at my church."