With the proliferation of historical drama now available on our small screens, you might think we’d be suffering from costume overload. But dramatists and filmmakers are still turning to the past for inspiration and viewers continue to lap it up (good news for us History Girls!). In 2017 we can expect the return of several lavish TV productions, The Last Kingdom, Peaky Blinders, The Crown, Versailles and Poldark to name a few, plus several promising offerings from across the pond that will doubtless make their way onto Netflix and Amazon. Here are a few that I’ll be adding to my watch list this year.

Taboo
Stephen Knight, creator of Peaky Blinders, has made quite a name for himself as the go-to man for period pieces with an alternative slant. This new series is the brainchild and long-cherished project of Tom Hardy and his dad, Chips. After previous successful collaborations, Knight must have seemed an obvious choice to pen Hardy’s creative vision. Set in London in 1814, Taboo centres on James Delaney, played by Hardy, who returns to England from Africa following his father’s mysterious death, only to find himself mired in conspiracy and intrigue. It’s a dark, visceral take on the 18th century, the machinations of the East India Company and the burgeoning British Empire. This one is right up my street. Currently airing on FX in the US and BBC1 in the UK. 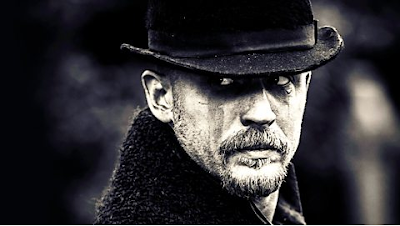 The Halcyon
Described as ‘Downton in a hotel’ this is ITV’s latest attempt to fill the gap left by the departure of Julian Fellowes and the Crawley family. The Halcyon is set in a glamorous five star hotel at the centre of London society during the Second World War. Beginning in 1940, we’re promised intrigue, politics, romance, gorgeous sets and a period soundtrack (with original songs supplied by Jamie Callum). There’s some excellent acting talent to prop it up too. Olivia Williams and Steven Mackintosh usually raise the bar of anything they’re in. I haven’t watched yet but early reviews are good and I’m sure I’ll drool over the costumes.

Harlots
Harlots follows the fortunes of two rival brothel owners in 18th century London. With a great cast (Samantha Morton and Lesley Manville play the madams in question) this show promises a female perspective on the oldest trade, and boasts an all-female writing and producing team. The series takes its inspiration from 'Harris’s List of Covent Garden Ladies,' the popular Georgian directory of prostitutes published from 1757-95, with the drama apparently based on the stories of real women. It’s a great premise and I hope it’ll deliver, though judging by the trailer, I have my doubts. It’ll be streaming on Hulu and airing on ITV Encore in the UK from 29 March. 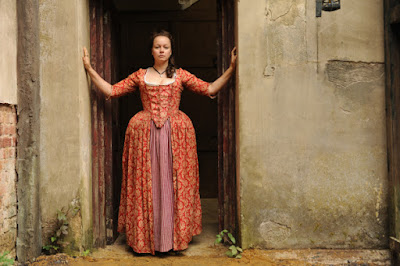 Alias Grace
Based on the Margaret Atwood novel of the same name, this show dramatises the real life case of Grace Marks, an Irish immigrant in Canada who, along with stable hand James McDermott, was convicted of the brutal murder of their employer, Thomas Kinnear, and his housekeeper, Nancy Montgomery, in 1843. James was hanged while Grace was sentenced to life imprisonment, becoming one of the most enigmatic and notorious women of the 1840s. With such great material, some big names involved, and a Netflix budget, this one should be good. Broadcasting in Canada on CBC and streaming globally on Netflix sometime later this year.

Jamestown
Set in 1619, Jamestown follows the first English settlers as they establish a community in the New World. As with Harlots above, the tale will be told, at least in part, from a female perspective, by 'three spirited women from England'. Written by Bill Gallagher and produced by the people behind Downton Abbey, the teaser trailer doesn’t give much away, but I’m predicting a smattering of ripped bodices and some accusations of witchcraft, along the lines of the ill-fated Jimmy McGovern show Banished. I hope I’m wrong. It’ll premier on Sky 1 but there’s no release date yet. 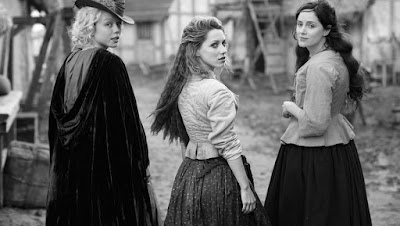 The White Princess
The BBC chose not to option this follow up to Philippa Gregory’s The White Queen, but US channel Starz went ahead anyway, with some of the same production team and Gregory on board as Executive Producer. The White Princess concludes the story of the Wars of the Roses and charts the rise of the House of Tudor through the marriage between Princess Elizabeth of York and King Henry Tudor. The reception to The White Queen was lukewarm and it’s unclear right now when this’ll come to air, or which service might pick it up outside the US, but it was filmed in the UK in 2016 so we can expect it at some point this year.

Britannia
Penned by Jez Butterworth, Britannia charts the Roman invasion of what would become Great Britain in 43 A.D. and the rise of iconic female warrior Boudicca. According to the Radio Times, ‘in this dramatisation, the Celtic lands the Romans invade are ruled by warrior women and powerful druids who claim to channel the forces of the underworld.’ With a great cast – David Morrissey, Zoe Wanamaker and Kelly Reilly all feature – and an unusual period setting, this one will be worth a look. It’s unconfirmed when or where this Sky/Amazon co-production will air but it’s slated for some time in 2017. 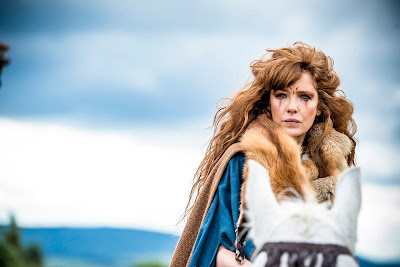 This is great, Katherine. I'd love to read your reviews of some of them in the next month or two. Personally I'm excited about Britannia. BTW, my fave historical drama of last year was The Crown!

Thank you! I'm sure I'll review some for Historia magazine! I think Britannia looks good. And the The Crown surpassed my expectations so I'm sure I'll continue with that.

Fantastic post, Katherine. Thank you so much for sharing it with us.

I'm intrigued by Britannia. Zoe Wanamaker? Yes, sounds good! Last time I saw a show about Boudicca the role was played by Sian Phillips of I, Claudius fame and I think Zoe W is the closest we have to Sian Phillips nowadays.

The series takes its inspiration from 'Harris’s List of Covent Garden Ladies,' the popular Georgian directory of prostitutes published from 1757-95, with the drama apparently based on the stories of real women.

I came across while watching movies. .Thanks for sharing..^__^..I will tell my sister and friends about your blog...pls continue to
write an article...I'm looking forward for the upcoming posts you will be posting

want to watch american and korean tv series and movies?

Any Idea Where to watch movies online?
In these days , you can Watch movie online for free without ads and payment needed.

I know we love to Watch movies online even

American Tv Series . I don't know if you are also fond of watching

Korean Tv series . My name is cielo I am a movie and tv series lover

"is now Trending"
for more trending news try to visit "