Stories from Japan by Lesley Downer

‘Please allow me to introduce myself ...’ as the Devil said in the Rolling Stones’ song ...
There’s a phrase in Japanese: jiko shokai. It means ‘self introduction’ and it’s what you do when you meet a person or a group for the first time.
You step forward, bow and present your business card, holding it with both hands with thumb and forefinger at the top two corners, turned so that your new acquaintance can conveniently read it, and say, ‘My name is Lesley Downer (or whatever). How do you do?’ You then take your new acquaintance’s business card with both hands with suitable respect and read it carefully (as opposed to stuffing it in your pocket).
Opposing armies of samurai used to introduce themselves before they went into battle. It was called nanori - ‘name announcing.’ The warriors would step forward and yell out their name, lineage, exploits and the exploits of their ancestors to make sure that they were only fighting adversaries of suitable reputation and stature.
In 1274 when Kublai Khan sent an Armada of 4000 ships to Hakata Bay in the southern island of Kyushu, determined to conquer the country, the samurai who confronted the army of Mongols on the beach did exactly that. But they soon discovered that the invaders didn’t have such exquisite manners when they cut them down mid-speech. The Mongols might have overrun Japan when they arrived again in 1281 to finish off the job if it hadn’t been for the Japanese gods who sent a divine wind - kami kaze - that dashed the Mongol ships on the rocks and destroyed their entire fleet.

This is my first regular post for The History Girls blog so I shall introduce myself. A lot of my posts - though not all - will have to do with Japan and I’d like to explain why.
For me the seed was planted more than thirty years ago when I read Bernard Leach’s A Potter’s Book. In it he wrote of the Japanese aesthetic approach to life. In Britain, identical-sized pots by a particular craft potter all cost the same. In Japan you can have ten very similar pots, all of exactly the same size. Nine will be priced at - say - Y5,000 (just under £35). One will be just a tiny bit different - often not obvious to the untrained eye. Perhaps it’s a little uneven, a little off centre. Or perhaps something will have happened in the firing. The glaze will be a little different, maybe there’ll be an unexpected flash of colour, what looks like a flaw that to the Japanese eye gives it beauty. That pot will be priced at Y50,000 or even Y500,000.
The western potter, conversely, strives to make all pots perfectly centred and perfectly round with no variation. As a famous senryu (satirical short poem) puts it:
‘Western food -
Every damn plate
Is round!’


At the time that I read Leach’s book I was teaching English to foreign students in Oxford. One, Yoshi, was Japanese. As a first step I asked him to teach me the language.
I also bought the Penguin Anthology of Japanese Literature. I’d recommend it to this day to anyone who has the smallest interest in Japan and its culture.
I began at page 1 and read through to the end. It took me on a wild journey, introduced me to people on the other side of the planet who had lived life to the hilt, some more than a thousand years ago.
I read of Ono no Komachi, the most beautiful woman who ever lived. Like Helen of Troy or Cleopatra she became the emblem of beauty. Men were willing to die for her. One commander of the imperial guard was desperate to have her as his own. To prove his love she ordered him to come to her house for a hundred nights and sleep outside on the bench used to support the shafts of her chariot before she would even consider his suit. All through that freezing winter he did so. When the morning of the hundredth day came round she went out to offer herself to him as his reward. But he was dead. He had died in the night.
For her hardheartedness she suffered the most terrible punishment of all - the loss of her beauty. She lived to be a hundred years old and in Noh plays is portrayed not as a beauty but a crone, forever bewailing her fate.
Komachi really lived and wrote passionate, complex poems. Just as the monks of Wessex were beginning to set down the Anglo-Saxon Chronicle, as the Vikings were sacking Paris in 845, 100 years before Beowulf was written, she was composing poems like this (in Donald Keene’s wonderful translation in the Penguin Anthology):
‘This night of no moon
There is no way to meet him.
I rise in longing -
My breath pounds, a leaping flame,
My heart is consumed in fire.’


Ariwara no Narihira, famous as a great lover and poet, lived around the same time. A nobleman of - naturally - peerless beauty, he was banished from the capital, Kyoto, because he had violated the Vestal Virgin. He travelled through the wilds of eastern Japan, past Mount Fuji and the uninhabited plains around what is now Tokyo, breaking hearts and writing sublime poetry. It was said that while other men are picky, he slept with everyone.
The Tale of Genji, the world’s first novel, came a little later. It was written by a court lady around 1008, before the Battle of Hastings. I’d expected such a famous classic to be a tough read but, at least in translation, it was utterly enthralling. I fell in love with Genji, the central characters, a handsome, roguish, charismatic, badly-behaved prince. Genji was not in the slightest like Beowulf or The Canterbury Tales (written 300 years later). It was all about relationships and feelings, closer to Jane Austen, the Brontes or George Eliot.
And so I read on through the centuries - of samurai armies battling, of a hero who led his band of warriors straight down a vertical cliff face to attack the enemy camped on the beach and how that enemy - including the baby emperor - fled into the water and were drowned, which is why the crabs’ shells there look like samurai helmets to this day. I wept at the fate of doomed lovers, was gripped by tales of love suicide, laughed at the outrageous Tristram Shandy-like antics of a pair of ne’er-do-well nineteenth century vagabonds, and found Basho’s profound and pithy haiku resonating in my mind.


I simply had to go there - see the beach where Atsumori played his flute, the hillside where Basho sat down on his straw hat and wept. Yoshi, my Japanese teacher, warned me that behind every temple there was a factory but I paid no attention. I found myself a job in Japan and off I went.
Over the years I’ve visited all these places and many more. My reading of Japan’s wonderful literature colours everything I see there. Of course Yoshi was right. There are lots of factories, industrial zones and cities of skyscrapers. But even though the country has changed you can still visit the place where the samurai warriors encountered the Mongols on the beach. (In fact underwater archaeologists have found a couple of sunken Mongol ships). You can still imagine how it was back in the days when the commander of the guard spent his last fateful night on the bench outside Ono no Komachi’s house.
I also began to write. While I’m not in Japan so much these days, I spend much of my time imagining myself back there - not in the glamorous Tokyo of skyscrapers and neon (which I also know and love) but in the nineteenth century, as Japan was on the cusp of enormous change. This is what I write about in my latest novel, The Shogun’s Queen. I hope I’ll have the chance to take you with me. 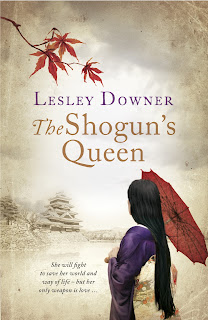 Thank you. I look forward to reading more of your posts.

Oh I have never heard of Genji,I will be looking for this to read :-) and I am enjoying The Shogun Queen, thank you.