Cowboys and Indians by Katherine Webb

Yesterday, I finished reading Sebastian Barry's Days Without End, one of the books I was given for Christmas. It is simply breathtaking. The book recently won the Costa Novel of the Year award, and I hope it goes on to win the overall Book of the Year prize too. Every now and then, a historical novel comes along that picks you up and drops you down right in the past, like a perfect magic spell, so that reading it is like being there. Hilary Mantel did it with Wolf Hall; Andrew Miller did it with Pure, and Sebastian Barry does it with this book. 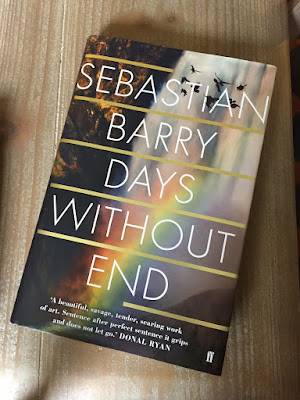 By chance, Barry's setting is one I've long been interested in: The American frontier in the nineteenth century - the 'Wild West', as myth would have it. And what a culture of myth and legend there is, surrounding that extraordinary period. The relentless pursuit of land and better fortune by early European settlers on that continent provides a truly astonishing chapter in the book of human history - but of course it came at immense cost to the indigenous population. I find it hard to read about the shoddy treatment of the American Indians by the settlers without my blood boiling at the injustice of it all. But more of that in a moment.

I heartily recommend Barry's new novel to you all, whether you're interested in the history of the USA or not. Whilst his magic trick of sending the reader back in time is one I wish I could emulate with my own fiction, the book is a treasure trove for readers, regardless. There are jewels of prose on every page. To prove it, I am going to open the book at random now, and quote a sentence or two:

'Third day a big thunder storm and it only a huge song singing of our distress. Hard to get the darkness out of your head. Full ten thousand acres of dark blue and black clouds and lightning flinging its sharp yellow paint across the woods and the violent shout and clamour of the thunder. Then a thick deluge to speak of coming death.'

Stunning. Our narrator is Tom McNulty, a young Irish man driven to emigrate by the famine in Ireland, and his narrative describes his life as soldier and settler in the Indian Wars and the American Civil War in the third quarter of the nineteenth century. Previously it had been easy for me, when reading about the actions of soldiers and officials in the Indian Wars, to condemn their brutality as a symptom of the racism and greed of a previous generation. Barry's book, however, says important things about what can happen, and what a man will do, if he is made worthless to society, if he has no stake, and no chance of betterment. It says important things about the human heart -  its capacity for love and tenderness as well as the damage done to it by violence and fear. It is an astonishing feat of fiction writing, and brilliant bit of myth-busting for anybody whose mental image of American history comes from Hollywood films. 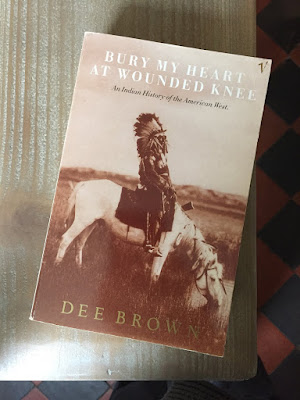 As I mentioned, I have been interested in early American history for quite some time. I even had a stab at writing about it myself, in my first novel The Legacy, which featured a greenhorn New York girl getting married to a rancher and moving to Oklahoma Territory in the early years of the twentieth century - and all the many and lastingly devastating ways in which she does not cope in her new life. I acquired a number of very good books on the subject of the 'Wild West' as I did my research, and hear are four of the best, in my opinion:

Bury My Heart at Wounded Knee by Dee Brown. Written in 1970, this book perhaps marks the start of the revision of American history. The subtitle, An Indian History of the American West says it all. Brown has written here a damning, heart-breaking history of every bloody battle, every broken promise, every casual cruelty and ignored treaty of the Indian Wars. The terrible inevitability with which an entire race and culture was near eradicated is documented here - whether the Indians were beaten in battle by the sheer numbers of white settlers and soldiers, or were starved, or were herded by treaty to lands they did not know and could not thrive upon. This book exploded the myth of the plucky cowboy protecting his family against the marauding savages. A harrowing but important read. Dee also wrote Wondrous Times on the Frontier, a fascinating collection of anecdotes about life in the early West, told first-hand by the men who were there. 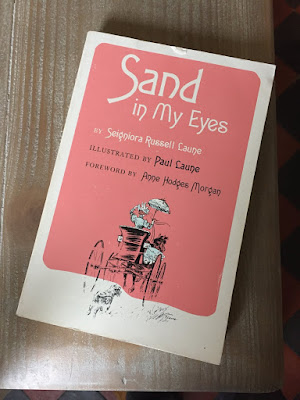 Sand in My Eyes by Seigniora Russell Laune. Something easier to read but just as interesting. This memoir, first published in 1956, tells of Laune's early life in the rural town of Woodward at the turn of the twentieth century. The back of the book praises its exuberant representation of 'the pioneering spirit that civilized the West'... But, of course, Laune is blameless in living her life at the time and in the place she was dealt, as we all generally must. Her memoir moves away from the very early days of settlement to the beginnings of the modern era in what was still very much a spit-and-sawdust town, and gives an engaging portrayal of the trials of domestic life for women back then. Tellingly, it makes almost no mention of the Indians at all, though Woodward was in Oklahoma Territory, which lagged behind the rest of the States, developmentally, because it had remained set aside 'Indian Territory' for several decades - until the pressure of white settlement grew too much. 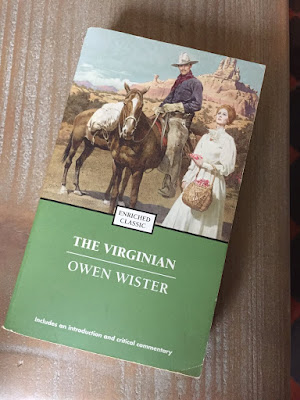 The Virginian, by Owen Wister. The novel that spawned an entire genre, The Virginian was written in 1902, by which time the West was more or less tamed, no longer a frontier, and the myth of the heroic, gun-toting, ranch-building cowboy had been born. Here we have the strong, silent man, carving his own destiny out of the wilderness; the virtuous, brave woman he loves; the romance of the sweeping landscape, and what I believe to be the first ever depiction of a quick-draw gun duel in the main street of a Western town. Very interesting to see how stories begin to be told, and how they can then grow and spread. 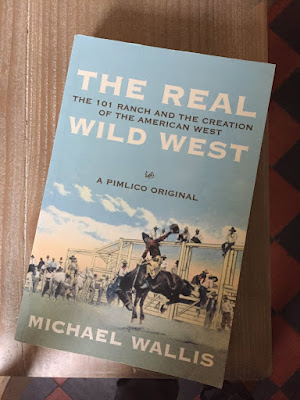 The Real Wild West by Michael Wallis. Published in 1999. This book combines a fascinating history of the vast 101 Ranch in Oklahoma - which at its height covered 110,000 acres, operated its own trains and had its own oil refinery, schools, churches and postal service - with a history of the birth and perpetuation of the myth of the American frontier. The 101 Ranch created the first ever touring 'Wild West Show', which became world famous, and featured real life figures like Geronimo and Buffalo Bill in what must surely, to them, have felt like surreal theatrical representations of their own lives. The book is packed with detail and anecdote, is hugely informative on early settler and farming life, and can be read for sheer enjoyment as well for an insight into the way in which the bloody, difficult history of a nation can have its heartbreak and suffering sanitised, repackaged and sold to the masses.
Posted by Katherine at 00:30

Thank you for this. I'll look up those books.

Dee Brown's 'Wounded Knee' is indeed a wonderful and heartbreaking book, but there was an earlier book which detailed every 'damning, heart-breaking history of every bloody battle, every broken promise, every casual cruelty and ignored treaty of the Indian Wars.'

I know because I read my Dad's old, battered paperback copy of it as a teenager and was devastated, especially by the long march and betrayal of the Nez Pierce. Unfortunately, it had lost both its cover and copyright pages - the first page of its first chapter was hanging on by a few shreds of paper and it didn't have title and author at the top of the pages. I was so impressed by it that I made it a new cover to protect it, but was only able to write on the cover 'A Book About Native Americans by Somebody.' Now even that has gone missing.

I think it was probably published in the 50s. If anyone has any idea of its title and/or author, I'd really like to try and find a new copy.

How intriguing, Susan...I wonder what that book was? Did the chapters have names. do you remember?

I have just been reading the pages towards the end of Annie Proulx's BIRD CLOUD - her book about building a house in Wyoming - where she writes about early American/settler history, including bitter words about the English elite whose huge hunting expeditions destroyed wild-life, the role of the railway companies in land allocation, about cattle ranching & sheep farming, and much about the despicable treatment of the native tribes.

Very much not the version retold in the heroic westerns my father loved.

Thanks, Penny! I do love Annie Proulx, but I've not read 'Bird Cloud' - I'll add it to my TBR pile. Have you read 'Accordion Crimes'? Astonishing book.

Bird Cloud is quite an odd book, a stoical lament for all the practical aspects of a dream house scheme that doesn't quite work, but then suddenly the writing becomes much more about the geography and ecology and history of the area.

"Accordion Crimes" is one I plan to read, but feel I may need to be in a strong state to face it. btw, there's a Paris Review Interview with Proulx online if you are interested.

Hope you trace your book, Sue. There seemed to be several books about what's known as The Trail of Tears, but these were mostly about the Cherokee, and there was no title that old.

Although not strictly about the Wild West, you would probably enjoy Frances Trollope's 'Domestic Manners of the Americans'. This was published in 1832, and shows an Englishwoman's view of a very new raw country. Many of the things she mentions would not be noted by the inhabitants, such as the fact that log cabins were surrounded by tree stumps - the builders had enough to do without dragging timber from a great distance. She often sounds rude to modern ears, but at least she was honest, and gives an interesting insight into early post colonial America.

Sue, could it be 'I Will Fight No More Forever: Chief Joseph and the Nez Perce War' by Merrill D Beal, 1964?

How have I never heard of Days Without End?! Thanks very much for writing about it, Katherine - it's gone straight onto my Goodreads wishlist. Ever-so slightly ashamed to admit that a recent binge-watching session of Westworld may have something to do with my burgeoning interest in frontier fiction (I'm sure I'm not the only one, though!)...