At the very end of 2016, when the year itself seemed exhausted by its own historical weight, I visited Highgate cemetery with Britta, a friend who grew up in East Berlin. On a frosty sunny morning it was a beautiful hillside park as well as place to contemplate. Those great Victorian cemeteries were inspired by Pere La Chaise in Paris.The first part to open, in 1839, was the West Cemetery, which is on your right as you walk down Swain’s Lane from Highgate. You have to make an appointment to go there but it’s well worth visiting with its Egyptian Avenue, Lebanon Circle, Terrace Catacombs and remarkable plants and wild life. Volunteers cut back the vegetation so that it is romantic but still passable and they also study the foxes, hedgehogs butterflies and other rare insects. 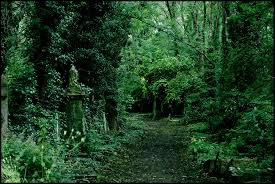 Further down Swain's Lane on the right you come to the East cemetery, which costs £4 to enter and still attracts people from all over the world. Since 1975 both cemeteries have been run by a charity, the Friends of Highgate Cemetery. John Betjeman described it as a ‘Victorian Valhalla’ .These grand Victorian necropoli were built with high walls and locked gates to keep out the Resurrection Men but they were always intended to be parks as well. Once it was beautifully manicured but now it is its wildness that makes it charming and romantic. Douglas Adams, George Eliot, several of Charles Dickens’ children and his wife Catherine, Paul Foot, Eric Hobsbawn, Anna Mahler, Sidney Nolan, Peter Porter, Ralph Richardson Alan Sillitoe, Herbert Spencer Leslie Stephen and Max Wall are all buried here. Many of the less famous graves are very touching; there is an area dedicated to London firemen and some of the epitaphs on the graves of forgotten people read like short stories. For instance: “Emma Wallace Gray Died in October 1854 in the 19th year of her age...From the effects of fire, her dress having accidentally ignited ten days previously. In bloom of youth, when others fondly cling to life, I prayed, mid agonies of death.”

Karl Marx (1818-1883) upstages all his subterranean neighbours. The morning we were there a constant flow of international visitors surrounded his monument. He had been expelled from both Cologne and Paris because of his political activities before settling in London in 1849. "From this time on he was one of the leaders of the socialist party in Europe, and in 1865 he became its acknowledged chief" ( to quote from his obituary).  He was laid to rest in the same grave as his wife Jenny, who had died less than a year and a half before him. Eleven people attended his funeral, including his friend Engels. Other members of his family were later buried in the same grave, including his daughter Eleanor, known as Tussy. She was a courageous supporter of the early Trades Unions who poisoned herself in 1898 after discovering that her partner, Edward Aveling, had secretly married a young actress.

As the years passed so many people came to visit Marx’s grave that it was moved to a more accessible spot, on the main path. The present grandiose marble monument was unveiled 73 years after his death, in 1956, in a ceremony attended by about 200 people, “ to honour the memory of a man whose spirit - if that is the right word - now dominates approximately half the world.” (as reported in The Guardian the following day). One of his most famous quotations is carved on it: ”The philosophers have only interpreted the world in various ways - the point however is to change it.” Laurence Bradshaw, the sculptor, said he aimed to express the "dynamic force of his intellect" and wanted the sculptured likeness to be at eye-level rather than "towering over the people." 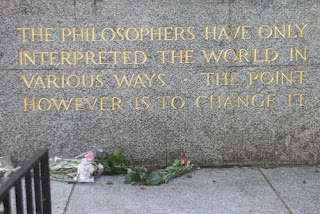 Everybody who lived through the mid -20th century has their own Marx. At 15 I was a Young Communist for a few months and attended earnest discussion groups about his writings in West Kensington. A few years later I was taught history by academics who saw the world in terms of a Marxist interpretation. For some he was a demon, for others an omniscient prophet. Britta, my companion the day I visited the cemetery, is nostalgic for the GDR she lived in until she was in her late thirties. After the wall came down in 1989 there was a long public debate in Germany about what to do with the monuments and place names of Communism. There’s a striking scene in the 2003 film 'Good Bye, Lenin!' where the huge Lenin statue is lifted up by helicopter and flies off over the city, pointing as it goes. Finally, Marx was accepted as a philosopher and the grand boulevard round the corner from her flat is still called Karl - Marx - Allee. She tells me sadly that her grandchildren are taught at school that he was worse than Hitler.
At the moment, with socialism in crisis, you don’t hear much about Marx in England. Above the gigantic hairy bronze head hovers a large (if invisible) question mark. What does Marx mean to us now? He would not necessarily have recognised his own ideas in the uses that were made of them after he died. In 1882 he wrote in a letter of the form of 'Marxism' which arose in France: “If anything is certain, it is that I myself am not a Marxist.”


Last year there was a three-part Open University /BBC co-production for BBC Four called Genius of the Modern World. Bettany Hughes explored the life and works of Karl Marx, Friedrich Nietzsche and Sigmund Freud. “We might not realise it, but we all live with a 19th-century male philosopher in our lives. Karl Marx, Friedrich Nietzsche and Sigmund Freud are towering thinkers, men with the wit and the will to question the status quo.” Nobel laurate Paul Krugman wrote recently that when thinking about automation and the future of labor, he worries that "it has echoes of old-fashioned Marxism – which shouldn't be a reason to ignore facts, but too often is."

At his best Marx was such a powerful writer that it seems likely that people will always be influenced by him. He wrote that “ Capital is dead labor, which, vampire-like, lives only by sucking living labor, and lives the more, the more labor it sucks.” Another quotation that has great resonance for me at this time of crisis in our democracy is: “The oppressed are allowed once every few years to decide which particular representatives of the oppressing class are to represent and repress them.”

“The oppressed are allowed once every few years to decide which particular representatives of the oppressing class are to represent and repress them.”

He saw very clearly, his own time and ours, didn't he?

Thanks, Miranda - and for reminding me that I must go there next time I'm in London.

Thanks for all your comments. I should have mentioned that there are interesting events in the beautiful Victorian chapel. I just went to a talk about Max wall and in May there's a Karl Marx Memorial Lecture there.