Last Wednesday, it was announced that Clare Hollingworth, doyenne of foreign correspondents, had died in Hong Kong at the age of 105. During her long life she reported on conflicts around the globe, thriving on the thrill and the danger, maintaining with typical bravura that there was 'a certain attraction in being shot at - providing they miss.'
Born to upper middle class parents in Leicestershire, she quickly escaped the life of marriage and motherhood that had been mapped out for her. She took a secretarial course and went to work for the League of Nations in Geneva and then in Poland for the British Committee for Refugees from Czechoslovakia.   She helped many refugees to escape from Germany. Too many. She was asked to leave Poland. She returned to Britain and in August 1939, she got a job as a reporter with the Daily Telegraph, working with Hugh Carleton Greene in Warsaw. Her career in journalism began in spectacular fashion. As a novice stringer stationed in Katowice, she managed the scoop of the century: the outbreak of the Second World War. The day after her arrival, she borrowed the British consul's official car 'for a day's shopping' over the border in Germany. The first town she came to was deserted. Then, as she drove on the the next town, she was passed by 65 dispatch riders. She stopped for lunch before driving back to Poland. On her return journey, she noticed that the sides of the roads were obscured with hessian screens. As one blew back, she saw rows and rows of German tanks. They belonged to von Rundstedt's Army Group South. Her story appeared on the front page of the Telegraph on 29th August, 1939, with the headline: '1,000 tanks massed on Polish frontier'. The next day, she woke to the sound of German bombers overhead. She rang in her story. The war had begun. At first she wasn't believed, until she put the telephone receiver out of the window and shouted, "Listen!" 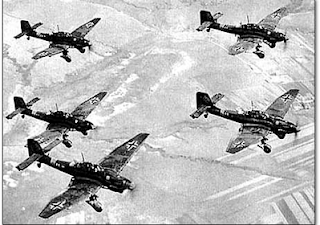 She escaped from Poland, going first to Hungary then to Rumania where she was nearly arrested by the ultranationalist Iron Guard. From Rumania, she went to Bulgaria, then to Greece, always just a step ahead of the German forces. Eventually, she escaped to Egypt in an open boat. Once there, she went on bombing missions with the RAF and joined patrols behind enemy lines.

Most of her Second World War reporting was done from the Middle East. She reported from Persia on the Anglo Russian invasion and conducted the first interview with the Shah when he ascended the Peacock Throne. He remembered her and, decades later, she was the only reporter granted an interview when he abdicated in 1979. 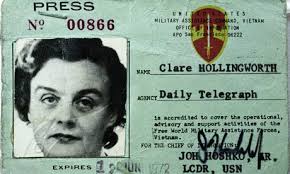 She went on to cover conflicts in Algeria during the '50s, Malaya, Borneo and Aden (Yemen) in the '60s and the Indo-Pakistan war of 1965. She was in Israel during the struggle for independence and again to cover the Six Day War in 1967. She was in Vietnam and Communist China, always at the centre of the action, tough, fearless and relentless in pursuit of a story. She continued to obtain notable scoops, reporting Kim Philby's escape from Beirut on a Soviet ship in 1963 (a story suppressed by her paper for fear of libel), Chairman Mao's severe stroke in 1974 and tipping Deng Xiaoping as China's eventual leader. Although her stories were often initially greeted with scepticism, her reporter's instinct remained unerring. 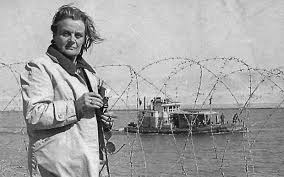 She continued to work as a Far East correspondent with the Sunday Telegraph. Based in Hong Kong, she covered the handover of the colony in 1997. When failing eyesight and hearing made it impossible for her to continue her work, she still had the papers read to her everyday and held court at the Hong Kong Foreign Correspondents' Club over a gin and tonic. Kate Adie recalls being told of her presence with the words: 'There's a legend upstairs.'

She was a role model for generations of female reporters and correspondents and, to the end, she slept with shoes and passport by her bed, ready to go anywhere should the call come. In a career that spanned over fifty years, she covered every major conflict from the Second World War onwards and is rightly regarded by many of her peers as one of the finest journalists of the 20th Century.

...Stuck the reciever out the window and said, "Listen!"
What a woman!

I know! Scoop of the century and drinking G & Ts in The Hong Kong Foreign Correspondents Club at 100+. My kind of woman!

Great tribute Celia, thank you. I read that asked when 105 where she would go, if she could turn the clock back, she said she would read the papers from cover to cover and then go to the most dangerous place, as there would always be a story there...

Thank you. A fitting tribute for an amazing woman.

She was an amazing woman. So sorry she's gone.