The Queen of Tonga by Janie Hampton

Here’s a story to cheer you up on a miserable cold day at the end of January. On a June afternoon in 1953, a golden coach was pulled through the crowded streets of London in the pouring rain by eight grey horses. 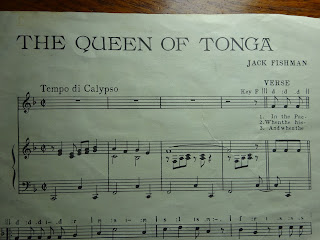 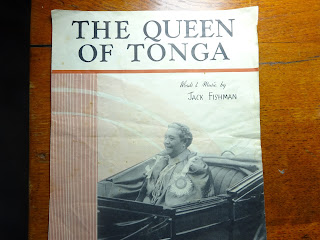 My parents must have watched the Coronation on television - someone else's, because they didn't have one. But I remember them saying that the Queen of Tonga was the highlight, and how everybody loved her!

Such confidence and such an open and friendly style, in contrast to the refined waves of the aristocracy. The Queen of Tonga was a most admirable Majesty!

Oh, I remember her so well! She was wonderful, exotic - and where on earth was Tonga?! As you say, Janie, no one knew. I was nine, nearly ten. We didn't have TV then, but my sister and I went round to our friends who did. And of course there would have been pictures in the newspapers too. Thank you for this memory.

Isn't it extraordinary when one is old enough to have been IN history?

My uncle bought a TV especially to watch the Coronation and, as you say, Queen Salote was the highlight of the day.

We lived in South Wales and had a street party - the weather was so much better than it was in London, sunny and warm.

What a fabulous retelling of a never-to-be-forgotten moment for those who had the thrill of seeing the Queen of Tonga in all her glory on that exciting day. She sure must have been a character with a generous heart for the masses. Good on her.
I had never heard this story until this morning while reviewing a novel by Penny Vincenzi for the publishers and the Starts at 60 FB page and website where it is mentioned ... “The star of the procession, apart from the Queen, radiantly beautiful, was undoubtedly Queen Salote of Tonga, who insisted on having the roof of her carriage open and sat waving, smiling determinedly, and getting extremely wet.”
So I did a search online and found your well-written piece. Thank you for enlightening me even further.

Noel Coward has denied the "lunch" crack. He never said it and it was more likely the work of a tabloid hack, casting cannibal aspersions and fat shaming a noble queen. It was offensive to all Tongans then, even more so now. Perhaps it's time to stop quoting this racist slur, which reflects poorly on an otherwise fabulous coronation.