A Trip to Eyam: The Plague Village by Fay Bound Alberti

For as long as I can remember I have been interested in the history of the plague. I learned about the village of Eyam in Derbyshire while studying at the University of York. And a few weeks ago, I dragged my kids off for an explore. We stayed at the YHA’s Ilam Hall, an enormous, rambling place surrounded by green countryside. Perfect for a cheap base from which to explore points of interest in Derbyshire, including a trip to Eyam. 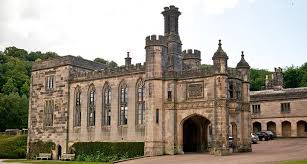 Eyam is a beautiful village in the Peak District National Park. It is most famous for an outbreak of bubonic plague that occurred in 1665, a year before the Great Fire of London. The present village was founded by Anglo-Saxons, though lead had been mined in the area since Roman times. The village was once industrial but now most of its economy is based on its status as ‘the plague village.’

That story began when a local tailor obtained a flea-infested bundle of cloth from London. Within a week the tailor’s assistant, George Vicars was dead, and more began dying in the household soon after. By pure coincidence when we stopped at Eyam we parked next to the ‘plague house’ where the outbreak had started. This house - like the others in the village where many people died - are a kind of living monument. People living there now must be used to visitors gawking up at the windows, trying to imaging how it would have been to live alongside loved ones dying of the plague: the smells, the sounds, the sights, the fear. 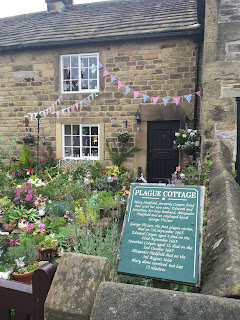 The ‘plague cottage’ of Eyam where the plague first broke out. The names of the dead in this and many nearby cottages are listed on signs outside

As the plague spread rapidly through the village, precautions were taken at the advice of the Reverend William Mompesson, the village rector and his Puritan Minister, Thomas Stanley. St Lawrence church was central to the lives of villagers, just as the church was generally for people in the seventeenth century, many of whom viewed the plague as God’s punishment for wrong doing (a particularly challenging thought so soon after the English Civil Wars). It was there that baptisms, weddings and funerals as well as the daily homilies on obedience and devotion reminded one of one’s place in the temporal and spiritual realms. Standing in the small church today, looking up at the now-faded wall paintings that would once have been brightly painted, one has a sense of how narrow and limited the world would have seemed if one was trapped there. Mompesson started to hold his services outside the church, as people were increasingly reluctant to stand shoulder to shoulder with their neighbours. 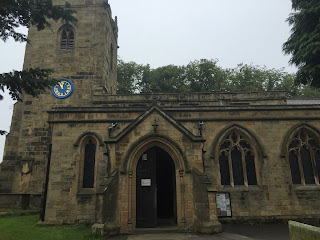 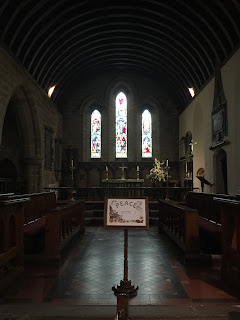 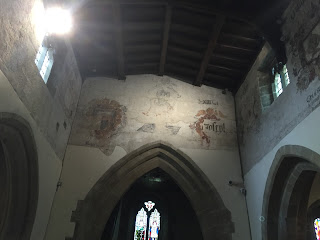 St Lawrence church at Eyam, with its famous stained-glass windows depicting the quarantine of the village and the now faded wall paintings. Can you spot the skeleton?

It was Mompesson who encouraged the villagers to isolate themselves from the outside world, quarantining its population rather than allowing the disease to spread further. The sacrifice of the people is told in a stained-glass window commemorating Eyam’s story. The number who died is disputed, but we know that at least half the village died to the plague – upwards of 273 people (the number recorded in the Eyam church register). The danger lasted for fourteen months, and it was far longer before anything like normalcy was resumed. 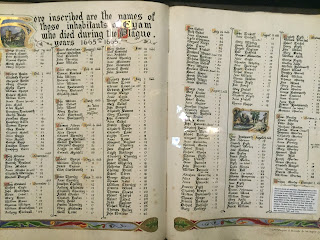 Survival was random. Several who remained alive had close contact with those who died from the plague but did not contract the disease themselves. One Elizabeth Hancock was uninfected though she buried six children and her husband in eight days. The unofficial village gravedigger Marshall Howe also survived.

Critics of the village’s quarantine have recently pointed out that wealthier residents were able to circumvent the ban.  Indeed, Mompesson sent his own children away to Sheffield so that that could escape the quarantine. He wanted his wife to go with them, but she refused, deciding instead to stay with her husband and tend to the people of Eyam. Catherine died of the plague and her grave still stands in the churchyard. Mompesson himself was forever associated with the plague and not universally welcomed at his next parish. He did remarry, however and eventually became Prebendary of Southwell, Nottinghamshire. 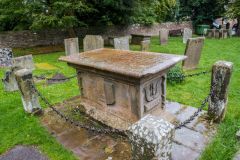 The grave of Catherine Mompesson

Eyam is well worth a visit. Not just for the village itself and the glorious church which is filled with seventeenth-century detail, but also for the attractions around it. Some of these are plague-related – such as the Coolstone or Boundary stone, where money soaked in vinegar (believed to kill the infection) was placed in exchange for food and medicine for the isolated villagers. 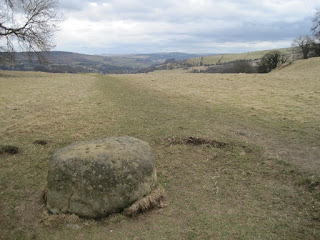 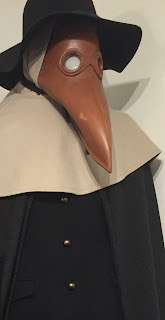 The garb of the plague doctor, complete with beaked nose stuffed with herbs and spices. 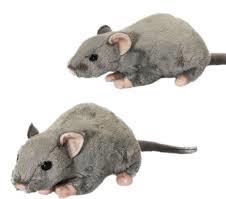 It's a lovely area, isn't it? I'm from Derbyshire myself, but from the not-so-lovely southern part. Such a sad story.

So interesting! When I went to the museum there, I was fascinated to read that some descendants of these villagers are involved in helping AIDS research because of the immunity of their ancestors to the plague xxxx

The mask had a curved beak, shaped like that of a bird. Straps held the beak in place and the beak held dried flowers, including roses and carnations, herbs and camphor or vinegar. These contents were to keep away bad smells, which were believed to be the cause of plague in the seventeenth century (the theory of miasma being that bad smells were bad 'air' which was the cause of disease).

I suspect the curved beak would have prolonged the journey for any Yersinia pestis and therefore assured that less of them arrived into the doctor.