ON THE SHIFTING IMAGERY OF WAR – Elizabeth Fremantle

A visit to the Paul Nash exhibition at the Sainsbury Centre in Norwich the other day got me thinking about how the way we represent war culturally has changed over the last two hundred years and how this relates to our attitudes to conflict. 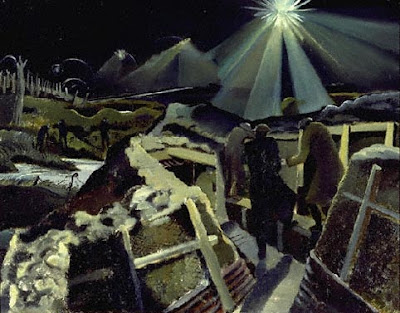 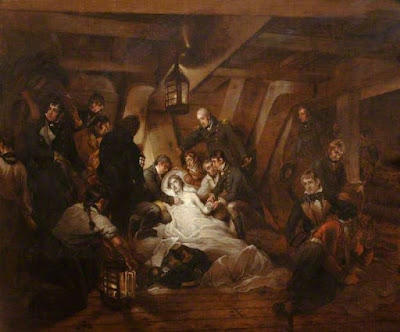 The Ypres Salient at Night (1918) confronted me as I descended the stairs. I was captivated by its obvious echo of representations of the magi following the Star of Bethlehem. But in this case the three figures are hunched together in terrified awe in the face of an exploding shell in the night sky. The irony is cutting. This is a wasteland bereft of hope or redemption, in the gloom everything is dead and the light from the shell casts sharp light over the angular shadows of the trenches. This depicts a post-Neitzschean world abandoned by God.

I was reminded of an earlier painting: Arthur William Devis's depiction of Nelson's deathbed. Similarly it references religious iconography, the supine figure of Nelson at the centre is lit like a Christ figure. But in this case it is a straightforward application of symbolism to glorify the sacrifice Nelson has made for his country. There is no irony here. Indeed most nineteenth century war painting seeks to emphasise courage, strength and patriotism. Take Elizabeth Butler's charging cavalrymen, full of glorious bluster and bravery at Waterloo, in Scotland Forever! (1881) as an example. In it the Scot's Greys gallop at full tilt when it is known that in reality in the deep mud they could barely make a canter. Butler has manipulated, sanitised if you like, the notion of battle, leaving no place for death in this image in which everything is bursting with life. Of course death looms and perhaps there is a hint of it in the exclamation mark of the title but the artist seems to refuse to face it head on. 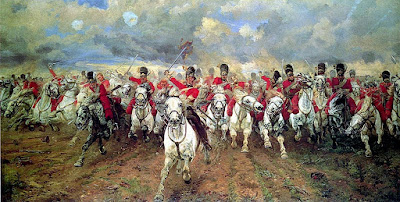 It is only with the First World War that artists begin to show the feebleness of man in the face of war, the terrible waste and suffering, the pointlessness, the death. John singer Seargent articulates this vividly in Gassed (1919). There is no sense of glory in this desolate line of broken men walking amongst their dying comrades. It is an image of utter despair and of course brings to mind Wilfred Owen's brutally ironic and devastating poem Dulce et Decorum Est. 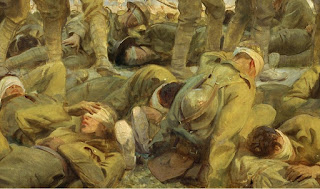 By the Second World War Nash's work became increasingly symbolic, reaching its apotheosis in Totes Meer – Dead Sea (1941). In it he depicts the sea of destroyed fuselage from the crashed aeroplanes of the Battle of Britain. The mess of twisted metal lies in peaks and troughs like a stormy ocean, a kind of nightmare landscape in which nothing is quite what it appears to be. There is no death here unless it is in the absence of life, just at the centre a wing with a cross on its tip that resembles a coffin. Yet death infuses the canvas and though it is day the moon hangs in the sky in place of the sun. 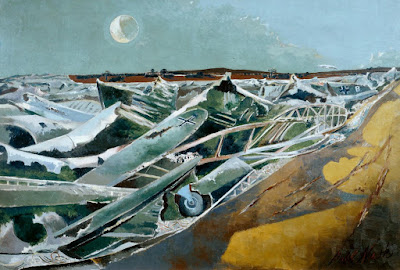 It is cinema that is the medium that best depicts modern warfare. The brilliant war films, The Hurt Locker, Apocalypse Now, The Killing Fields are those that immediately spring to mind, amongst many. There are few contemporary artists who tackle the subject but Bran Symondson, who has served in Afghanistan, has. His work is a critique of modern warfare that doesn't depict scenes of battle or destruction but drills down with powerful imagery into the causes of war. He takes the deadly paraphernalia of conflict and presents it in such a way – a grenade wrapped in dollar bills, and AK47 covered in red, white and blue butterflies – that his message is crystal clear and coldly symbolic. It seems to me to reflect exactly the feelings we have about war now, our cynicism about those who pull the strings of modern conflict, so very far removed from that nineteenth century sense of glory and courage. 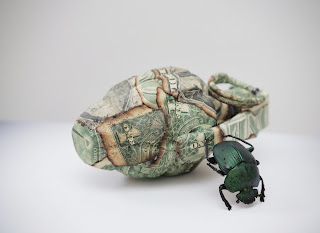 Elizabeth Fremantle's latest novel, The Girl in the Glass Tower, is published by Penguin.

A powerful piece - thanks.