Hitching a Lift to the Past: N M Browne 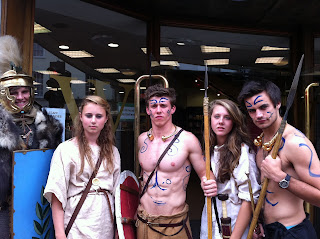 The past is another country so they say and getting there can be problematic.
You can try the usual routes, letters, contemporary reports, memoirs, even novels written at your destination but the further back you go the rarer they become and the more controversial their meaning. Right back in first century Britain, my destination of choice, there is little written material of any kind. The twenty first century fiction writer is left pacing up and down, checking their watch at the researcher’s bus stop and hitching a ride on anything that’s going their way.

And who is going our way? Well, archaeologists mainly and that useful and much maligned breed, the experts on the arcane and ever so slightly bonkers historical reenactors. 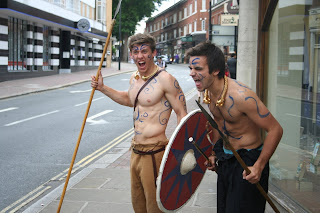 And here I must declare my interest, I have on occasion removed my shoes to play the part of a Celtic first century slave and, in borrowed finery, strutted my stuff as a fourth century Roman matron. But I have merely dabbled. There are a hardcore of enthusiasts in this country who have researched the character they play, who have painstakingly recreated their kit, backstory, lifestyle, who’ve walked the slightly blistered walk of the Roman centurion, talked some of the talk ( though usually not in Latin) and even eaten something like their food and hauled the weight of their packs. Such paragons can usually substantiate their assumptions by reference to the archaeological record. As a researcher what’s not to like?

I like my historical fiction to feel real. I hate being told things. I especially hate being made to endure the fruits of a writer’s extensive research. As a reader I want to read a novel set in another time and place, I want to care about the story and I don’t want a history lesson. I want to discover the past world of a historical novel as naturally and as easily as I might the contemporary milieu of literary fiction. 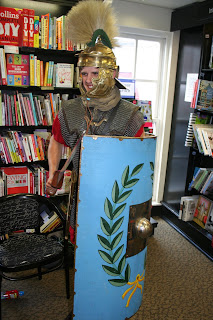 As a writer I know just what a difficult trick that is to pull off when every sentence is a challenge. Morcant, my hero needs a drink. What kind of cup would my hero drink from, would he have a cup or a canteen and what is he drinking? What is in his kit bag? What’s it made of and how would he carry it? This information, the work of a moment to read on the page, can take long hours to discover. Such detail has to be gleaned from a variety of sources and even then there is the need for inspired guess work for testing out theories and for making it up on the balance of probability. Good re enactors can do a lot of that work for you. In finding that lost other country they can help to put you on the right road.
Posted by Nicky at 08:15

I totally agree, Nicky! I adore ever so slightly bonkers historical reenactors, too! I'm lucky they make them in two of my favourite flavours: Roman and US Civil War/Cowboys. What would we do without them?

I agree with you Caroline; my particular interest is the English Civil war and I find that talking to the re-enactors is a great source of information.

I agree too - the reenactors can be brilliant! - we had Regia Anglorum at my launch party for Troll Fell, and they staged a combat in which real blood was spilled, although luckily only from someone's thumb... They were also fantastic about providing details on how a Viking age boat called a faering would handle in a rough sea...

Couldn't agree more, Nicky. I did loads of research for my book about Alfred the Great, and then a few pages into the writing was completely floored when Alfred had a sip of his drink. He picked up his - what? Mug? Goblet? Made of pottery, wood, silver, bronze? And when my merry crew got to Athelney, what did they eat for their first meal? What were they going to sleep on and under? The Regia Anglorum website was immensely useful for all those kinds of details.

Wolf Blood by N.M.Browne is published by Bloomsbury.

That blue paint worn by Celts - it's woad, isn't it? My sons were painted with that on a visit to an Iron Age village in Wales. Apparently it's made by pissing on a plant of some kind. So these re-enactors - they're smeared with wee.

Fantastic novel, and wonderful blog... glad to have found it...

Woad - I was told that there's a dozen different bases it can be mixed with, but most bring out a colour that is identical to the dawn/dusk camouflage grease used by the UK special forces - a kind of grey. Only (I think) egg white and human semen make it blue. And the egg white is painted on, then the colour develops over time, like developing a film. Which would be pretty magical, I think (if I've got the bases right)...

Semen - even worse! I thought my sons were painted with pee and now you tell me it was spunk!