SITTING IN MY SOUP by H.M. Castor 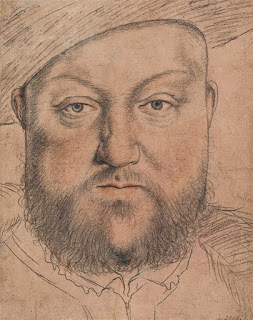 What a fascinating post! Thank you so much for sharing this.
I wonder how many of us feel it, this sense of not yet having found 'the' book, the one we really COULD write. I'm still groping for mine, and it feels a little like getting little snatches of a half-remembered tune. Maybe one day...
How does it feel having found and written it? Is it completely satisfying, or does a bit of you still feel there may one day be something even better?

I can't wait to read your book and to see what it is you have to say about Henry. This book is obviously incredibly important to you as a writer - I wish you great success with it.

Having been lucky enough to read a proof of VIII already, I know that your gamble has paid off. It's a wonderful book, and yes, it does say something new about Henry. The transition from fact to fiction probably must be accompanied with pain and anguish, like all worthwhile artistic endeavours.
Michelle Lovric
(typing as anonymous as Blogger is having one of its tantrums this morning)

It's such a joy to learn of the angst and the internal struggles you experienced, Harriet. I've read the proof of the book and loved it - so it was obviously all worthwhile. This was an inspiring blog for all writers. Good luck in October.

Thank you for this really fascinating and inspiring insight into the writing process.

I found this enthralling, Harriet and can't wait to read the book. Fantastic post.

A brilliant description of the process of trying to write the book you need to write - and like the others, I can't wait to read it!

The premise of your book struck me as interesting and I've put it on my TBR list.

The creative process is wonderful, isn't it? Never stops pushing you to do something new, better.