Playing With The Past: Counterfactual History (Part I) 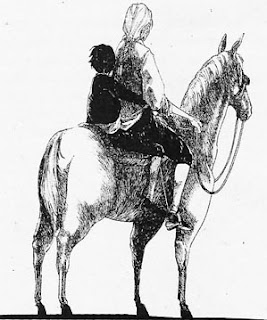 I am not a historian. I am a writer of fictional narratives who attempts, among other things, to evoke the past for a young audience. Like many children’s novelists I started by writing for my own children. I wanted to share the excitement I felt when, as a child myself, I encountered the world of Sutcliff’s Eagle of the Ninth or Dumas’s The Three Musketeers for the first time. There was that time-tourist feeling of visiting different historical periods on a kind of fictional grand tour. I recall being fascinated by the then-and-now aspect of these books and, above all, being surprised that I was able to relate to these people from the past who seemed to think and feel just like me.
I was inspired to write my first novel while listening to the historian Lucy Moore talking about eighteenth-century criminals and their vernacular. She spoke of the dangers of Covent Garden, of highwaymen, footpads, anglers and straw men. A ‘prancer’ was a horse, ‘velvet’ a tongue, murderers were ‘scragged’ at Tyburn, and so on. I started to research the period and read about a case of ‘half hanging’ (surviving the noose) in the Newgate Calendars. I remember thinking that my son would love all of this: the darker side of eighteenth century London in all its ramshackle glory.
So writing about history did not used to concern me in the same way that, say, characterisation or pace or narrative voice did. Now, increasingly, it does. Long gone are the days when ‘history’ was taught as an ideologically neutral set of dates and facts which could be learned by rote. History tends now to be viewed as fragmentary and selective; it is concerned with viewpoint and weaving its own narratives. And this means that an accurate depiction of ‘history’ becomes challenging – if it is possible at all. Nevertheless, the writer of historical fiction is obliged to create a credible, coherent and vivid idea of the past. Fiction sometimes has to go where history fears to tread.
Then there are questions related to the responsibility of children’s / YA authors to their readership. For example, even though writing a novel with the primary intention of educating its readers lacks appeal on many levels, the notion of a historical novel which does not care if it misinforms is worse. On the one hand writers are not teachers, on the other, irrespective of the author’s motivation and expertise, children’s historical fiction contributes to the idea of history. If I have a mental picture of Roman Britain it has nothing to do with my assorted history teachers and everything to do with the imagination of Rosemary Sutcliff.
Historical fantasy fiction (in my own case the timeslip genre) provokes its own specific debates. There are those who prefer to take their historical fiction ‘straight’ and who may feel that there are too many pitfalls in writing time-slip, ‘alternative’ history and other species of historical fantasy to justify the attempt. What are the ramifications of using famous historical figures in one’s fiction, of having, for instance, a twenty-first century boy berate Dr Samuel Johnson for writing his dictionary and dooming him to the prospect of weekly spelling tests? It is ironic, however, that ‘playing with history’ can necessitate research that is just as - if not more - rigorous than ‘sticking to the facts’. 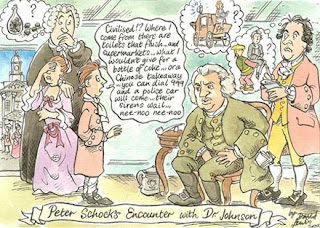 In next month’s post I am going to write in detail about my experience of writing counterfactual fiction, of asking the question: What If...? Of all the episodes in my time-travelling trilogy writing my counterfactual endeavour undoubtedly gave me the most pleasure. It was also, by far, the most difficult thing I have written. Appalled at learning that England had ‘lost’ America, my eighteenth-century villain, Lord Luxon, took it upon himself to find a way to sabotage the American War of Independence. Trying to identify, on my villain’s behalf, the potential turning points of America’s early history was a fascinating enterprise. The project engendered months of research. I visited New Jersey and was given invaluable advice by a Princeton historian. One thing I learned during the process was that imagining what didn’t happen certainly teaches you a lot about what did.
Thank you for visiting History Girls and over the next month I shall very much look forward to reading my fellow contributors’ posts and our readers’ comments.
My thanks to Mizan, my Indonesian publisher, for permission to use one of their lovely illustrations from Gideon the Cutpurse. Thanks also to David Lewis for permission to use his cartoon. www.davidlewiscartoons.com
Posted by Linda B-A at 23:58

Thanks, Harriet. I really enjoyed writing it. Sometimes you have to write down your thoughts to find out what you think! Thanks again to Mary et al for setting all this up - it is such a great forum.

That's most interesting, Linda! Will look forward to next month's piece.

Gosh Linda, you've set the bar high with this giving us lots to think about and discuss! Thanks for showing the potential in historical writing and its endless fascination. Theresa

Thank you, Linda. Yes, you have set the bar high. And I agree, one of the things that drags my attention relentlessly into the past is the language. Francis Grose's A Classical Dictionary of the Vulgar Tongue would be my desert island book, even if over the years I have learned quite a lot of it by heart.
And one of the great joys of the Coens' film of True Grit, which I managed to see only last night, was the uncompromising use of contemporary language by the characters. The wordiness was character-building, time-evoking and just plain beautiful.

Fascinating - and I hope in the next installment we will find out why what you imagined DIDN'T happen. Otherwise we will be puzzling for ever over how it could all have turned out differently!

Thanks so much for the comments - they are much appreciated. I certainly will talk about why what I imagined didn't happen next time! I'll also be seeing True Grit and getting hold of Francis Grose's dictionary which sounds right up my street. Finally, many congratulations to Teresa on winning the Shadow Carnegie which is voted for by so many children.

Fascinating, Linda! And specially so for me, because I have read your trilogy and can know see some of the bones underneath its structure. Looking forward to the next episode.

Great post, Linda. The historical material (I won't call it facts, because it's not as simple as that) is what gets our writerly senses going, but they're not the central point, it seems to me: the storytelling is.

What I love about time-slip is that it makes explicit what too many historical novels are too nervous of admitting: we make this stuff up...

I just realise too late we should have scheduled your post for today, 4th July! Perhaps you can swap with Kath next year!

A lot of British writers seem to have been inspired by Sutcliff. She deserves wider recognition.