Historical Fiction for Teens? You must be mad! - Celia Rees 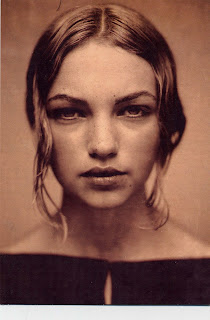 ... was the reaction I got when I first pitched my proposal for Witch Child. I had the idea in about 1996 when I was doing some research for a completely different kind of book: a contemporary, supernatural thriller called Soul Taker. I was looking for info on magicians, necromancers, bad guys who could do real magic, in the Oxford Book of the Supernatural by D.J. Enright. 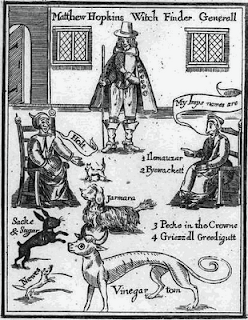 I didn't really find what I was looking for, but I did find an account of Matthew Hopkins, self appointed Witch Finder General. I'd heard of Hopkins, seen the 1960's Hammer Horror movie, and knew that he was a nasty piece of work, responsible for the deaths of maybe 300 people (mostly women) in and around East Anglia at the time of the English Civil War. As I refreshed my memory, an idea began to nag at me and I immediately abandoned what I was supposed to be doing and looked him up in another book which showed this woodcut of him, complete with witches and familiars.

I was looking at this picture and thinking, speculating about what it meant to be a witch. I thought maybe it was part of a European shamanistic tradition that involved a knowledge of healing, a certain amount of clairvoyant ability and perhaps a little light shape shifting. In British folklore, witches were supposed to be able to turn themselves into hares. In the words of the Scottish witch, Isobel Gowdie:

I shall go into a hare,
With sorrow and sych and meickle care 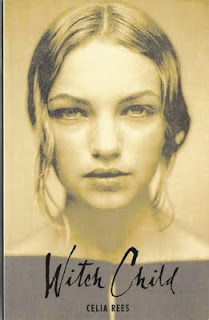 I did not think that it had anything to do with worshipping the Devil. I thought that was likely to all be in the minds of the persecutors. Then I began to wonder, where else in the world had a tradition of shamanism at this time? Simultaneously, I was beginning to make up a story about a girl who is a witch, or is being brought up in this tradition by her grandmother. What if a Matthew Hopkins lookalike comes to their village, tries the grandmother and hangs her? What happens to the girl? Where can she go? Shift back now to the parallel thought - where in the world did shamanistic people live? America. Settlers going to America took orphans with them, I knew from my American Cookbook (information can come from the most unlikely sources) so she could go with a group Puritans. They did not just take orphan teens with them, they also took their fears and superstitions which would culminate in the last great outbreak of Western witch persecution in Salem, Massachusetts. I knew all this, but something else was intriguing me now. What if this girl met Native Americans? She would be caught between two groups of people: one who would revere her as a person of power, the other would want to hang her.

It was a strong idea and I knew I wanted to write it, even though part of me wanted to unthink it immediately. It would involve a lot of research and I'd never written a straight historical fiction before. Apart from that, I had to interest a modern teen audience. I decided to make the historical part into a diary, to bind the reader to the girl, and that immediately opened another realm of possibilities. I really wanted to do it now all I had to do was convince a publisher. That was the hard part. Historical for teenagers? Are you mad? Dead in the water. They just aren't interested. So I took that as a 'No'. Undaunted, I set off on another path. I wrote a long, detailed proposal and sent it in for an Arts Council Grant. Nothing doing here, either. So I put it in a drawer. Then, completely out of the blue, I got a phone call from my agent. Sarah Odedina at Bloomsbury was looking for somebody to write a book about a girl who was a witch. Would I be interested? The rest, as they say, is history. In 2000, Bloomsbury published the book beautifully; Candlewick Press did the same in America in the following year. The rights were sold in 28 other countries and the book is studied in schools here in the U.K. and abroad. Turns out teens have an appetite for historical fiction after all. I became a writer of mainly historical fiction and I like to think that I helped to break down the received prejudice against a genre that has the power to enthrall, entertain, inform the mind and excite the imagination all at the same time.

I have my first YA historical fiction coming out in three weeks, so I'm feeling particularly indebted to authors such as yourself. I love your books!

Thank you, Vicky! And good luck with the book.

Thank you for leading the way for us, Celia!

Good on you, Celia. I did enjoy Witch Child.

Your books were definitely on my mind when I was considering writing my own book. Witch Child is excellent. Thanks Celia

I still recommend Witch Child when kids ask me which are my favourite books ;-) they're delighted when I say I think it's brilliant because half of them are already studying it!

I'm just glad that all those nay sayers were proved wrong and pleased that Witch Child is read and liked 12 years on. That's another good thing about writing Historical fiction. It doesn't date!

Witch Child was/is a corker and good on you!

I loved Witch Child, and it's humbling to think that without that phone call from your agent, it might still be sitting on a dusty hard drive! (I had a similar tip-off recently from our own Mary Hoffman that rescued my Pendragon series from just such a fate.)

These lucky breaks are so important to a writer, yet the book is important, too, because there's little point knowing about a market if the book does not exist. (I shall tell myself this next time I seem to be writing totally the wrong manuscript and everyone in the industry is telling me "you're mad"... )

after reading and loving WITCH CHILD I started thinking of the wonderful plots one could find in history, so you started me off, too, Celia.

I have read Witch Child and the sequel Sorceress so many times i cant count. Love those book. And Pirates also. You were the onw who got me in to historical fiction. Thanks alot! :D

Very interesting post. I'm currently doing edits on my book Road to London after a similar experience and which - thanks to Mary Hoffman's advice - had a happy outcome. I loved your Fool's Girl and congratulations on being nominated for the Young Quills Award. Quite by co-incidence, I started reading Witch Child last night and I know I'm going to love that one, too.

some great comments. Thanks, everyone!

What a great story, Celia. It's so good when an editor/agent calls to ask for exactly the thing you want to write (or have written!) And it's a wonderful book.

Fascinating to hear how it came about, Celia. Just finished Fool's Girl and I loved it. I also really enjoyed Pirates, but I've not read Witch Child, yet. Looking forward to it even more after reading this!

I am so curious...what is the name of the model you used for the cover of the "Witch Child"?