Flights of Fancy by Penny Dolan

The Harry Potter stars have done their final publicity rounds and the film is now at a cinema near you. When the story ends, will the audience hurry out, ignoring the long lists of credits for all the production teams and various technicians?
I hope not. It is probably the only time those people will get their moment of honour. By the time the film hits the small screen, no matter how long they had worked on Harry’s fictional world, the names of these small makers will be shrunken ciphers,
Is this truly a History Girls post, you wonder? It is, it is!
Way before the movie industry existed there were  - as there still are – hosts of  “backstage” people working in the theatre, creating the atmosphere, the excitement, the entertainment and the very spectacle of the drama for the actors and their audiences and keeping shows running night after night, particularly during the years of the great Victorian actor managers.
I am a writer first and a historian by interest rather than by formal training, and so it happened that one day, jackdaw-wise, I seized on a bright trifle to decorate the nest of my writing. That shining object was the idea of “flying” in the theatre.
A production of Peter Pan in the vast, modern West Yorkshire Playhouse began my fascination, especially when the entire audience took in its breath as the young actors swooped overhead across the darkness with the lighting effects masking all supporting wires.
Just how, in practical terms, did they do it? And who were the “who” who made it happen? What must it feel like to soar into that space? The beginnings of a novel for older juniors were mumbling around in my mind, and that is when I wondered what child wouldn’t love to read about the experience of “flying”, to imagine they were high above the audience too?
In the theatre programme there was a listing for the Kirby Fliers.  This was, astonishingly, the same family company that worked on the original production of  “Peter Pan”, way back in 1904.
Earlier flying effects were largely created by simple ascending and descending ropes, or by some sort of trapeze, or by a pair of stagehands hauling cumbersome pulleys and devices that dragged the actor across the stage in a two-dimensional flight.
Enter George Kirby, a master stage carpenter, who revolutionised flying effects on stage. Kirby devised routines, supplied equipment and designed a pendulum system that added an extra dimension to the actor’s flight path and more realism to the scene. 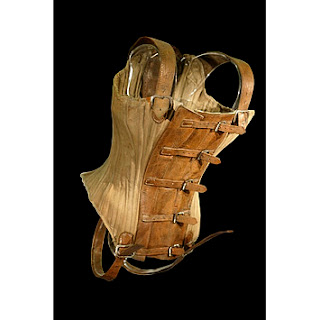 Additionally, in 1889, he designed a new flying harness. It was a kind of corset that could have lines that attached and detached. It was neat enough to be concealed under a costume, could easily be unhooked once the flier had landed and needed far less backstage assistance. There is an example of such a harness in the V&A Theatre Collection.

George would swiftly have registered all his designs at the Patent Office, which may be why the Kirby name survives now.
The new harness was used in the first production of Peter Pan, staged on 27th December 1904  - two years after Victoria's death -   and it brought Kirby notable success.


His flying effect was so realistic there were rumours of children standing feet poised on nursery windowsills, trying to fly off to Neverland.  J.M. Barrie inserted extra lines into his script, informing children – and anxious nursemaids, aunts and parents - that nobody, even the Darling children, could fly without Tinkerbell’s sprinkling of magic fairy dust.
George Kirby must have felt that he had been touched by fairy dust too, especially when soon after, there was a long craze for "flying ballets".  Even now, in theatres, concerts, arenas and stage shows, the artists fly on "Kirby wires".
My novel, A Boy Called M.O.U.S.E, written for older junior readers, is set well before Peter Pan was staged.  Two characters:: Vanya, the backstage mastermind of the Albion Theatre and Nick Tick, a modest genius of a clockmaker, get together. I imagined their brains and skills constructing a design for a new flying apparatus earlier than the real life inventor got his act together - sorry, Mr Kirby! -  and so they were able to bring fame to the Albion’s spectacular production of A Midsummer Nights Dream. My Mouse does fly.
I had however, to leave out my favourite Kirby Flier moment. Research is a long game, and way back when websites were scanned by pedal power, I read an anecdote about George Kirby testing out his new invention. He “flew” a boy - maybe a son? - out over the waters of, I believe, the pool at Bethnal Green Baths. What a scene to write for my boy called Mouse!
The idea was doomed. An editor told me it distracted from the main plot. The manuscript went into a drawer. By the time I got back to the tale, the Kirby website had been redesigned and the information had disappeared.

Even the Bethnal Green Baths building, over whose hygenic waters Kirby’s brave lad flew like a happier Icarus, has now been turned into several expensive apartments. Sometimes fiction gives the better endings.
Did Kirby’s anonymous child have as much fun as the actors "flying" their broomsticks above Hogwarts? I hope so.
A Boy Called M.O.U.S.E now out in paperback from Bloomsbury.
Shortlisted for the Young Quills Award.
www.pennydolan.com
Posted by Penny Dolan at 06:30

Is this where Kirby Grips* come from? To keep your hair from flying away? (I grew up in Canada, where we called them Bobby Pins, for no reason I ever knew.)
A really interesting post - thanks!
*though maybe that's not how it's spelled - I'm not sure I've ever seen it written down!

Fascinating, Penny. I loved all the stuff about flying in MOUSE - and in this post too!

You come across so many fascinating nuggets when doing research, don't you? Thanks, Penny!

Penny... a great post. Just dipped into MOUSE at Charney but I was too distracted at night and my thoughts whirling. Am longing to get to it in a quieter time. The circus high trapeze act was probably the highlight of every year of my childhood. More recently I saw Sarah Brightman in La Luna at the Royal Albert Hall swinging so high she was just about up in the lights. I was totally mesmerized how someone could sing and swing. Trapeze must be some sort of childhood passion that lives with us forever... the feeling of flying is what dreams are made of.

I haven't read MOUSE yet but I'm looking forward to it. I love the theatre and our wonderful New Vic at Stoke often uses flying in their productions - but I doubt they use the corset! Must find out.