Licence to be Extremely Thrilling - by Nicola Morgan 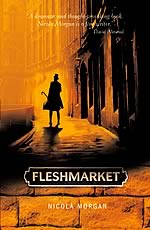 I don't like having to hold back. Don't like boundaries much. But all writers need to work within boundaries, and every genre, every age group, has them. You'd think historical fiction would have tighter boundaries than most. After all, we're constrained by the political or social mores of the times we write about, and have to work within the lack of inventions or technology that the facts give us. I remember the time I really really needed my characters to have a mobile phone and I had to create a convoluted method for them to know each other's whereabouts. Pah!

BUT. The fabulously best thing - in my opinion - about writing historical fiction for young people is that someone like me who likes to take it to the limit, cross the edge, dangle the reader off the precipice of fear and let them contemplate the worst, can do much nastier, crueller, more gruesome, more shocking, things to our characters than we can easily do in contemporary fiction. Why? Because the reader is secure in the knowledge that "it won't happen to me or anyone I know."

So, mastectomy without anaesthetic in front of an audience? Young mother drowned at the stake in front of her daughter? Teenage girl trepanned after drowning? No problem in historical fiction. I've done them all and many writers on this blog have done these things or worse. (OK, perhaps not worse than the beginning of Fleshmarket - may I claim that one?) You've got Celia Rees, Mary Hoffman and Theresa Breslin and many others choosing cruelly troubled times and settings and creating brilliantly real worlds from the past.

Thing is, we all know full well that grotesque cruelty is not confined to the past. The most shocking and unspeakably cruel things happen in many parts of the world today, including in our own country, usually (but not always) outside the personal worlds of our particular readers. I'd like to be able to write about them, too, as I don't think we should be allowed to think that bad things only happened in the foreign country that is the past. So I've written a contemporary novel - about human trafficking, prostitution, rape, drug addict parenting, brutality, murder and torture, and the political aftermath to a genocide that has happened within our lifetime (and for which a man is currently and prominently being tried in a court). It's set now, and here - in London, under our feet. It's called Brutal Eyes and it's my modern Fleshmarket. But I suspect it won't be published. (Unless I do it myself.) It crosses some lines, you see. And it's contemporary. I've gone too far and brought it all too close to home.I know who will like it, but it may not be enough.

It crosses the lines that you can cross in historical fiction without even being questioned. But maybe looking at the horrors beneath our own feet, testing the cracks in the veneer of our civilisation, maybe that's a step too far. After all, it's a thin veneer, isn't it? Especially when you can see it.
Posted by Nicola Morgan at 01:00

"Humankind cannot bear very much reality" (Most readers of this blog will recognise the quote - for anyone who does not it comes from TS Eliot - Burnt Norton.)
I think that might be the problem. In order to be able to cope with life you have to be able to put a distance between yourself and the disaster. I see it all the time with the people I work with. They have to "switch off" in order to cope with what is going in a disaster zone. It is not that they do not care. They are there because they do care but they have to be able to stand back as well or they end up not being any use to those they are trying to help.

But once it is on the news, the shock quickly fades to fatalism, as if it had always been meant to be. "All the signs were there. Anyone could have predicted it." By definition, something in the past is realistic, because not only could it happen, but it did happen. I think historical fiction plays on that subconsious acceptance of the past to create a more believable horror.

Great discussion points - one the advantages of historical settings to create drama is that putting a character in danger doesn't automatically trigger a visit from sixteen social workers!

Most interesting. And I hope BRUTAL EYES...love the punning title!...does get published somewhere somehow. You are a brave crabbit old bat.

I want to read BRUTAL EYES.

You're so right. History somehow puts a plaster over the pain. Maybe we can't take stuff that's too close even when we know it's true. Good luck with BRUTAL EYES

I agree - I'm not sure if it's a bad or a good thing, that we can't always cope with bad things which are too close to home. As someone said, a child drowned in your village pond is a tragedy, a hundred people drowned in China is news... It's human nature - we're wired for small groups.

In which case I think we should celebrate historical fiction for being able to help readers to encounter stuff they'd not be able to handle otherwise, and go places which would be no go areas otherwise...