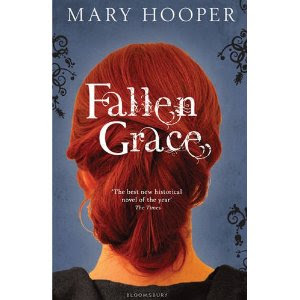 Years ago, when I first started writing, I asked an (unpublished) historical novelist if it was difficult finding out all she needed to know for a book set in, say, the 18th Century, and she answered airily that it wasn’t; she just “put the women in long dresses.”

Hmm. If I’d have done that with FALLEN GRACE (out this month in the UK in paperback) I wouldn’t have had half the fun, because the research unearthed (sorry!) hearsefuls of fascinating stuff about Victorian funeral practices that I could not only use, but which affected, shaped and developed the plot.

For me, research is absolutely the best part of writing a book. I think one of the reasons for this is because there are history-shaped gaps in my education and doing research for whatever book I happen to be writing helps to fill in those gaps. I kill two birds: find out stuff and get material for whatever I’m working on.

The idea for FALLEN GRACE first began with my perhaps slightly odd interest in catacombs, funerals, mausoleums and all the gothic paraphernalia associated with a Victorian death: the glass coffin carriages, the mutes, feathermen and horses with black plumes. I was also captivated by things like the giving of black gloves or jewellery to the chief mourners, the draping of aristocratic hedges and windows in black crepe, the sending of cards inviting one to “accompany the corpse” to its final resting place, and so on.

Mourning wear, too: widows were encouraged to mourn at the very height of fashion and it was regarded as an insult to a man’s memory if his grieving wife chose to have less than the absolute best (ie, most fashionably expensive) in the way of gowns and jewellery. At one time there were three mourning warehouses in Oxford Street ready and willing to despatch their dressmakers across the country and supply everything a grieving family could possibly want in the way of black garments. 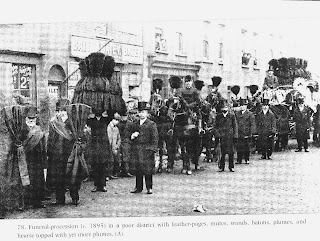 Once I’d absorbed and been fascinated by all these bits of trivia, I had to decide what to do with them. A plot was needed, so I invented a Victorianesque one complete with a tragic heroine, two wicked scoundrels in top hats, a lost baby, a secret inheritance and a love that dared not speak its name (no, not in that sort of way, but between different classes). I also wanted a real person in my book, and who better than Charles Dickens, who had been known to abhor undertakers, saying they were “dealers in death”?

Dickens (after I had ensured that he was in London at the time I wanted him to be) was duly added to the mix, and it was then, when I was still researching and trying to tie everything together, that I discovered the Necropolis Railway, that rather marvellous steam train which ran from Waterloo to Brookwood, taking mourners and their coffins first, second or third class to be buried in leafy Surrey.

So, I began FALLEN GRACE with my main character getting on the steam train with a “precious bundle” under her arm and the book came to its climax 250 or so pages later in the coffin depository which used to be part of Waterloo station. The train was the final link that I needed to pull together all the different elements and was an essential and valuable part of the plot. I’d never have discovered it if I’d been content to “put the women into long dresses.”

Watch a trailer for the book here.
Posted by Mary Hooper at 01:00

Fallen Grace is a lovely book Mary - and Velvet looks beautiful too. If you haven't read Mourning Dress; A Costume and Social History by Lou Taylor. It is one of my all time favourite books.

I can't wait to read this book. The dark and gothic intrigues me too; I'm currently researching medieval piety and reading about 'poor men' being paid to be mourners at funerals and given black robes for the purpose... How intriguing to hear about the Victorian equivalent. And I didn't know that Dickens took such a dim view of undertakers... it makes me think of Oliver Twist miserably bedding down for the night amongst all the coffins in Mr Sowerberry's shop... What a great post - many thanks.

Fallen Grace was one of my favourite books of last year and I hope the pbk does really well, Mary! Loved reading this post.

Fascinating post, and I'm certainly getting this book! That's really interesting about Dickens in particular. I think Joram and Omer in 'David Copperfield' are quite sympathetic, but there's still the same horror there, the same image of the innocent child side by side with the coffins.

I'm sure you've read the fantastic 'The Mourning Emporium' by Michelle Lovric, but if anyone hasn't, that taps into the same Victorian obsession and has a magnificently Dickensian feel.

And... has it occurred to anyone else how many of the History Girls have a sinister obsession with death? An occupational hazard, perhaps?

I loved this book when I read it last year. Absolutely fascinating details with a wonderful storyline.

I really enjoyed the book, and it's fascinating to read how it came about.

Fallen Grace is a great read and if you've not yet read the book then I'd definitely recommend it.

I hadn't heard of the Necropolis railway until earlier this year when I came across Andrew Martin's "The Necropolis Railway" Jim Stringer novel. I wonder how many other books it features in?