A SOURCE OF INSPIRATION by Adèle Geras 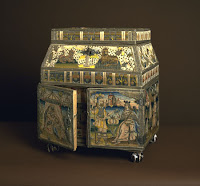 This is Hannah Smith’s Casket. I fell in love with it when I first saw it at the Whitworth Art Gallery in 1967 and it’s been on my mind often since then. The casket was made in the 1640s during the English Civil War,(and finished in the 1650s) by a young girl staying in Oxford which was at the time a Royalist stronghold. What struck me most forcibly was not the beauty of the embroidery, the seed pearls and the luminous, pale colours; the allegorical figures and beautifully-worked details, but the fact that Hannah Smith had hidden a message within it.

You know the kind of thing. Who hasn’t, as a child, buried something in a box in the garden in case aliens came and wanted to know about us? It’s the Time Capsule concept, which has now acquired grown-up status. To see Hannah doing the same thing exactly in 1656 was thrilling: one of those moments when you realize that, give or take certain differences to do with stages of development and the passage of time, human beings have always been just what they are now, with the same hopes, desires, needs, and preoccupations no matter when they lived.

Hannah’s message reads: The yere of our Lord being 1657 if ever I have any thoughts about the time when I went to Oxford, as it may be I may, when I have forgotten the time, to satisfi my self, I may look in this paper and find it. I went to Oxford in the yere of 1644 and my being there 2 yeres….and I was almost 12 years of age when I went and made an end of my cabinette at Oxford…and my cabinette was made up in the yere of 1656 at London. I have written this to satisfi my self and those that shall inquir about it. Hannah Smith.

Very soon after I started writing in 1976, I turned to Hannah Smith for inspiration. I wrote an Antelope book for Hamish Hamilton. [Anyone writing for children in the Seventies will remember Antelopes and their younger versions, which were called Gazelles. They were series for young readers published by Hamish Hamilton, and illustrated with line drawings. Antelopes were about 9000 words long; Gazelles about 2000.] My story was set during the English Civil War. In it, Hannah is a young girl staying with a relative in Oxford. She becomes a kind of nurse to a wounded Royalist soldier and of course falls in love with him. It was turned down and never published.

In 1987, I used the same story as the basis for a play, which I entered for a competition run by the Royal Exchange Theatre in Manchester. This fared better and was chosen by Rosalind Knight to be performed at the theatre as a Rehearsed Reading for one night only. I regard that evening as one of the highlights of my career. It was an amazing experience to see my words acted out before me and a measure of how good the cast was that within minutes I’d quite forgotten that this was my play and was caught up with the drama as though it had been written by someone else. It’s never been performed again.

In 1989, Hannah Smith and her casket appeared in a poem sequence called Needleworks. I’ll end with a short quotation from that, but it’s now more than 20 years since the story has cropped up in something I’ve written. Maybe it’s time to turn my mind to Hannah Smith once again.

“The soldier left our house.
I embroidered long weeks:
every thread a vein
every pearl a tear
every stitch a sorrow
every needle a small dagger
drawing blood.

I have written this to satisfy my self
and those that shall inquir about it.
Hannah Smith.
Posted by adele at 08:00

I'm fascinated by the idea of this message. I can see a story unfolding two time periods. Adele, you should develop this! You'd do it beautifully.

Thanks, Anne. It's always in the back of my mind!

And oh, the power of words to brush aside eternity!

That is true, Sally and most poetically put!

This most wonderfully describes how an object can haunt the memory & mind! Lovely post and quotes - both Hannah's letter and your poem.

Was all set to look for the Whitworth Gallery when passing through Oxford soon, but have now found it's in Manchester, so slightly nearer home.

A lovely story and a beautiful object. Thanks, Adele.

Wonderful! And so very much a human obsession, as Sally says, using words to preserve time.

I've always been fascinated and haunted by the papers the Bronte sisters wrote for their future selves to read. Can't quote from memory, but Emily's written sitting in the kitchen watching Tabby cook, and hoping that in ten years time they will all be happy and comfortable and together under the same roof. But of course, it didn't happen that way...

It is indeed a beautiful object and a lovely meditation, Adèle!

I'd love to know why Hannah was in Oxford, and how her casket came to be in a Manchester museum. What a fascinating piece. Thank you Adele.

What a beautiful and compelling object - a message in a bottle from the past. A lovely post to start the day.

Adele, this made me cry - because of the girl Hannah then, and also the way you as a writer have been attached to her. It reminds me a little of Joan Aiken - do you remember Smoke from Cromwell's Time? Or The Children of Green Knowe- Lucy Boston. PLEASE write more about Hannah.
-- Louisa

I might well, Louisa after your message and those from other people! Thanks, everyone!

This is great, Adele, and fascinating! Thank you.

I love the idea of finding a hidden message from an earlier era. As a child when my dad was stripping wallpaper I'd always go and write something on the bare walls, hoping I'd get to read it again the next time the room was decorated. 35 years later, decorating my current house we found similar childish scribbles under the wallpaper in one room.