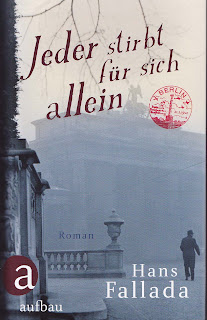 I first read this book in German, when I was researching Last Train from Kummersdorf, and it made a huge impact on me. I was startled, but not at all surprised, when the translation burst on the international scene the year before last and became a best-seller.

But now it appears that the version I read, the one that has been so widely translated, is not the full version; it was subject to editorial cuts after Fallada's death, and the German Aufbau Verlag - the publishing house that originally brought the novel out - has discovered the unexpurgated version in its archive and published it. Aufbau Verlag was then a Russian-zone publishing house. The name means 'Reconstruction Press.'

Actually - as the German afterword tells me - it's a wonder that this novel got published at all. The original response from the publisher's reader is stupidly negative, and it's dreadful to think that Fallada had to endure it when he was already dying. There is no middle stratum in this novel, the reader said; the characters are either all good or all bad; the Persicke family are over the top; the characters are unconvincing; too many coincidences - and historical inaccuracies - and anyway, it's 'a novel of pimps with a political veneer.'

Fallada was never well enough to discuss this with Kurt Wilhelm, the publisher at Aufbau Verlag. He knew that he'd written one of his best works; it's to be hoped that he managed to remember that in the midst of the nightmare (Fallada's expression) that the reader's report was to him. And the novel did get published - but cuts were made.

One of those cuts (which has actually been reversed in the translation) was to suppress the fact that the postwoman Eva Kluge was a Party member. Also, for some reason, the character originally called Barkhausen was renamed Borkhausen - and there are a few editings that were seriously needed - such as the section where Enno Kluge and Barkhausen ransack poor Frau Rosenthal's flat which goes on forever in the uncut version.

Another character who has had some grey tones removed from his personality is Judge Fromm, who tries and fails to shelter Frau Rosenthal, at the beginning of the novel. Wiegler scissored out his admission to Frau Rosenthal that he was known as 'the bloody Fromm,' or 'the hanging judge Fromm.' This casts another, more sinister light on his cold passion for justice - and his coldness is one of the things that prevent him from saving Frau Rosenthal's life.

But to me the most significant issue is that the best part of a whole chapter vanished, because the desk editor cancelled Anna Quangels membership of the Nazi Frauenschaft (the Women's Organisation.) The Frauenschaft, in wartime, carried out many WI-type jobs, running courses for housewives on how to cook a good meal on rations, how to bottle fruit and vegetables safely and to make and make over clothes. But the crucial role of the Frauenschaft was described in its founding statement as 'the National Socialist indoctrination of German women.' It was members of the Frauenschaft who made punitive descents on my grandmother in 1933-34, when my grandfather, a Social Democrat policeman, was fighting for his job and for his life. They would turn the house over, inspect the books on the shelves, make insulting comments on my grandmother's housekeeping, and tell her she was scum and would end up in concentration camp.

The original Chapter 17 relates how Anna got herself out of this noissome organisation.

At the risk of spoiling it for anyone who wants to read the complete version; she achieves it by harassing - in her capacity as a 'Frauenschaft' functionary - the wife of an SS man who is evading war work. She is, of course, not meant to trouble such 'ladies.' The woman then does as Anna intended and kicks up such a stink that it ends with Anna's ejection from the Frauenschaft. It's a wonderful piece of writing, full of black humour, and it is a shame to miss it.

But it's inaccurate, historically, since women weren't called up for war work in Germany in 1940, this didn't happen till 1943. At which time many middle-class women did slip out of war work by getting doctors to certify them unfit, and the wives of Nazi high-ups of course wriggled out of the call-up. Fallada explains to the reader that at that stage slave labourers hadn't been imported from the occupied countries to work in factories. Quite true, but in 1940 the slave labour was being done by Jews, who worked themselves into the ground, knowing that if they didn't they'd disappear eastwards.

Whether this matters is an interesting question. I'm aware that I've breathed smoke and flames about the divagations from historical probability of books like 'The Boy in the Striped Pyjamas.' But the slip in the timing really doesn’t affect the quality of Fallada's fiction or, more importantly, the sense of the era that it conveys. As Kath Langrish has already said in this blog, many writers try to get the history right, but we don't always succeed. (Nor do historians, but I shan't start on that). 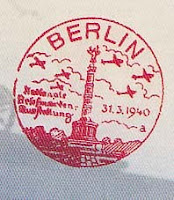 In all zones of occupation at the time, denazification was taking place, which meant that people who'd held Party membership were deemed ineligible for important jobs - unless they had a pretty good excuse or were particularly useful to the new political masters. (Later, of course, many of them got back into high positions). But in the Russian zone, history was being rewritten at the same time. Aufbau's political masters wanted heroic resisters to Nazi oppression, preferably working-class and communist if possible. So Eva and Anna were brought into line.

But Fallada, who himself had tried not particularly successfully to survive as a writer under Nazism, didn't ever regard himself as 'clean' - even though he'd also taken some risks that could have proved fatal to him. His intention in writing the novel was to depict the Quangels as 'Mitläufer' - ie people who went along with Nazism - who freed themselves from this position.

In doing so, as both versions of the novel recount, Otto and Anna grow to fully comprehend the many crimes of the Nazi regime, including the persecution of the Jews, which previously haven't bothered them so much. So it is important that Anna Quangel has belonged to the Frauenschaft, and ironic that in removing that part of her history the editor did actually remove some of that 'middle stratum' whose absence the reader bemoaned.

Ironically, too, the regime under whose auspices the novel was first published perpetuated many of the horrors described in the novel; the surveillance state, the informer culture, the imprisonment and torture of dissidents, and the distortion of the truth. That being so, it is wonderful that this brilliant and deeply honest work managed to be published almost unscathed.
Posted by Leslie Wilson at 08:00

Really interesting post about a wonderful book. How interesting that it has been restored to the writer's cut.

But title is changed, isn't it? Why? My German isn't good ... Everyone Dies for Himself in Berlin???? seems like a great title for this book. Please tell us about that too.

Sorry, I meant 'Everyone dies for himself alone'?

What a fascinating post. I must admit, to my shame, that I haven't read this book - but I must. It puts me - in my ignorance - in mind of a few things I read long ago by Czech writers who of course endured both Nazi and Communist oppression too... The Engineer of Human Souls by Josef Skvorecky made a massive impression on me, but - oh, for a better memory! - I can't recall it well enough. I must revisit it - and visit Hans Fallada for the first time, too.

It's more: 'Everyone dies alone.' I agree, it is a better title, but I suppose the British publishers wanted to make it clear, at once, that the novel is set in Berlin - and given the popularity of Berlin at present, this is a draw, probably. What intrigues me is that the jacket image is identical in the paperback English version and the Aufbau version. Maybe they belong to the same publishing empire..

Has the Josef Skvorecky novel been translated? I'd love to read it.

Fascinating post and here are two more relevant great reads for younger readers which may be of interest - to add to the ever growing book list that the Blogs are creating. "No shelter" by Elizabeth Lutzeier and "A Candle in the Dark" a splendid book by Adele Geras.

Fallada's novel really opened my eyes to an aspect of German history I knew so little about. How interesting to read about the editorial changes. As you say, how wonderful that the novel got published unscathed. It makes you wonder how many great works have been destroyed before they ever saw the light of day.

Fascinating post about a book that had me entirely enthralled when I read it last year.

Engineer of Human Souls is a wonderful book, but much more cheerful than Fallada.

Well, of course I have written, for young adults, about the less grim side, in Last Train from Kummersdorf and Saving Rafael. And the stories I tell there are based on real events, too. If anyone wants to read further about grassroots resistance to Hitler, they should read Bernt Engelmann's In Hitler's Germany, probably out of print now, but I'm sure you can get it. But I can remember my mother saying: 'Nobody could do anything to resist Hitler' and it's true that political resistance was ground in the mills of a remorseless and manipulative machine. But saving a few lives was another act of resistance, and one that many people did carry out in Germany, as elsewhere. A minority, but an important one.

I wish my German were good enough to allow me to read in the original. I still think that Malefice is one of the best books you have written.

So glad to hear from someone who likes Malefice! Odd how many people remember it, though it's been OP for ages. But it may have an electronic resurrection, and NOT through the medium of Google pirates.. watch this space