From the Sketchbook: Exploration 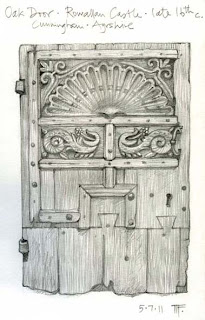 A few days ago, I went to the National Museum of Scotland in Edinburgh with the intention of drawing the precious Monymusk Reliquary, but found myself exploring the Kingdom of the Scots collection, looking for another object to attract me. The reliquary’s showcase sits in the middle of a rushing stream of visitors, which is not conducive to sketching.

In a quieter room, this late sixteenth-century century oak door from Rowallan Castle in Ayrshire caught my eye. I spent the next two hours sitting on a bench nearby, recording every bolt and crack. I got caught up in its carved spirals and semi-circular “sunrise” motif. While I worked, I wondered about the craftsmen who had made it. I thought about the power of this fortified door and wondered what it had let in – and kept out – over the centuries.

When the museum was about to close, I was exhilarated. I’d managed to “capture” the door just in time and add it to my collection of visual inspirations. It may surface, reimagined, in a future book. But at the very least, when I look back at this sketch, even years from now, it will call up the sensations of being in that gallery, with its echoing voices in the background and curious visitors sneaking a look.

This sort of visual research feeds straight into my historical fantasy novels for young people. I came to writing through a side door. I had been illustrating for children’s publishers and other clients, drawing everything from seventeenth-century pistols to World War I airplanes, from Native American chieftains to Roman citizens, from Arctic foxes to kelpies. After years of collecting reference materials, my studio bookcase is filled with books about costume, nature, weapons and transport. I have a filing cabinet that contains the remains of my “morgue”, an organised collection of images clipped from magazines and brochures over many years.

Five years ago, out of the blue, I began to write a novel. I didn’t know what I was doing, or why. I was supposed to be working on picture book manuscripts that I would also illustrate. But suddenly I had what Tim Bowler calls “a whisper in the head” and I had to follow it. The bones of this story, which became The Blackhope Enigma, came straight from my own passions and visual inspirations: labyrinths and mazes, Renaissance paintings, Scottish tower houses. Its main characters are art-crazy teenagers; we first meet them as they sit on a bench in a castle copying a notorious painting into their sketchbooks.

Working on The Blackhope Enigma took me down esoteric avenues. I nearly got lost exploring astral magic, the art of memory, Hermetic philosophy and Renaissance painting techniques. But eventually I had to step back and weave some of this new knowledge into my story, where appropriate.

I couldn’t wait to explore again for my second book, The Crimson Shard, a sequel that grew organically out of the first. The initial spark was my interest in trompe l’oeil murals, but this project also took me into eighteenth-century houses in London, the Georgian-era underworld, the technical aspects of forging artworks and most intriguingly, the connection between alchemy and paint pigments. All of these connect to one object at the centre of the story: a door with extraordinary power.

What a breath-taking piece of artwork, Teresa! It's beautiful.

Your post has made me realise how important the VISUAL world is to us historical fiction writers. Of course we long to smell, taste, touch and hear the past, but most of all we long to to SEE it.

Is that the same for all of us, I wonder?

Thank you, Caroline, for posing that question! I'd love to know how others feel about the importance of the visual world.

I find the visual world very important. It's interesting, actually; I've just recently started to do a bit of drawing again - I used to draw - but I saw that as displacement activity; interesting to think that I could use it, a little bit in the way that you do. I certainly find that places are very important for getting me into my stories; some places have such atmosphere - you can almost hear the stories calling out to be heard.

And I wonder what that craftsman would think to see you and the other visitors admiring his work in the fancy surroundings of a museum! Reminds me a bit of the fab Dr Who episode when the doctor brings Van Gogh forward in time to see his museum in Amsterdam...

Thank you for your beautiful sketch and post. I sometimes feel the act of drawing is a way of meditating on an object, getting to know and understand the thing and - almost - hear what it's saying. (Even happier that I bought a pocket sketch book yesterday now.)